Ring of Steall.gpx Open full screen  NB: Walkhighlands is not responsible for the accuracy of gpx files in users posts
Today was to herald the arrival of less sunny weather. When I set off from the car park at the bridge near Polldubh in Glen Nevis it was bright enough, but the low cloud didn’t look promising. Ah well, I had had 6 days of the most exceptional weather, so must not grumble. I just hoped that my quest for the Ring of Steall wouldn’t be scuppered by the weather. The Devil’s Ridge would be my first foray into walking along narrow ridges and an opportunity to find out whether I’ve got a head for heights. Handy to know, as I’d planned the CMD arête for tomorrow. So an exciting day ahead.

The walk in on tarmac was a nice warm up. Plenty of cars and bikes coming past too. The ‘Enter And Be Doomed’ sign at the start of the path through the Nevis Gorge didn’t seem to have had any effect, judging by the number of vehicles in the car park.
I love this gorge! The rocky path, knobbly tree roots and the river thundering below. Magical. It is almost an initiation rite before you are deemed worthy of entering the lovely pastures of the Steall meadow. I remember ‘discovering’ the meadow a few years ago. It was like finding a treasure. Today I knew what was awaiting me and it was just as beautiful as the first time. 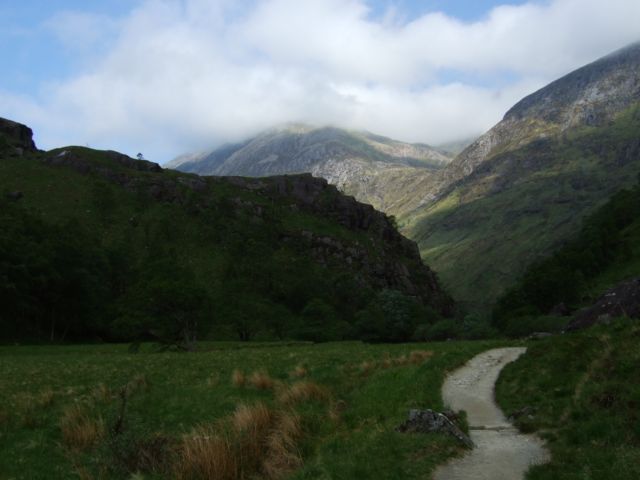 The quest continued with a test of bravoury: the wire bridge. Taken on by many valiant souls before me. However, I am a practical person: the water in the river was low… there were stepping stones…. I was across in seconds. Onwards to the Falls of Steall. This was a less straightforward crossing. The rock slabs were incredibly slippery. After a few unlucky attempts the river finally got forded. Then a squelchy hop-skip-jump through a boggy section and I had arrived at the start of the ascent. First up a very eroded trench. Then zigzagging up easier steep ground, with the final zag clinging on to the hill side, before reaching the north ridge of An Gearanach for a few metres of flat ground. After that the steep climb continued, with the incline leveling off and then steepening again to the summit of An Gearanach. All the while the view down had been sunny, but with the cloud base being around summit height, this would roughly be the theme for the day. Sunny glens, misty tops, views whilst descending, head in the cloud whilst climbing. 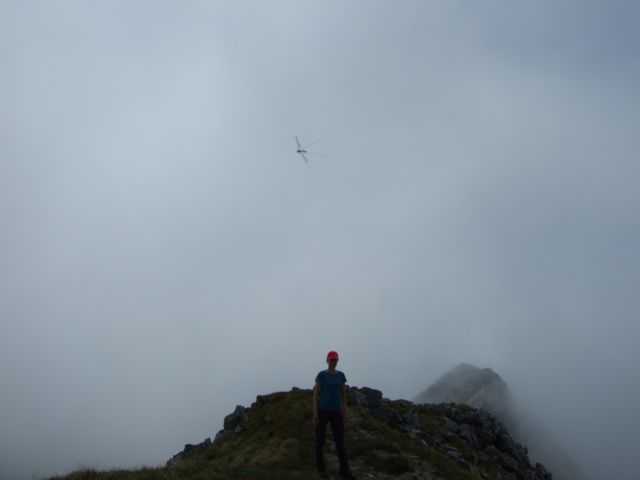 An Garbhanach was partly hidden in clouds, which made it look impressive. Close by it looked quite a bit smaller, but daunting nevertheless: very rocky, pointy and sharp. However, the climb is very short and leads to a nice narrow ridge. I was about to congratulate myself, when I looked down the south ridge. Ah, there is a bit more to An Garbhanach then…. 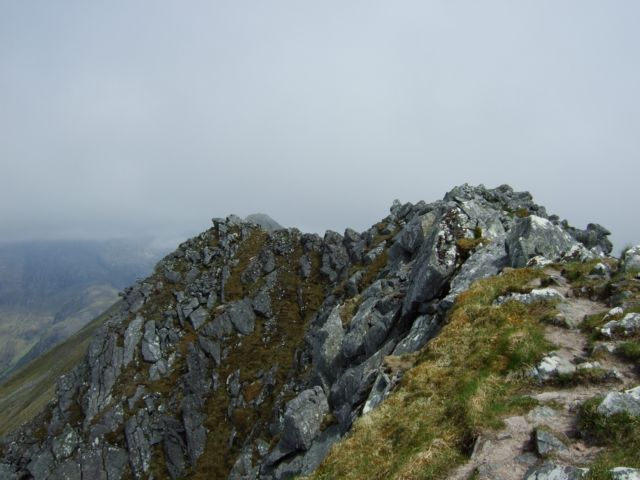 An Garbhanach sting in the tail

Once down on the bealach, the path to Stob Coire a’ Chairn was straightforward. Just a short steep ascent. It took a little less than half an hour to get to this hill from An Garbhanach, not bad going. It was great to still get some views, even though they were a bit cloudy. 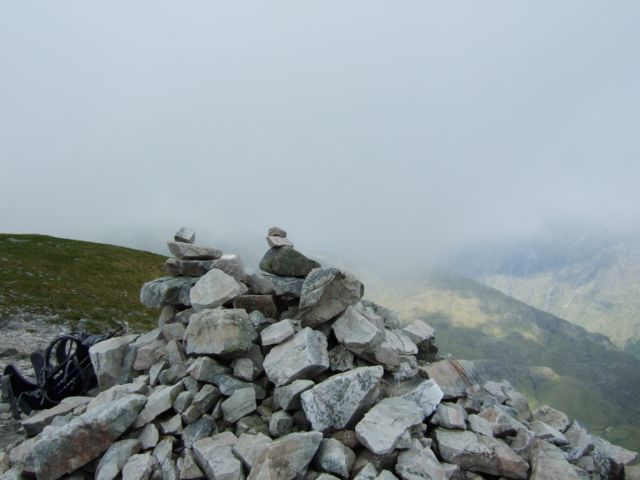 Ridge between Am Bodach to Sgurr and Iubhair 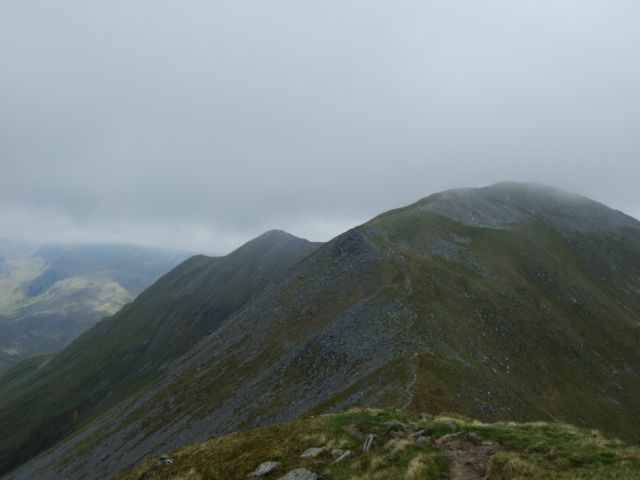 Stob Coire a' Chairn and An Gearanach 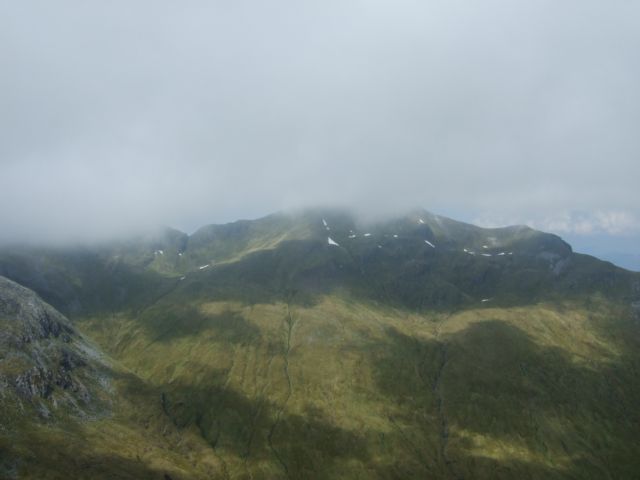 Onwards to Am Bodach. It was all a rather leisurely amble along the ridge, until the 831m bealach was hit and the lower slopes of Am Bodach loomed up. Right, put away the walking poles and roll up the sleeves. I’m not sure whether I picked the easiest route up, but it was definitely fun. And the reward on the summit was: an utterly amazing lack of stunning views. 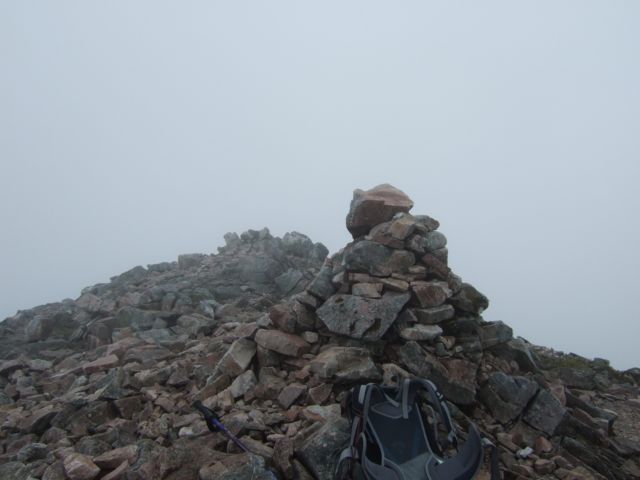 I sat down for a bite to eat and then continued my way down west. Out of habit I took a compass bearing and was slightly confused. The needle pointed in the wrong direction! Then it dawned on me that I was about to walk back to Stob Coire a’ Chairn…. Ah, the cunning Old Man was trying to trick me! A reminder that it’s easy to get it wrong in poor visibility when everything looks the same.
With the nose now pointing in the right direction I headed down the west ridge towards Sgurr an Iubhair, with that strange mix of anticipation and trepidation. The Devil’s Ridge was getting closer….
The view of Stob Ban from Sgurr and Iubhair provided some distraction. What a majestic hill! It was veiled in thin cloud and its quartzite rock sparkled like silver in the sunlight. 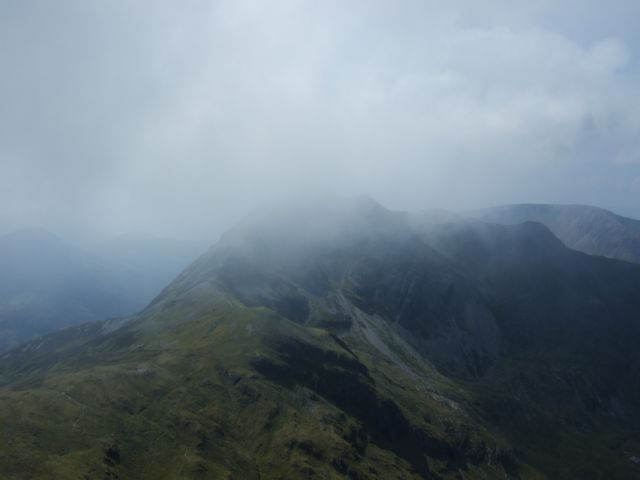 A bit more relaxed I started towards the Devil’s Ridge. The bulk of Sgurr an Iubhair eased me onto it gently along nice broad slopes.
It was airy, but not scary, maybe helped by the cloud. So far so good. 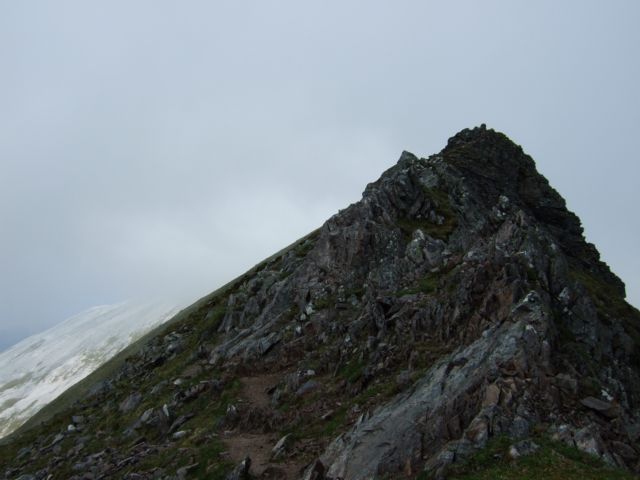 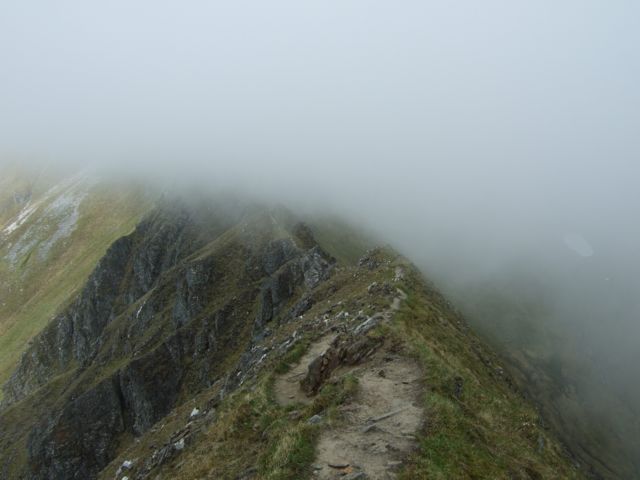 Near Bealach a’ Chip, the lowest point of the ridge, the tricky section didn’t look that bad at first. When I got to the big rock at the centre, I could see the challenge, but wasn’t put off, so climbed on top of it. It was only from this vantage point that I fully appreciated the difficulty of the next move. So I thought the better of it, made a retreat and went down the bypass path.
The bypass path required a step across a small gap, with the ground falling away steeply on the left (just don’t look down), and then an easy scramble back up. It was all good fun. On the other side the ridge continued to be narrow for a short while, then broadened for the climb up Sgurr a’ Mhaim. Wow, that traverse had been very enjoyable! 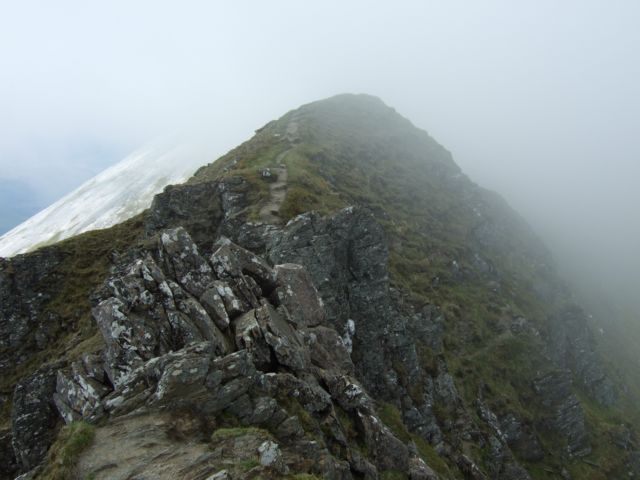 At the tricky bit, looking north Just past the tricky bit, looking south. Bypass path on the right. Looking back south towards the Devil's Ridge

The cloud base had lifted a bit when I arrived at the summit, so there were hazy views towards Stob Ban, the other hills of the Ring of Steall, and of course the Devil’s Ridge, which looked very impressive from here. The ridge had been easier than I’d expected from reading some trip reports. I think the cloud was to thank for that! Nevertheless a good experience which would hopefully help for the CMD arête tomorrow. 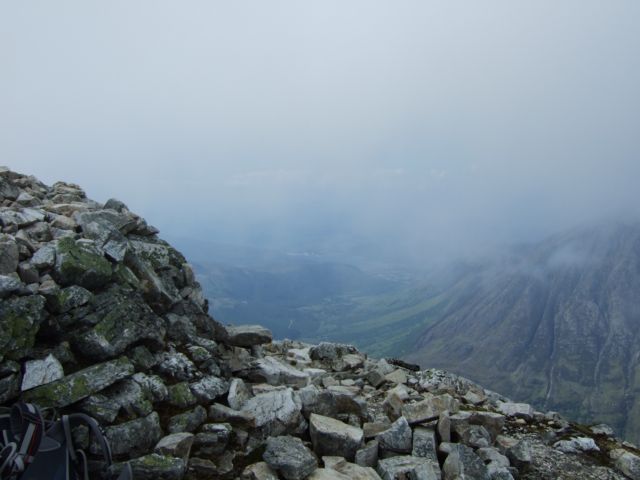 Am Bodach, Sgurr a' Iubhair and the Devil's Ridge

The descent from Sgurr a’ Mhaim back to Glen Nevis was a bit of a trudge. All the excitement was over and I was getting tired. At first the going is a bit rough over quartzite boulders. Then at the fork in the ridge it is on to scree, which actually was very well doable. From Sron Sgur a’ Mhaim the descent became much steeper, slowing me down. But it didn’t matter, I’d had a brilliant day out. CMD arête here I come!

Re: The Ring of Steall

Nice one and an interesting read as well

May have been claggy at times for you......but you saw loads more than me on these hills

Hope to return some time in better weather. Know what you mean about the compass - it's always worrying when you check it and it wants to send you the opposite way to what you think.....then you walk a few yards away and it swings round

Re: The Ring of Steall

Thanks Rockhopper! Yes you definitely win the ‘clag award’ for this trip

, and of course the award for doing all ten in one go regardless

.
On this occasion it was my internal compass which was confused: wandered round the summit, took some pictures, sat down and forgot what direction I had come from.
Now it is just a matter of time before a get on claggy summit, with a confused internal sense of direction and the real compass spinning round due to magnetic rocks. That will be fun!