So as any of you who have read my reports regularly are probably aware, I am a bit of a last minute walker. I check forecasts, look out the window in the morning, and that is me, yes or no.

Today, for some reason I thought it was to be a horrible day, so made no plans what so ever. I had a long lie, and was sat at my computer at 11am, wondering what to do with my day. Just by chance, upon checking the next days forecast, I saw that today was to be very clear. I was furious, that I hadn't planned to go out. Then suddenly thought, why not! Quickly packed my bag, mixed up my meal shakes, and off I went, Crianlarich bound!

On what I maintain is the worse road surface I have ever driven on, the A82 from Tarbert to Crianlarich, I was held up behind all sorts, and the constant weaving to dodge potholes that wouldn't be out of place in the Grand Canyon, making me doubt my decision. I do not like rushing in the hills, but I wanted to get both Ben More and Stob Bineinn.

I parked up at the usual spot, NO CARS at all. I was to be alone. This was the 4 time in 6 months I was to attempt this hill. First time, I was just coming down with what was eventually shingles, the second, rain wind and hail forced me back, and the third, too much snow and ice. So needless to say, I was on a mission. Getting near the summit

Ben More is pretty straightforward in terms of navigation, you basically just keep climbing towards the summit! Having been to within about 100 feet of the summit previously, I was able to mark various landmarks, which i am not sure made it easier or harder. Anyway, I kept SLOGGING on, no other word to describe it, and made the summit. It was worth it! 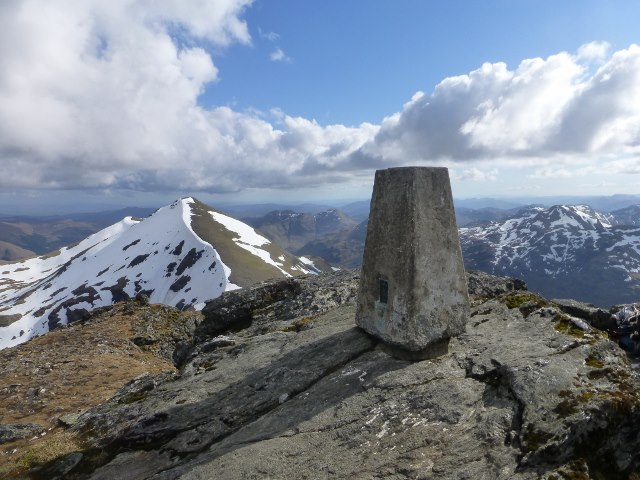 Having thought I was to be alone on the hills, it was of great surprise that a family, or group, of about 8 or 9, were at the summit with me. What entertainment they got when they saw me digging out my pipes. They were very supportive of my mission, and took the opportunity to have a photo with me and my pipes. I am hoping they post it on my page. Tunes at the top

I spent a bit of time on the summit, so many angles for photos, and it really made me want to make more of an effort with photography. I was trying to decide whether to carry on, or bail after one, but as usual, for better or worse, I decided to keep going (3 days on, I am unsure it was wise) 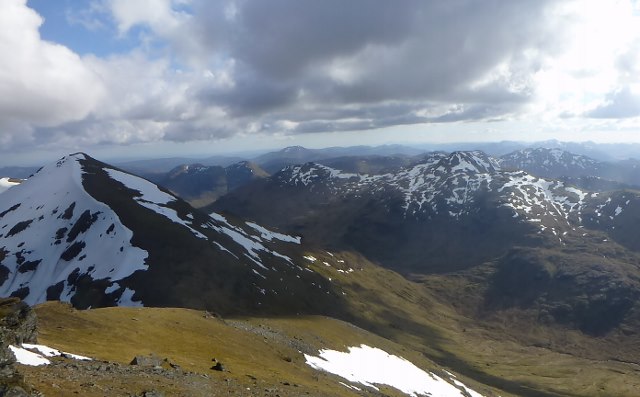 The views were quite stunning all around. Too many photos were taken to put in one little report.

Stob Bineinn , although another slog, was pretty straight forward. There was some unavoidable snow, which didn't merit the effort digging out the crampons, but required a bit of care. Reaching the summit of my second munro was of great satisfaction, as the last 6 months post shingles, have seen my fitness and energy levels plummet, and bagging to Munros in a day, was a huge achievement. 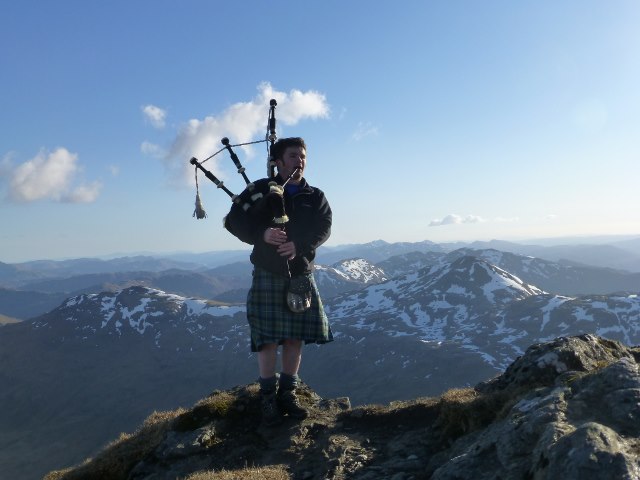 2nd Munro of the day bagpiped

It was on the summit that I got phone signal, and received a text about a meeting I was supposed to be at RIGHT NOW. As I sat staring at the view below, I couldn't care less! It was fantastic to get in the hills again. I had done Ben Lomond a couple of months ago, but that again set me back with my health problems, and led to 6 weeks of not being able to do much. Also, after a pretty stressful couple of days at work, I really got such an amazing sense of freedom. Very little matters as you look for miles over the hills, with the sun setting. Cannot wait to smash more through the summer.

For more details of my charity challenge, where I climb all the Munros, playing the pipes on each summit, for Chest Heart and Stroke Scotland, and Friends of Beatson, follow my social media links on Munro Bagpiper 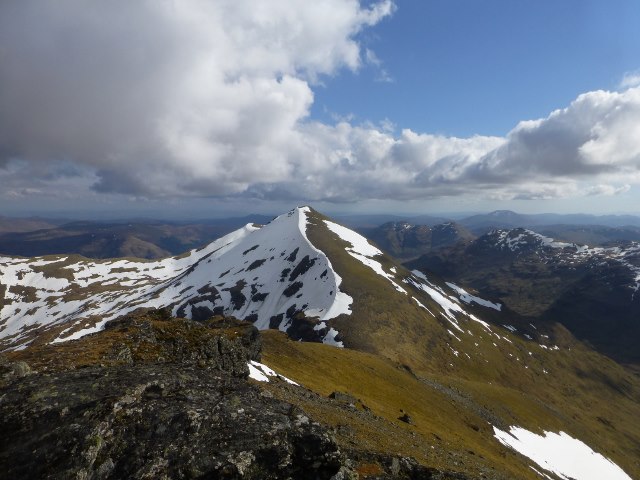 Great pics, love hearing the pipes. Maybe in the near future i'll be ascending the final slopes of a hill and hear you play. That will be a good incentive to hit the summit

Hopefully one day we'll meet up, the thought of pipes on the summit is kind of unique, great report by the way

You are spot on with both the A82 being a pain to drive along, but sadly there are no other options & Ben More being a slog

Superb, great effort munrobagpiper. A couple years ago i came accross a bag piper playing away on the Ptarmigan route on Ben Lomond, was a nice surprise and gives a shiver down the spine. Well played

I too hope that one day I get to greet you and the wonderful sound of the pipes on a munro summit.

Great report and pictures. Would love to hear you on a hill - do you take requests?

Nothing sounds like the pipes on a mountaintop! I was married on a peak here in the US, and my husband played his bagpipes for the ceremony. The next year he fell while climbing another peak with them in his pack, and broke his chanter--probably saved him from breaking his back. He had to buy a new one and have a key made for it because he also lost the last 2 joints on his ring finger when it was smashed by the falling rock that caused him to fall...but that's another story. I hope to hear you play on my next visit to Scotland!

Hello Fife Flyer! I am ever grateful for your bringing me and the Canadian "postie" (sad to say I've forgotten her name) to Schiehallion--what a treat that was!