The hidden side of Ben Wyvis

The hidden side of Ben Wyvis

Ben Wyvis, then. One of the most prominent hills in the NE, yet often disregarded as one of the less interesting Munros. The most popular route from Garbat has been built up into a decent path, and is a pleasant enough route, but not the most inspiring in the area. Anyone who has tried to find an alternative route will have battled endless bogs and peat hags, not to mention fairly long distances.

I tried a route from Glen Glass in April 2008, following the Allt nan Caorach and gaining Glas Leathad Beag from the south. The peat hags on Meall a' Chrimig were extremely tedious, and a white-out on the plateau made me decide not to continue to Ben Wyvis. However on this and another visit that September, I had caught glimpses of the rather impressive Coire Mor, the remote and craggy eastern corrie of Ben Wyvis. This got me to thinking that there must be a route which takes in the most interesting bits of the Wyvis range without too much masochism. Once I included the use of a bike in the plan, a route became obvious.

our_route.gpx Open full screen  NB: Walkhighlands is not responsible for the accuracy of gpx files in users posts
I missed getting out in the amazing weather on Good Friday, but fortunately Sunday was forcast to be good as well. This seemed like a perfect opportunity to give my route a try. The parking spot at the end of Glen Glass is only a 30 minute drive from home, so despite a lie-in and a leisurely brunch in a cafe, I was still on my bike by 12.45. The cycle up to the NW end of Loch Glass was easy, on a well surfaced and only slightly undulating track. Once beyond the forestry plantations, the scenery was stunning, with Meall Mor in particular looking impressive. Very much an underrated glen, this. Half an hours worth of cycling brought me to the rather grand mock Tudor styled Wyvis Lodge. 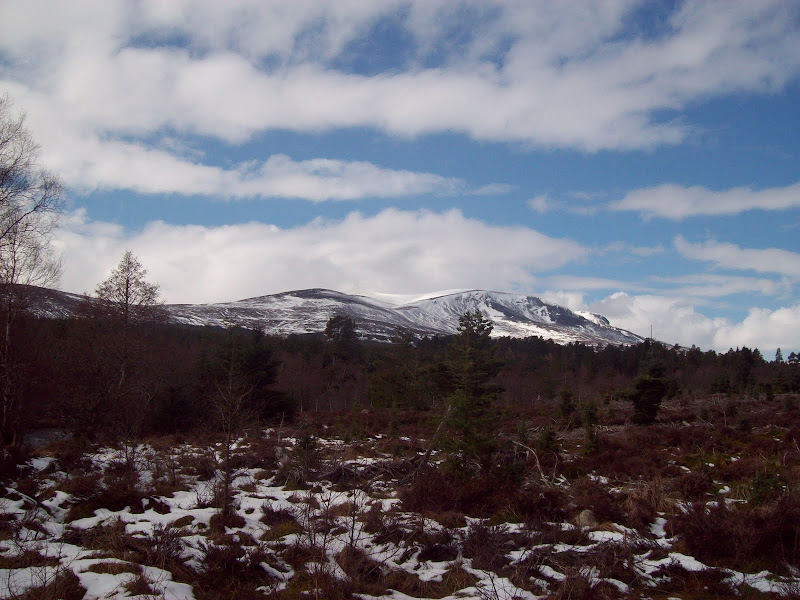 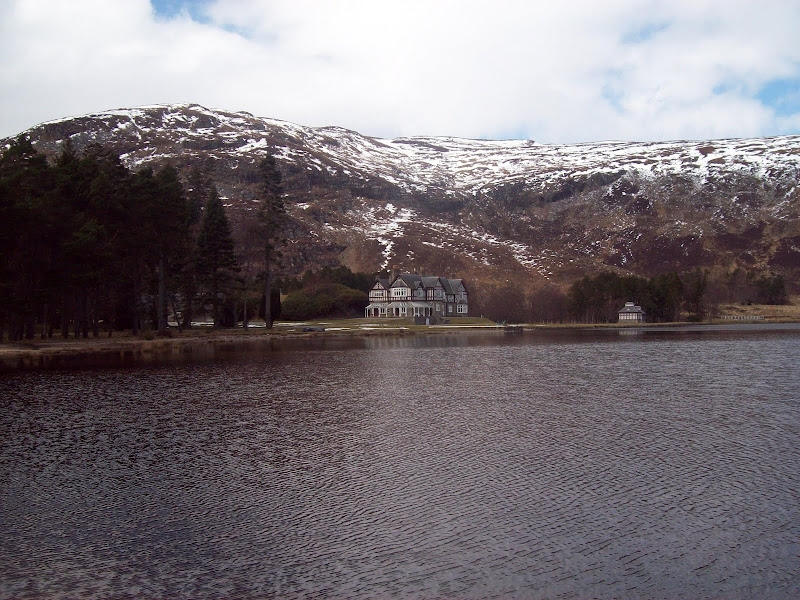 I locked the bike up just before the lodge and headed directly SE towards Fiaclach. The bottom part of the route was rather boggy and hard going trhough the slushy snow, but after crossing a deer fence I found myself on an ATV track. This looked a bit messy, but made the going slightly easier. Above 500m, the wind had scoured the snow away and the heather was much shorter. I made a brief diversion to the summit of Fiachlach for the view, and was on the plateau about an hour after leaving the bike. 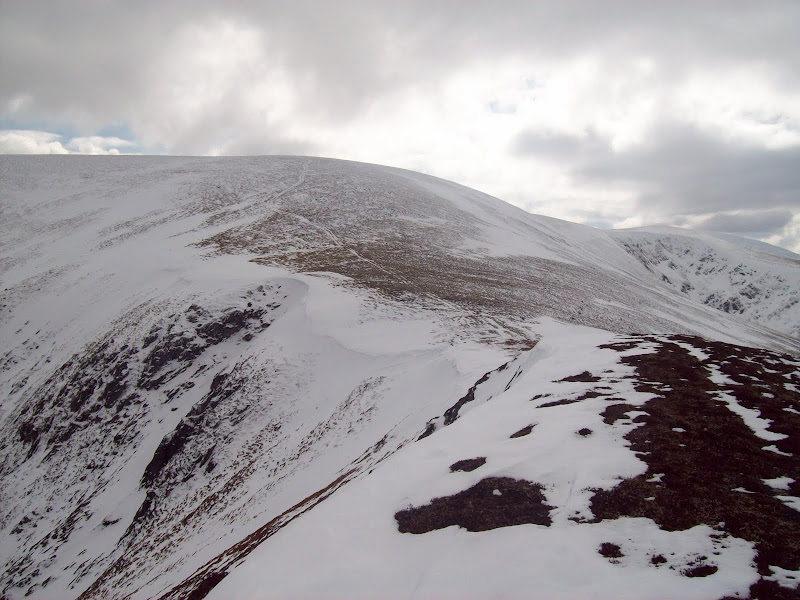 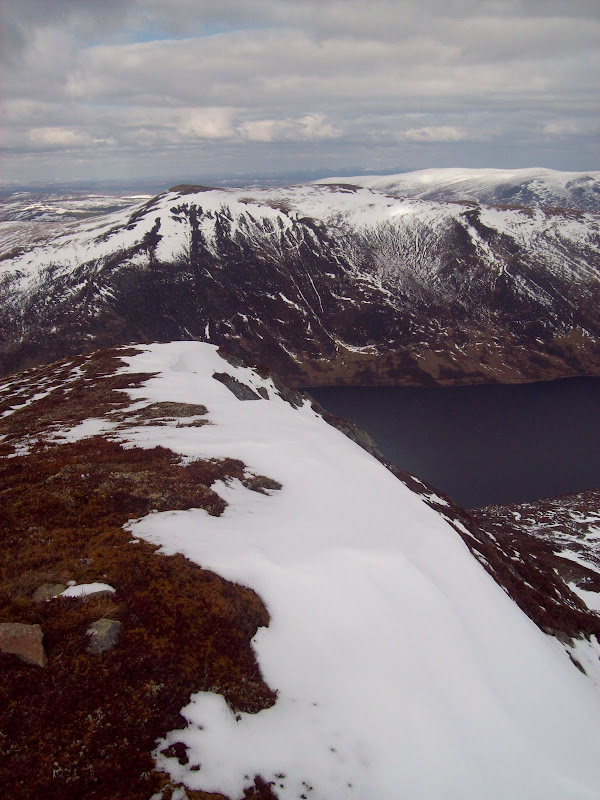 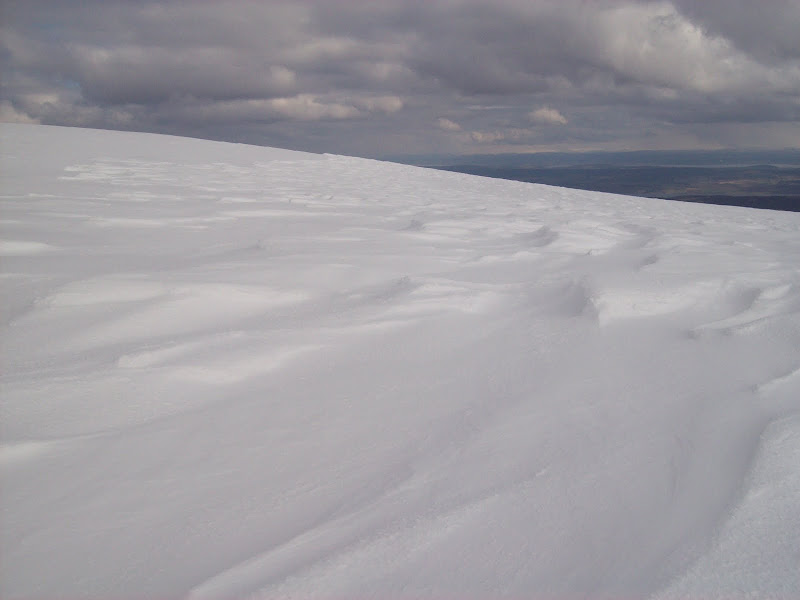 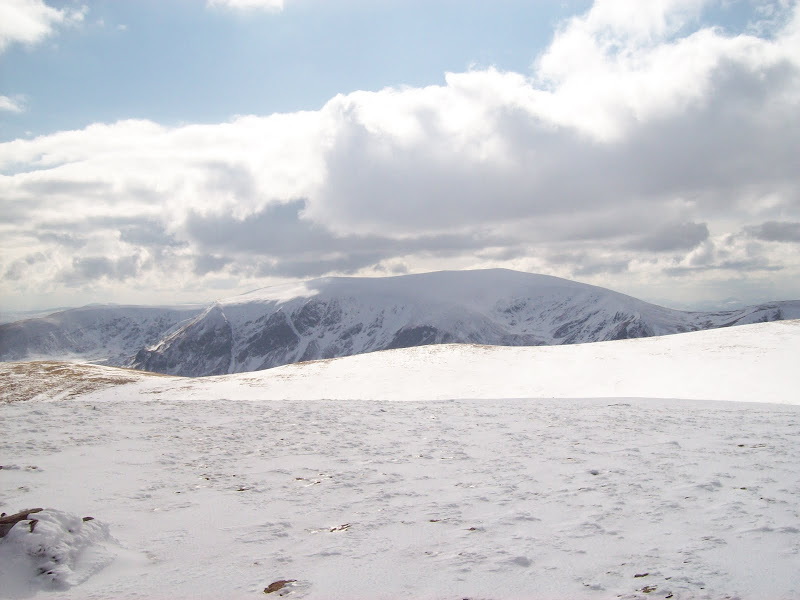 I was somewhat surprised how consolidated the snow was, although Sid's report from Easter Friday had prepared me somewhat. I can only imagine it was a whole lot colder and windier up here through the week than it seemed. There were certainly some interesting patterns in the snow. To get to Tom a Choinnich, I descended SW to get some views into Coire Mor, rather than following the highest ground.

Loch a Choire Mhor and the eastern cliffs of Ben Wyvis: 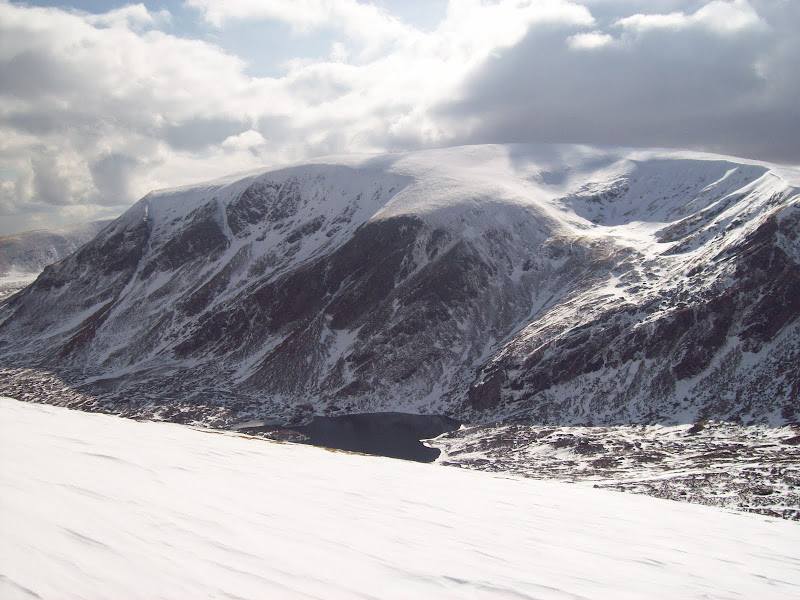 Glas Choire and Tom a Choinnich: 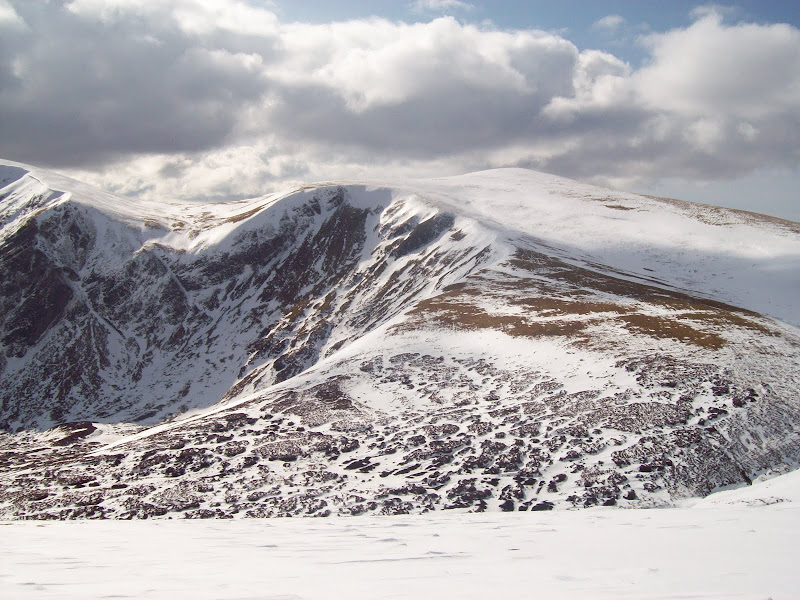 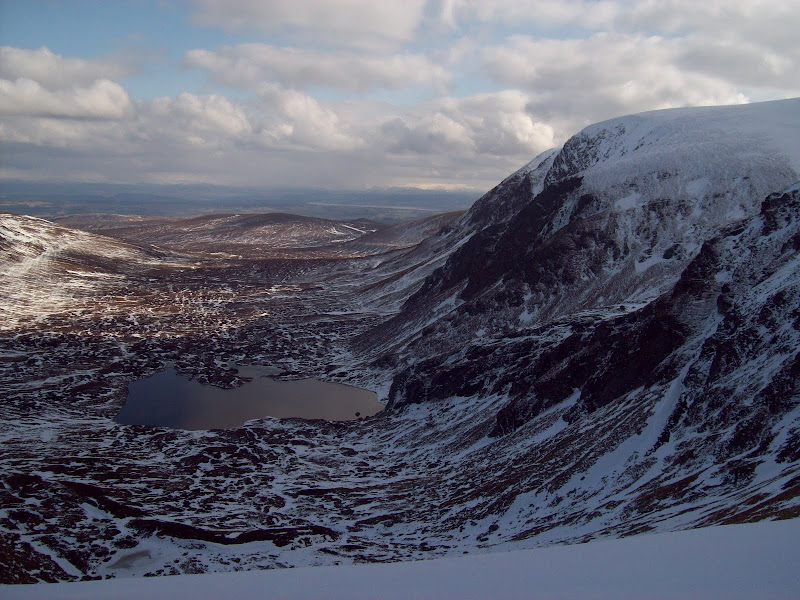 Although this cost me an extra 50m or so of height, the views made it worthwhile. I followed a subsidary NE ridge towards Tom a Choinnich which ran parallel to the main NE ridge. As I was coming back this way, I contoured round the summit and headed straight for Wyvis, moving towards the cliff edge briefly for some views. I reached the summit at about 4.40pm, and was rather surprised to find it empty. There was evidence of plenty of visitors, but I couldn't even see anyone else on the plateau. Their loss, as the views were well worth it. Although this was my 4th visit to the summit, it was the first where I was able to truly appreciate the views. While the panoramas to the W were typical of most hills in the area (taking in everything from the Affic hills to Ben Klibreck), looking back over the Black Isle to Inverness was a treat, with a patchwork of fields broken by the Cromarty Firth.

Platforms in the Cromarty Firth: 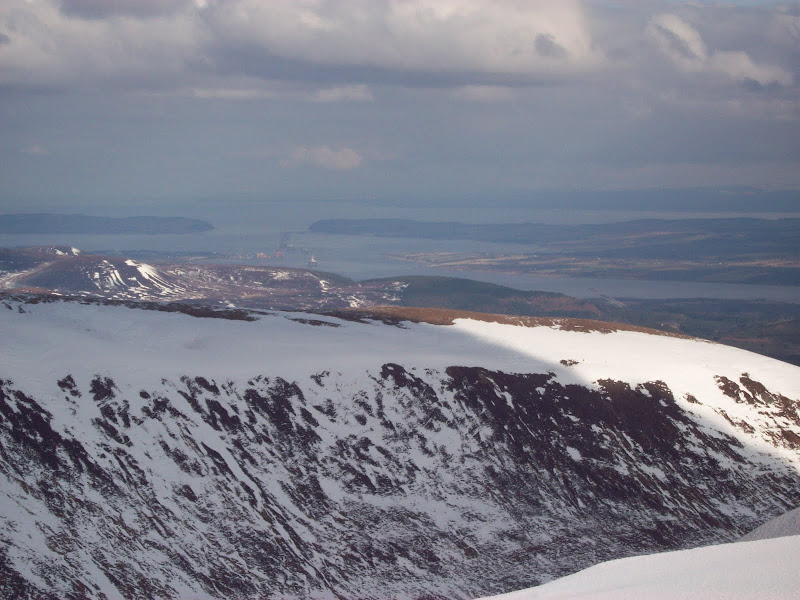 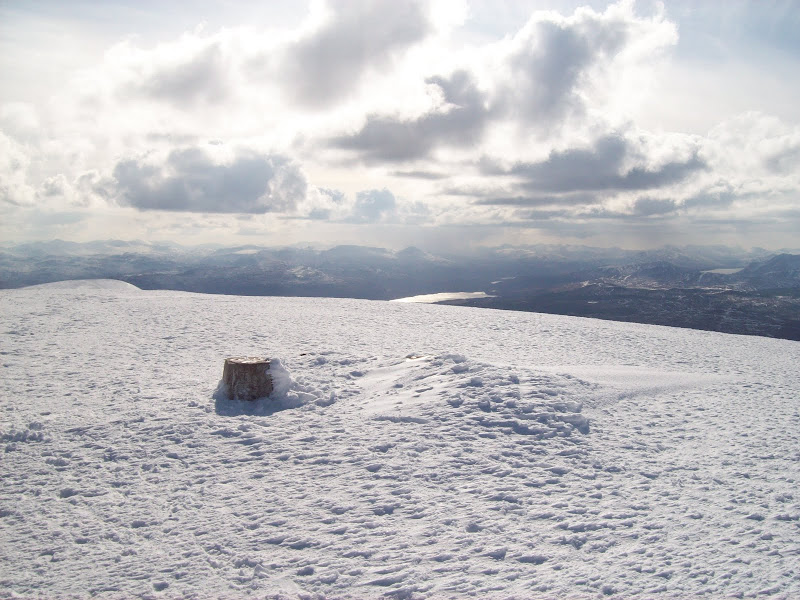 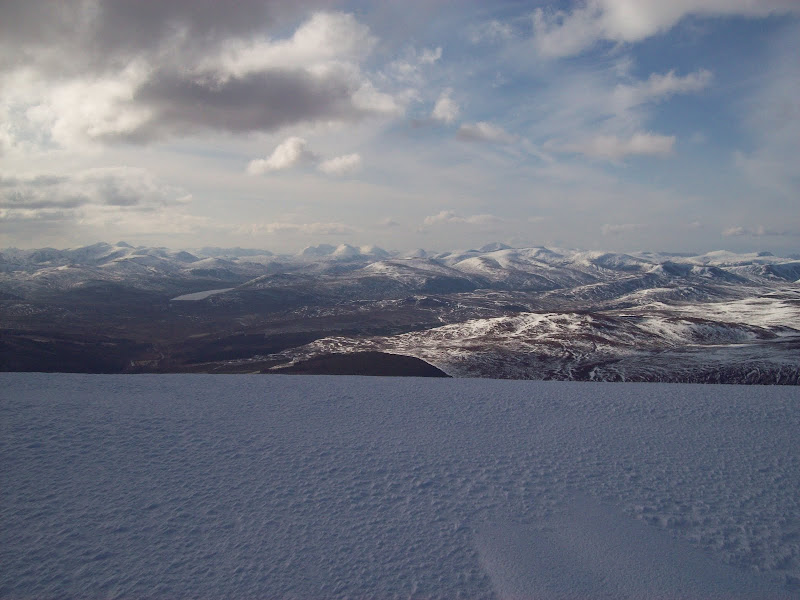 SW to Torridon and Strathcarron: 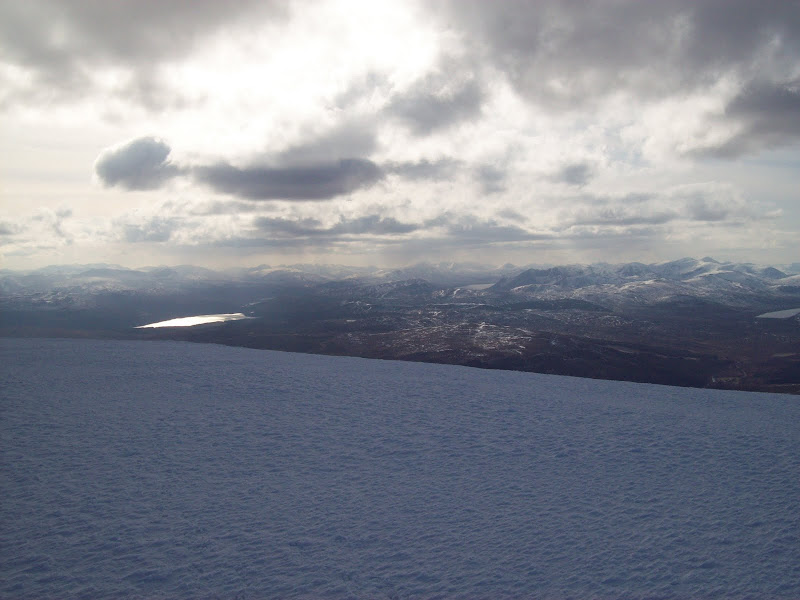 An Teallach and Beinn Dearg: 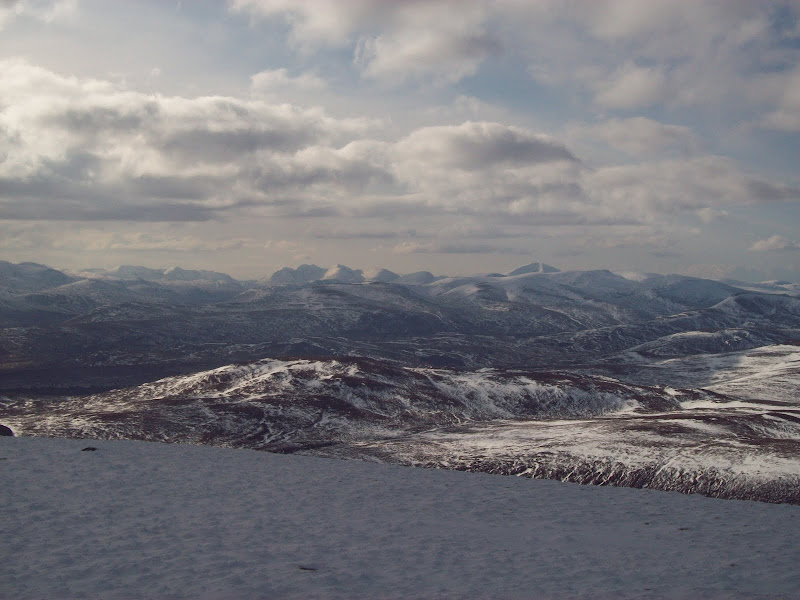 The air was cold, but surprisingly there was only the gentlest breeze, so I spent about 20 min on the summit, leaving at 5. I had estimated about 1.5 hours back to the bike, and this started off well with a speedy descent and re-ascent to Tom a Choinnich. I had expected the pony path down from here to be buried under snow, but it was actually usable, and accelerated my descent as far as Carn Gorm.

From Tom a Choinnich back to Ben Wyvis: 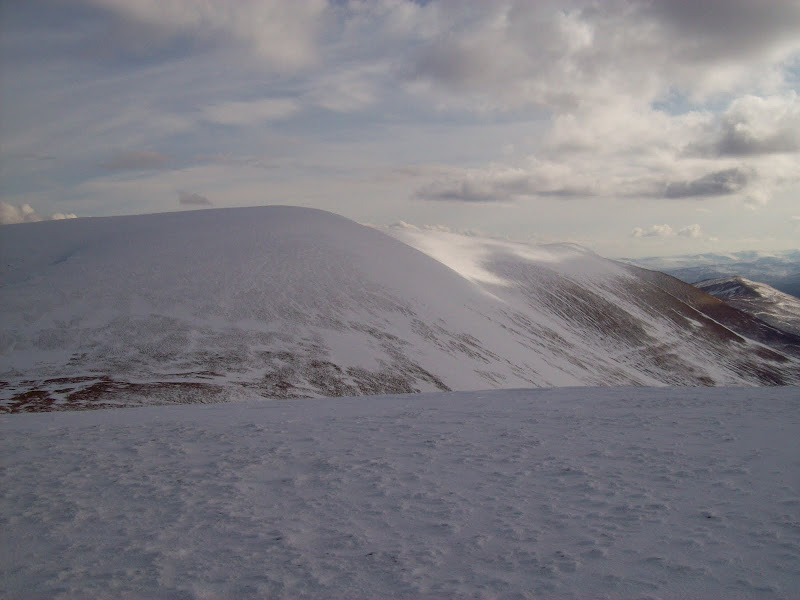 Across the rocky plateau of Carn Gorm to Ben Wyvis: 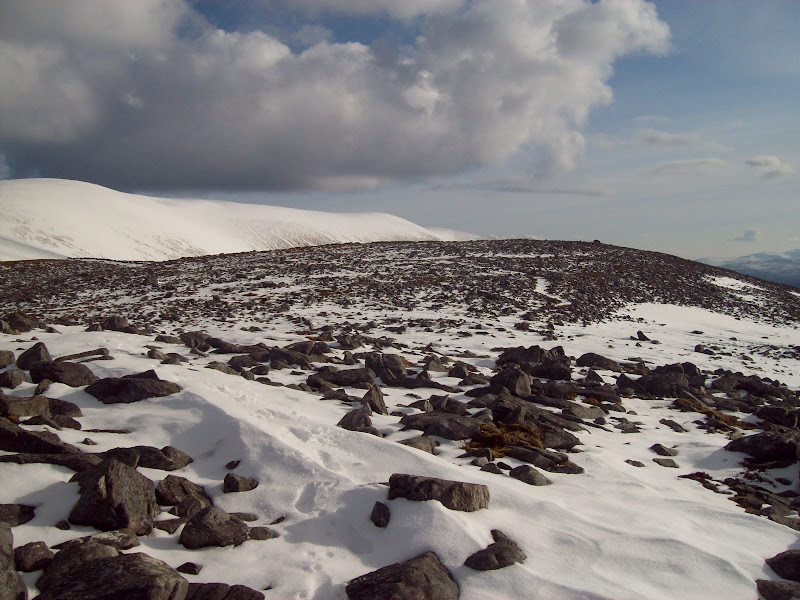 Here, I was slowed down by a rather uncharacteristic area of loose scree. In order to avoid all of the bog, the best route from here is probably to follow the pony path all the way back to Wyvis Lodge. However, as time was ticking on, I thought I would take a shortcut over Queen's Cairn. This route was quite fun in the higher parts, although slower, but my descent to Corravachie was rather tedious. In retrospect, I probably should have aimed for the stalkers path in Coire Lochan, but I hadn't bothered looking at the map, so ended up crashing down steep heather and crags. The last 500m to the grazing around Corravachie was heavily eroded by deer. Don't think I've ever seen such a large area eroded in this way - evidence of estate mis-management? 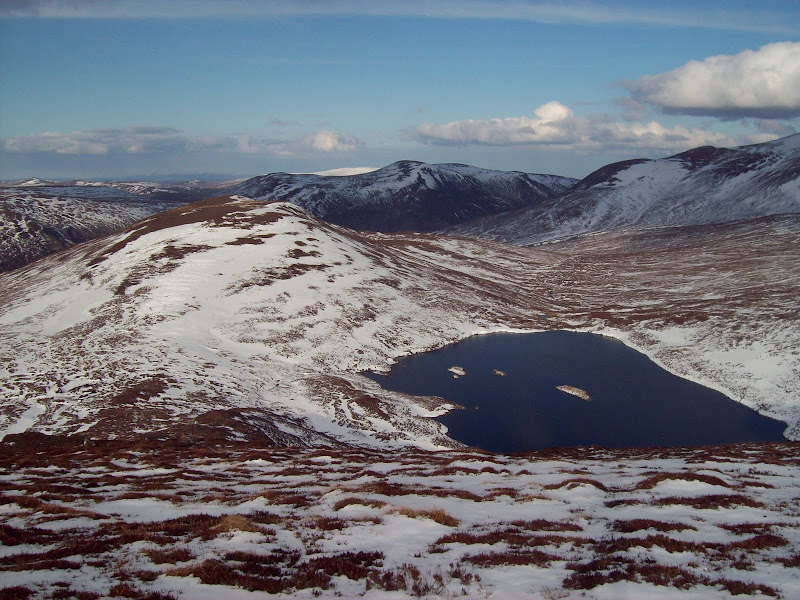 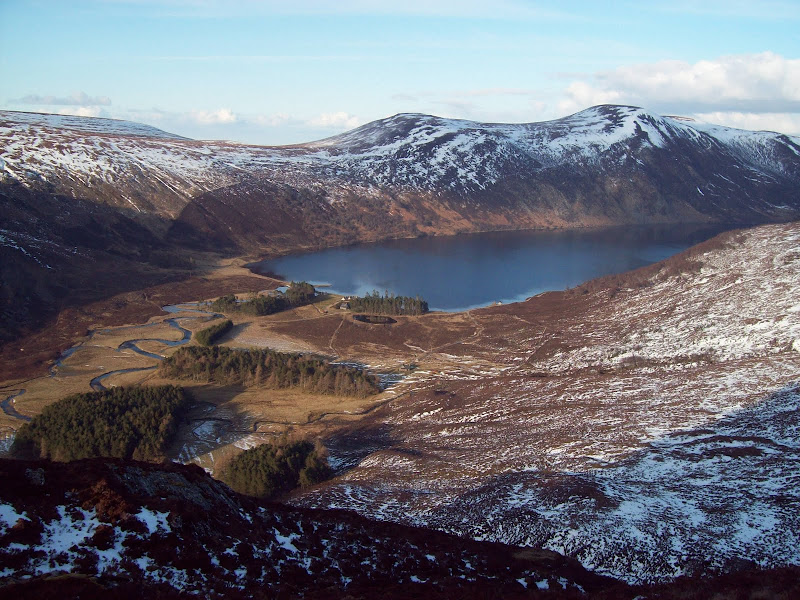 Overall, my descent took longer than expected, and by the time I had cycled back to the car it was nearly 7.30. I'd say this is a great route, easily my favourite on Wyvis to date. I was surprised not to meet anyone else on the hills, bar some estate workers in a Land Rover and a couple walking along the side of Loch Glass. Particuarly as with 134m of re-ascent, the top of Glas Leathad Beag is more prominent than about 10% of the Munros. 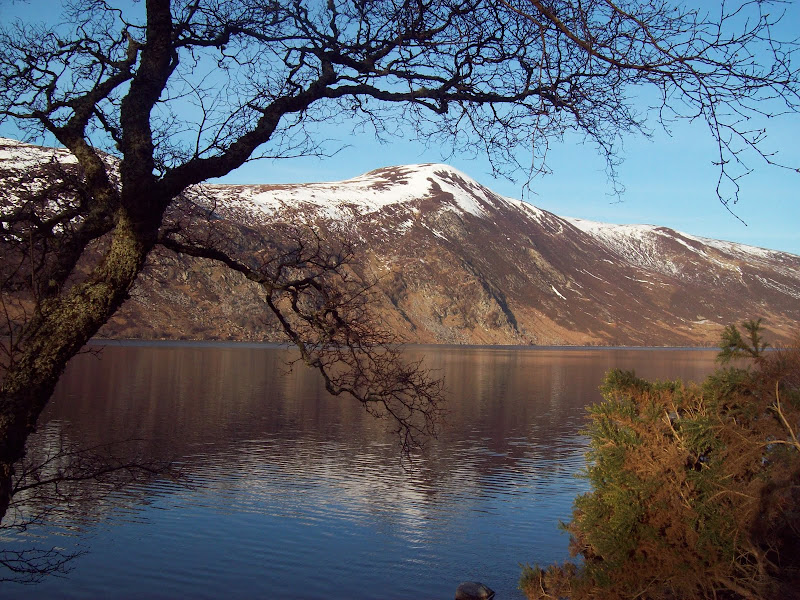 Nice report Malky. I've been up there twice - once by the standard tourist route, and once in a circuit via Tom a Choinnich - then back through the bog/forest. I plan to visit again and want to get round the hidden side/Glas Leathad Beag. Had been considering coming in from Loch Glass side so your reports very useful

Well I'll definitely be doing the whole circuit from An Cabar to Tom a' Choinnich (can't see the point of just doing An Cabar to the main summit and back really) - but you don't have to descend back through the forest from there, they've made a path across above the forest to rejoin the outward path to An Cabar - it looked quite good what I could see of it from Little Wyvis...

mountain coward wrote:Well I'll definitely be doing the whole circuit from An Cabar to Tom a' Choinnich (can't see the point of just doing An Cabar to the main summit and back really) - but you don't have to descend back through the forest from there, they've made a path across above the forest to rejoin the outward path to An Cabar - it looked quite good what I could see of it from Little Wyvis...

Hmm. When I did this route (fairly similar to the route HighlandSC took in this report: http://www.walkhighlands.co.uk/Forum/viewtopic.php?f=9&t=1565), rather than going back throught the forest, I followed the forest edge back to the main path. It was really boggy and tedious. Mind you, this was a year and a half ago, and they were in the middle of doing some major work on the path, so maybe tey constructed a new path then? Would be good if they did, as it would make a reasonable circular route then.

I saw a newly made path setting off that way - wasn't the one up An Cabar... they've certainly done up the path from the carpark through the forest to where you come exit the forest to start on An Cabar. I read in my fairly recent Munro book the path was muddy but it was really great!

Very nice report.I was looking at the map and thinking to attemp Ben Wyvis from Loch Glass, the weather doesn't look very bad tomorrow morning but for this time might attempt Ben Wyvis from the car park as not sure how the snow condition would be on the other side.

Sure, I'll do this one later on!