so we decided to have a go at these two from the south as described by the WH route.
As we were driving over from Stirling the clouds were well down over the mountains, something similar to Wednesday 23rd and it looked like we were in for another "fingers crossed lets hope it'll clear" sort of day.

We arrived at Inverlochlarig, parked up and after a small dicussion on the lines of is it worth it,we decided we'd set off and see how it panned out and if we were'nt happy we'd turn around and come back down. The walk up Beinn Tulaichean is a slog, very wet at the bottom and does'nt improve much higher up.

We walked into the clouds and the whole atmosphere changed to one of doubt.

Soon after we wandered into the cloud we came to the fence and the gate was not too far away luckily. There is a path forming a little higher up from the gate this gave us the prod to continue, although it's very wet the path is there, a bit sketchy but it is forming and the higher up the more it becomes a slippy black line on the hillside.

After what seemed like an eon we eventually arrived at the summit, just before the top the path starts to level off for about 200m which is very welcome. At the top and in the mist the summit photo was taken one of very few this day, unfortnately. 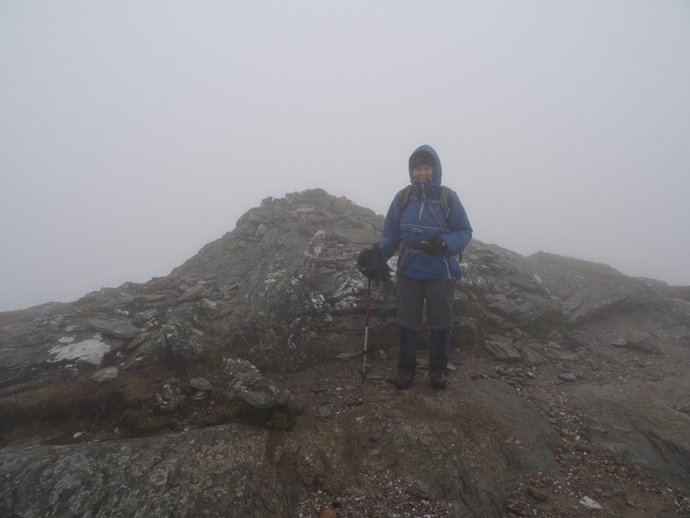 Then that question, "Do we carry on"? of course we do.

The WH route description says there's a good path between the summits and we'd worked hard to get where we were so lets go for it and sod the mist.

Although part of the reward are the views from the top I thought it would help the apprehension I have when walking in mist on unfamiliar territory. The path over to Cruach Ardrain is excellent, there was snow in places but this was no bother and after a bit of a trudge we were there, well I thought we were, a small cairn, mmmm? I said to Denise I thought it was a more substantial cairn at the summit of Cruach Ardrain so I checked the G.P.S and sure enough we were off our mark by about 50m, so a quick jaunt over to the true summit and we were there, The wind had got up so we decided to have our lunch on the way down so we made a hasty retreat off the top.
At the bealach between Cruach Ardrain and Beinn Tulaichean we found the small cairn marking the way off but decided that not knowing if there was a lot of snow in the corrie we decided to go back over Beinn Tulaichean and down the way we came, easy in theory but a killer on tired legs. it took ages to get down due to the wet and slippy mountainside,

coupled with the twisted knee I got in Glen Lyon the day before, but we got down eventually after a lot of effing and blinding (Denise was shocked). The cairn near the foot of the hill, is it a memorial? please excuse my ignorance. The rather limited view back up Beinn Tulaichean

This was another good day in the hills eventhough we saw "sod all", it did'nt rain and it was'nt cold. These two are good 'uns whatever the weather, for us, well, it's another walk added to the "we'll do it again when it's clear" list and maybe we'll get the weather in Glen Shiel at the end of May, here's hoping!!.

Well done, it was pretty lousy conditions on fri, I was along the road at glen lochy doing Meall Ghaordaidh lost gps signal on a couple of occasions and visibility was very poor at one point hard to get a bearing with map and compass, came off summit managed to lose path and before I knew it was 200m of course thankfully gps came back on, need to go back for the views sometime.

Thanks Rockhopper, It did cheer up on the way down, as usual, but we know that's the way it goes,

Hi falling monkey, it's interesting to hear of your loss of signal on the gps I had the same thing on mine but thought it was my gps going wrong, was it around 15.00 hrs for you?

Hi martin, had trouble all day with a weak signal dont know if its just glen lochy area in general as there is no mobile signal either from killin up the glen, could not even send a text from summit which is unusual, gps kept on coming up weak signal and would only come on if I went to mark a waypoint, its only a second hand etrex 10 so maybe the problem lies in that as newer ones are able to latch on to extra satellites.