Not Ben Nevis, not via the CMD arete

Not Ben Nevis, not via the CMD arete

Carn Mor Dearg.gpx Open full screen  NB: Walkhighlands is not responsible for the accuracy of gpx files in users posts
Plan for today Ben Nevis via the CMD arête, yay! The weather forecast wasn’t ideal for the trip, with an already stiff breeze which was predicted to gain in strength during the day. Just before leaving the hostel I filled in a route card, ticking the appropriate boxes for map, compass, emergency shelter etc. Expected time of return: 8.30pm, alternative route: turn back. It was so easily written down.

I had thought it would be busy, but I hadn’t expected the hill to be heaving this much on a pre-season week day. Lots of groups doing various challenges and efforts for charity. I found it quite sociable to be honest. Chatting to people, listening to their stories. Most pleasant. No pictures of the first section as too busy mingling

. So whilst all this socialising made the climb up the excellent steps/path go quickly, it did occur to me that those steps probably wouldn’t be so comfortable on the way down.

Leaving the masses behind at the halfway lochan and continuing along the good path to the CIC hut. A stark contrast with the other side of the mountain; not a soul around. 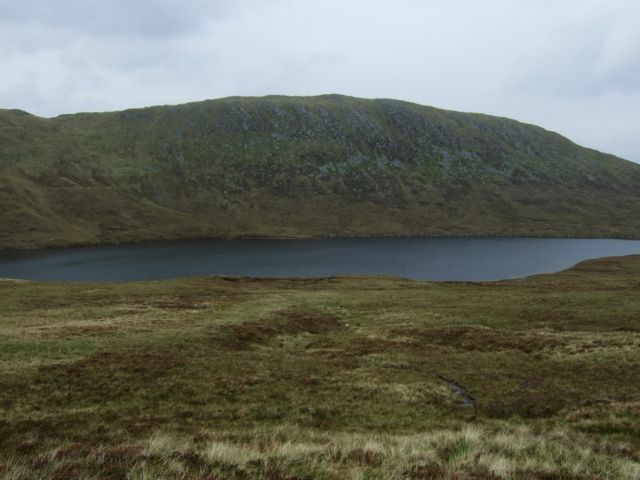 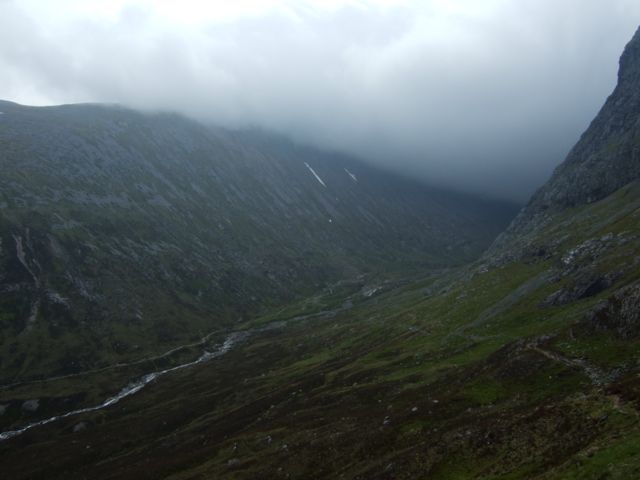 Path towards the CIC hut 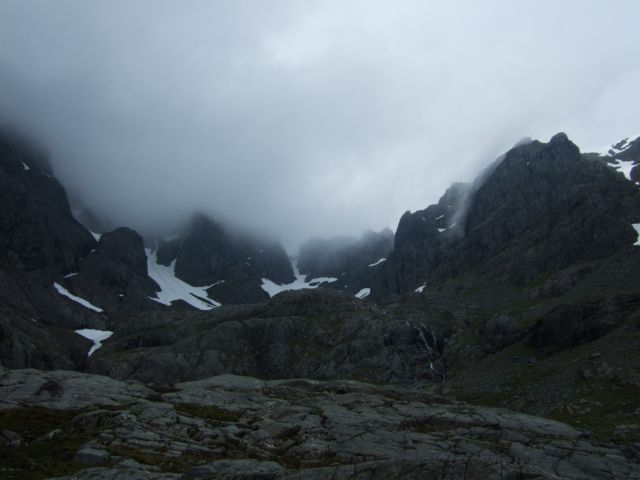 It was drizzly and the wind was howling. Just in case I hadn’t noticed this, the little weather station at the hut would have made it obvious. I reckoned it would be OK to continue to Carn Mor Dearg, as the ridge would be broad enough to not get blown off. Once on the ridge I would re-assess the suitability of the conditions for the CMD arête. So with a compass bearing aimed in between Carn Dearg Meadhonach and Carn Mor Dearg I was off. Just one word to summarise the ascent: steep. I also quickly learned to stay away from the long stretches of red rock, which looked like paths. They were very loose.

There were a lot of voices shouting on the NE ridges of Ben Nevis. They weren’t calling for help, but it was distressing nevertheless. I stopped several times to peer into the distance, trying to spot climbers in difficulty, but didn’t see any. On the ridge, looking south

As expected it was rather blustery on the ridge. But who knew, maybe the wind would ease off suddenly? After all, the Scottish weather is very changeable. Or was I asking too much?

For a short while it looked as if the sun was coming through. Alas, that didn’t happen either. The cloud made the east ridge of Carn Dearg Meadhonach look very interesting though. It was an easy walk to the summit, where it was damp, grey, cold and still very windy. Decision time…. 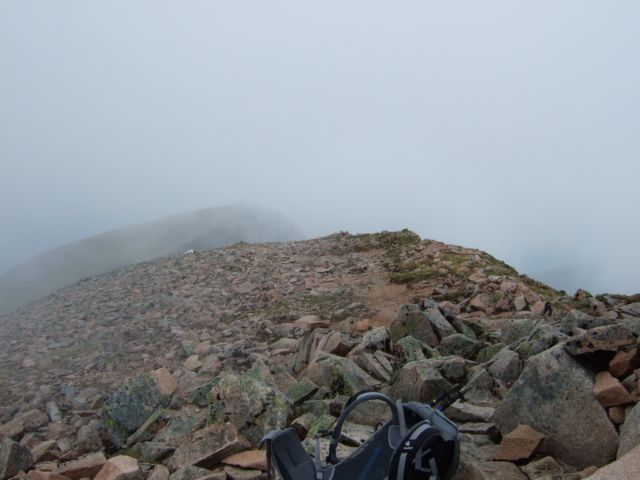 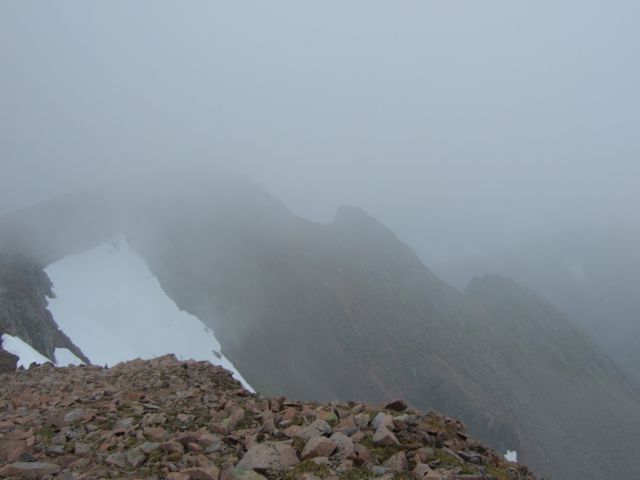 I had been looking forward to the arête for a long time and was very tempted to carry on. Also, the ascent onto the ridge had been unpleasant enough to not want to do that again. But, in this wind continuing would be a bad move. So, keeping my word to the route card in the hostel, I turned back, albeit with a heavy heart.

The descent was even more unpleasant than the ascent and by the time I was back on the path I was disappointed and in a foul mood. Perfect breeding ground for a cunning plan: once back on the tourist path I would continue up Ben Nevis. 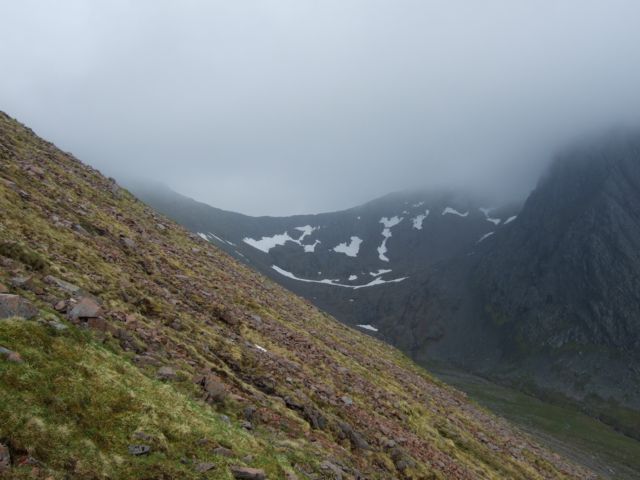 It was 3.30pm when I got back to the half way lochan. So enough time to ‘nip up’ and be back before my self-imposed curfew. But first, I needed some food. Upon opening my packed lunch it turned out that since breakfast I had been living on just one sandwich! That explained the grumpiness! The less than lovely climb up and down from Carn Mor Dearg and the general urge to keep moving because of the weather had made me postpone lunch and eventually forget about it.

With a bit more sustenance than before I continued along the tourist path, expecting that by now the busyness would have died down, but there were still plenty of people walking up. This made me feel a bit less of a lunatic. Although considering the abundance of mist and fierce wind, we all must have been mad, to be honest.

It’s funny how time flies when out on the hills. Before I knew I had been walking for an hour and, curfew in mind, was now wondering how much longer until the summit. A nice couple on their way down, said it had taken them 45 minutes from the summit to here. Doing the maths, I knew I was cutting it short. Best get on with it. Checked progress on the map after another 15 minutes of walking. It was less than I had hoped. Hmm. Continued for a bit. The wind was very nasty on this stretch. My legs were like jelly and I wasn’t feeling particularly energetic anymore. It was then that the pointlessness of the whole enterprise hit me. Best case scenario: racing against the clock, no views, not being back in time. Worst case scenario: well…. What for?

For the second time today I turned back, annoyed with myself for not eating enough and feeling pretty deflated about the trip. And then there was the steppy path down, punishing my already tired body even more. Not my best day on the hills. 

Back at the hostel, after a shower and a good meal, things looked much brighter. It had been a valiant attempt and I still had the CMD arête to look forward to for next year. Think I will attempt it from a different direction though!

Nice report, sorry you never made the Ben, but at least you get to go back!! Plus what enjoyment would you have gotten in that clag anyway

Ah what a bummer, I know the feeling well though when everything is against you...

As a point I wouldnt have worried too much about the climbers, they are communicating, hearing the shouting echoing around is fairly standard... more worrying;y, I once hear rockfall on the NE Buttress three times in the space of time it took me to cross the CMD Arete

Beaner001 wrote:Nice report, sorry you never made the Ben, but at least you get to go back!! Plus what enjoyment would you have gotten in that clag anyway

Thanks Beaner001, exactly my point! Only a few more weeks and I will be back!

Kevin29035 wrote:Ah what a bummer, I know the feeling well though when everything is against you...

As a point I wouldnt have worried too much about the climbers, they are communicating, hearing the shouting echoing around is fairly standard... more worrying;y, I once hear rockfall on the NE Buttress three times in the space of time it took me to cross the CMD Arete

Thanks Kevin! When I got to the CMD summit I heard triumphant whooping, so I knew they were OK. I joined a climbing club last autumn. Only done indoor climbing so far and now unfortunately off with an arm injury, but one day (still a long way away) I hope to get up to Ben Nevis from the north side.

A good safe day out there SH in testing conditions, and the CMD arête will still be there for you next time...

Thanks Kenny! Only 31 more sleeps!