Started from the north by Loch Tummel, marked on the map as Netherton, there is no house there now just an abandoned lorry trailer and today anyway a host of golden daffodils. Looking back to the start down the wrong track

Do not start up the grassy track straight ahead from the car park area, it ends up too far east. The correct track is in the trees on the right as you look uphill. It crosses the burn immediately and will save you the heather bashing I had to get back to the proper track.
Follow the track for about 7 kilometres over the shoulder of Beinn Eagagach and then find a way across a rather boggy stretch to the ridge and the summit of Farragon. Took me two hours to the high point on the track and another hour to the summit, though I did spend time birdwatching (red and black grouse, ravens, a golden eagle, snipe and a whinchat among others). Also I had managed to leave my lunch at home on the kitchen table so had only 1 banana, a flask of coffee and plenty water to keep me going. No harm in that as I found out.
Good views from the summit, west to Schiehallion, the lawers group etc and north could just see the Cairngorms, Sgorr Gaoithe sticks up, and Beinn a' Ghlo was prominent. 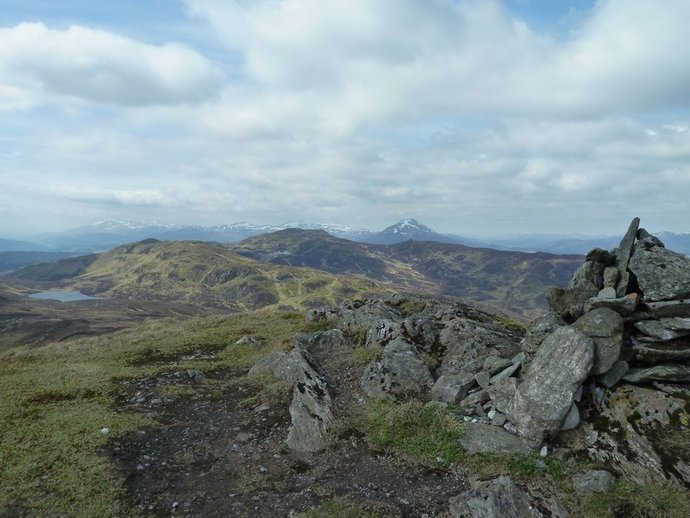 Went back almost the same way, just added the top of Beinn Eagagach as it was so near the high point of the track, seemed a shame to leave it out. Followed the track down to find out where it started in the trees just behind the car! That's me, a wiser man, and after the enforced diet a hungrier one too.