After completing the Glen Ey 5 last week and looking over to Beinn a'Ghlo, i decided on doing another circuit. Starting with Beinn a'Ghlo. Perfect conditions as the sun was periodic and it wasn't too cold.

Headed up to Monzie Farm from BlairAtholl where i parked the car then headed for the 1st of the day, Carn Liath.
Carn Liath being the mountain you can see travelling North on the A9 with the scarred SW shoulder. Making up towards Carn Liath

The path is well established and easy to follow up to the summit. 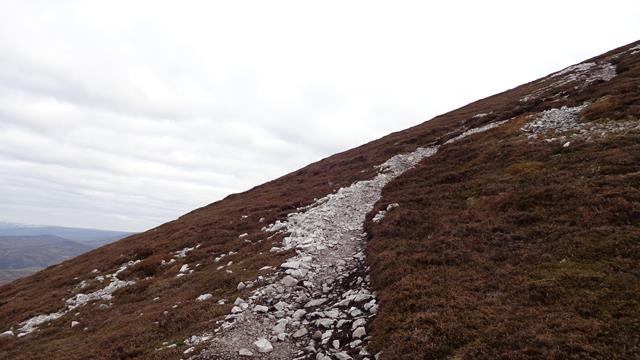 On a Rocky Road ; 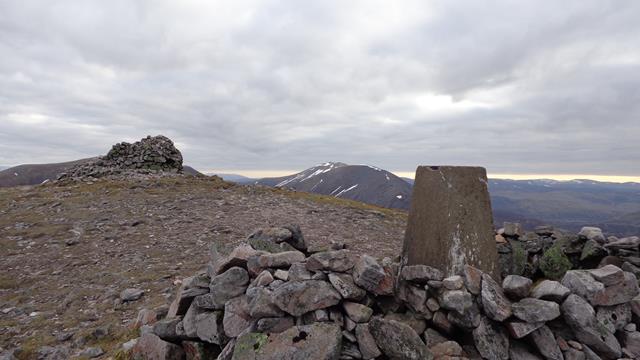 Heading NW, the path is easy to navigate for the next summit of Braigh Coire Chruinn-bhalgain. 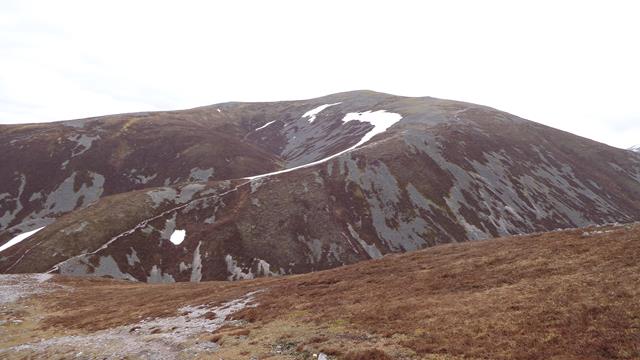 Continuing down the crest, there isn't munch of a path but heading NE, i dropped down a bit then headed E where you'll pickup a path heading along to a col. Kept going where i eventually come to the boulder summit of Carn nan Gabhar. Heading NE, then N after 100m or so, i headed for Glen Tilt. Kept heading for the bridge over the river Tilt as it's the only way across, even though i hate losing height between summits. 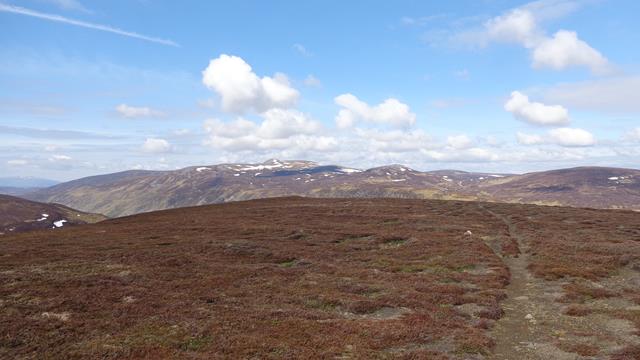 i headed down a really steep heather clad descent which is hard going on the knees by now. the bridge can be seen on the way down River Tilt and the bridge

After crossing the bridge, the only way is straight up the heather, keep to the right of the crags. this is a long hard slog. Once i got over the top, i headed SW. it's another slog over peat bogs and heather. eventually, i could see the start of the stalker's path which takes you up to the summit of no.4, Carn a'Chlamain. up past the crags, heading SW for the stalker's path with Carn a'Chlamain in the distance. on the stalker's path on the summit of Carn a'Chlamain

After a wee natter at the top with a woman at the summit, i headed NW along a path which dropped down into Gleann Mhairc. Continued up over wet ground to the bealach between Carn a'Chiaraidh and Beinn Mheadhonadh (corbett) and headed N, towards Beinn Dearg (the 5th and final Munro of the day). Heading for the bealach between Carn a'Chiaraidh and Beinn Mheadhonadh (corbett)

I had to head round the Western side of Carn a'Chiaraidh to begin the ascent of Beinn Dearg (see pic below). Another real slog over wet peat and heather. Legs were like lead by now ))) 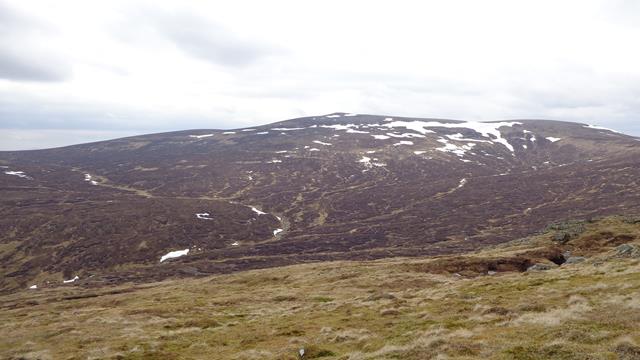 heading round the Western side of Carn a'Chiaraidh (on the right of this pic.) to begin the ascent of Beinn Dearg. From the trig point, I then headed SW down the path through boulders to some flat ground. Then i headed SE and over the northern arm of Beinn a'Chait and continue to this hill's summit, headed S after the summit where i picked up a well established path to take me on my return route down to the forest above Glen Tilt. Eventually you'll return to car-park near Old Bridge of Tilt wher you have to find you're way back to the car at Mozie Farm (4 miles away!!!).

A healthy days bagging but well rewarded with some fine views and several beers when i got home.

That's a huge day well done you must be fit!

It's what I like to call three (individual) days walking

Good effort, and some nice photos too

That's some going there, I did Carn a'Chlamain yesterday and thought it was quite a tough round on the feet. I did think about heading over and doing Beinn Dearg but with clouds building in the west I decided just to head back the way I came

I've already done Beinn a'Ghlo, but you've inspired me to combine Beinn Dearg and Carn a'Chlamain into a single outing. I'll be adding that to my to-do list. Thanks for the insipritation

thank you for the kind replies. it was the longest day out to date but mind over matter )

We wondered where you went to.
Me and My dad were right Behind you.
We thought we would of met you at the Summit of Carn nan Gabhar.

Interesting route & certainly a marathon day with some great photo's

The walk out off Beinn a' Ghlo sticks in my memory, seems to be never ending

Fife Flyer wrote:Had to get my map out to see exactly where you had been

Interesting route & certainly a marathon day with some great photo's

The walk out off Beinn a' Ghlo sticks in my memory, seems to be never ending

Haha ... that walk out I will remember always ... my mind went into shutdown and autopilot took over, i came off Carn nan Gabar, taking the normal line down Alt Bealach an Fhiodha and then managed to follow deer/sheep trails around Airgiod Bheinn. It only dawned on me when I noticed the odd boot print was replaced with hoof prints ... and my going getting higher rather than lower ... I eventually stopped and took note, checked the map and altered course to get back on track. Which involved a sightly boggy cross country route. Although it was unplanned and off route, once back at the car it felt like fun

). Glad to see you managed your whole circuit

@mountainboy12, I noticed the both of you on my tail, lol. you had a wee collie with you?

@theformeraatronomer, it took a few hours to complete the circuit after seeing you. definitely my toughest circuit to date.

@Silverhill. i was planning on giving up on Beinn Dearg but when i weighed up my options, it was as far back as it was to continue. I can say without a doubt that my legs are paying for it today

Echo everyone else's comments - some effort.

I've done all these hills but took me 3 trips and would never have considered doing this in a day.

Wow, big round this one, I thought Beinn a'Ghlo by itself was big enough (but I did it in winter conditions so maybe found it tougher). Really well done.

I think Tilt was the magnet for Walkhighlanders on Saturday! We were there as well - climbed Ben Vuirich, the shy Corbett next to Beinn a'Ghlo. We also met a fellow WH member near the summit