Ben Lui and The Don.

Ben Lui and The Don.


Forecast was looking good, so temptation to get the hills too strong to resist, although was a pity my walking buddy, Charles couldn't make it. Arriving early at the car park, there were a few others already there getting the gear on, so I was a bit apprehensive about how foolish I would look getting the welly boots on and my improvised waders - bin liners, to keep the feet dry, if the river proved to be too high!
Just as I was about to set off, one of the other walkers approached, ready to set off and asking about how I intended to cross? He seemed to approve of my plans, but I wasn't at all sure of his flip-flops, specially with a hard frost turning the grass white. Ah well, he might have the last laugh, if the water gets into my wellies. We set off together, looking for a suitable crossing point, which the path soon led us to the point where the railway line, crosses over the wee bridge. 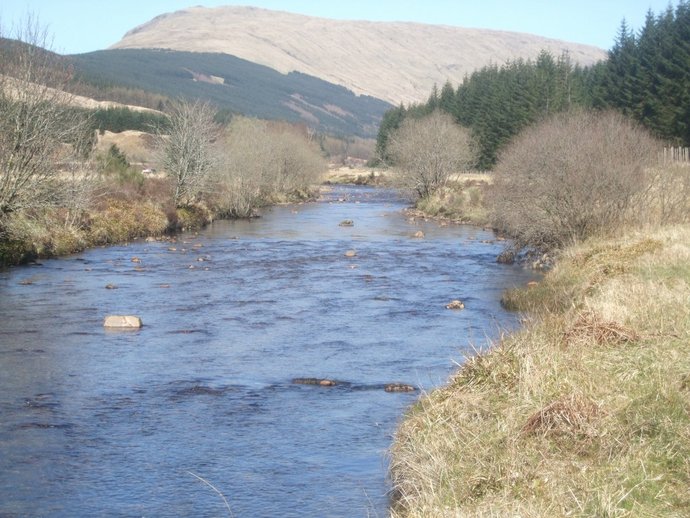 Having some protection, I bravely made for the far bank and was relieved to find the water level stay a few inches below the top of wellies. Phew! Now what about this fellow? No change of footwear, straight into the water and across he went. Crazy! I know my nervous system could not cope with such trauma and judging by his face, neither could his! Would, could you? Nah, me neither.

Anyway, time to get the hiking boots on, plank the wellies and make for the hill. We soon got chatting and tentatively agreed to head off together, as I'm reluctant to slow someone down and show off my lack of experience. My companion, Derek had arrived early after a long trip from Arbroath, but I think crossing the river had well and truly woke him up now. Turned out he was a teacher from Aberdeen, naturally enough, a true Don!
I think we can vouch that the path through the trees is as muddy as described, requiring several uncomfortable detours round the fringes, to avoid getting stuck. Probably should have kept my wellies on for this stage? We found the small 'cairn' marking the crossing point of the burn, with the blue support rope, but it is indeed, more a pile of a few stones, than a landmark. This path crosses a forest road, at a 'newish' bridge and continues to splash it's way up to the forest edge, till one exits via a gate onto the open hill of Fionn Choire.
We had both planned to follow the WH route, head east and make our way on to the north ridge, to the top. Bit of a slog up this stretch, but it gave us the chance to have a bleather about life, work, hills and the beautiful game. Thankfully, Derek did not rub in too much, his own team's successful season and my team's ongoing blues, if you'll pardon the pun. Yours truly, towards Beinn a'Chleibh.

As we made our way up the ridge, the views began to open out and blue sky built up anticipation of what would lie ahead.
I had made recent enquiries as to snow conditions and had been assured there was little to worry about, hence had chosen to leave my crampons in the car, when little, if any snow, could be seen from the bottom. I think we had just been talking about how conditions can change, when we crested the brow of lower ridge and saw our first snow and plenty of it. Mmmh, maybe should have brought the crampons after all?! A couple of steps showed it to be quite icy, but with a bit of give and someone had been up this way recently leaving quite nice steps to follow. Heading up the ridge.

I tentatively made my way up, using the axe for extra grip, while Derek, the Don, got his crampons on and soon zoomed up the snow field behind me. The views east and down into Coire an Lochan and Coire Gaothach were truly awesome, especially seeing a climber make his way up the ridge of Stob Garbh. Maybe one day, .........?
There were plenty more areas of snow and tricky wee patches of rock and ice to scramble over, near the cornices, before we made it to the NW summit, then over to the top for some more photo's. We were two and three quarter hours to the summit. Amazing views in all directions and not a breath of wind. Over Central Gully to Stob an Tighe Aird.

From here the descent down to the bealach was pretty straight forward, other than some rocks and snow to traverse. Time for some grub and climber watching.
The hike up Beinn a'Cheibh was likewise quite routine, though some avalanche debris at the foot of Coire Annaich looked quite spectacular, but neither Derek or myself, was minded to have a closer look. Four and a quarter hours to the top. Time for a few more pics here, though the haze was a bit frustrating, then back down to the bealach, watching several groups follow their choosen path up the north ridge. Derek spotted one of them have a fall/slip/slide in the snow. Hopefully, was deliberate and didn't seem to be a cause for concern. Looking south to the Arrochar Alps. Avalanche debris, Coire Annaich. Some of these blocks we estimated to be the size of a small car! Seeking a way off the bealach.

We had thought that the drop down from the bealach would be relatively trouble free, but in actual fact, was also quite tricky due to the icy snow and being unable to find a snowless route down. Still, the footsteps that were there just required a bit of patience to follow and we were soon on solid ground, making our way back to the gate at the forest edge. Same nimble footwork round the many bogs and back to the wellies, which were thankfully still in situ. Just had the pleasure of watching Derek's contorted face as he braved the river one more time, then back to the car for a cheerio, in just over the six hours.

Would, could you? Nah, me neither.

Another unforgettable day in the hills. Thanks for the company, Derek and am sure you will have your students in Kuwait, eating out your hands. Then again, maybe a different figure of speech might be more appropriate? Someone making their way up from Stob Garbh, I think. NW top and beyond, to Glen Etive and Glencoe Hills.