Thursday 24th April 2014 - Rhiconich to Blairmore. Dep Rhiconich 1020, arrive at the Sandwood Bay Car Park at Blairmore at 1245. Distance 8 miles, time taken 2 hours 25 minutes. OS Landranger map 9.
Drove up from Ullapool and parked up in the Rhiconich hotel car park from where I followed the road to Kinlochbervie and onto Blairmore. After the rigours of the two previous days, this was a simple stroll.
Even though I was walking along the tarmac, in what compared to the previous two days was a relatively built up area, I found this walk quite relaxing. No hurry today, just reach Blairmore and enjoy the views over Loch Inchard en route. How can you not like a walk that passes through somewhere called, 'Badcall Inchard?' What a cool name for a village! Popped into the London Stores at 1105 - is this the furthest shop from London on mainland Britain? - and was impressed at how much stuff he had squeezed into such a small space. Some nice views from The London Stores looking back to Arkle and Foinavon. View to Arkle (right) and Foinavon (left) from the London Stores

By 1130 I'd arrived at the Kinlochbervie War Memorial. There's a fascinating memorial to local man, Robert McBeath, beside the war memorial. McBeath won the VC in the First World War, returned home to Kinlochbervie, married his sweetheart, then emigrated to Canada, joining the Canadian police in Vancouver before being murdered while on duty in 1922. His memorial is well worth a read.
Just beyond Kinlochbervie Harbour the road splits. Follow the road signposted to Oldshoremore that runs up the hill to the right. 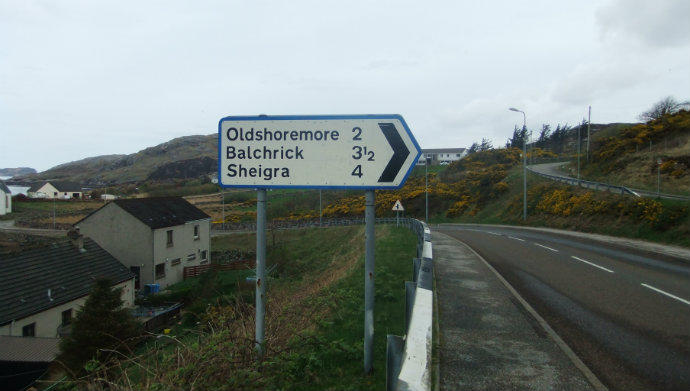 As you perambulate along this road, you'll soon pass the Kinlochbervie Hotel and on your right Loch Innis na Ba Buidhe will come into view. Beyond the hotel the the bright lights of Kinlochbervie are quickly left behind and the landscape, once again, becomes increasingly rural. I reached Oldshoremore at 1210 from where I enjoyed the pleasant view down to its beach and out over the Atlantic. View of the beach at Oldshoremore

Passing through Oldshoremore I also enjoyed fine views back to Arkle and Foinavon. Staying on the main road, I passed through Oldshoremore and reached the car park at Blairmore at 1245. This is the car park used by those who park up before walking across to Sandwood Bay. Exchanged pleasantries with a couple in the car park. They were returning home to Forfar after 4 days camping at Sandwood Bay and kindly offered to give me a lift back to Rhiconich and my car. If you're reading this folks, then thanks again, your offer was greatly appreciated.
So, that's Kirk Yetholm to Rhiconich completed; just one more stage, Blairmore to Cape Wrath to go. The end is in sight. Just need a weather window, boss to grant my leave request and to know the military are not using Cape Wrath for military purposes and I'll be heading North ready to complete my version of the Scottish National Trail. Bring it on