The one where we bagged sunburn ...and two Munros

The one where we bagged sunburn ...and two Munros


22 degrees C on the car on the way home. Really didn't think that Braemar did 20s (except minus 20s). Definitely our warmest day in the Cairngorms and possibly the warmest we've ever been on a mountain but no complaints at all. 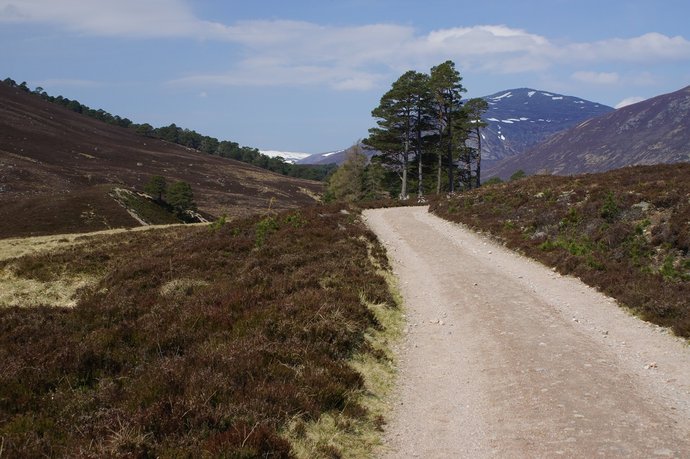 Glen Lui in all its sunny glory

(quicker than last week too although saying that, we couldn't really have gotten any slower). 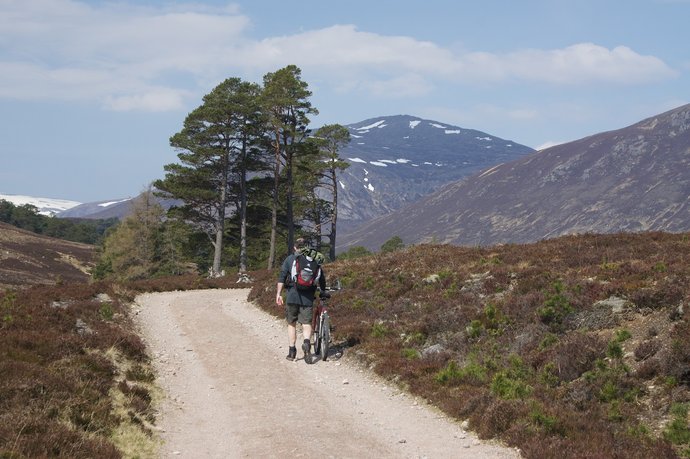 This biking lark is not as easy as it looks...having a sneaky walk after checking that there were no other "proper cyclists" around

After reading other WH User reports we decided to leave the bikes a short distance from Derry Lodge on the path to the east of Derry Burn. 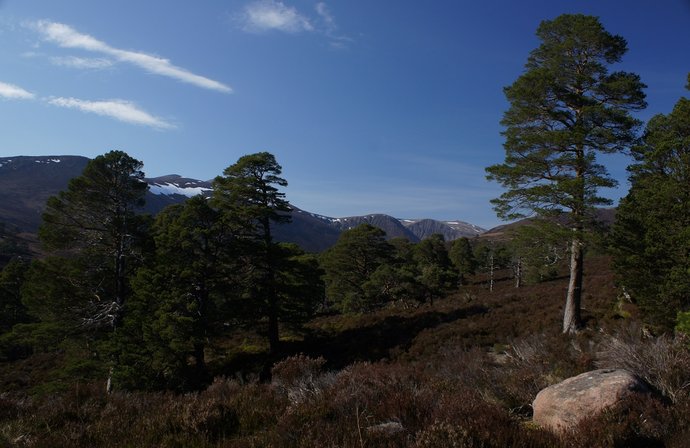 Initially missed the path of to the right because we weren't concentrating. A teensy bit of retracing and we were back en route again. We found that this path was pretty boggy 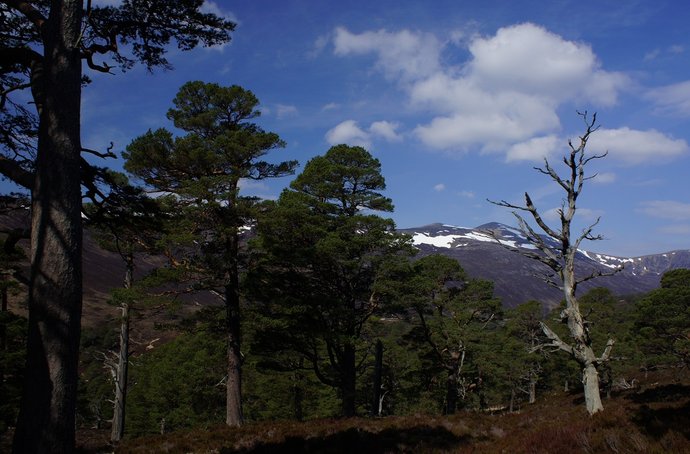 and it remained so until we were well over halfway up Meall Lunndain where it quickly became tinderbox dry and that made for much easier walking. 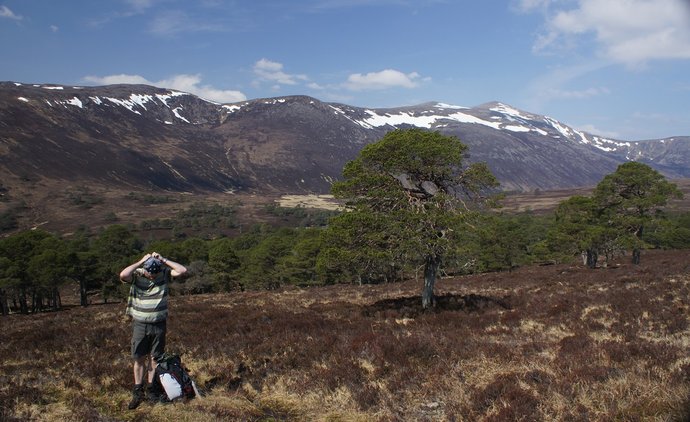 ...and the bandana is out, and it's making its way towards his head. Yup, it's a heatwave! 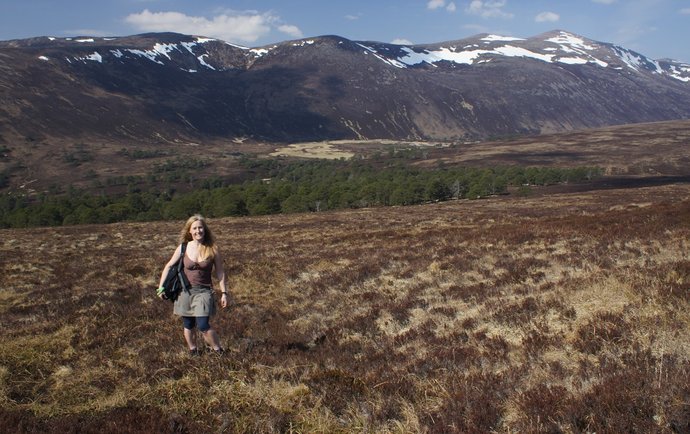 No bandana for me but it's down to a strappy top. Just LOVE the myth that Scotland is cold, wet and full of midges haha!

Continuing our ascent towards Beinn Bhreac we found ourselves striking out for the smaller western summit rather than the correct and easterly summit of 931m and as a result we ended up taking the summit in a wide arc to correct our mistake. Posed for the necessary "summit piccies" Beinn Bhreac with Derry Cairngorm behind and the High Cairngorms beyond I'm the king of the woooooorrrrrlrrrrd!!! Ok we all know that LEO is the King of the world but I can pretend.

and given that it was rather breezy we descended to a more sheltered spot on the NE side for lunch.

After refueling we were ready for the expansive Moine Bhealaidh. 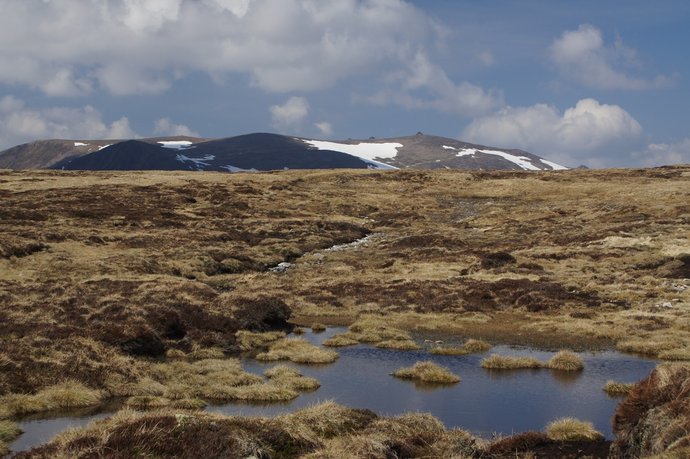 The distinctive barns of Beinn Mheadhoin as viewed from Moine Bhealaidh

It was a long trek (as stated in the WH route) and thanks to the WH route plus User reports we were able to avoid the peat hags and potential bogfest. 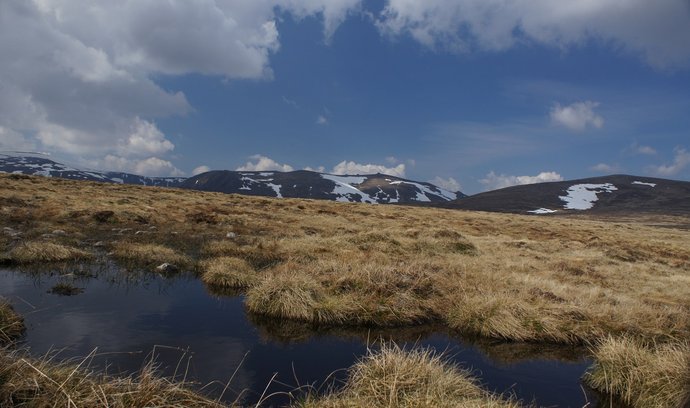 Can imagine that this part of the walk must feel endless in inclement weather and grim too given that it was very exposed but in fine ether it was a nice break in between ascents. 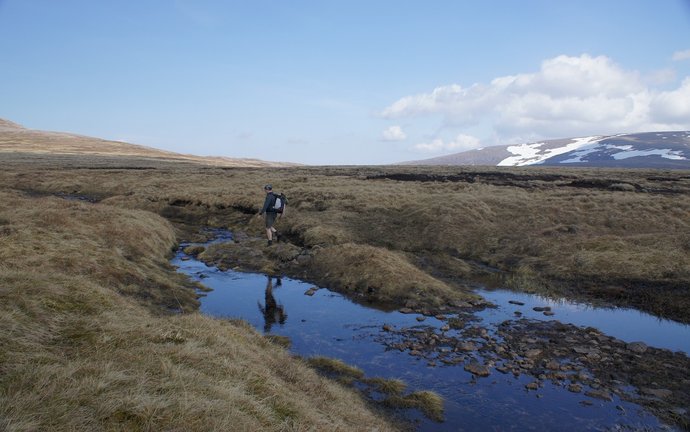 The bogs really weren't that bad at all. We found the path up to Beinn Bhreac much boggier

Reaching Beinn a Chaorainn we plumped for the greyish looking stony SE shoulder and disturbed a couple of ptarmigan with our puffy and blowy ascent. The summit cairn was a welcome sight 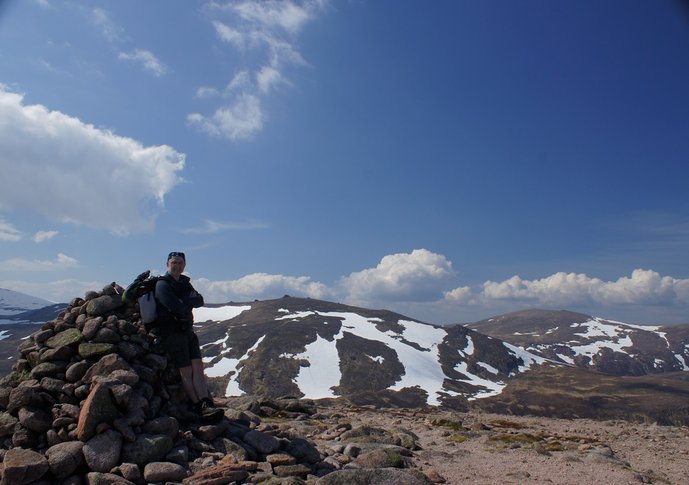 The Hubs stands (looking mightily pleased with himself) at the summit cairn on Beinn a'Chaorainn against a backdrop of a glorious blue sky. 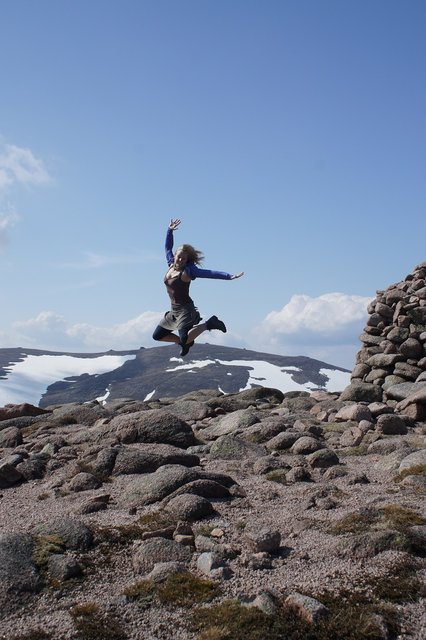 Found the energy for my "summit pose"

and the views were every bit as grand as promised. 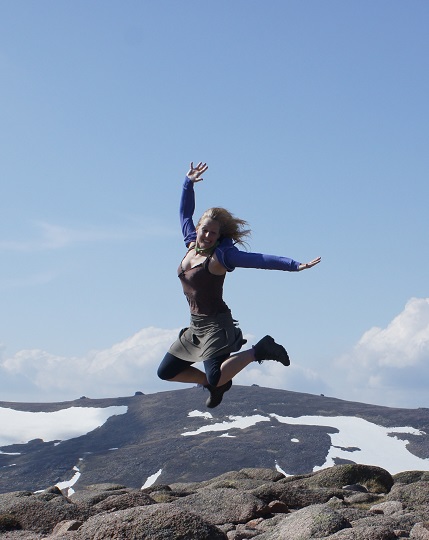 The best feeling in the world!!!

Went a little bit overboard at this point with the photos but we really wanted to make the most of such fantastic views. 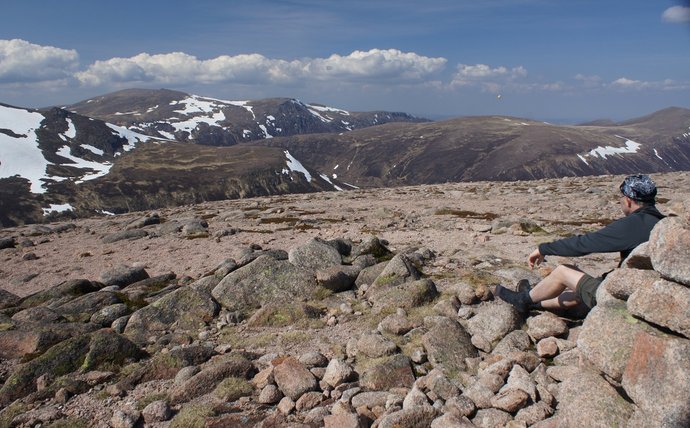 Hubs takes in the spectacular views

After an apple and drink break we picked our way SW through the boulder field to where the mountain seemed to end abruptly with a near vertical drop to the valley floor. 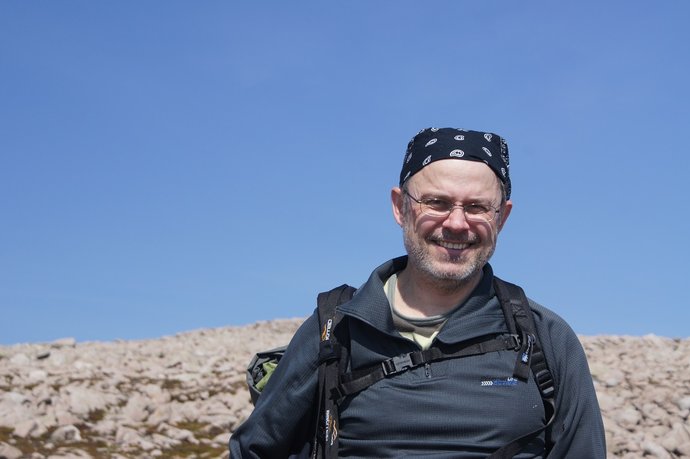 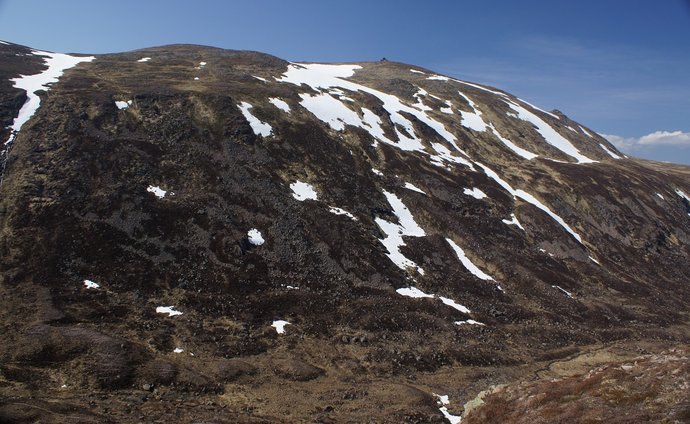 At this point the descent was pretty much vertical and we scooched down the steep side in a decidedly uncool and ungainly fashion through screeish rocks and grass that offered very little anchorage. 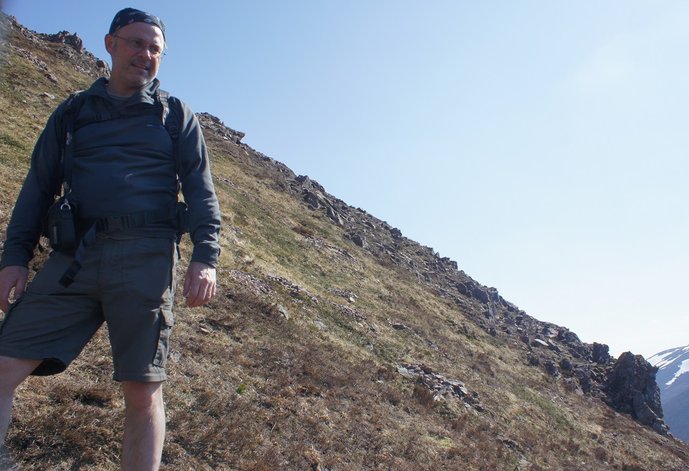 T'was steep. No piccies of the bum-shuffling

We carefully continued in this manner until the Lairig an Laoigh path was reached. To be honest the descent felt like more of an achievement than the two Munros!

Picked up the path and took the opportunity to empty the 1lb or o of heather and stones from our boots. 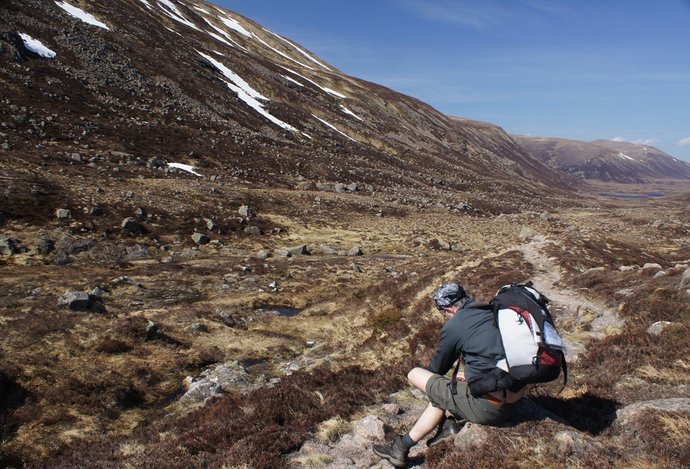 Amazing what you can collect in your boots on a dodgy steep descent.

The heat on the valley floor was incredible; just like high summer 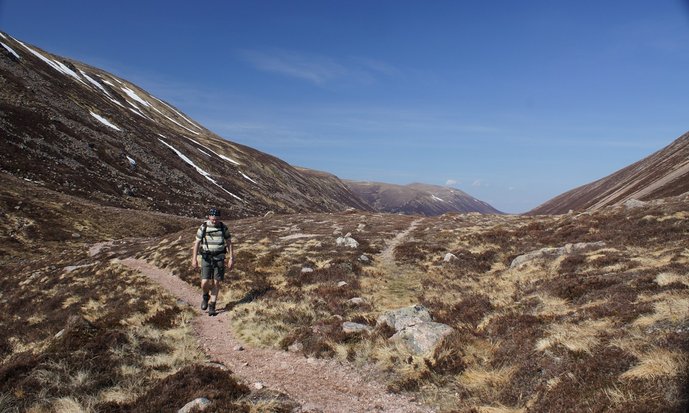 Getting a fine Highland tan. Lairig an Laoigh

and it made for a very pleasant walk back down Lairig an Laoigh towards beautiful Glen Derry.

Glas Allt Mor didn't pose any problems and crossing was quite straightforward at the point where the path met the burn. 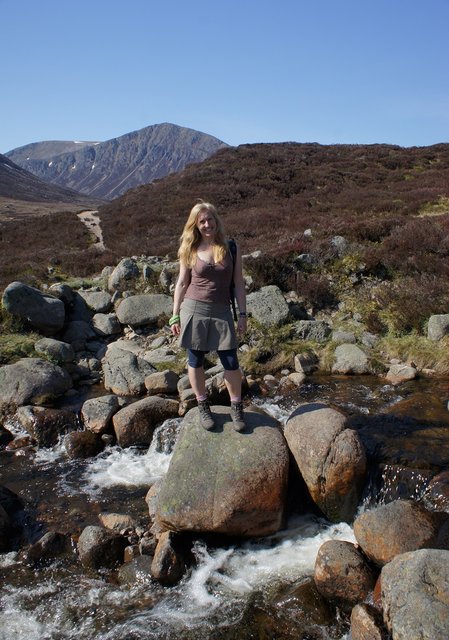 Glas Allt Mor was nice and straightforward to cross. Given the weather a wade across would have been a welcome treat for the feet! 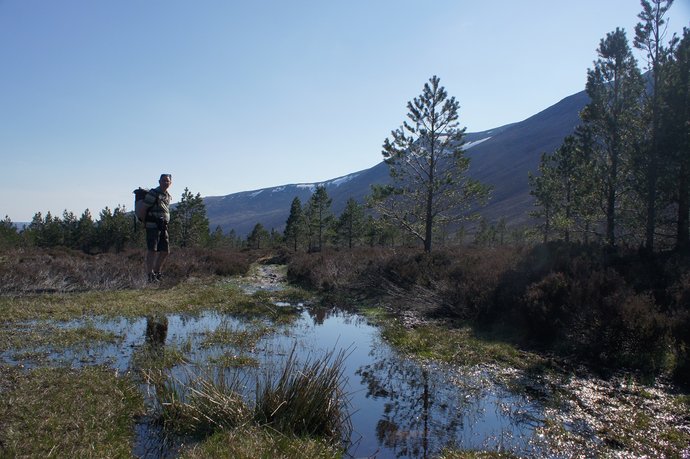 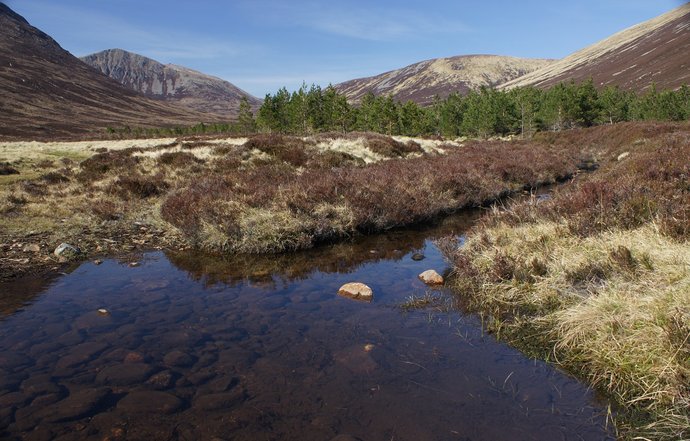 Glen Derry on a belter of a day

In no time we were back at the point were we'd left the bikes. We didn't follow the instructions to cross the little metal bridge over Derry Burn but stayed on the ascending (sigh) path so that we could collect the bikes without having to backtrack.

From then on it was a wheely nice bike (apologies) all the way back to the carpark. 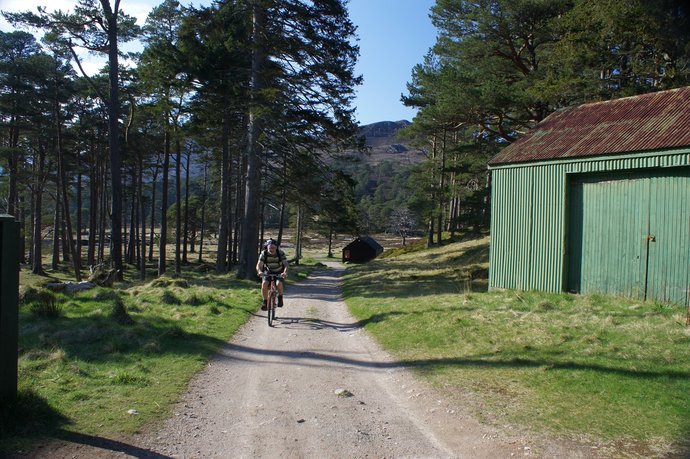 Very glad of the bikes at this point.

Re: The one where we bagged sunburn ...and two Munros

Another fine report and fun as always. Grt pics. Thanks