Low misty cloud with the promise of sun later on and so we opted for these two boggy Munros...and boggy they were. Given that it'd been really warm and dry of late it was still a squelchy walk on the lower slopes of both Munros. A bit like walking on a great big bath sponge.

Passing through Fersit we were soon on the open moorland with no paths at all to speak of. Just some cows and calves near the "hut and pens" and we gave these a wide berth given that we had our doggy boy with us. No rain but low cloud. Hopefully it'll clear by the time we get to the summit?

Followed the WH instructions to the letter and found ourselves inching up the near vertical side of Sron na Garbh-bheinne at the pitiful pace of 1.5mph. A proper climb this, none of that walking malarky, every available limb was put to use.

A plus to our painfully slow ascent was that by the time we'd reached reasonable height the clouds had moved on.

The final ascent to Stob Coire Sgriodan was a cinch by comparison and we had far better views than we were expecting. The dog looks slightly perturbed here. On the other hand I'm just happy to have reached the summit after a pretty gruelling climb Giving my Hobbity feet an airing at the summit cairn of Stob Coire Sgriodain. The Hubs fled at this point. Judging by our dog's expression he's about to flee too.

Great views of Stob a Coire Mheadhoin and Stob Coire Easain on the other side of Loch Treig. We climbed these two Munros last year and appreciated the new perspective from this side of the loch. After a much deserved lunchbreak on the sunny summit A well-earned tummy rub for the dog. He's quite blissed out here

we then struck out for Chno Dearg. The boys make tracks on the way to Chno Dearg

A bit of a shin-breaker along the broad SE ridge but we all made it across intact. Tricky boulder field. So glad that it was warm, sunny and DRY. Really have to watch your step here.

So that was good. The final ascent to Chno Dearg was a cakewalk by comparision Chno Dearg. A friendly looking lump of a hill! Warm, sunny and great views on the way to Chno Dearg

and we soon reached the sunny summit. Hubs and Nudge on Chno Dearg summit cairn enjoying the sun and the views. Hubs! I think that you may have left something on the summit cairn! and then back down towards Fersit. He looks pristine here. After the boggy descent it was a river bath for this little chap.

On the descent we navigated massive snowfields on foot and by way of bum-sliding map bag. Good fun that! Bum-slid on the map bag all the way down here. It was like being back at school when the snow hit and we all went "poly-bagging" on the sports field. Great fun!

We kept a fixing on the two large barns. The gully on the very boggy descent was easily filled with 12ft or so of snow in places 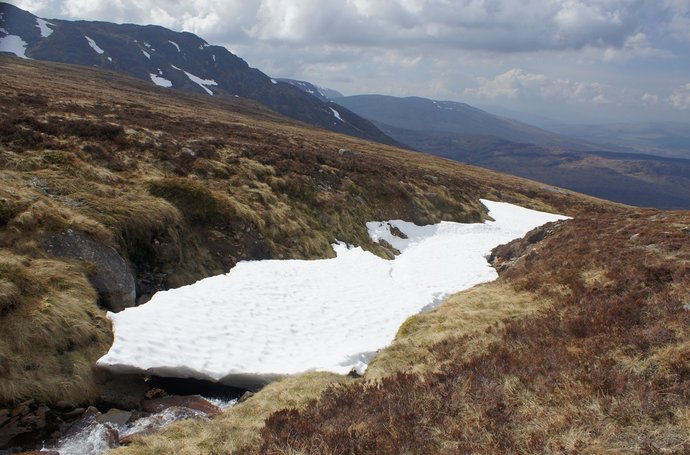 Photo doesn't do this justice but the snow in this gully was surprisingly deep.

and there were parts where the snow had collapsed and the rushing burn could be seen far below the massive slabs of snow. We walked the path alongside the gully keeping clear of the snow. Nudge fords a burn on the descent. He's just showing off here

Once we reached firm and bog-free ground we turned our attention to our boggy dog and a quick river-bath soon got him looking fine and dandy again. Back in Fersit looking back at Stob Coire Sgriodian to the left and Stob a'Choire Mheadhoin to the right. Bagged both. Oh it feels good to say that :)

All in all a good (and challenging walk).

Wow, you are fairly getting these hills bagged now that you have your back back

Another great read with some cracking photo's

Love your reports Sarah - you always look as though you are having a good time regardless!
Great photos, too!
Iain

AnnieMacD wrote:Wow, you are fairly getting these hills bagged now that you have your back back

Ahhh thanks Annie MacD. It's good to be back!!!

Thanks FifeFlyer. Just read your Mt Keen report. You sure had a good day

Bruno wrote:Love your reports Sarah - you always look as though you are having a good time regardless!
Great photos, too!
Iain

Hi Iain, thanks for the lovely comments. Yes you're right it is usually (strops aside) a blast!!! However I've a long way to go to reach your impressive tally