The omission of these two adjacent pairs of hills had rankled for quite some time. I don’t know why. They just sat there, a clutch of accessible red blobs surrounded by others that posed more of a challenge. But together they fitted one of my emerging criteria: I must spend more time on the hill than I do in the car. So, with a pair of good days forecast, I threw my gear into the car the night before and, almost predictably, slept in.

Still, light nights and all that.

MWIS appear to have discovered a new category beyond 90%: “almost certain.” Louise on the BBC backed this up by promising clear skies both in the evening television forecast and on the next day’s early morning radio version. But, as grey skies hung over Glasgow, and wipers swept the rain from the windscreen as I headed north of Stirling, scepticism grew.

“Keep the faith,” I intoned to whichever presenter was preventing politicians from answering questions on the Today programme. Past Pitlochry and the horizon finally hinted at what been promised. By the time I’d pulled into the parking space at Fersit at least one side of Loch Trieg sat in the sun. After passing the scattered cottages and barns of Fersit’s metropolis, I went through the gate and just headed off to the right. There might have been a track out there somewhere, but I either missed it or couldn’t be bothered to find it. As long as I was heading upwards and towards the skyline of the ridge, it didn’t matter. I steered myself well to the left of the 477m knoll and then worked back to the south west on a series of upward traverses through the slabs and crags below Sron na Garbh-beinne. Looking back down on Fersit

At no time did it feel punishingly steep. It was easy to maintain a rhythm and, as the sun picked out the two Munros, Stob a Choire Mheadhoin and Stob Coire Easain, on the other side of Loch Trieg, it was proving to be a pleasurably gentle day out. Starting from the car at 11.00am no longer seemed a problem. The final stretch to the top of Stob Choire Sgriodain suddenly opened up as a short scramble was completed, and the top was reached in well under two hours. Visitors to the top here are greeted by the spectacular plunging views down to Loch Trieg over 700m below. For a change, the immediate foreground comes close to outshining the snow-spattered peaks of the Grey Corries, the Mamores and the Ben that punctuate the horizon. Into the trench of Loch Trieg from Stob Coire Sgriodain

And what a contrast to the east: the rounded hump of Chno Dearg just squats there, lumpen and stolid like a comatose body huddled under a blanket.

Chno Dearg slumbers in the east

With an implied book time of an hour and twenty minutes to get there, I suspected that a series of deep clefts and rollercoaster dips were hidden from view. In the end, it was no more than a gentle stroll that was to be undertaken in well under an hour. Back to Stob Coire Sgriodain across the Glac Bhan

Chno Dearg may have no redeeming characteristics of its own. However, it makes up for this shortcoming by the view it presents across Creag Meagaidh, down the parallel troughs of Loch Laggan and Loch na h Earba, and the Munros clustered around Ben Alder. Snug in the shelter of the cairn it was a satisfying place to rest and soak things in for far longer than I would normally do.

Finally, the descent rates as one of the easiest I’ve ever experienced. With the remnants of winter still clinging to the upper slopes, the first 250m could be loped down with heels planted firmly in the softening snow. Then the tracks of a quad bike or some other vehicle made their way in an almost straight line back towards Fersit. No knee jarring, no stubbing of toes and little in the way of intervening crags or scree to avoid – just the softly cushioned ground that a well-waterproofed pair of boots could easily cope with. After such a pleasant day, there was then only one decision to be made. A wild camp on the shores of An Dubh Lochan was shunned in favour of £7-worth of hot showers, toilets and an evening stroll to the Stronlossit for a meal by camping at the Bunroy in Roy Bridge.

May tomorrow be just as satisfying.

Well-fed and well-rested, unexpectedly grey skies greeted me when parking the car by An Dubh Lochan the next morning. Once across the line of the old tramway, access to the initial ridge of Creag Fhinaclach was uncomplicated. Beyond, the steepening face of Meall Cian Dearg proved less straightforward and resembled climbing a sponge with steps. Still, although it was the worst part of the day, it was only short-lived, before it gave access to the swooping ridge ahead.

The route has been well described many times, but is essentially: keep the steep bit to your left and you’ll get to the top eventually.

By now the promised blue skies had emerged from the clearing cloud and the views were just spectacular. Like the day before, the Grey Corries and the Mamores dominated the horizon ahead and the teetering cornices to the left showed every sign of plunging towards Loch Trieg any time soon. Grey Corries and the Aonachs from Stob a Choire Mheadhoin

Creag Meagaidh in the north east from Stob a Choire Mheadhoin

Once the full view of the delectable ridge to Stob Coire Easain is seen from the top of Stob Choire Mheadhoin, there’s little point in hanging around: it’s there shouting out to be climbed. 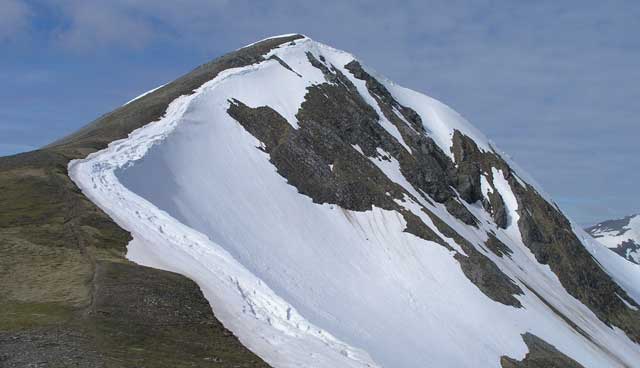 Sweeping edge of Stob Coire Easain lures you on and up

And the top of the second Munro of the day doesn’t disappoint. At the moment it is the perfect summit snow dome, with just the cairn bursting through the surface. The final few feet required a few steps to be kicked in the snow that rears up and blocks the immediate view to the west. Then it was like peeping over the top of a wall – the cairn at eye-level just a few horizontal feet away.

A place to linger and enjoy some food as well as the surroundings. Now some guides recommend a descent into Coire Laire. Why? What’s the point of dropping down into an alleyway when you can enjoy dancing back along the top of the wall and enjoying the view? It’s only half an hour back up to Stob Choire Mheadhion, a small price to pay for a far better end to the day. I’m normally one for a circular route, but on this occasion there was no point at all.

As for that value-per-hour-in-the-car measure, well 11:7 was a fair return. However, there are some days when the experience makes all the tarmac-bound hours worthwhile.

Nice one, totally agree with your time spent in the car - I have reached a similar stage in my quest, at least 2 hours drive before I get near a new munro

Am now very much looking forward to do Stob Coire Sgriodain and Chno Dearg. That view into Loch Treig!

And I have added the other two to my growing list of ‘must revisit on a clear day’ ones. Had no idea that they looked that nice.

Great report for some great hills. Will be visiting those hills for the next 2 days and your timings and pictures really helped in my planning. Many thanks for posting, really looking forward to do them now