This hill has a reputation of being a bog fest with a nasty river crossing so I've long pondered an alternative route. Neither of the commonly written about routes appealed to me - the standard one that crosses the Allt na h-Uidhe might well cause problems for one of our dogs, who has a dislike of fast moving water, (not to mention one of his owners dislikes balancing on slippy rocks

); the route from the end of Loch Glascarnoch could involve climbing a deer fence - not easy with four dogs

. (Yes the dog pack had doubled in size on Easter Sunday as our daughter was visiting with her two spaniels - this was to be their introduction to the pleasures of Munro bagging 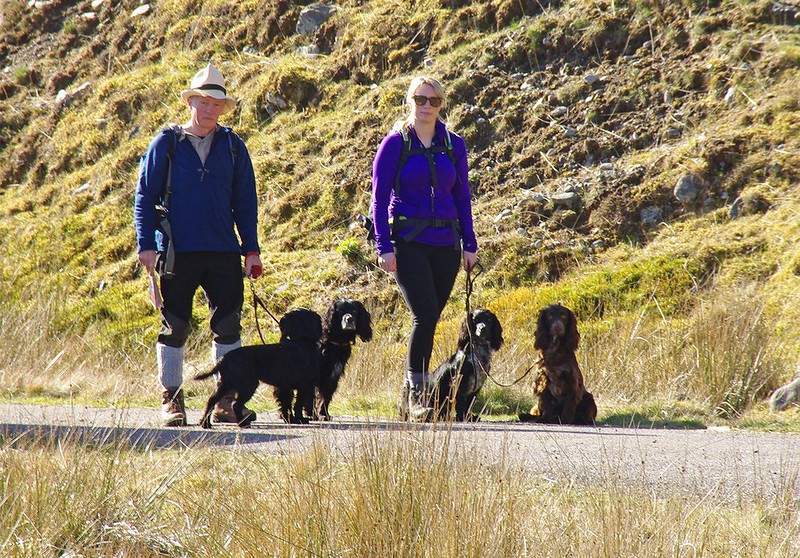 We finally decided to drive in to Loch Vaich Lodge and follow the track marked there across Tom Ban Mor and Stran Liath. On our OS map (1:50000, 2002) the track into Strath Vaich and the track across the hills looked identical so we were surprised when we turned off the A835 onto a tarmacked single track road, would this continue over the hills

our_route.gpx Open full screen  NB: Walkhighlands is not responsible for the accuracy of gpx files in users posts
Once we reached Loch Vaich Lodge we found the track up the hill suddenly reduced to an all terrain vehicle track, varying from faint to very faint in some places, but there was always just enough to give us a good route. You might say the downside is that our route is 18k, as compared with 13k for the trade route, but the extra 5k were easy peasy and certainly more comfortable than bog hopping. True there was some bog at the start, but the track goes through some very attractive birch woods, with lovely views back east over
Ben Wyvis, 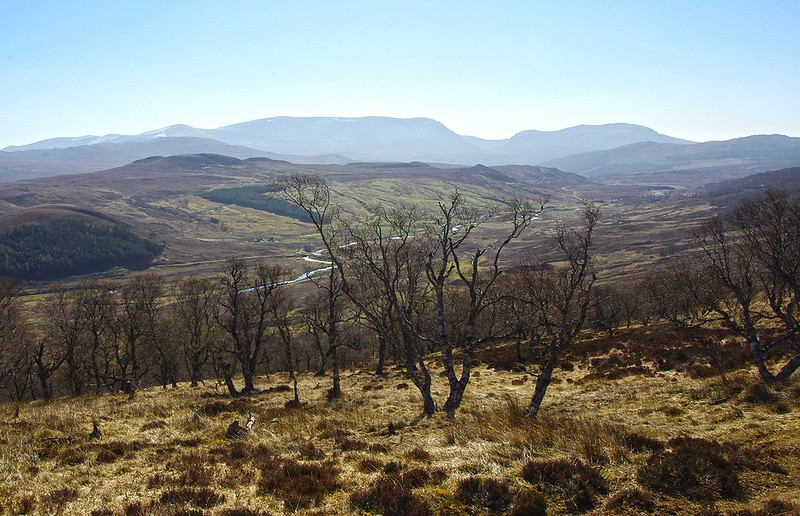 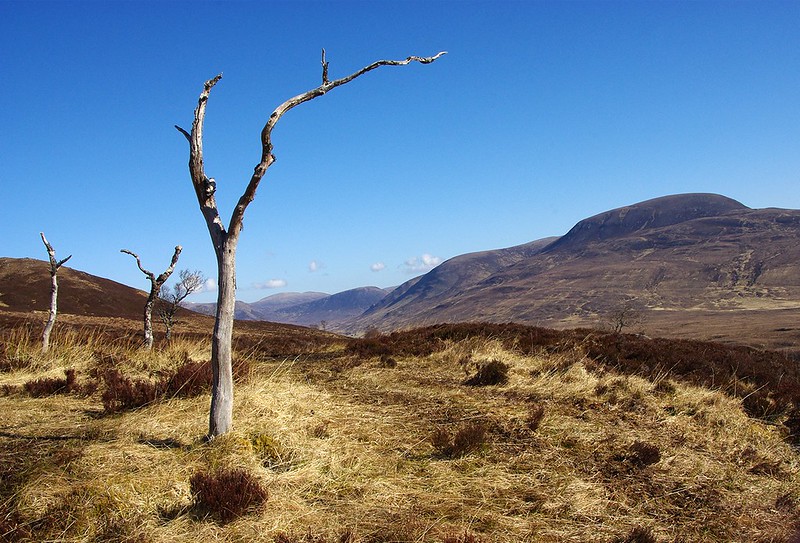 and across Loch Vaich 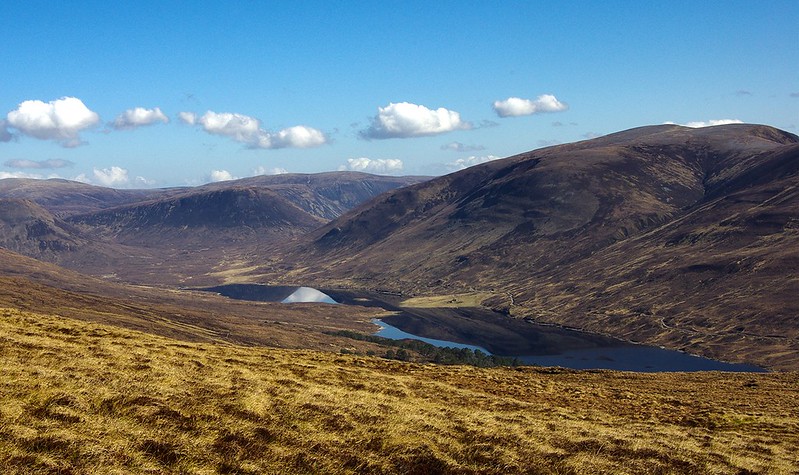 and where there are really bad hags to cross someone has thoughtfully provided 'bridges'. 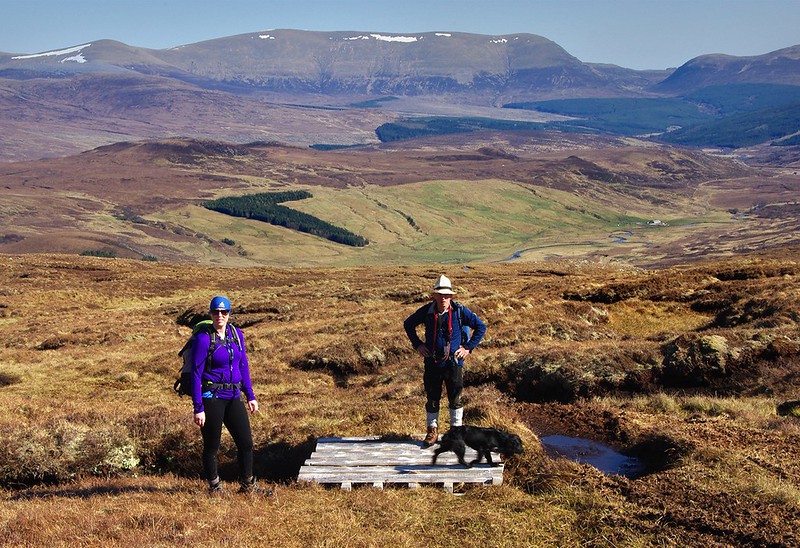 By and large the route was gently undulating, and mostly dry - with great views. However the ground itself was fairly featureless, which would make difficult navigation in clag. Even in clear weather there was a lot of map and compass checking to make sure were were heading in the right direction. 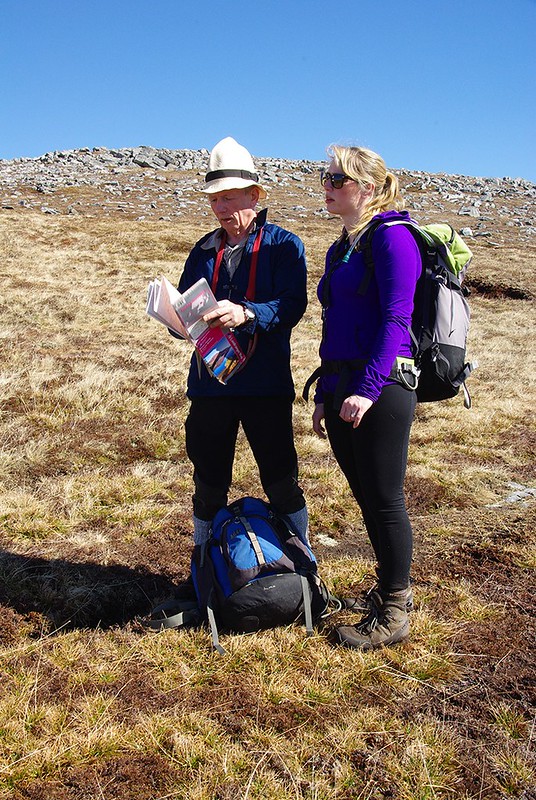 The weather was stunning - this was Easter weekend and the north of Scotland was the place to be. Once we gained some height there were beautiful views south. 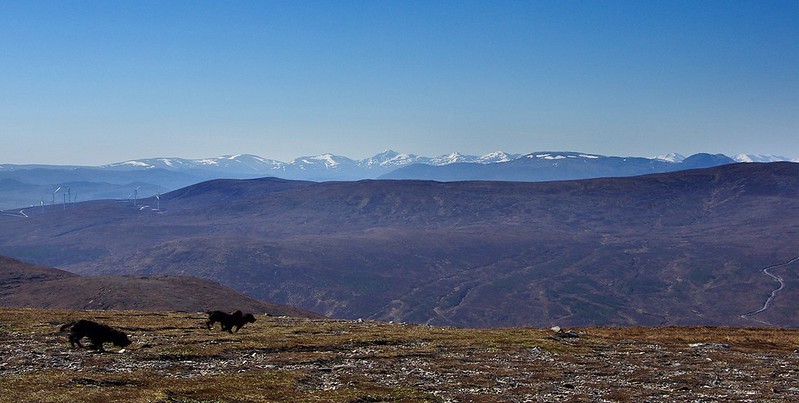 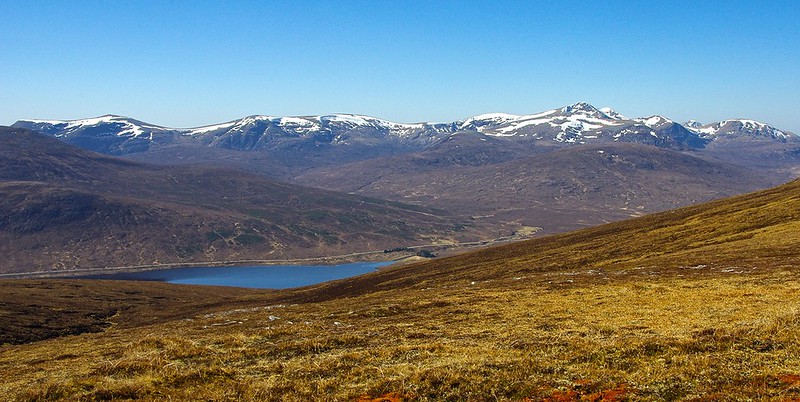 And just when they were getting hot the water loving spaniels found a swimming pool; the water hating ones were much too busy hunting down interesting smells 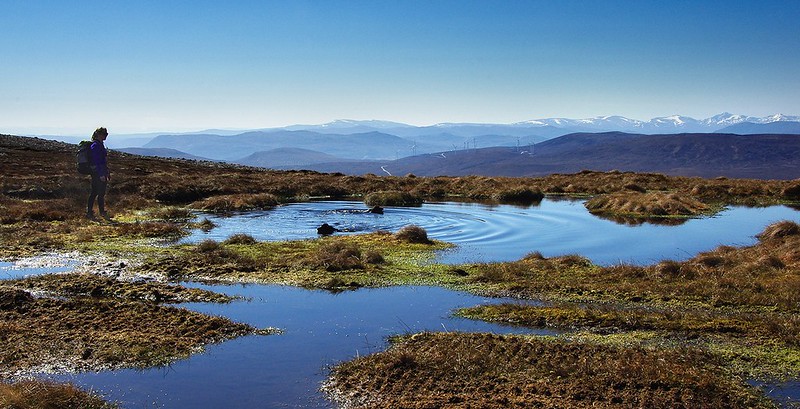 It was great fun walking with our daughter again, its been quite a while since we've walked any munros together, and her young dogs were really enjoying the day. We got into a conversation about emergency kit taken on walks and discovered she had mini flares with her - a great help for rescue helicopter pilots she claims

. Not part of my standard kit I must admit, but as she does far more adventurous things out on mountains than I do I take her point!

As we got further west the views just got better and better; 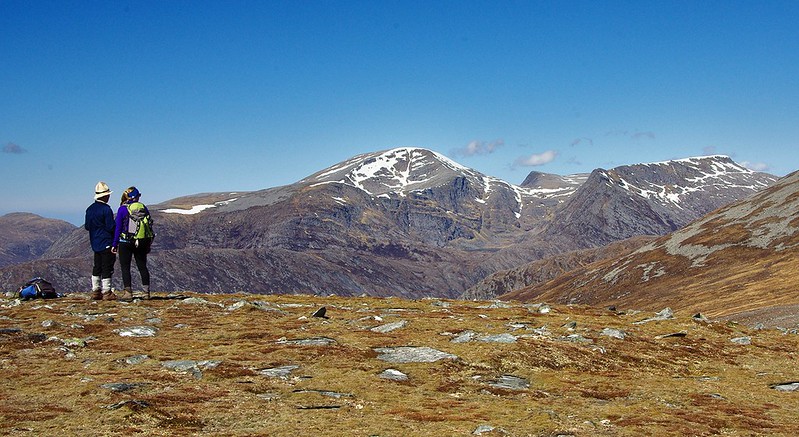 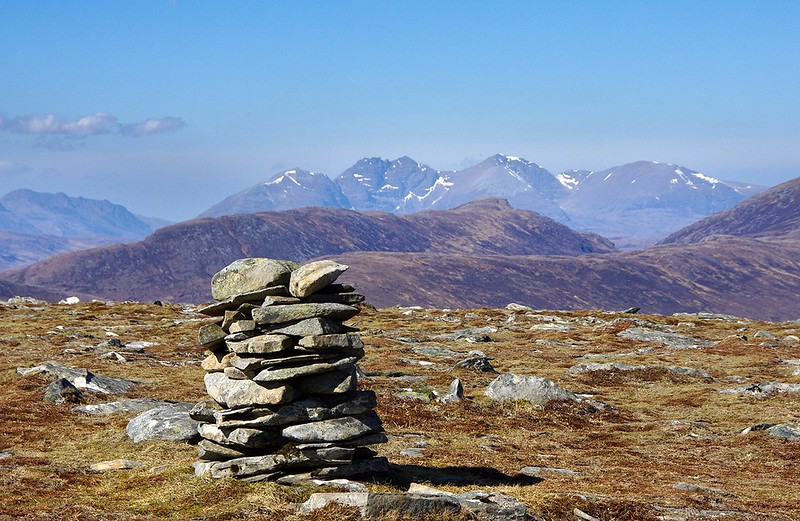 although Am Faochagach itself is a more modest creature ... 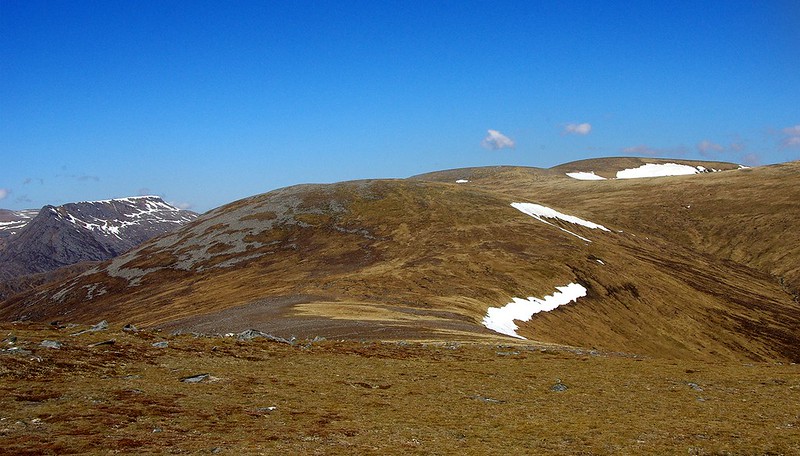 ... it's that gentle curve on the right

It does boast some fascinating solufluction terraces close to the summit ... 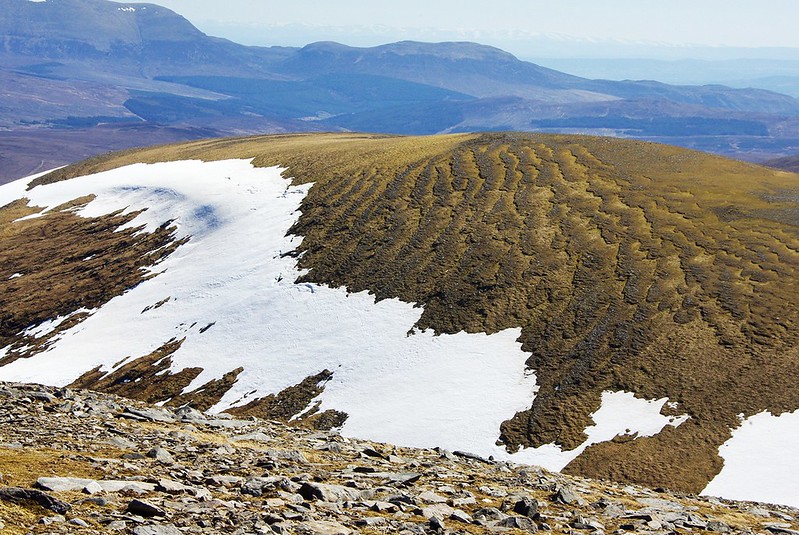 The panorama from the summit was wonderful - so we lazed about, admiring the view, playing with the dogs, eating lunch and of course taking more photos 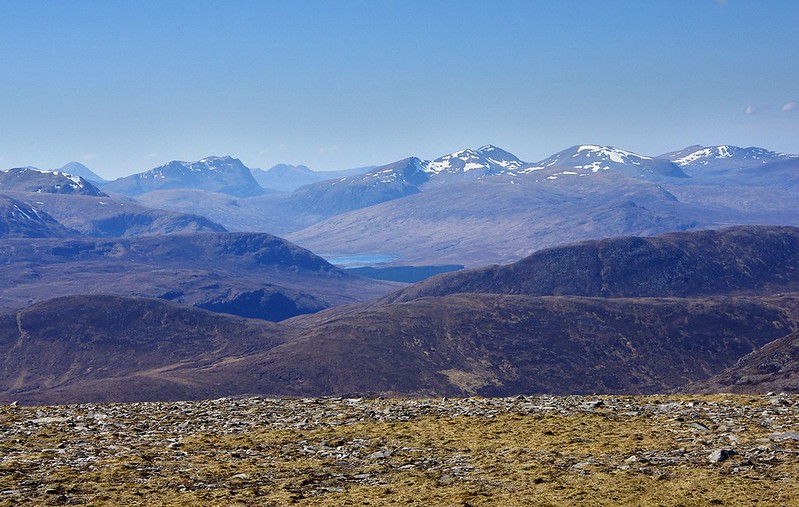 Some of the Assynt hills 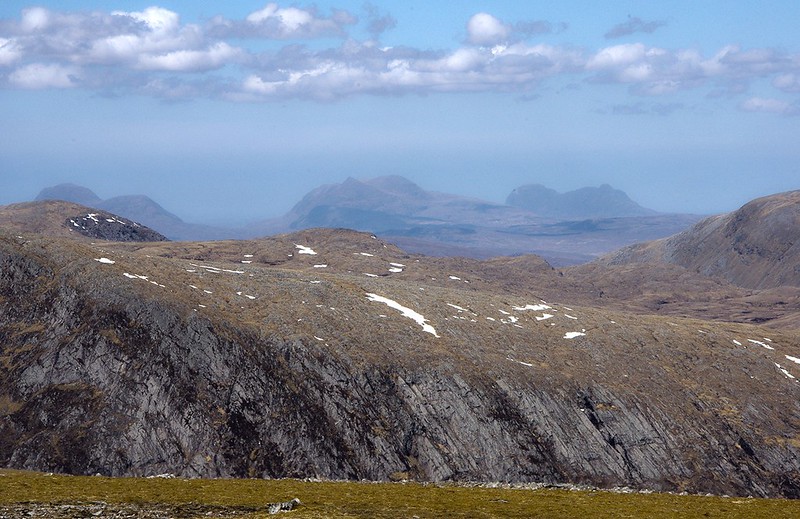 Down time with dogs 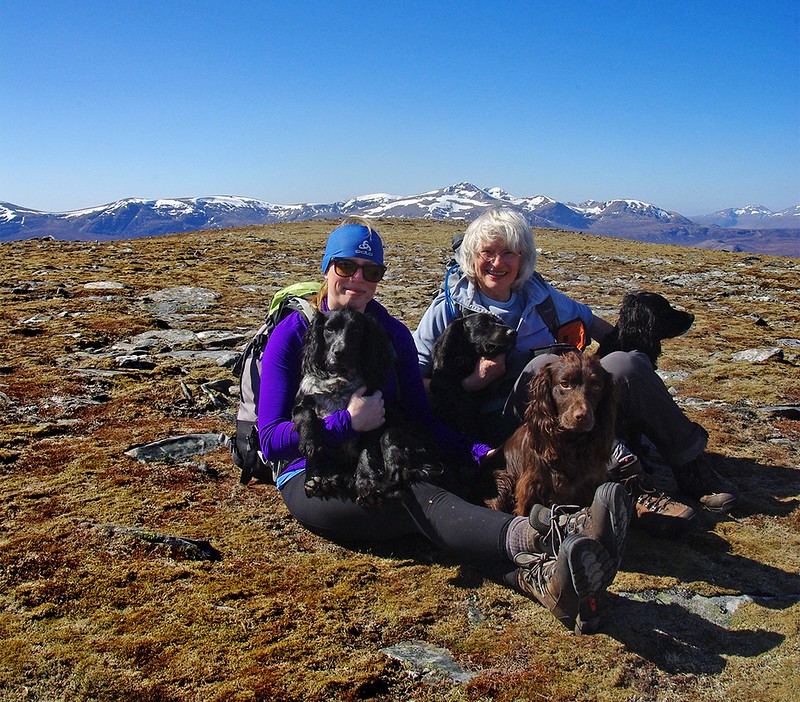 There was steady traffic at the top - not really a crowded Munro, but it wasn't being neglected either. Most people seemed to have come via the standard route across the Allt na h-Uidhe 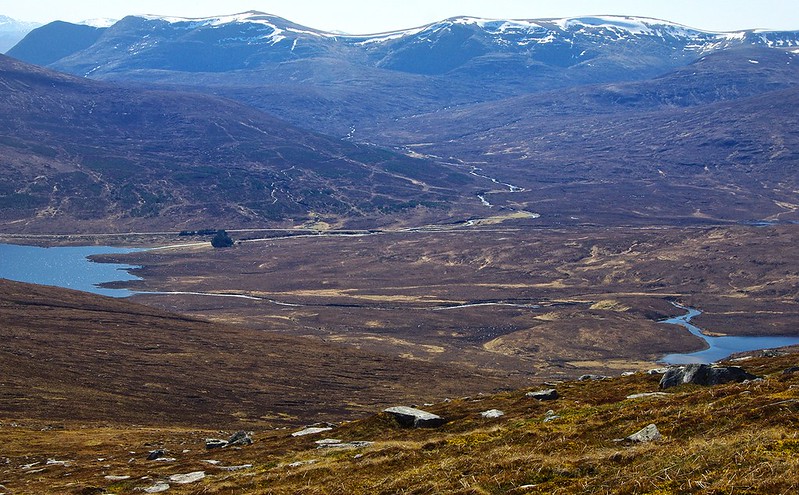 although we did meet some people who climbed from the end of Loch Glascarnoch (or was it Black Bridge?) - who told a horrendous tale of bogs and peat hags - on our route home we could see across to the route they'd taken - looks hard work. 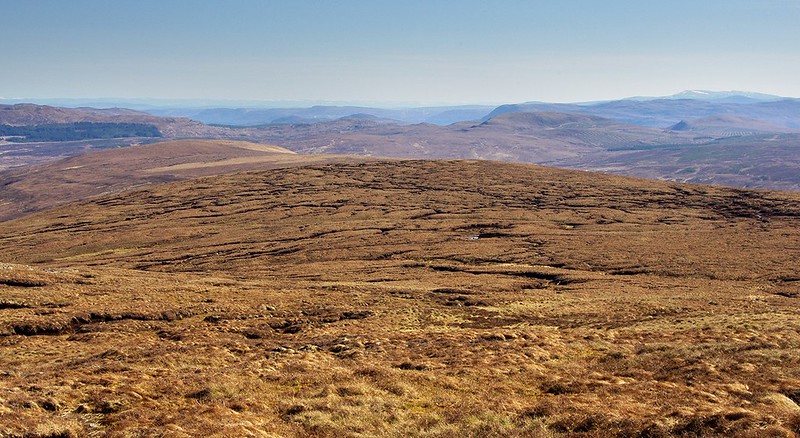 We retraced our route back to Strath Vaich, never 100% sure we were following the same faint path - yes this terrain is pretty featureless - but when one of the dogs discovered the bone he'd found and carried on the way up we knew the navigation had been spot on 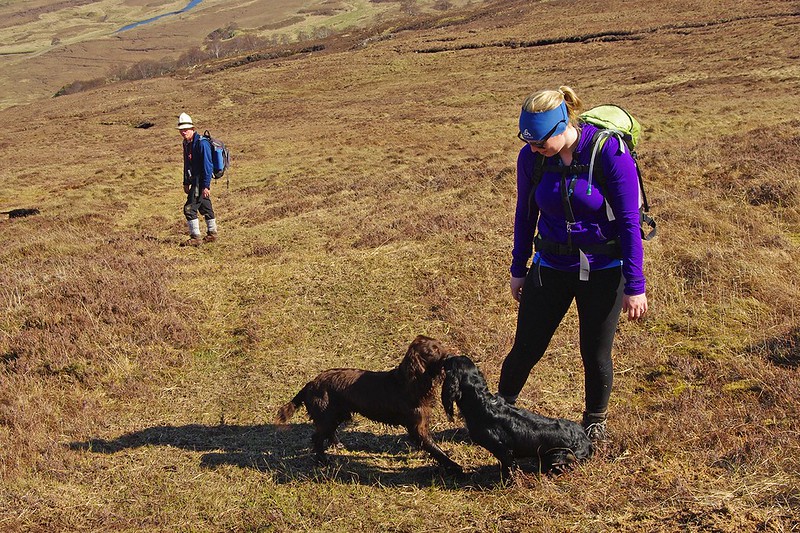 Newbie paws enjoyed the walk, but were obviously getting tired by the time we got back to the car. B&B were demonstrating that 'oldies' have more stamina for the hills ... a case of life in the old dogs yet

As for our evaluation of the route:

a) its easy in good weather, could be problematic in the clag;
b) its longer, but that allows a greater appreciation of the mountains around Am Faochagach
c) the road in was good but no real parking and few passing places, but it would be possible to cycle from Black Bridge to Loch Vaich Lodge
d) no river crossing or should that be - NO RIVER CROSSING

This looks an interesting alternative to the usual route which, when I did it, involved a thigh level wade!

Some excellent photos here - love the one of you with daughter and 4 spaniels!

An interesting route and great pics

dogplodder wrote:This looks an interesting alternative to the usual route which, when I did it, involved a thigh level wade!

Some excellent photos here - love the one of you with daughter and 4 spaniels!

Bertie would have refused to go anywhere near such deep water.