Following the fence of doom towards 2 Drumochter Munros

Following the fence of doom towards 2 Drumochter Munros


Thick grey rain clouds covered the sky when I drove up the A9. Certainly not my preferred day to climb hills, but at least I would not have to walk alone as Sandy another Walkhighlands member was behind me in his van, equally keen to breath some hill air again

. Our plan was to complete A' Bhuidheanach Bheag and Carn na Caim with 2 cars, which is probably the quickest way.

Having parked the two cars a few miles apart from each other, we set off into the clag. There did not seem to be a path, but from the map we decided to follow the fence, which was clearly visible ahead of us. Aiming for the grassy bit to avoid the heather, we were soon swallowed up by dense cloud. It was an eerie feeling and without the help of our GPS systems, we would have been hopelessly lost after the first half an hour. The fog which rolled between the heather seemed to have swallowed up the noises from the busy Motorway below and now and then we could smell the decomposing smell of dead animals around us -lovely??? 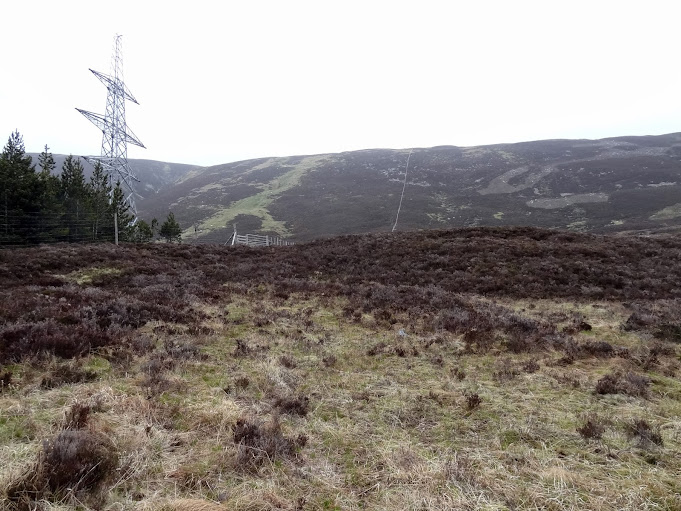 The start of the walk...stick to the fence line.

Climbing higher, keeping the fence line to our right, the wind picked up and I was soon in 5 layers of clothing much to the amusement of Sandy, who bragged that he only needed 3 layers. It was cold and soon tiny droplets of damp covered everything. On a plus site we had reached the top of the plateau and were able to walk reasonably quickly to the first Munro of the day A' Bhuidheanach Bheag.

Sitting down for a quick bite to eat, the cold did not take long to sink into our bones and by the time we set off, we promptly walked to the wrong direction.

Luckily we checked the GPS and noticed our mistake before we had walked too long...it was so easy to get lost here and not really helpful the fence had disappeared close to the summit. 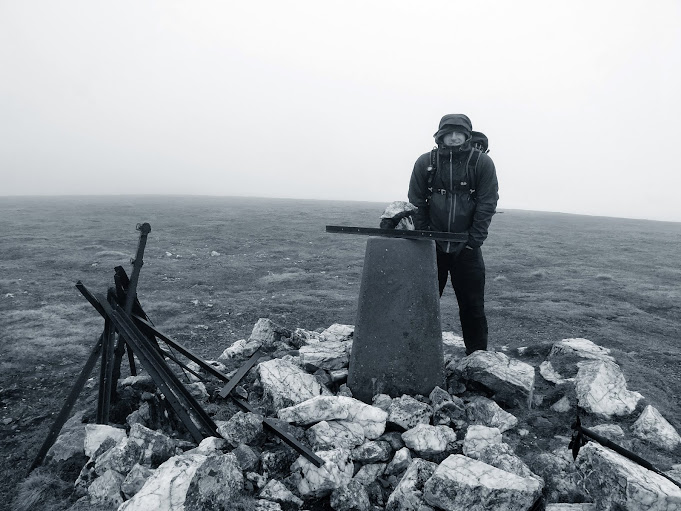 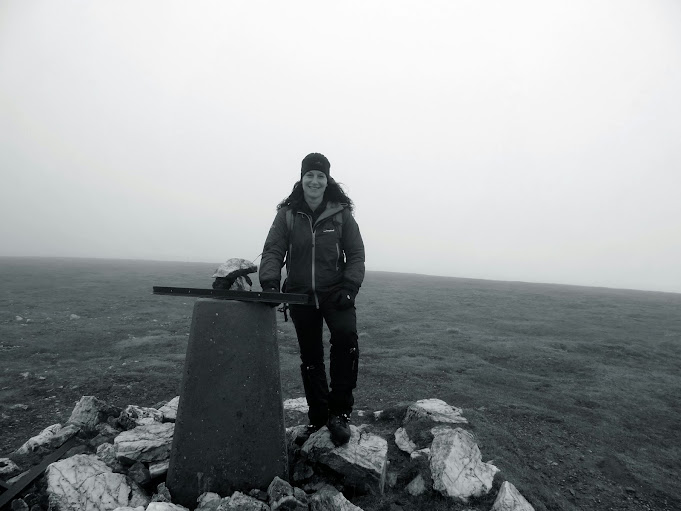 Wrapped up warm before the rain started

Walking with a close look at the GPS, the fence loomed out of the clouds again and we set off to
Carn na Caim.
So far we had only seen one other person who had disappeared as quickly into the clag, as he had appeared. A slight rain had set in and without realizing at the start of the day, we had picked the right direction (from south to north), as the wind was pushing us forward apart from hitting our faces.

Looking down we spotted a half eaten leg bone of a rabbit,

spookily the paw still had some fur attached to it.

Not much further on, a strange looking bird lay decomposing on the path

and Sandy muttered ...’its the fence of doom’. Looking around he could not have found a more matching name. Especially when we came across peat bogs, which would have fitted a Lord of the rings scene perfectly. 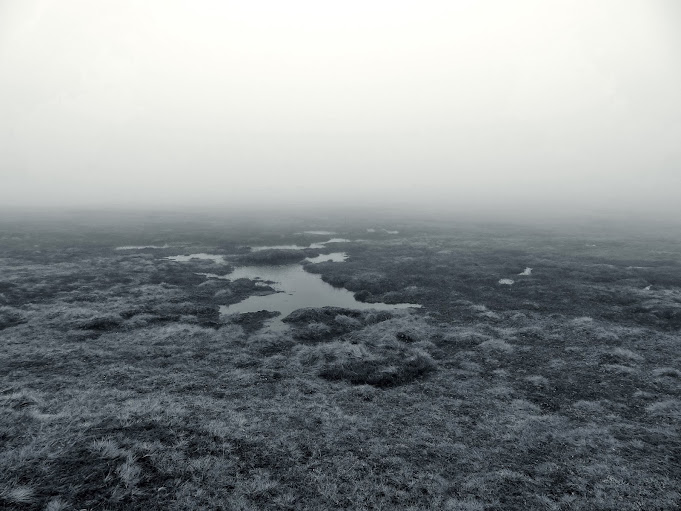 We walked through the soft bog, sinking into the ground and the path along the hills seemed to carry on endlessly. When we stopped for a water break, Sandy realized that the path of doom had taken another casualty. His water bottle was gone. Looking everywhere the only conclusion was that the fence had taken its payment. He was not very happy,

as it was his favorite bottle and had been his companion since years. Moving on I was close to a heart attack, when I nearly stepped on a wee rabbit which (with a strange high pitch scream) ran away by the time I nearly stepped on it. The next time I nearly jumped out of my skin, when a ptarmigan flew into the air right next uttering its protesting scream, which I shall never get used to. 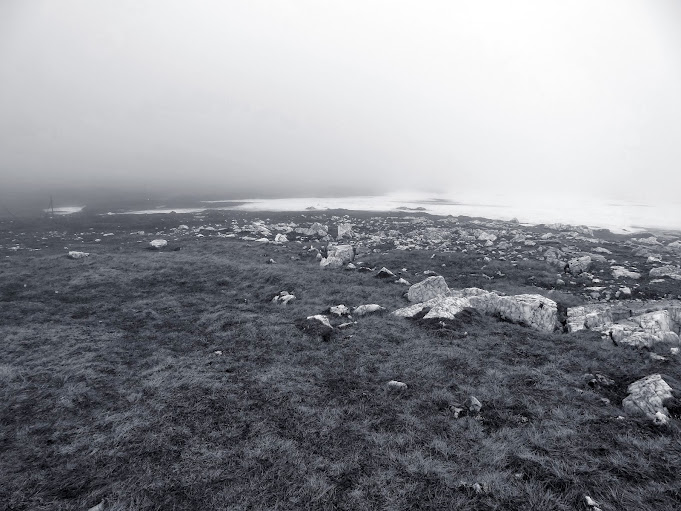 But despite everything we were in high spirits, after all, those are the days when company is vital and even more when you discover you are equally mental lol.

The rain which had kept itself to a wee drizzle suddenly decided to change into a heavy downpour. Hoods pulled deep into our faces, we plodded on and luckily reached the top of Carn na Caim without any further issues. 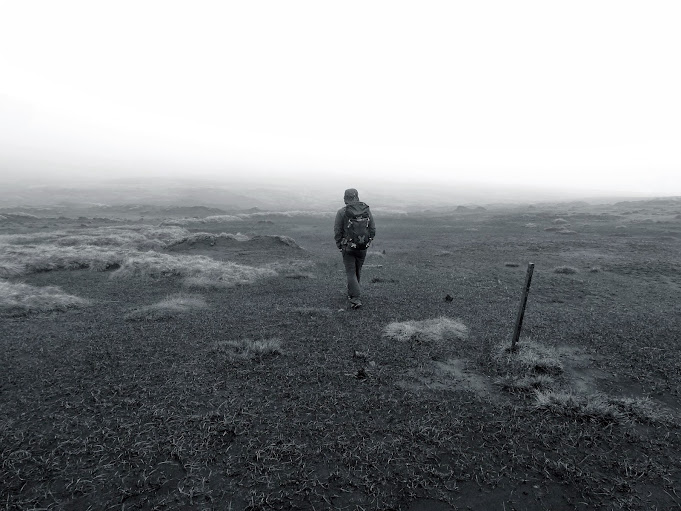 Walking into nothingness along the fence of doom

Not feeling the need to hang around, we took a quick picture and returned, this time with frontal wind and rain. We both agreed that we certainly had better days, but at least we had ticked of 2 Munros and were back on our way to the car. With soaking trousers we arrived just 4.45h after setting off and we both congratulated ourselves for having taken both cars, as the walk back the A9 would have been endless in the heavy rain. 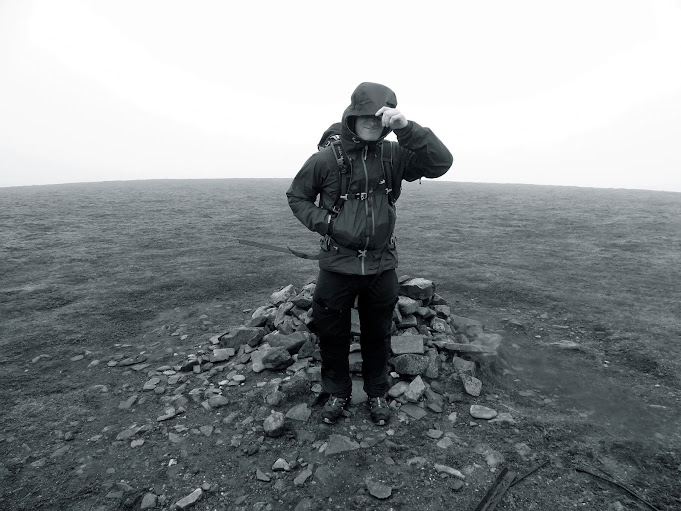 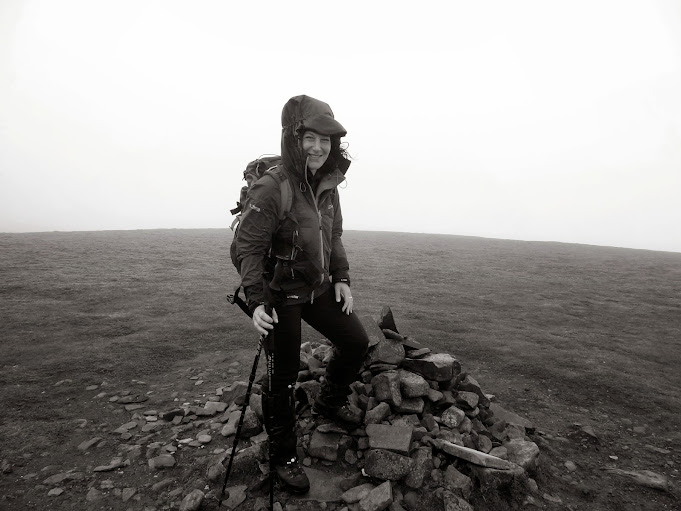 Nothing shall dampen my spirit

Dropping Sandy off at his van, he waited outside while I changed into my dry jeans inside it (great changing room on a wet day) and smirked when I got about and mumbled something about first naked woman in his van (Men!)

Having said our good byes we were off in different directions and looking back up the hills, now hidden by heavy rain clouds, I decided that even rainy days sometimes add to the atmosphere and will certainly make me appreciate sunny days even more.

Re: Following the fence of doom towards 2 Drumochter Munros

Ah, the Fence of Doom - great title! Happy there were no more casualties and that you saw the humour in it all. Agree about really appreciating the sunshine more if you have really experienced the rain. Really like your choice of B&W processing as it really captures the atmosphere.