*
Rewind to last September, and our previous visit to Glen Nevis, Neil and I couldn't decide what to do on our last day there,we'd already been to Glencoe, and tried the Ring of Steall (but failed I'm afraid!) so we opted to go up Ben Nevis (again!...this would be my second time, and Neils 5th!) so we set off up the Mountain Track, reached the summit, took a few pics...and set off back down again!
Now, I must say I REALLY admire the guys/gals that make and maintain these paths up our mountains, it's not a job I'd welcome, but considering the fact that this was Ben Nevis and the enormity of that task, the actual path itself is excellent really, but I have to admit that on that descent I thought to myself..." This is boring, there's no view, there's too many people, and they're slowing me down.... and my knees hurt!" I decided then that I'd NEVER set foot on that route again!
The following week when I returned to work, I was talking to a colleague about our adventure, and he said " I'd love to go up Ben Nevis, but I want to drive up, do it, and drive back the same day!" Now, we live and work in The Borders, so I explained that that would be a VERY l...o...n...g day, and besides I promised myself I wasn't going back up that route! Nevertheless, I eventually agreed to go with him, but it would have to be in the following Spring.
The agreed date approached, and a few other people wanted to come along, but the "up and back in a day" aspect really didn't appeal to me, so Neil and I agreed to head up the day before, and meet the others on the day of the slog, sorry, walk, up The Ben, we obviously planned to take advantage of our extra time there and hit a couple of hills on the day before, we decided to go for Stob Ban and Mullach nan Coirean.
Anyway...onto the actual walk! We parked in the car park next to the Lower Falls, paid our £3 (is it free to park in the small car park on the other side of the bridge?) we crossed the stile, went through the gate, and headed up the path to the left of the burn. The weather at this point was FANTASTIC! Clear blue skies and a gentle warm breeze, I actually thought of leaving my waterproofs in the car, but the forecast was for rain later, so I pushed them to the bottom of my rucksack, hoping I wouldn't need them!
We made good progress, pausing to take pics or to have a a drink, but we still quickly gained height, with Sgurr an lubhair and Stob Ban soon coming into view. We crossed a couple of boggy areas, and a couple of small burns, the path soon reached a plateau, where we could see the ridge ahead. A quick lunch at this point, and then we pressed on, reaching the ridge, we joined the path from lubhair, and the wind almost blew us over! We were obviously quite sheltered on our ascent, but this was something else! We had to endure this buffeting all the way up Stob Ban, and along the ridge to Mullach nan Coirean, there were a few occasions when we had to stop and wait for it to die down a bit, as it was blowing from the South we kept to the left of the path where it went a bit too close to edge of the ridge...just in case!
I'm still quite inexperienced when it comes to scrambling, but I really enjoyed the ascent of Stob Ban, over the white quartz, was quite exciting! We didn't hang about at the top due to the wind, but quickly descended and followed the grassy ridge over to Mullach nan Coirean, this was an enjoyable walk, but the summit was a bit of an anticlimax after Stob Ban. The dark clouds had now rolled in, and the rain started on our descent, the good path we were following became a qaugmire, I slipped and landed on my a*se a few times, at one point I went in up to both knees! Not nice, I can't say I enjoyed this descent! We reached the car, totally soaked through, 6hrs after setting off, not bad going we thought! Admittedly, we're not sure if we followed the correct path on the way down, we stuck to the left side of a fence, but in the heavy rain, we couldn't see another path, although there may have been one!
All in all, we had a great day,despite the weather and the conditions underfoot on the descent ,I'd been looking at these two for a while, and was pleased to get them finally bagged!
Some pics of the day..... Looking ahead at the start of the walk. Looking up Glen Nevis, with Meall Cumhann in the centre, and a slightly snowy Aonach Beag just to the left (pls correct me if I'm wrong!) The burn on our right! Sgurr an lubhair (I think!) on the left and Stob Ban on the right. A waterfall. The path goes up to the left of it, it's a wee bit crumbly! Neil going up the crumbly path next to the waterfall, if he falls it'll be into a pool so he should be wet but ok... he didn't think this was funny! 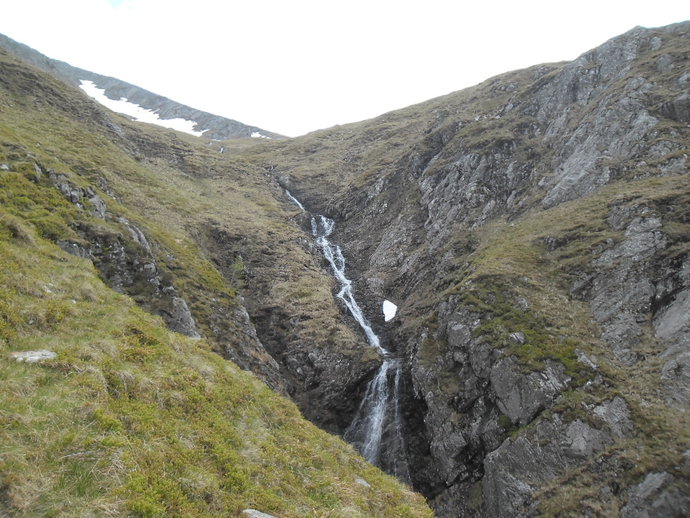 Another waterfall, further up the path! The (Devils!) ridge across to Sgurr a' Mhaim. Neil holding his own in the wind on the ridge, looking at Stob ban. Could also be Stob Ban, dark and foreboding #3! Neil,nearly at the quartzy scrambly bit, or Stob Ban, dark and foreboding #4! Some interesting rocks from the ridge. Ben Nevis with its head in the clouds. I hoped that the weather would be like this the following day.....it wasn't! Summit of Mullach nan Coirean, and the ridge we descend to get back to the car. Looking across to Sgurr a Mhaim and Stob Ban, with the Ring of Steall behind...we'll get you this year...promise! Neil on the descent, before the terrible path started, this bit was quite good and good to walk on...little did we know what lay ahead!

As to the Ben Nevis trek the next day ( if you're interested!), Neil and I met with the others at the Ben Nevis Inn at 8am (they'd left Galashiels at 4.30 that morning!) we set off up the track and the youngsters left Neil and I standing, we saw them once more, in the distance, and that was it! Neil and I passed the Red Burn, and just started on the zigzags, we couldn't see much further than a few metres, my legs hurt, we were soaked through (again!)... I stopped , remembering how I felt the last time I was here, I turned to Neil and said "I can't be a*sed with this, do you fancy heading back down?" his immediate reply was "YEAH!" so after a quick text to the guys ahead of us, we headed back down, went back to the campsite, had a shower, and headed into Fort William for the BEST McDonalds meal I've ever had!
A couple of Ben Nevis pics,,,,none of the summit tho!.... Neil on one of the (soon to be replaced) aluminium bridges. This guy was on his way down, carrying a brick hod...full of bricks...whatever!

The others made it to the summit, and we met them in McDonalds afterwards for a blether before they drove back down to Galashiels, they'd got drenched, but had enjoyed themselves, and felt the long drive was worth it, rather them than me...I had a few pints at the Glen Nevis bar that night and drove back the next day!

nice report and pics...did these two on monday a fantastic walk,stob ban is stunning,and yes it is free to park in the wee car park over the bridge.