Rest Dodd and The Nab, the long way round

Rest Dodd and The Nab, the long way round

Wainwrights included on this walk: Rest Dodd, The Nab


This was a very rearranged trip - it was supposed to be my first weekend in the Eastern Fells, but I'd kept missing bits out of other walks due to weather and other small disasters, so that first I was squeezing in a couple of leftover hills, and then realised I really needed an extra day for it. And then once I'd pencilled in the last weekend in March I discovered that I was busy on the Friday night, then realised I was planning to be off work on the Monday for other reasons, but hadn't quite grasped that that meant I could use Monday.

So when it all settled down, I was going down from early Saturday to Monday afternoon, with the only objective for the first day being to finally do Rest Dodd and the Nab, so that I could go across the Kirkstone Pass into the east the next day. Since a plain up and down was a bit dull, my plan was to head up Fusedale onto the Wether Hill ridge and follow it round, taking in a scattering of minor tops in passing just for the sake of it.

So I arrived in Penrith having got a far too early train down, and went to Booths for breakfast before getting the first bus down to Pooley Bridge and the boat to Howtown. Ullswater was looking misty - not enough to make local navigation difficult, but I'd wanted to see if there was snow lying on the hills further down the lake. I knew they'd been more or less clear at one point, but then more snow had fallen in March - it was supposed to be lying over 800m, which was about what I'd touch on High Raise, so it wasn't likely to be much of a problem, but I still wanted to know. 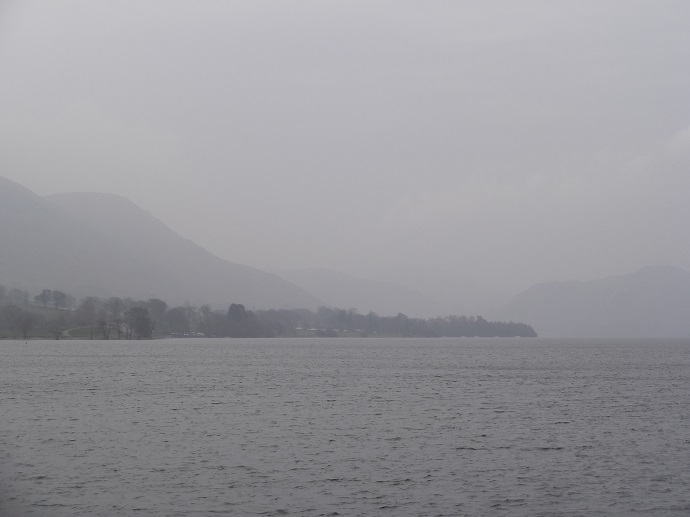 Things had cleared and brightened up a bit by the time we got to Howtown, although the wind was blowing off the shore enough that we had a bit of trouble tying up.

I've been up Fusedale before, but enough later in the year that it looked quite different - I was also interested to find that the pull uphill seemed a good bit easier this time, since I didn't think I was very fit after a fairly lazy winter. The valley didn't look misty, but looking back towards Ullswater I realised that there wasn't much to be seen beyond it. 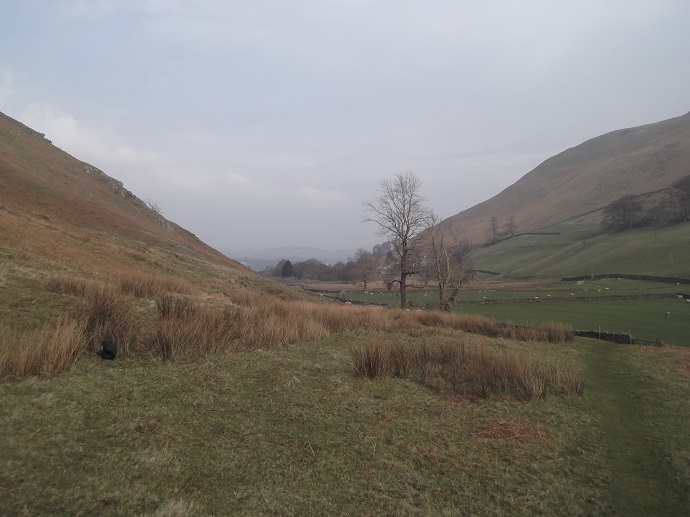 At the top of the valley I headed over the the right towards the ruined buildings, to climb Brownthwaite Crag and Gowk Hill - not there I have any intention of bagging Birketts, but they were there, and looked quite nice. I think I must have cut over too soon, as I did a bit more down and up, and got mixed up in more wet bits, than I intended, but I got sorted out, and then headed back up towards the main ridge. 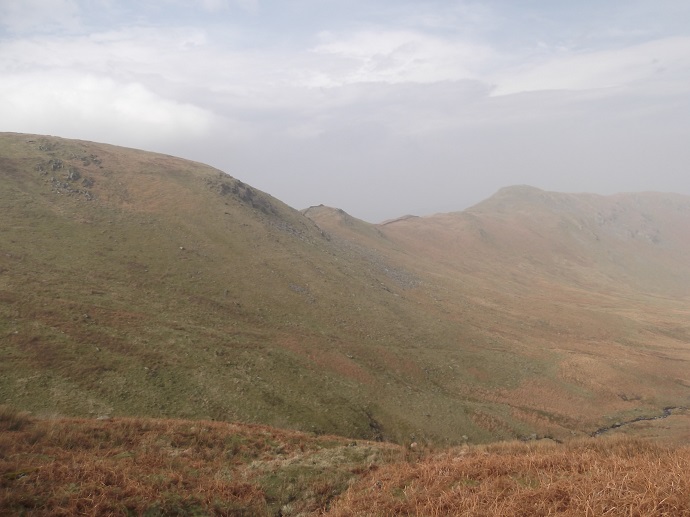 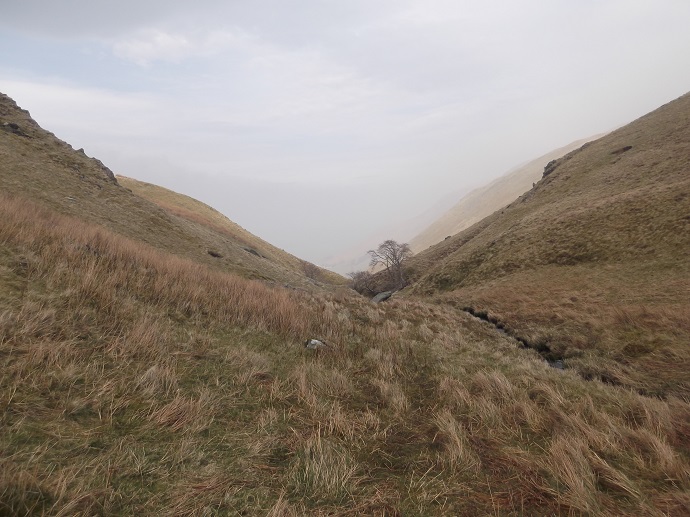 It was difficult to tell whether it was getting mistier, or if I was just getting closer to mist that had always been there. It was quite pleasant for most of the way up the hill, as if I was walking in my own small moveable world - easily able to see around me and where I was going, but nothing beyond. Near the top I found my first bit of snow, tucked into the bed of Mere Beck with the stream running underneath. 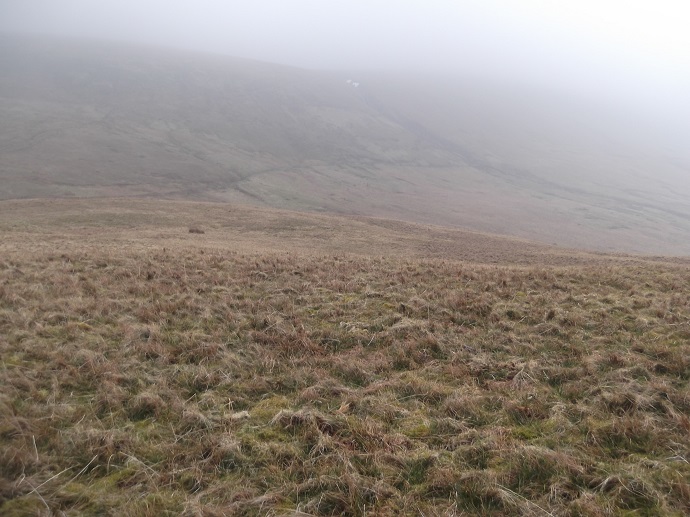 Coming out on the top I had intended to look for the top of High Kop, but since it seemed to be all mixed up in peat hags I decided that discretion was the better part of valour - there was enough wet around without going looking for more. The flat top of the ridge was in about its worst possible state - almost no snow still lying, but all the meltwater just lying there where it had been left, and the grass brown and sodden. I'd come out on the top more or less when I'd predicted, which I was pleased about, and it was getting on for lunchtime, but with everything so wet I decided that the cairn on High Raise would be the best place to eat.

I followed the clear path south, trying to avoid the wettest bits, and after a while there was no doubt that the mist was getting worse - it was never worrying, because I could always see the path ahead and the fence I was walking parallel too, and when it cleared a bit the wall running in to meet me - but it was a bit dull considering that the views hadn't been all that inspiring to start with. 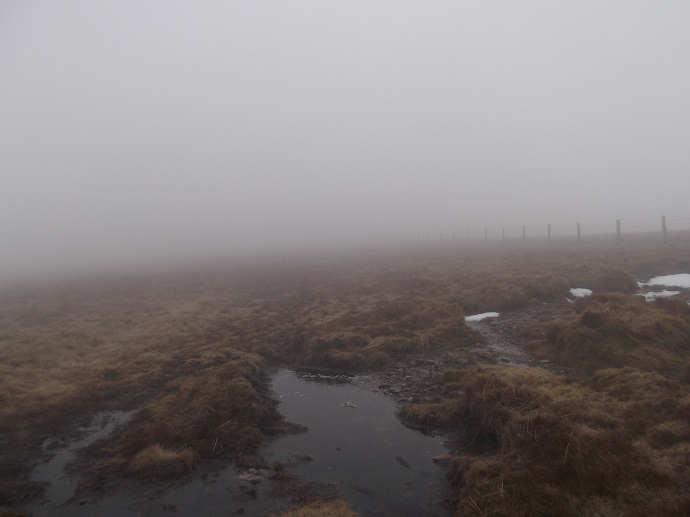 By the time I got to the stile near High Raise it was clearing off again, and I had a view over to Low Raise. I could also actually see the outline of the Nab, which had been mostly hiding in the haze until then, which seemed like a good omen.

The wind shelter at the High Raise summit was full of snow, but I sat down for lunch on the edge of the cairn, and met my first other walker of the day there, coming up from Low Raise. He was properly kitted out in winter jacket and gaiters, and seemed to look a bit disdainfully at me in my fleece, sitting on my waterproof jacket, but I always get warm when walking - I had cooled off by the time I started off again, to be fair, but I soon warmed up again. I met a few more people after that - between Angle Tarn and High Street generally seems to be busier, if anywhere in the Far East can be called busy.

Rest Dodd always looks a bit intimidating - bigger than it actually is - which is mostly why I'd never made it up before. The Knott may be bigger, but by the time you're up onto the ridge you're basically there, so you never have to look at it and despair.

It turned out to be the way down off The Knott that was hard work - a slow wet slippery descent beside the wall that I ended up doing mostly, if not quite on my bottom, at least crouched down so I'd have less far to fall - I'd rather be comfortable than dignified. Back up wasn't so bad, and I was finally on my first new Wainwright of the day. 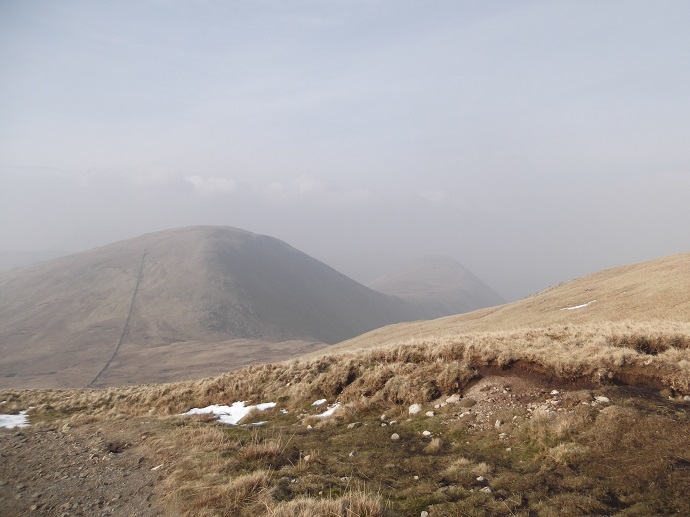 Rest Dodd from The Knott 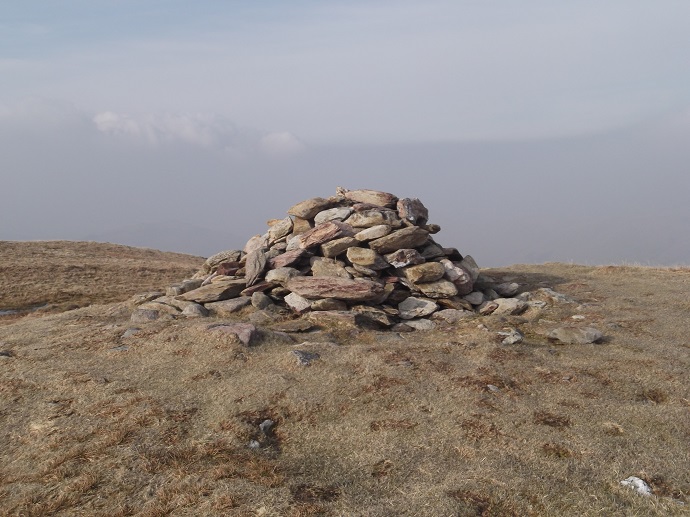 I'd been worrying a bit about the way down the north side of Rest Dodd, which is where I met uncrossable snow the same time last year, but it was fine - easier than the way down from The Knott.

It was pretty windy, which made crossing the wobbly stile at the edge of the steep drop a bit nervewracking, but it was just a case of being brave! I hid my bag in a gap in the wall - the advantage of a new grey bag is that it looks so much more wall-like than the purple one - and set out for The Nab, which turned out to be a bit of an adventure - up and down and in and out and round about peat bogs, until eventually I came out the other side and headed for the summit. 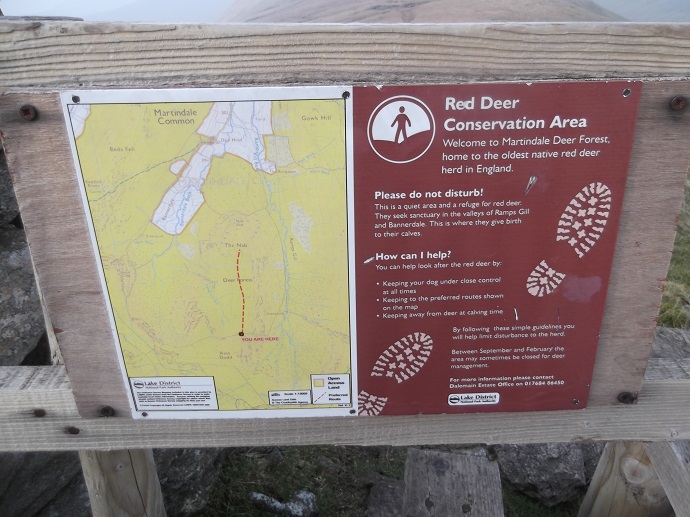 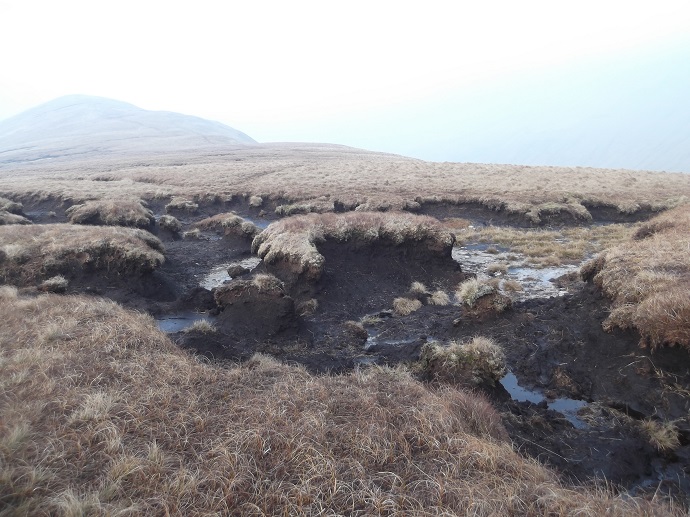 At the summit I finally looked at the Wainwright book, and realised that I should have done that before, as it told me that I could have avoided the peat hags by keeping to the right. The way back was much easier, although possibly not as much fun. 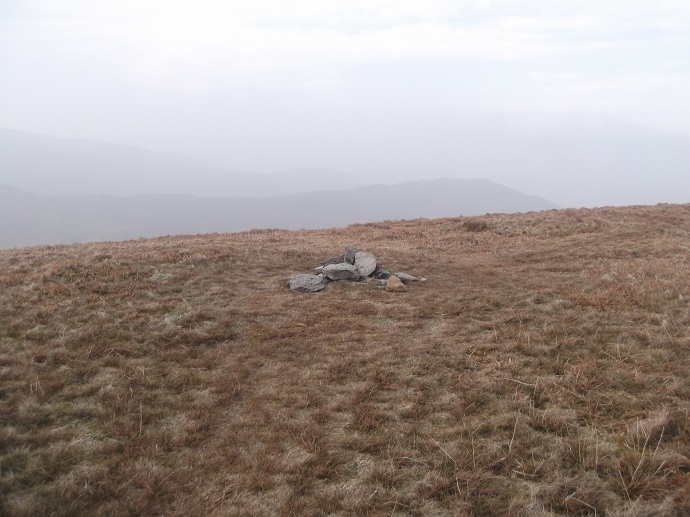 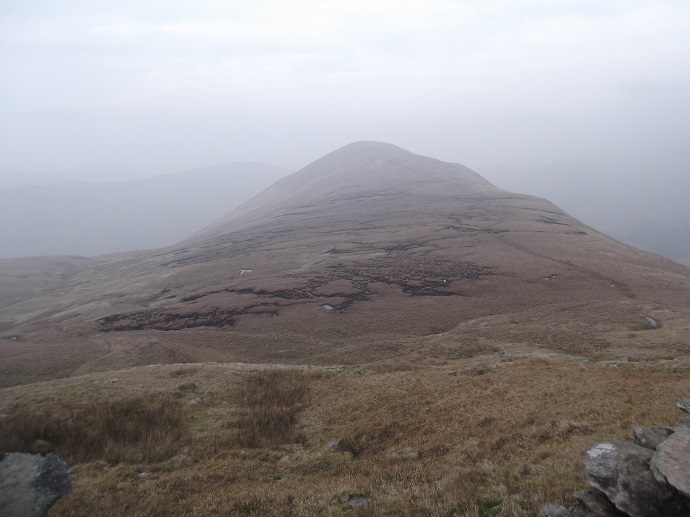 Looking back to the Nab

From the stile I didn't head back up onto Rest Dodd, but just followed the wall up towards the Angle Tarn path. I hadn't seen anything of the deer when I was inside the forest wall, but as I headed up I realised that this was because they were all on the flattish land at the top of Yewgrove Gill. 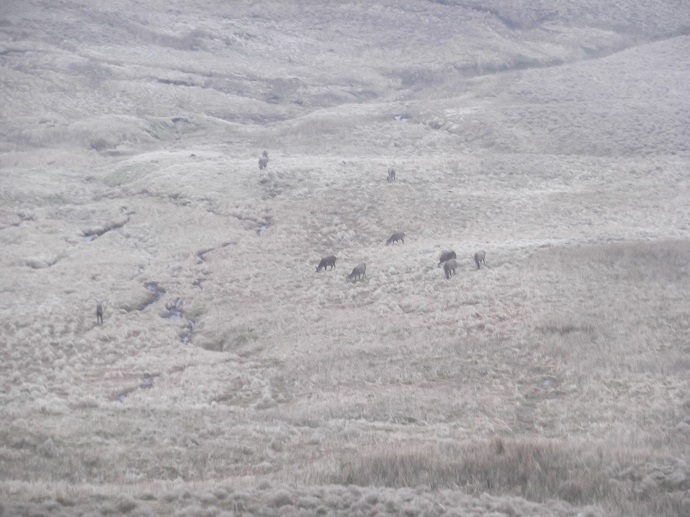 The day had cleared up pretty well where I was, but there was still some nasty looking weather sitting on the main ridge, and I could see it trying to creep down towards me over Haweswater, which made quite a dramatic scene. 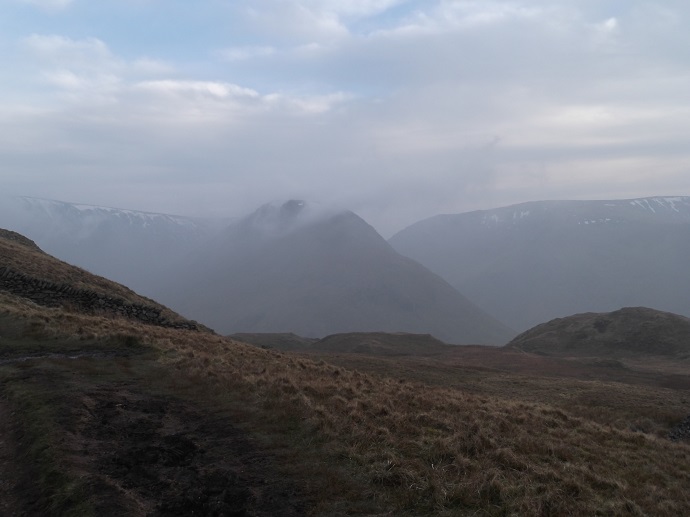 I managed to lose the main path quite spectacularly after that - I had seen it coming down towards me, gone to meet it, and must actually have been standing on it when I decided that it was still over to my left and set out to look for it. The problem seemed to be that I met it at a bit where it was earth rather than stone and didn't recognise it...

Just before Angle Tarn I had my second encounter with the deer, as they came tearing over the hill from the right, across the path, and vanished somewhere behind Brock Crags.

I thought for a while that Angle Tarn had no one camping by it, for the first time ever, but they were only tucked in by the slope, instead of out on the promentary. 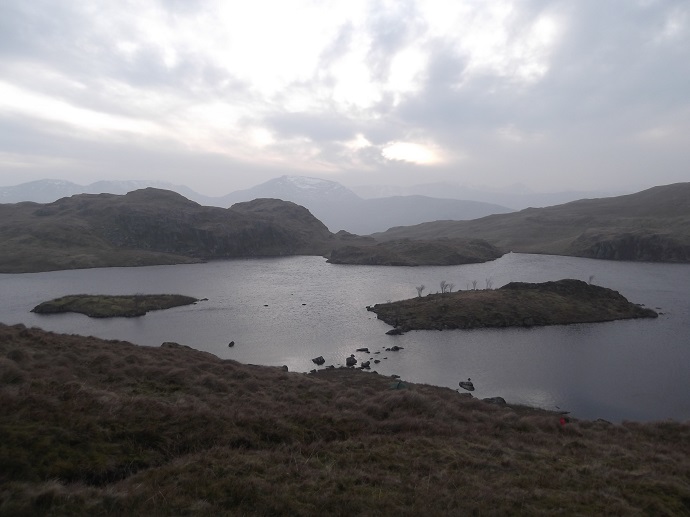 From there it was just the familiar - if slippery - Boredale Hause path, although the wind was up enough that going round the top of Dubhow Beck wasn't very nice at all - I just kept leaning away from it.

I was even still keeping reasonably well to time, and made it down to the road with the last of the light, to go and find my bed and some dinner - pleased with myself for actually having done what I set out to do, for what seemed like the first time in a while.


TheNab.gpx Open full screen  NB: Walkhighlands is not responsible for the accuracy of gpx files in users posts