Dry feet on Beinn Mhanach – and Gaelic lesson thrown in

Dry feet on Beinn Mhanach – and Gaelic lesson thrown in


It’s an awfully long walk up the glen for a single Munro.

And then there are all those fords. Reports abound of chilling, knee-deep wades that don’t really make it a particularly alluring prospect. After all, who wants to begin the day with soggy feet before the climbing even starts?

But Beinn Mhanach lurked. There it was, at the far end of the glen, and still on my list each time I hurtled along the A82 in one direction or another. Not on a “bucket list”, it hardly warrants that, just one of those singles that always get left for another day. 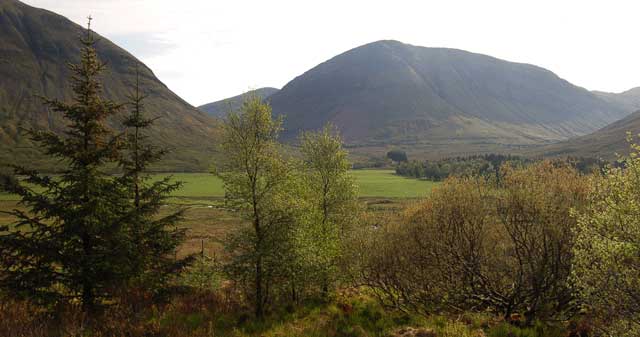 Beinn a Chaisteil from Auch

One of those days approached, but how could the day be improved? Then I found Graeme’s report of a couple of years ago: take a high level route to avoid the fords and catch a couple of Corbetts in passing. So, Beinn a Chaisteil and Beinn nam Fuaran would be the warm-up act.

At half past eight I was the only car parked close by the track down to Auch, ready to tackle the first strength challenge of the day. It’s a long straight stretch of road so those timber lorries and coaches get up some speed as they flash past, hurtling up the road from Bridge of Orchy. There’s no proper lay-by, and I wanted to lose neither my car door nor anything else lying in the back of the car as a succession of slipstreams tried to claim anything not nailed down. Not a place to linger, so I was away within ten minutes.

Beinn Dorain was beginning to bask in the sun, and beyond the cluster of cottages at Auch, the bulk of Beinn a Chaisteil waited. Once at the viaduct it was a case of turning up the track to the right and into Glen Coralan rather than continuing straight on up the glen towards Beinn Mhanach and all those river crossings. 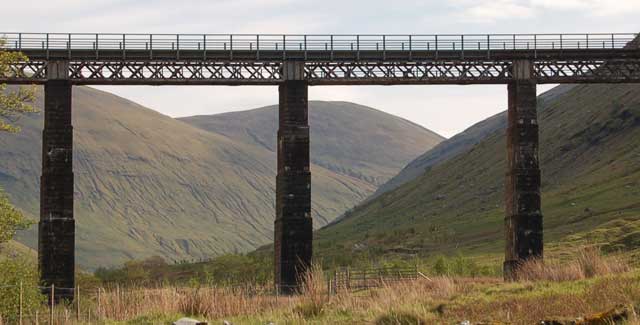 Beinn Mhanach through the railway viaduct

Looking back to the viaduct

At this stage I flirted with a brutal option.

The track snaked its way up the glen, gradually gaining height. The point where a rising traverse across the hillside avoiding Creagan Liatha and reaching the tail of Beinn a Chaisteil’s south east ridge seemed miles away. Surely, I could pick out a line on the eastern side of the Allt Choire Ghaothalch directly up into the corrie above and, in one strength-sapping burst, miss out a huge zig-zag. Get it over with.

Then sense prevailed. Preserving energy for later in the day was more important. Pace yourself, you’re not getting any younger. 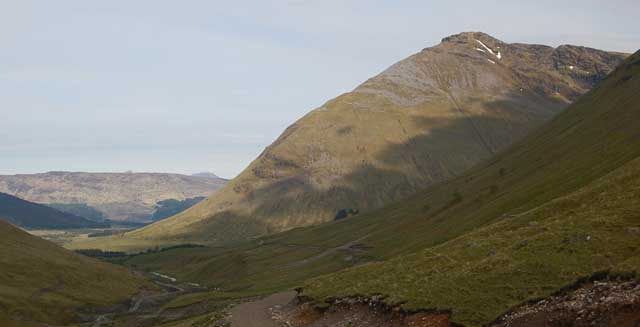 Back down Glen Coralan - before starting up to the ridge

So, at the end of the track, faced by the fluted flanks of Beinn Caorach, I headed up to the left and soon reached the fence line leading the way to the top. On Beinn a Chaisteil I was greeted by a flat grassy top with a few jumbled stones masquerading as a cairn. It was reminiscent of a Lakeland fell rather than a hill in the West Highlands that is just 28m short of being a Munro, and definitely nothing like the castle its Gaelic name suggests.

With the day’s route now visible ahead, I followed the fence line that heads off in the direction of the saddle that had to be negotiated before arriving at the second Corbett, Beinn nam Fuaran. Having successfully avoided getting wet feet down below, the hill nearly had the last laugh. Painstakingly picking my way through the bogs took ages. It was one of those places that if the mist came down you’d be able to hear the Hound of the Baskervilles, and be in danger of sinking without trace, a solitary walking pole floating on the gloopy surface the only legacy of your passing. Anyway, melodramatic imaginings apart, it heralded a steep pathless clamber to the top of Beinn nam Fuaran. Having followed the fence down onto the saddle, a track might have existed somewhere, but by the time I’d found dry (or dryish) ground it had long since gone.

Again, I arrived at a fell-like top. Loch Lyon stretched away below and while the surrounding hills gave a sense of the scale of the place, they unfortunately blocked the view to most of the bigger tops beyond. Nevertheless, it was still a great place to stop and ponder the next stage of the route, and discover the minor observation that I’d failed to make on the map at the beginning of the day.

Two Corbetts and then a Munro: I’d got it set in my mind. And for some naive reason I got it into my mind that the final Munro of Beinn Mhanach would be the icing on the cake. No. I had to make another cake all over again. What I hadn’t taken into account was how far down I had to go before starting the long, unrelenting slope to the top: another 600m. It was a salutary lesson in remembering that many Corbetts can as tough as Munros, if not more so sometimes. 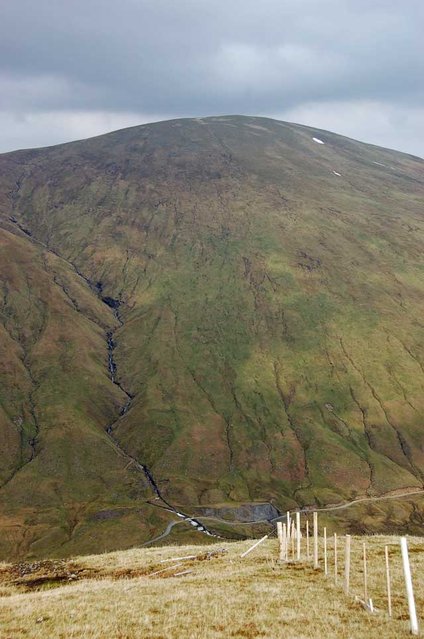 But the rest of the day stretched long into the evening, so there was plenty of time.

One guidebook claims that there is no clear path from the water outlet up to the bealach between Beinn a Chuirn and Beinn Mhanach, and from a distance it looks to be the case. However, on starting to climb the true right bank of the Allt a Chuirn, it soon becomes clear that a worn path is starting emerge.

There’s no escaping the fact that this is a long slog. By now I was grateful that I hadn’t taken the option of the steep start to the day when first tackling Beinn a Chaisteil. It was simply upwards, ever upwards for a good hour or more. Once the angle eased off I looked forward to the cairn bursting the horizon at any moment. And I continued looking forward, and forward, and forward. It just never seemed to appear. Finally, persistence paid off. Two hours after leaving Beinn nam Fuaran and five and a half hours after leaving the car back on the A82, Beinn Mhanach was ticked off my list, and I joined Glaswegian Billy by the cairn. Sadly, the day had become quite hazy and the prospect of any decent views was disappearing. 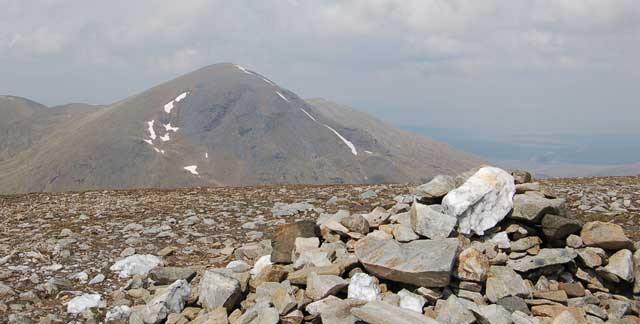 Beinn Mhanach - Beinn a Chreachain behind

But company and conversation is the best antidote to tiredness. We compared and shared experience in the easy way that mountain strangers often do as we strolled together across to Beinn a Chuirn to the west. 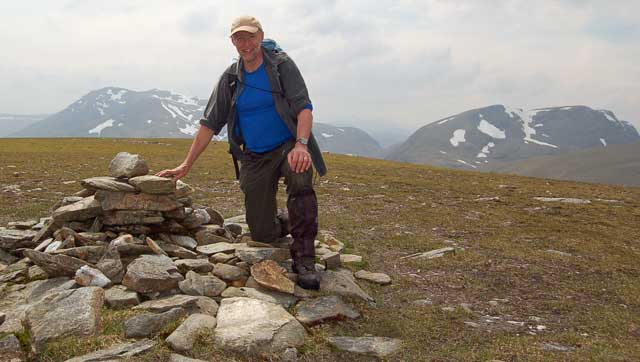 In descent we went our separate ways from the bealach. Billy headed south on the direct route back to the glen. I headed north, following the fence on a descending spiral to reach the Allt an Loin and the more circuitous route back to all those river crossings. Wet feet at the end of the day wouldn’t be so bad. 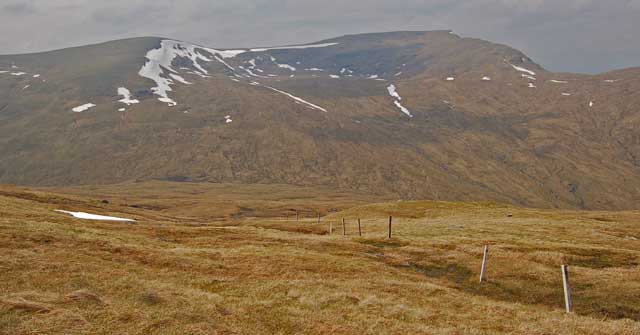 The spiral descent round the back of Beinn a Chuirn

The next conversation, with another two strangers, took place down at the cluster of sheds at Ais an t Sithean. I received lessons in Gaelic pronunciation, we mused on the language of place names, the writings of Seton Gordon, swapped the names of authors to pursue, and then I recalled a similar conversation I’d had in the Cairngorms last year.

“I expect that was Adam Watson,” said one. ”Doctor Adam Watson,” the other emphasised. The fact was confirmed when I described the stature and thick, bushy white beard of the person who had corrected my pronunciation of Beinn Mheadhoin and commented on the extent of summer-lying snow patches below Ben Macdui. What a character; Mr Cairngorms. Google him and be impressed.

All that remained was the river crossings and the long walk out. As the track and the Allt Kinglass zig-zagged across one another they proved to be largely benign, getting deeper further downstream as the river grew but never threatening the insides of my boots.

It was with relief that the final slope up to the A82 was tackled and a good day ended, with the prospect of tea and carrot cake at the Green Wellie the next attraction.

At times I was beginning to regret not realising the extent of “up, down and up again.” With hindsight though, it was a good decision once I saved some energy for later in the day. It’s clearly a route to be done in fairly dry conditions, but the high level option definitely adds to the outing.

Re: Dry feet on Beinn Mhanach – and Gaelic lesson thrown in

That was great and thanks for emphasising the drop and then gain in height. It's easy to look at the map and think it doesn't look too bad. Glad you kept your feet dry!

Re: Dry feet on Beinn Mhanach – and Gaelic lesson thrown in

Cracking stuff Nigel. I know how you felt at the end of this one! I got a call from my wife on the walk out that she had forgotten her house keys so she and Ailsa headed to Pizza Hut in Perth to wait for me. I can still feel the sense of weary satisfaction that I felt as I enjoyed a pizza and cold beer.