Having said that there were a couple of breaks in the cloud when we were given a brief glimpse of what we were missing. When I say brief I mean brief, this involved me taking off my rucksack & then retrieving my camera from within & then focussing the camera to get a quick photo. Invariably I was too slow, so I will be rehearsing this process for future similar situations

Prime example, we were heading down off Sgurr an Fhuarail & the South Ridge appeared, looked stunning but I was too slow & missed the photo opportunity

The day for me started with the alarm on my phone set for 5.30am, however as usual I was awake before it went off & was on the road before 5.45am, a quick stop off at Asda in Dunfermline to fill up with petrol & I was on my way to Perth to pick up my co-pilot Martin in Perth.
We arrived at the car park at the Cluanie Inn just after 9am & met up with Emmanuelle, we then but all the gear in my car & headed off to the start point 7km along the road, parked in a fair sized car park. We had a brief chat with a group of 3 guys who were heading upwards to do the Sisters. Unloading & getting prepared for the long slog uphill, don't you just love the background? 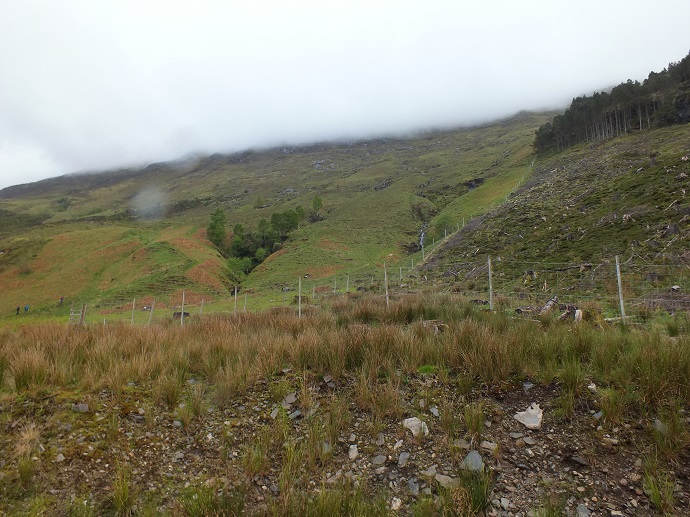 The way ahead & up into the cloud

The plan was to follow the WH guide to the letter, however as usual the plan did go slightly wrong

We set off donned in waterproofs & there is no chance to get the legs warmed up, as soon as you leave the car park it is upwards & upwards & upwards. It wasn't long before layers were being removed as the tough uphill going was making one overheat a wee bit 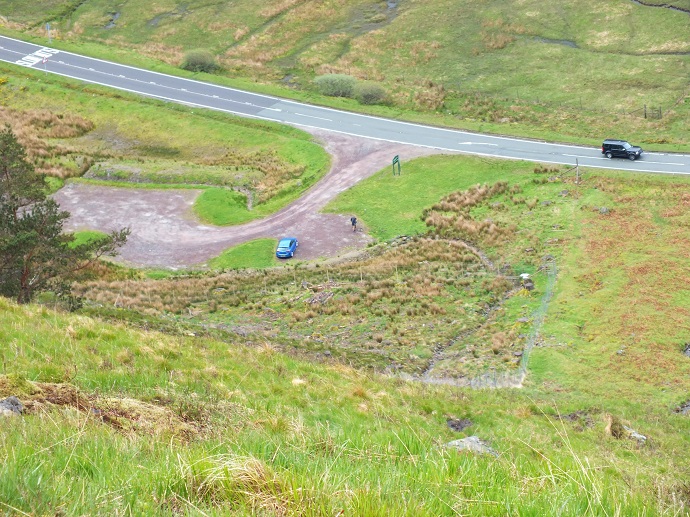 A photo opportunity before we entered the cloud, looking back down to the car park area 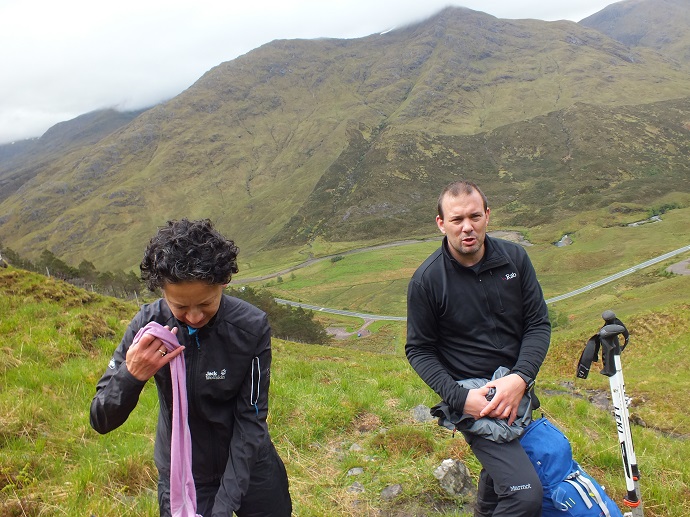 Layers being removed whilst Martin gasps for breath 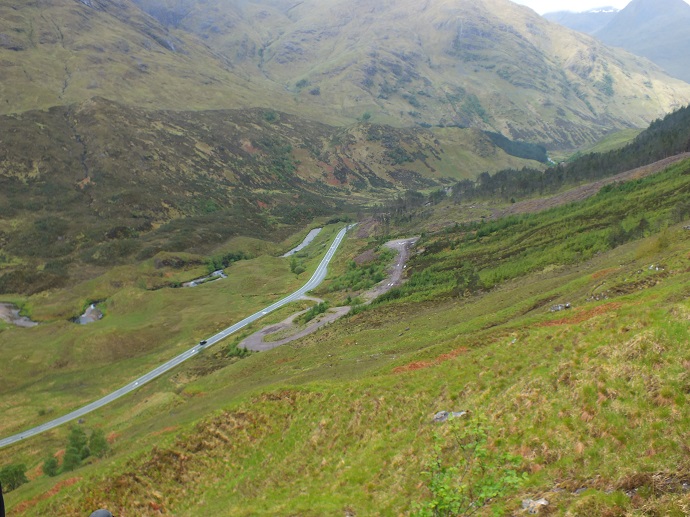 One last look down before trudging uphill again 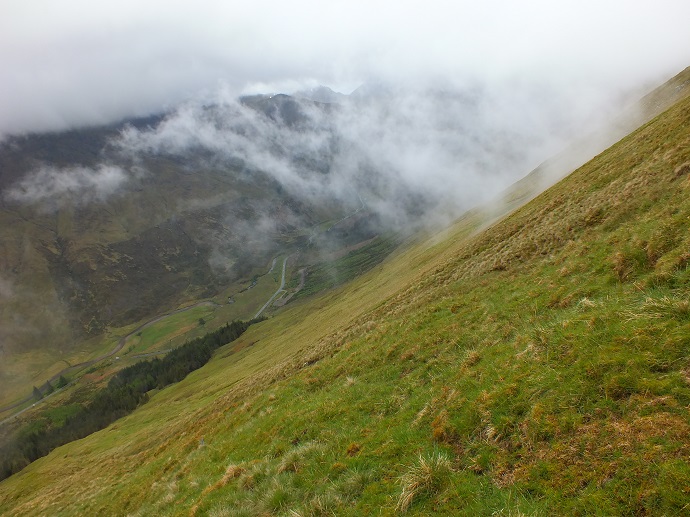 This shot gives you an idea as to the gradient, which is relentless

Initially there is quite a well defined, albeit 'damp' path, we followed this & headed east above the small forested area, that is where we lost the path, if one existed

So we got out the route description & decided to head upwards (not really any other option available) but slightly east, with the intention of picking up a path if there is one.
So upwards & onwards, stopping occasionally to get one's breath back, we couldn't even use the excuse of stopping to take a photo

More upwards & onwards, we were hoping to reach Bealach an Lapain, but when we eventually reached the top there was a great path, the decision was which way to head - in other words where exactly are we

After a brief discussion we decided to head west just in case, you have to bear in mind we were in cloud & could see about 30ft or whatever that is in new money. After about 100 yds we reached a pathetic little cairn & from previous photo's we knew this was Saileag, so we knew we were back on course 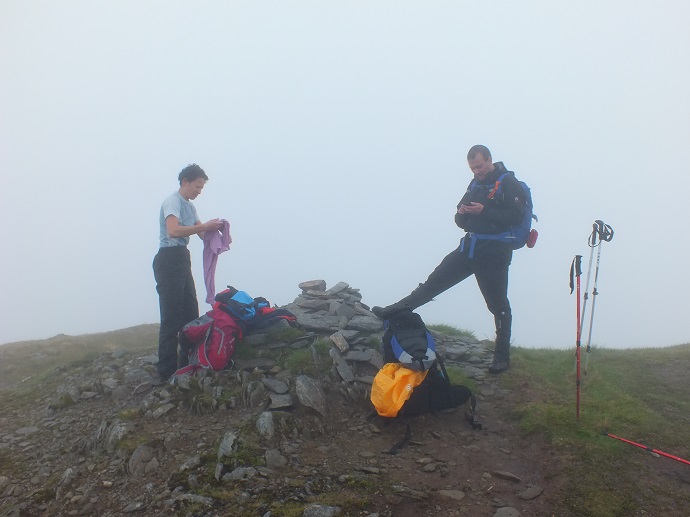 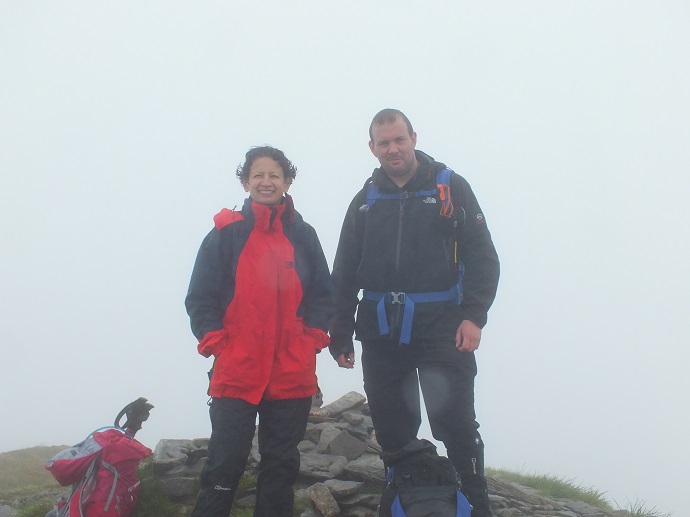 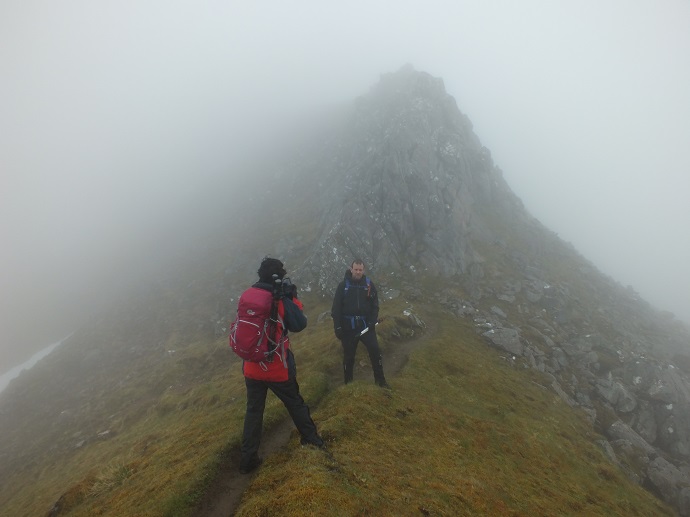 Nice looking background on the way to SaBD 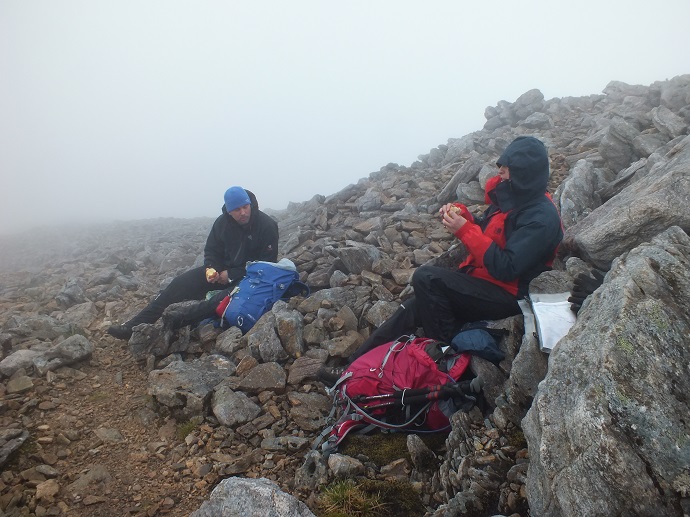 Lunch in a sheltered spot, you would think it was mid-winter

Our next problem was trying to locate the summit of SaBD, we came across the first cairn but knew from the route description that this was not the real summit as there was no drystane dyke, so we followed a path & soon enough the drystane dyke appeared & it does look rather odd, next task was to reach the 'substantial' cairn, which we did after a bit of scrambling. Unfortunately, not sure why but I didn't take a photo of that cairn, which was very impressive & must have taken some building

It was whilst scrambling round the cairn we were joined by another group of 5 walkers, who informed us they were all ex Newcastle University students, they advised us they had followed us uphill.
From the summit of SaBD we retraced our steps for about 50yds & then turned left & started descending eventually reaching the final summit of Aonach Meadhoin. 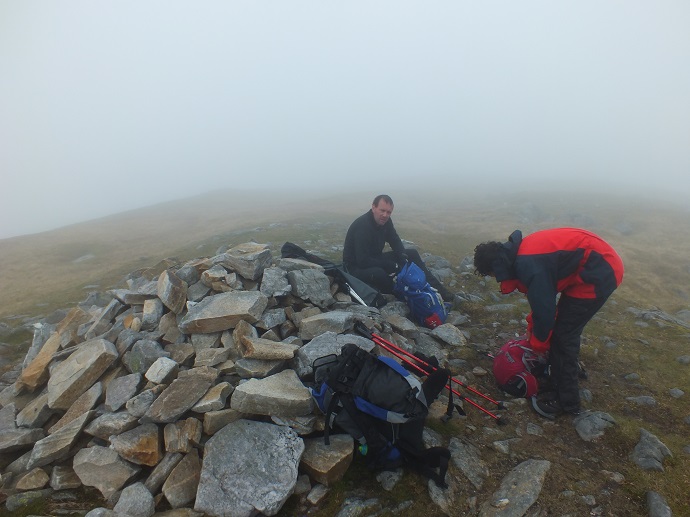 So now it was down with the Cluanie Inn beckoning, however there is a wee bump to ascend before you finally go down & down & down.
The final bump is Sgurr an Fhuarail, which looked uninviting & unavoidable so it was upwards again 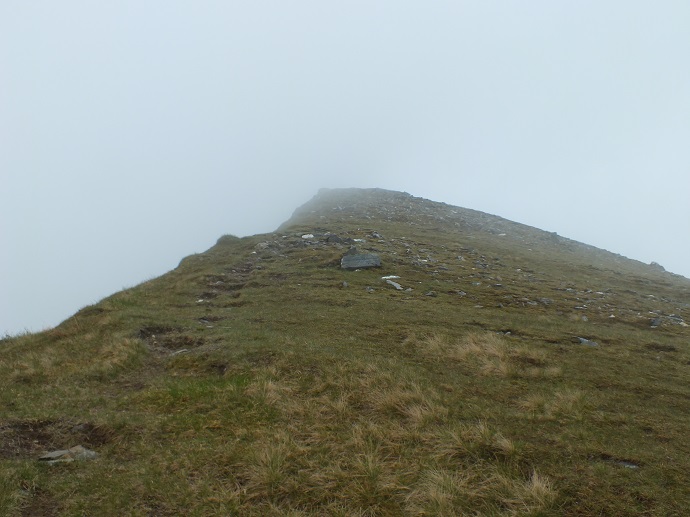 The way up to Sgurr an Fhuarail

The climb upwards didn't seem to take any time at all, maybe it was the thought that we would be heading down soon.
On top of SaF a large cairn was spotted to the west, however we decided to head straight down, no path but nice grassy slopes and once below the cloud we got a view 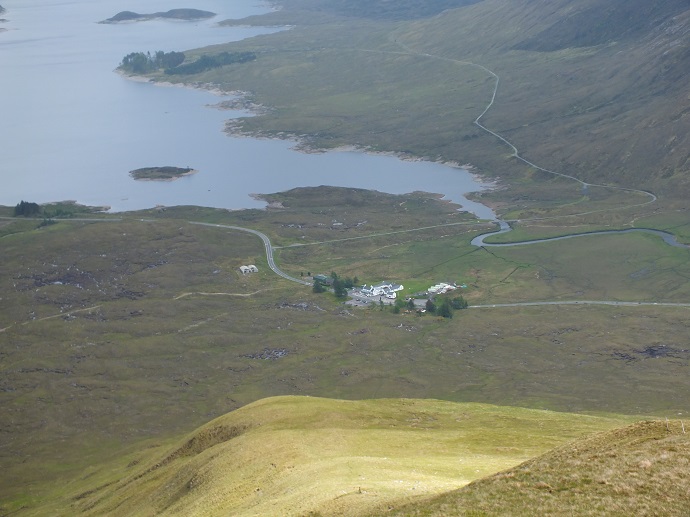 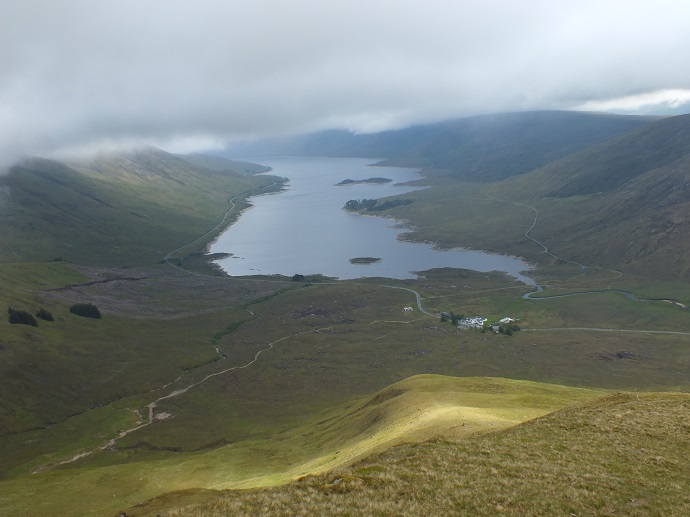 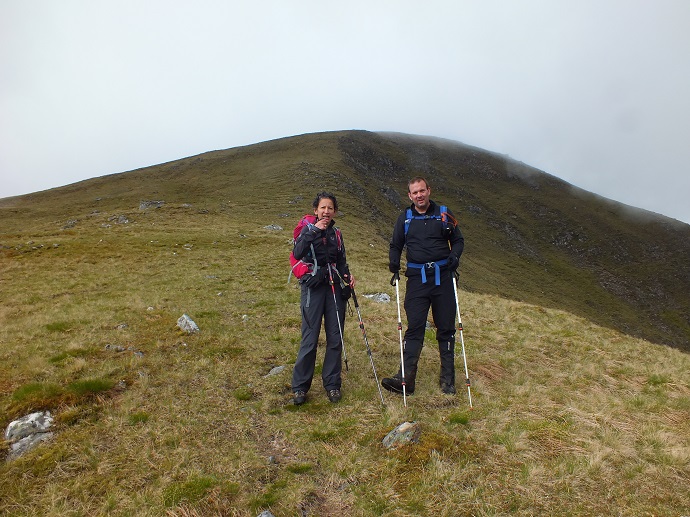 Posing on the descent

The descent wasn't actually too bad, nowhere near as steep as the ascent & certainly not the worst

So almost 7hrs later we were back at Emmanuelle's car, a quick nip along the road to get my car & then into the pub

A great day out, with great company, albeit a long one, the weather could have been better, but it didn't detract from a another fantastic ridge walk. For me that is 2 long walks in Glen Shiel and both have been marred with low cloud & the occasional view that we did get means I will just have to return one day

Glad the weather didn't dampen your enthusiasm. It cleared up on Skye in the afternoon but looks like you had no such luck.

Would you recommend your descent route as the ascent and do the round the other way round? Thanks.

AnnieMacD wrote:Would you recommend your descent route as the ascent and do the round the other way round? Thanks.

No I wouldn't the descent would be far too steep & by the time you reached the bottom you knees, ankles & feet would be screaming

Geezo that Gradient up does look bad and photo's never do it the full justice. Having driven past a few times i often thought oocha beastie!! Can't wait for 'the burn' when i attempt this lot.
Cheers, good read and useful for me.

AnnieMacD wrote:Would you recommend your descent route as the ascent and do the round the other way round? Thanks.

No I wouldn't the descent would be far too steep & by the time you reached the bottom you knees, ankles & feet would be screaming

Knees, ankles and feet were screaming

And I didn't cheat and have two cars, so after the punishment of the descent I had a nice road trip to finish off the day. Knees, ankles and feet were too knackered for screaming by that point

A good round these three though, whichever way round you do it

Shame you didn't get the views, this is a spectacular ridge

The short scramble on SaBD to the true summit cairn is pretty airy, if you can see what's below

I hate walking along busy roads and when I did Brothers and Sisters, each time I doubled back along the ridge. Not a good idea in wet weather, though - I imagine the steep slopes of the bealach would be very slippery after rain.

What a contrast to Saturday!
Weather and gradient!! LOL.

Great view down on the loch though.
Chris

Totally agree, forecast was good all week, then the day before it changed

In all honesty, that was a darn sight easier than dragging a 3 year old up & down Schiehallion (nearly to the summit)