Dog tired after the circuit of Lochan nan Cat

Dog tired after the circuit of Lochan nan Cat


Debbie and I were staying in Kinloch Rannoch for a long weekend (courtesy of cashing in some Tesco clubcard vouchers). Despite the somewhat misleading title of this report, it was just the two of us, the dog having been dispatched to my parents for her very own long weekend break. We decided to go up via Lawers village and kick the weekend off with a circuit of Lochan nan Cat, taking in the three easternmost Munros in the Lawers range.

We were the first car of the day into the lower car park at the hotel and by 9.15 we were off along the A827 the short distance to the horn carver’s place and the track up past the farm and onto the hill path through the trees to the east of the Lawers burn. Meall Greigh from above the farm

The next person to head up this path should maybe consider carrying a pair of sharp secateurs and spending a bit of time doing some pruning! The path just beyond the farm was littered with the sharp and jaggy fallout from too many bushes being too weighed down with snow over the past few months, clearly resulting in them collapsing over the narrow path. It was a rather tortuous start to the day but we were soon through the worst and then over the second stile and onto the open moorland with a clear sight of the route over Sron Mhor and up onto Meall Greigh. The views soon opened up across the trench carved by the Lawers burn towards the central peaks clustered around the head of Lochan nan Cat, as well as south across Loch Tay and to the hills beyond. An Stuc and Meall Garbh across the Lawers burn Things soon started to close in around us and the peaks to our left were soon smothered in a thick swirling mist. As we skirted around the crags of Sron Mhor however, the cloud lifted away again, before again closing in as we ascended the southern approach to Meall Greigh. By the time we reached the scattered summit cairn however, it had mercifully lifted again to reveal fine views eastwards down Loch Tay and north over the Carn Mairg group. We have a break here for some chocolate raisins and hot juice before heading due west down into the broad bealach of Lairig Innein and climbing alongside the broken down boundary fence towards Meall Garbh. It is at this point that we begin to encounter a trickle of walkers coming towards us, obviously having made a good early start from the visitors centre on the other side of Beinn Ghlas. Leaving Meall Greigh, An Stuc and Meall Garbh ahead Meall Greigh from the ascent of Meall Garbh We have a quick breather at the cairned summit of the first little summit ridge before heading the short distance across the dip to the true Munro summit, probably the pick of the day’s viewpoints, with brilliant views along the rest of the winding ridge as well as west to the Loch Lyon hills. 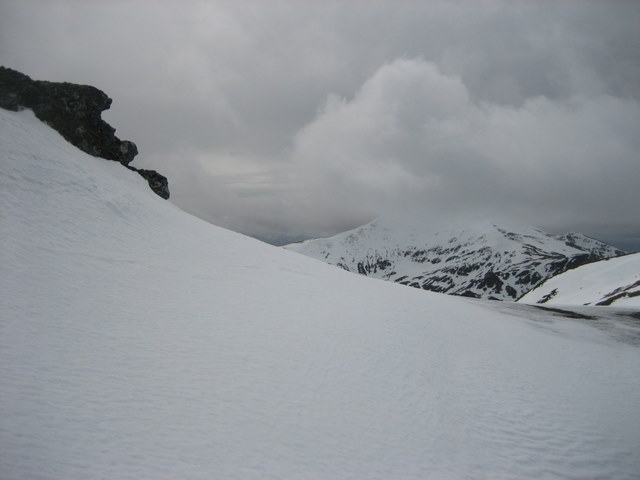 Cloud topped Ben Lawers from near summit of Meall Garbh Along the ridge from the summit - Ben Lawers, Beinn Ghlas, An Stuc and Meall Corranaich

Ben Lawers itself looms large from here, as does An Stuc, our third and final summit objective of the day. We pick our way down to the bealach at the foot of the steep northeast face of An Stuc and stop for lunch in the shelter of a few large boulders while we watch the figure we had been able to pick out at the summit picking his way gingerly down the steep face. At one point he started a little rock slide with one particularly large fragment going crashing and bouncing off down towards the lochan. Debbie descending towards An Stuc Meall a Choire Leith, with Stuchd an Lochan and Meall Buidhe behind in distance We can see you up there!

We exchange a few greetings as he passes before it is our turn to tackle it in the other direction. Debbie leads the way and manages to successfully negotiate the loose patches of light scree, rocky ledges and outcrops, wet grass and scattered patches of mushy, fast melting snow and ice. Meall Garbh from the steep northeast face of An Stuc We are soon at the summit, with Ben Lawers now looking very tempting beyond. I could have been very easily persuaded, but I can tell that Debbie is now starting to really feel the effects of this, her first major mountain outing since September. We also don’t want to be too late to the hotel at Kinloch Rannoch – better to get up there nice and early and have plenty time to relax over a few drinks before dinner rather than being rushed. Ben Lawers and Beinn Ghlas will not be going anywhere in a hurry – they’ll keep! At the summit of An Stuc

From the summit of An Stuc we pick our way down the steep little gully towards the head of Locan nan Cat and along the boggy southern shore which is teeming with amphibian life forms, some of them even indulging in a spot of hanky panky as we walked past! Descent towards the lochan An Stuc across Lochan nan Cat An Stuc and Lawers burn

It was quite a relief (for Debbie especially, who was now looking like the idea of a 7 hour hill walk had gone way beyond the point of actually being appealing) to reach the little dam and get onto the track and then the path which tracks down into the ravine of the Lawers burn and over the little footbridge to rejoin the path down towards the farm and the main road.

All that then remained was to repay the owners of the Lawers Hotel for the kind use of their parking area by buying a couple of pints of cold lager and two packets of crisps before heading for Kinloch Rannoch.

Nice report Graeme. Seems frisky frogs are everywhere. There were hundreds of them in and around the small loch near the start of the walk up Beinn a'Ghlo on Saturday. An older gent I walked with for the last half mile found several 'in the act' on the road and actually picked them up and carried them back to the water. I sorta thought, maybe they left the pond because they wanted a bit of privacy

Nice report Graeme, how was the ascent up to An Stuc? Looks like all the snow has gone now?

Definitely - I did this route in May last year and very nearly gave up as I couldn't find a way up An Stuc. Eventually managed after several false starts. Had similar conditions as yourself but was lucky in that after An Stuc the clag cleared from Ben Lawers so did that as well. Then got a brief blizzard coming off - oh what a joy it was to see the snow flying up out off Lochan nan Cat and into my face

That climb up An Stuc doesn't look as bad as I thought (we couldn't see a thing as usual when we were there) - wouldn't like to come down it though...