It had become a source of embarrassment to me that despite being within 60miles of where I live in Preston I had never actually visited the Peak District.

I was determined to change this and looked at the two principal summits of the area - Bleaklow Head and Kinder Scout - and ways of which I could climb them in one day. However, Kinder Scout looked far too interesting for that and I felt it deserved a more detailed walk at some point meaning that Bleaklow was to be left on it's own for a half day walk at some time.

Bank Holiday Monday proved to be that time with a free morning giving me time to do the walk as an out and back along the Pennine Way from Torside.

I started off at the busy car park besides the Reservoir and followed a path round to join the busy (walkers, dogs, cyclists, runners) Trans Pennine Trail. I soon came to a turn off for the much quieter Pennine Way and made my way initially quite steeply up towards the hill above.

Most the hard work is over very early on and soon enough I was on the pleasant track along the edge of Torside Clough. As this gets higher you meet the familiar Pennine Way Slabs and you lose a little bit of height as you cross the stream itself. Turn left on to the Pennine Way Height is gained quite quickly 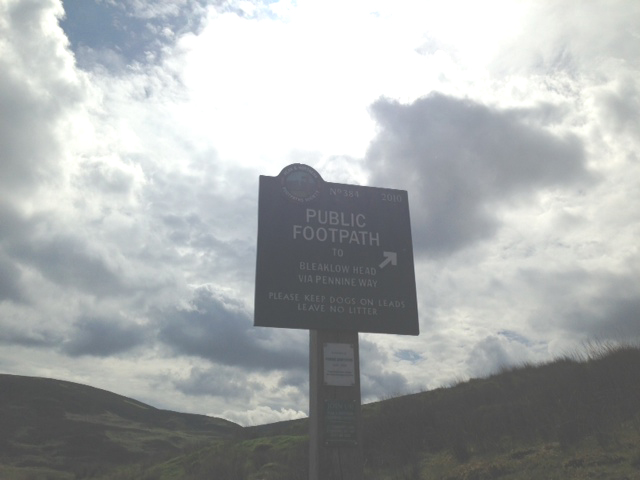 It's hard to go wrong if you stick to the path! Path along the edge of the Clough Looking back at the stream crossing

You are thankful for the good path the Pennine Way provides as you hit the wild moor top as there are a serious lack of landmarks until you hit the main summit cairn and it's pole.

There is some doubt as to what the exact highest point is with a nearby peat growth sporting a tiny cairn and appearing to over top the main cairn (although I'm pretty sure most people wouldn't even care!).

I then wandered over towards the kissing Wainstones (with yet another cairn) and the views out towards Greater Manchester are very good from here although nearby Kinder Scout appears too bulky to appreciate properly from this distance. On the open moor - not a place to leave the path! Yet another cairn near the Wainstones Wainstones with Greater Manchester in the distance There seemed to be very little reason to return by any route other than the clear path so I decided to follow that route quickly and easily back to the car with superb and pleasing views in front of me all the way down. View from the edge An interesting first visit to the area for me, far better than I expected, and leaving me quite looking forward to a future visit to Kinder Scout.

It's a good job you went to that small cairn because that is the true summit cairn, I missed it first time I went up.

Haha - yeah obviously glad I did but would have to say that I wouldn't be losing any sleep about it if I hadn't!