I had this weekend pencilled in for a trip, hopefully with a stay somewhere to save on the fuel bill and driving time. While at work on Friday calls were made to Angus the Boatman and a B&B in Whitebridge to confirm bookings which left me excited on Friday for the adventure ahead.

Woke up at 4am but did not get up till 5am luckily i had packed the car the previous night so all i had to do was fuel the Springers and get them into the car before the quick drive into Aberdeen to pick up my mate Andy and then it was go go go as Murray Walker would say. Left Aberdeen at 6am and was up at Loch Mullardoch dam for just before 9am to get the Boat to the other side, courtesy of Angus the Boatman. His details can be found on the MCofS website and he's happy to pick people up in his car or drop off if you have plans on any of the surrounding Munros. Where Angus the boatman picks you up 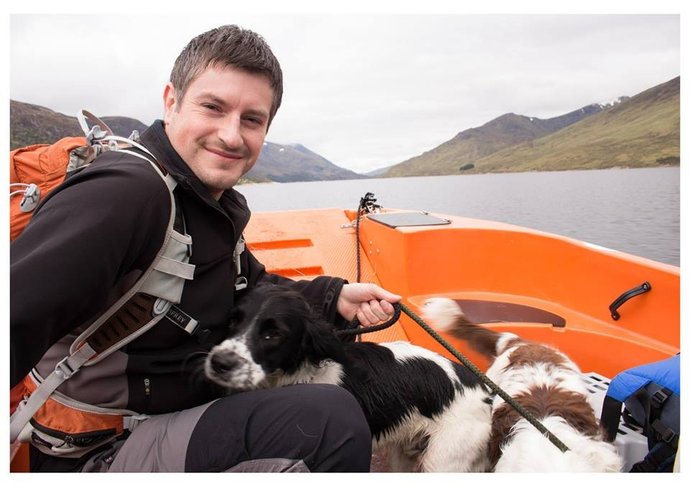 Me and the dogs on the boat

We had a calm day heading up the loch but Angus said the waves can be quite bad if a Westerly is blowing, life jackets are available. Sharing the boat was a guy from Glasgow, nice lad but never got his name. Within 10 odd minutes we were at the drop off point at the East Benula Forest. Gave the man his dues and was ready for the day ahead. Looking back to Loch where we were dropped off Looking forward to from where we were dropped off West to the shoulder

We followed the soggy path running beside the Allt Coire a'Mhaim Westwards which heads up into the peat hags and the Shoulder of An Socach. Gosh I’ve seen enough peat hags to last me a lifetime and I’ve still 182 Munros to do!! This was quite tiring but we had great views behind us over to Beinn Fhionnlaidh and Carn Eige. While still on the shoulder with a lovely silence, we heard what we think was a Young Golden Eagle calling, however we could not actually see it and we didn't like to let the dogs in on the fact there was something out there so carried on. 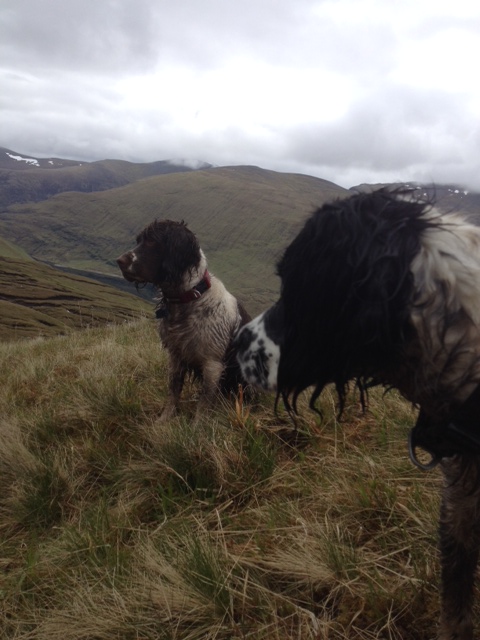 Dogs have spotted somehting while on the shouder, Beinn Fhionnlaidh in the background Turning uphill North wards we started to see the Summit the other side of the curving ridge. We made it to the first summit in T-Shirts due to the effort in gaining the height, my fleece would be off/on all day. We spent about 15 minutes on the summit taking pics and enjoying it before we moved off along the ridge Eastwards. 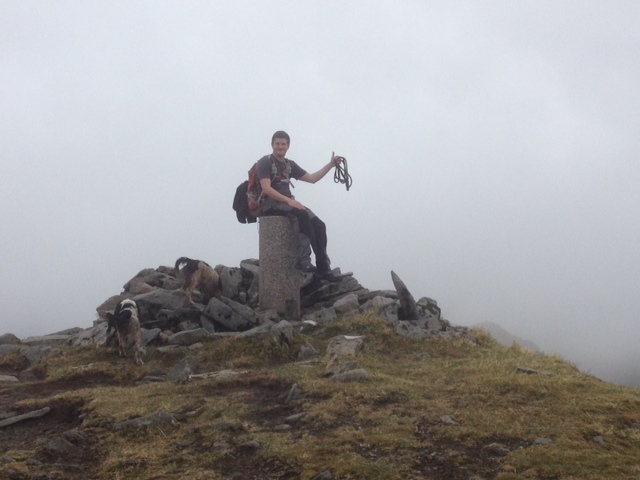 Me sitting on summit trig The path is easily followed and we could see our targets ahead. The dogs were in their element darting ahead after all the new smells then re-appearing to check we were still following their lead. We made short work of the walk up until the pull up onto the flattish top of the route up to An Riabhachan. 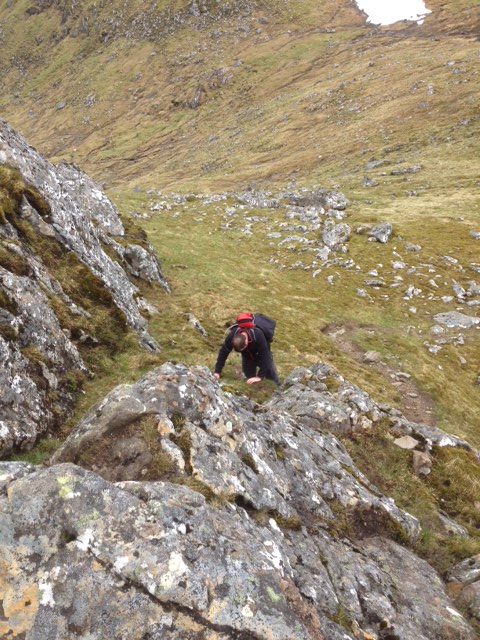 Andy and his rich tea heed scrambling up I sat and waited for Andy with the dogs at the initial cairn after the climb. Andy appeared looking a bit worse for wear, he had been playing 5-aside footy the night before so I don't think that helped. More water into him and we carried on to the summit. Stopped for some carbs and the views back and forward were great. We could see exactly where we were heading to and where we came from. Path over towards Sgurr na Lapaich

This next section is fun and like a mini ridge walk as it weaves and undulates towards Sgurr na Lapaich. We passed a guy and then an nice couple whom were walking the whole route, fair play to them, the guys obviously had to plans to see any of the Champions league final later that night

While on the final decent down before the climb up to the highest Munro of the day we caught up with a right decent pair of guys, shout out to Douglas and Kevin from Perth. They hope to complete their round next year and i hope they do. I hope i have the relationship with my mates that they have on the hill, they bounced off each other and pulled each other along and were happy to help and advise us on other walks we had not done. Andy was suffering from bad cramp and before we knew it peanuts were being offered and also plenty juice. Just brilliant. We completed the rest of the walk with them. On the summit of Sgurr na Lapaich were around 11 guys from a Mountaineering Club in Aberdeen, we never got a chance to tell them we were also Aberdonian but if you talk to every person in detail you'd never get off the hill Roy on Summit Sgurr na Lapaich with Aberdeen guys behind

After more snacks and checking Andy was fine for heading off to the last Munro we set off. The drop off Sgurr na Lapaich is steep and quite rocky, luckily we managed to slide on our booms down some small snow fields and the dogs were loving rolling about in it. Andy sliding down wee snow field with Roy looking on It was an easier walk up to the last Munro and it was with a sense of achievement and also sadness that an epic day was soon about to end that i placed my 4 wee stones on the cairn, one for me, one for Laura, one for Roy and one for Lochy. We walked over the Southern of the two summits which the book says is lower just in case and it was off down the hill towards the dam which was now in our sights. 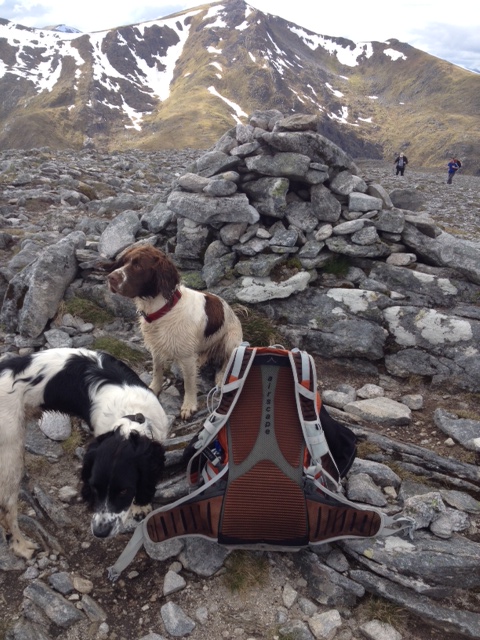 As the sun was starting to lower we heard the lovely sound of a Cuckoo coming from the Allt Mullardoch burn to our left. All we had left was to stumble through the newly sprouting bracken shoots and heather on Mullach na Maoille before making it to the path at the side of the loch. Andy started to slow here and i told Douglas and Kevin to keep going, a shame we never managed to catch up as we'd have liked to say goodbye to them and thanks for their help. Never know may see them on the Mountains again one day and hear more of their well told stories and experiences. All that was left was for Andy to push on back to the car while i sent the dogs into the loch for a clean and then fed them and we were on the head of the road to Fort Augustus for Fish and Chips (Fesh, the stuff that sweeems in the sea) We made it back to the B&B for the second half of the Champions league Final which rounded off a great day.

Nice report with some great photo's, the dogs look like they love the great outdoors, especially on the snow

Fife Flyer wrote:Nice report with some great photo's, the dogs look like they love the great outdoors, especially on the snow

Yeah they love the snow, but not as much as they love mud

Great report and pics - I've been wondering about the boatman and dogs - glad to see they're welcome. We might follow your lead later this year

Have likewise been wondering about the boat. What does it cost?

Huff_n_Puff wrote:Great report and pics - I've been wondering about the boatman and dogs - glad to see they're welcome. We might follow your lead later this year

The dogs will love it. Strange my plans revolve around them these days

dogplodder wrote:Have likewise been wondering about the boat. What does it cost?

I was £25 and he needs at least three people to sail. Dogs are free, not sure how negotiable it is but I suppose it costs a lot to run that thing. I didn't mind paying and actually enjoyed it, mind you it be miserable if the waters were rough, for humans and dogs!!