Bla Bheinn - 3 days in the waiting

Bla Bheinn - 3 days in the waiting


3 days booked with a guide, horrendous weather, wind, rain, sleet at the tops and a gammy knee - all put paid to what should have been a Munro busting, productive 3 days in the Cuillin with Tomsie and Quoman. When the last guided day was cancelled yet again, we decided to head for Bla Bheinn and just take what mother nature threw at us. (too long in the green box that was our tent, happy to just be out

Knee strapped up, TENS unit been on overtime and salonpas medicated patches used up,(other medicated heat patches are available!) I accepted that the 'down stretches' would hurt the old ITBS but heck, we had to get SOMETHING out of the Skye section of our trip.

Having already driven from Slig to Glen Brittle, we now trooped off back to Slig then on down towards Elgol on the Strathaird peninsula. (great walk on the beach at Elgol yesterday, watching The Cuillin appear and disappear under much clagginess)

We arrived at the the very busy car park on Loch Slapin, a couple of groups already heading along the road towards the start, with more booting up and heading off at the same time as us. The heavy wind and rain we had encountered in Glen Brittle had cleared and the views were opening around us but the hill remained under cloud. This was the most promising day we'd had on Skye since arriving on Tuesday.

There are some paths from the car park that lead down to the road on this side of the bridge before crossing and exiting to the clear path on the North of the Allt na Dunaiche, alternatively, go back down the drive in and take a left, all leads to the same place. Wullie and the hordes on the path beyond

We were one of about 4-5 small groups heading up the path, stopping, overtaking etc . jackets began to be peeled off as the clouds cleared and a bit of heat came through. This is a smashing path, through low undergrowth, rising gently beside na Dunaiche with fabulous waterfalls, crystal clear pools with amazing coloured rocks, grey/green, rusty brown etc. Deep gullies dropped down to our left headed by waterfalls and edged with young trees. Clear waters in the gully below Bla Bheinn The path remains good as it gets a bit steeper, up over some big steps before crossing the burn, fine today but the heavy rain earlier in the week would probably have meant problems if it hadn't all but stopped the night before. Shortly after crossing the burn, the gully of Coire Uaigneich opens up to the South West. We could see a larger group already at this point, having a breather. On reaching them, it was a group of young guys and gals with huge packs

sleeping rolls etc. A quick chat and found out they were on a 9 day trek, walking over Bla Bheinn and setting up camp, before continuing on in some way to The Cuillin ridge, some other overnight camps and then on to Talisker (cant think why?

) Seriously hard work carrying all that kit over this terrain never mind the high rocky stuff.

The path up Uaigneich got wider and rockier but was easily negotiated, the crags of Clach Glas then the lower crags of Bla Bheinn itself above on the right, An Stac to the left, showing a craggy, grassy face. Reaching Fionna Choire, the views over the lochan to the South and out to sea were coming and going, while behind, the views to Loch Slapin were clear but with low cloud around the area beyond. Colourful crew on a breather An Stac and the lochan, looking South

A short rest here, something to eat and a short discussion. We saw 2 parties on different routes above. We opted to go back down the path a few mtrs, back across the small tributary and immediately up to the left. This went straight up, Wullie took a slightly Westerly route with John and I a bit more East. Rocky clambering, not really scrambling, followed, our poles got in the way a bit and one fairly narrow chimney section was a bit of a knuckle scraper but we got there. One section became a bit more exposed but the only issue was gusty wind and we were pretty soon back in the shelter of the crags above. Disappearing into the mist Cloud moving in on the wind On seeing Wullie a bit off and above, resting up on a rock, we headed diagonally up and over, crossing 1 clear path before hitting the one he was on. Another break there and a height check. An Stac and Slapin to the sea John looking quizzically at something or other unknown lol

We reached a bowl of rock, sheer ahead with more graded climbs on the left. I looked up and saw Wullie spread-eagled across the sheer section, making his way up, with John gaining height over the more rocky sections on the left. I quite fancied the sheer face but John shouted that the bit on the left was easy SOLD! The yellow dot is Wullie!!

Off I went, to the left and scrambled up. On getting to a point where I could stand and check what was ahead, I had lost sight of both John and Wullie, no sound, no coloured rucksacks, no answer when I shouted, and little view of the rocks above as a low cloud swirled in. "HELLO!!!", "IS ANYONE THERE???" , "WHERE ARE YOU???", "IS ANYONE F*&$("G THERE????" My 4th (loudest and most cursing) shout finally got a response as I saw John appear through the mist above. At least I had somewhere to aim for.

Clambering up, I reached John and Wullie, sat down, and slurped on my hydration pack. Wullie gave us another height check, something over 600mtrs I think, so on we slogged up hill. I was happy with my plodding but I know it wasn't fast enough for these two mountain goats so I eventually gave up my pole position, too much pressure lol

We quickly covered just over 100mtrs, then next height check (John and I said later that we thought Wullie said 815, but he must have said 915mtrs) Passing some deep rocky chimneys disappearing down to our right, you don't want to be slipping on the scree there, straight down to Slapin for you if you did! One of the chimneys to oblivion

Then, a lot sooner than we thought (back to the 815mtr height check) there it was, a lovely, and more than welcome cylindrical trig point with a cairn to the left. The two mountain goats very kindly let me go first, this being my first Skye Munro, and I gently hugged said trig point. Thanks guys Windswept and interesting on the summit cairn

A few pics taken in the swirling cloud but no hanging around as it was pretty blustery. Back off we went, down to get some shelter.

Picking our way down caused no issues, some slippy rocks but bums to the ground and slither on down was the way to go.

Reaching the bottom of the crags we had another wee rest up, enjoyed the opening views to Slapin and over to Elgol in the South. We had only a spit of rain on the way up which was probably only moisture coming from the low, misty cloud rather than real rain. Gloves and a layer off at this point, possibly too early as the wind still had a real sting to it on the way down, numb fingers 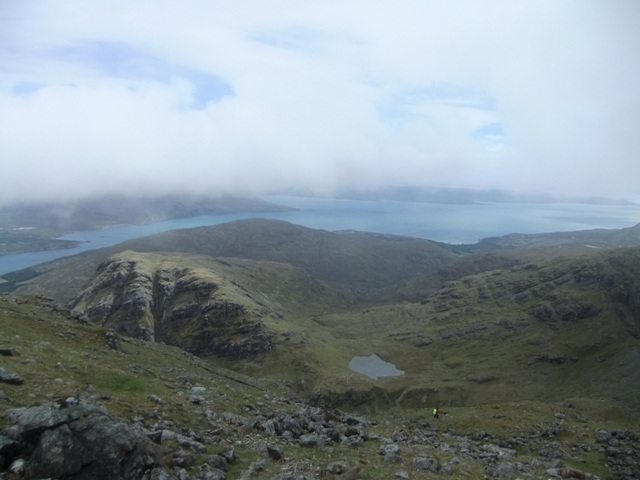 Wullie getting on down!

My gammy knee had indeed started to twinge literally on the first downward turn but it was only slightly niggly at this point, sidestepping down rocks isn't too bad but I was concerned about the turn to the path for a direct walk down, no need to worry, all my work paid off and it didn't get any worse (indeed, felt better at the bottom than it did half way down)

Wullie had a tendon issue on his heel (left I think) and he was unwilling to check but felt it was either very damp or bleeding. He pushed on down to get back asap to the car. Myself and John following a little way behind, pictures snapping, just enjoying what was now a lovely day. Crossing back over the burn, I stopped to dip my hands in the clear water, lovely.

I managed to get some uncharacteristic speed as I moved on down past the waterfalls, pools, rocks and sapling trees, back through the 2 gates and to the road. Great.
The sun was out, blue skies yet looking back up, Bla Bheinn was still sulking under murky clag above about 5-600mtrs, moody git!

So, back to the car, Wullie checked, no blood on the gammy ankle. just over 4.5 hrs for my first Skye Munro, none too shabby.

Bla Bheinn was, I thought, a straightforward path walk to the top. We all agreed we were not expecting as much of the rocky stuff, which wasn't hard, just unexpected.

A fantastic end to a hit and miss week, Rain, sun, wind, more rain, then some more wind etc....Skye can't be planned it seems, so future sortees will be short notice on the back of high pressure forecasts lol.

A wee blue balloon on Skye and number 83 for me.

Oh, Gill, what a shame you hadn't waited one more day. At lunch time on the 24th all the cloud lifted and the whole area was basked in sunshine. Good for you for persevering but I'm sorry that you didn't get the views. Never mind, next time you are up you will see the whole ridge

Oh indeed Annie, duty called and Wullie was driving so had to go home Saturday morning. Ive seen others pics from the following few days and we missed out big time. Still, 2 days guiding in credit and will be watching the weather over the coming months for a short notice revisit.

Such a pity with the weather but never mind you get to go back!