From the ridiculous to the sublime - a sunny Kintail

From the ridiculous to the sublime - a sunny Kintail


The 'ridiculous' being the second half of the Brothers / Sisters traverse on Saturday, today was 'sublime' in comparison.

As the rain which fell from Saturday until Sunday night had now abated, we opted to head to the doubler of A'Chralaig and Mullach Fraoch-Choire .

A'Chralaig, I have now discovered, is the highest hill in the Kintail region at 1120mtrs and most of this height is done in one go, straight up the front. From the same car park we used in January for Ciste Dubh we booted up and enjoyed the lovely morning it was turning out to be. Fantastic views of Loch Cluanie and the entire South Shiel Ridge from East to West. Still a fair bit of snow in the sheltered North facing gullys.

Off down the main road for a short distance before turning up left on a good sized track. After only a few yards, a cairn marked path heads off towards the slope. A discussion decided that we would head over to between two gullys for a direct ascent, up Fuaran Mor Chluainidh. But on following the marked path, we were lead to the left of this and up a good zig zag path which couldn't be seen from the track just below. 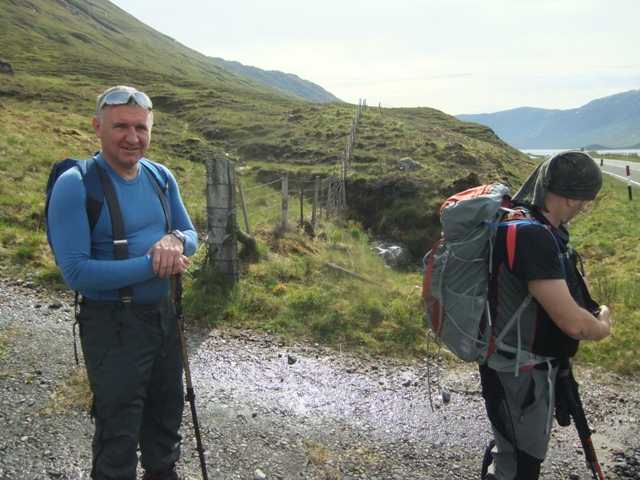 Almost ready for the off

The factor 30 was applied at some point on the way up as the sun was now beating down and the temperature rising. We chipped away at the steep climb, drink stops, breathers etc. Gaining height fairly quickly, we crossed some boggy sections below crags, watched another 2 walkers start on the track, and continue on the track, not taking our route up, possibly heading for Ciste Dubh (we met them much later and found out the missed the cairned path and just climbed straight up from further on) 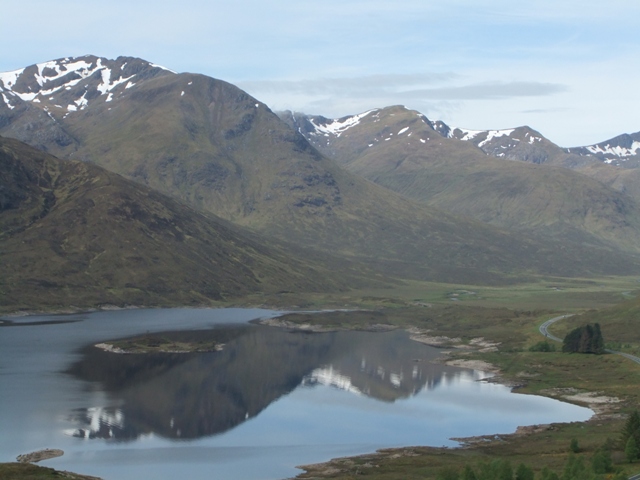 Over Cluanie to the South Shiel Ridge The only way is UP 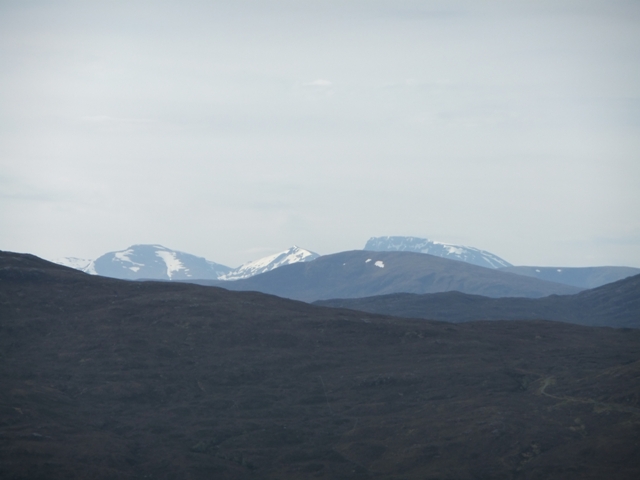 Nevis & CMD in the distance 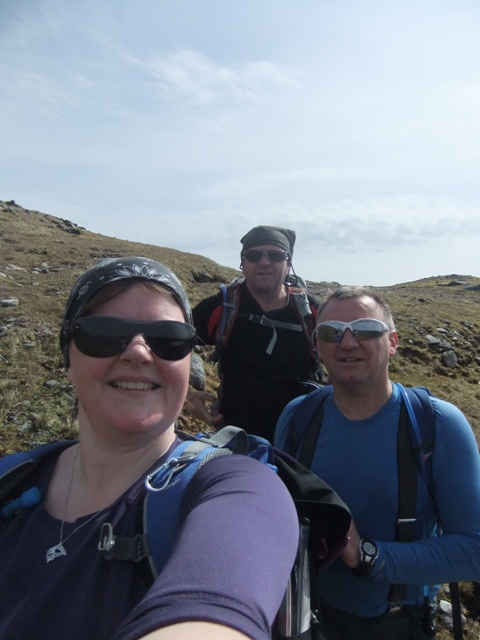 Around 900mtrs, the ascent lost a bit of its steepness and we were pretty soon on the even gentler slopes of the main shoulder up to the summit. I think this was about 2hrs in?? 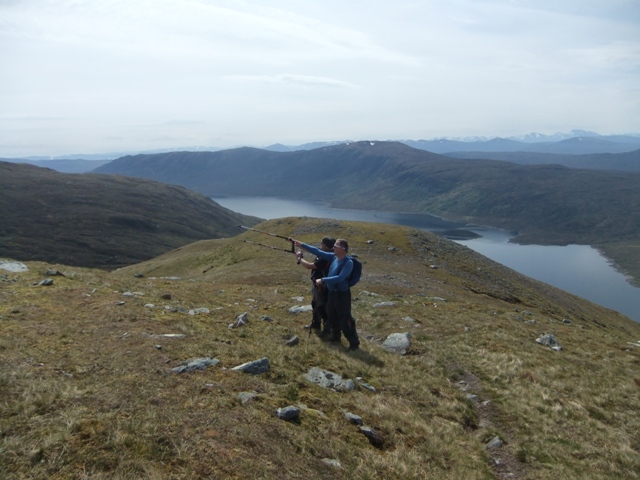 Cluanie behind, and the boys checking out another router for another day 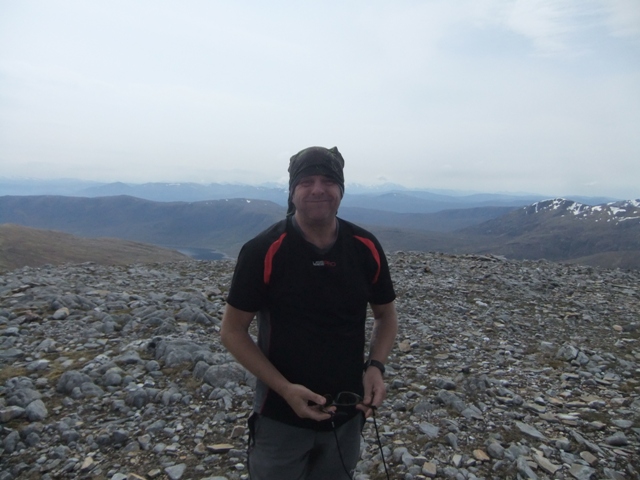 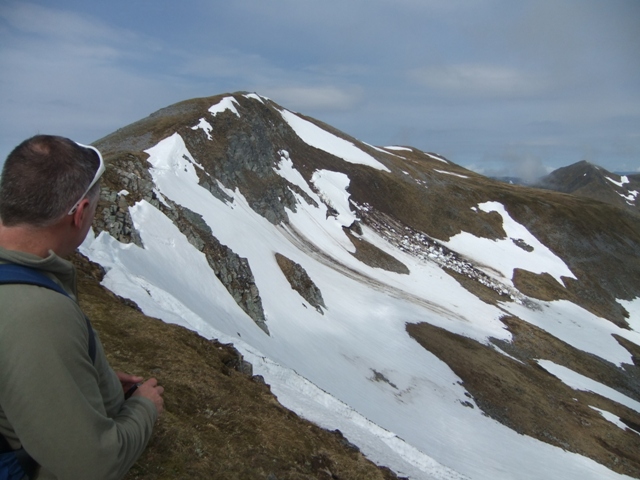 Shifting snow in the corrie

After a good gentle walk up the shoulder, we reached the top. The cairn here is huge, fittingly so for the highest in the area

Plenty of time and good weather, so spent some time, a bite to eat, some comedy pics etc

before heading off North on the ridgeline towards our second peak of the day. 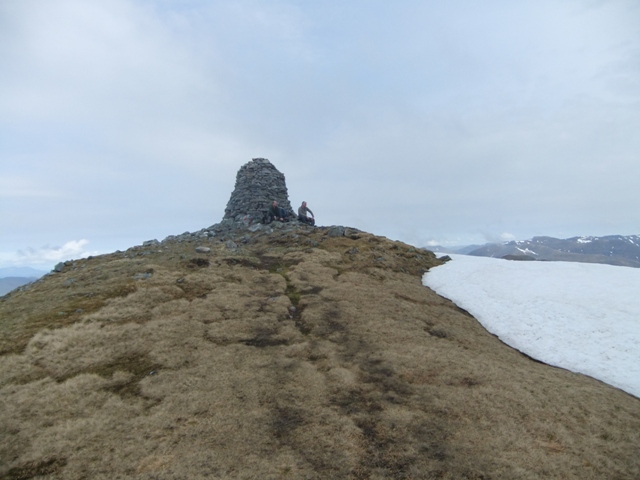 Up to the HUGE cairn 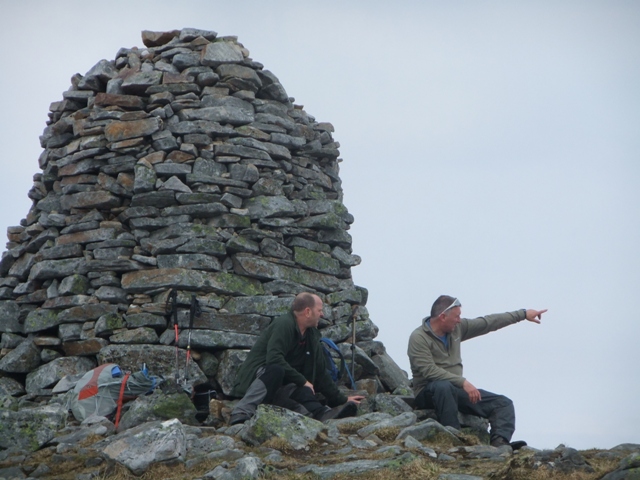 Pointing the way ahead 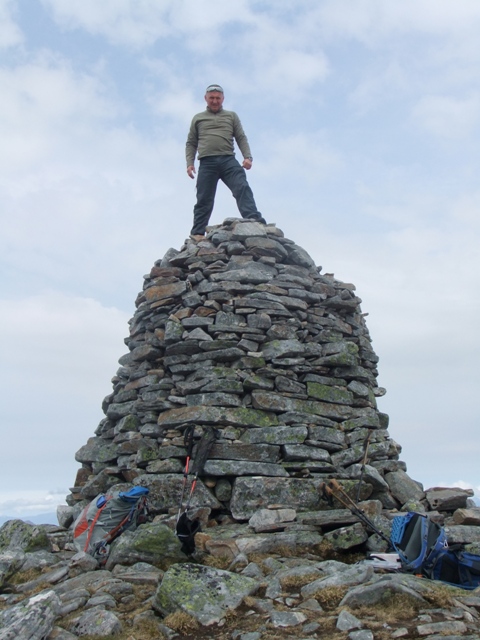 Whos the King o the Castle 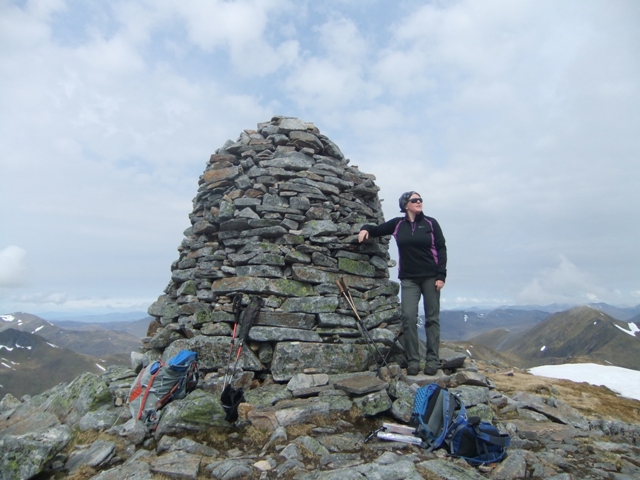 Wistful look into the distance lol

I must admit, on seeing the pinnacle speckled ridgeline leading to Mullach F C, I was a bit wary, I remembered reading about the ridges and a meandering bypass path so shouldn't be too much to worry about. 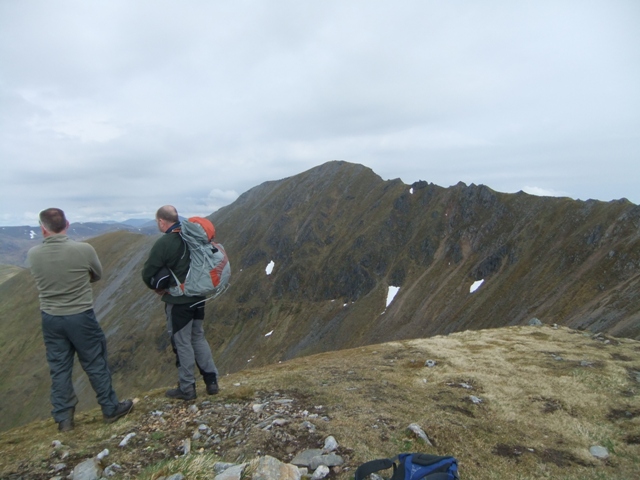 From the top of Stob Coire na Cralaig 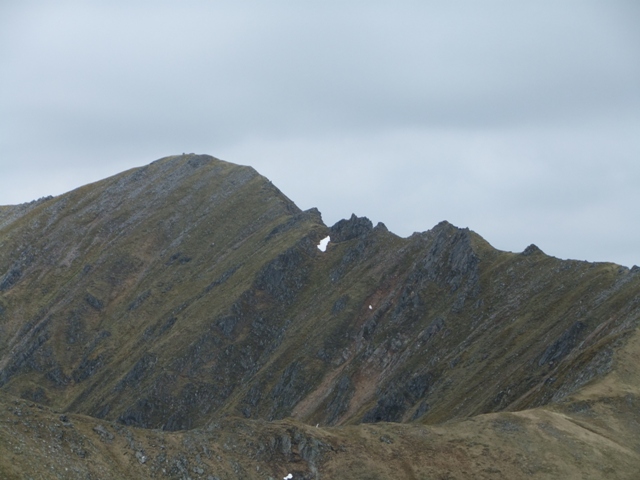 Close up of the ridge to MFC

As we dropped off the top of A'C, the old knee twinged a bit, despite the knee support. This is the only condition I know that makes me look forward to the 'up' sections lol

The undulating ridge was fab, evidence of avalanche under the big, grubby, hanging cornices, melting away from the hillsides. Won't be long until the North faces of Coire na Cralaig are clear of the white stuff. We sent a few rocks into bits, see if we could shift it, but no, still a bit to go yet and as the corrie sides were fairly gentle, it was in no rush to go anywhere.

Approaching MFC the pinnacles still looked a tad dodgy and skinny. From here we also had great views to a snow speckled Eastern face of Ciste Dhubh, a very distinctive hill and my first views from this side. Starting to climb again, we reached the top of Stob Coire na Cralaig before the path takes a sharp turn East before dropping slightly again above Coire Odhar. This vantage point gave fantastic views back along the ridge we had just done and A'Chralaig beyond. 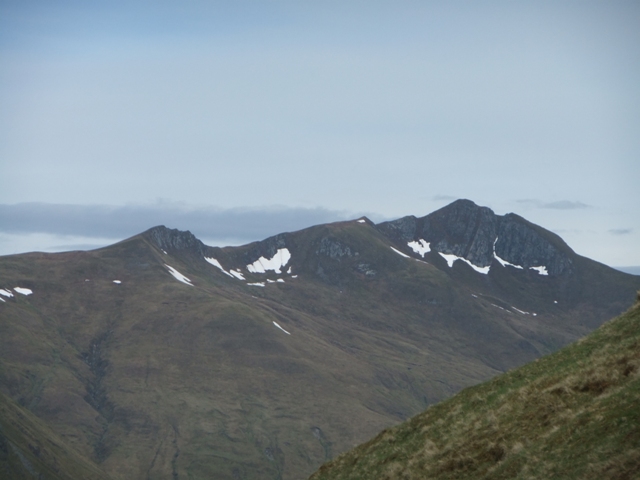 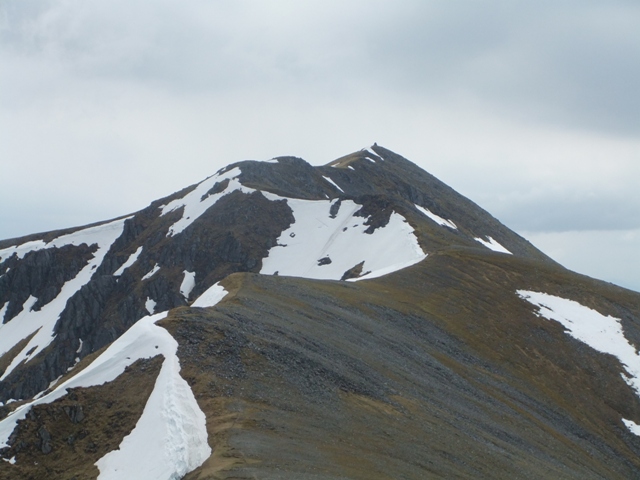 Back up the ridge to A Chralaig

The ridge narrows a bit as you climb towards Na Geurdain and the pinnacles beyond. As we climbed, we looked back and saw 2 people approach, then pass Stob Coire na Cralaig, following our route up. This rocky section is a lot shorter than it looks from afar.

Passing round the corrie, we had seen a path head off down with several sets of footprints crossing the snow lying nearer the bottom. Beyond the snow, the ground looked boggy and uneven, later discussion re using this as a descent.

Reaching a junction in the path, one heading up to the high rocks, the other off to the right and a bit lower. John headed up to the rocks to check out the scrambling option. Wullie and I just headed off down the bypass path. Worryingly, this headed downwards, but not for long. It skirted round under the rocks John was on, but as paths go,,this one wasn't going to last much longer than the next heavy downpour. Probably due to the weight of snow over the winter months, much of the path had a crack running along its length and with little or no ground to the immediate right, nothing to keep it in place, so we carefully picked our way along, staying on the solid side. The path then starts to climb up between the pinnacles, reaching a juncture where we could see John up on the top to the left. A bit of helpful shouting from Wullie as to foot holds etc on the way down but John was a bit uncertain due to wet rock and opted to reverse down and follow us up the path. The path winds its way round to the left of the next section of pinnacle and we again had great views of the hills to the West, Ciste Dhubh, the Brothers and Sisters and back to the Shiel Ridge. 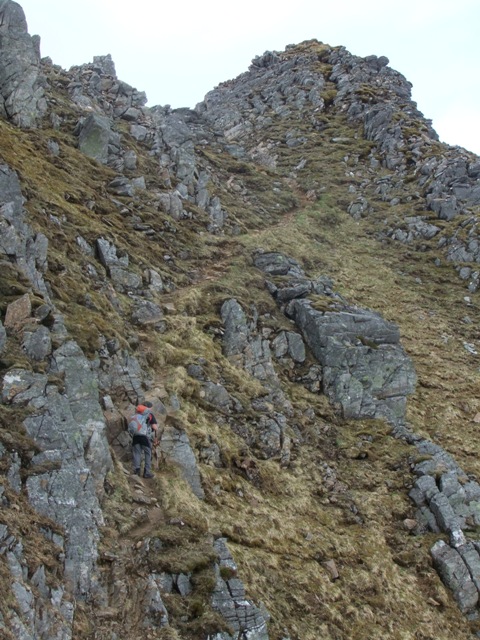 Wullie on the dodgy bypass path 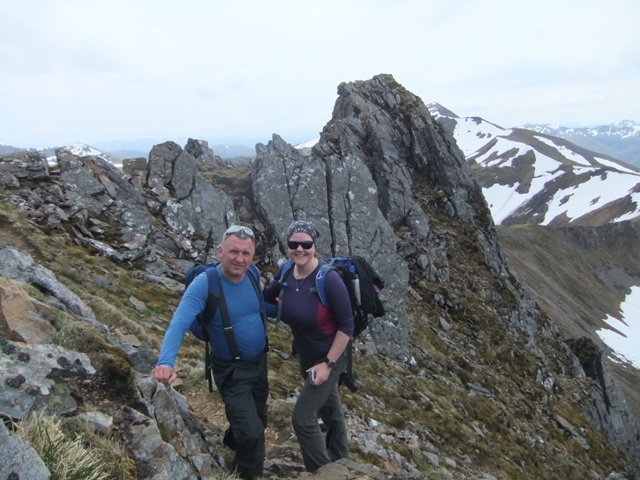 Rounding through the pinnacles with A Chralaig in the distance 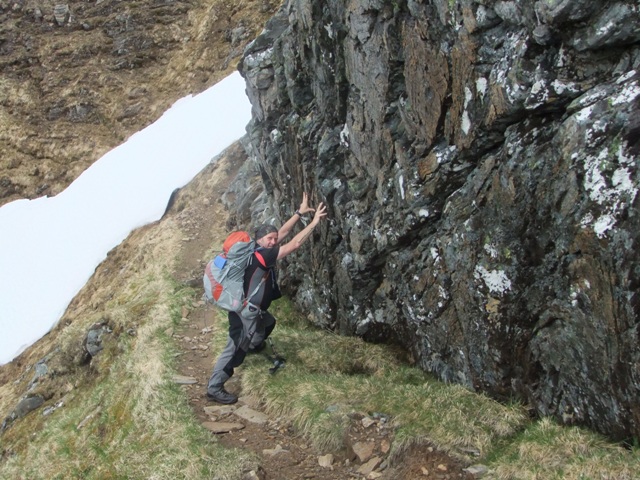 Wullie making sure the paths kept clear of random boulders

Pretty much immediately after, we hit the summit at 1102mtrs, not such a big cairn here

Standard pics taken, banana milk to replace the nutrients, some hill spotting around the great views and off we went. 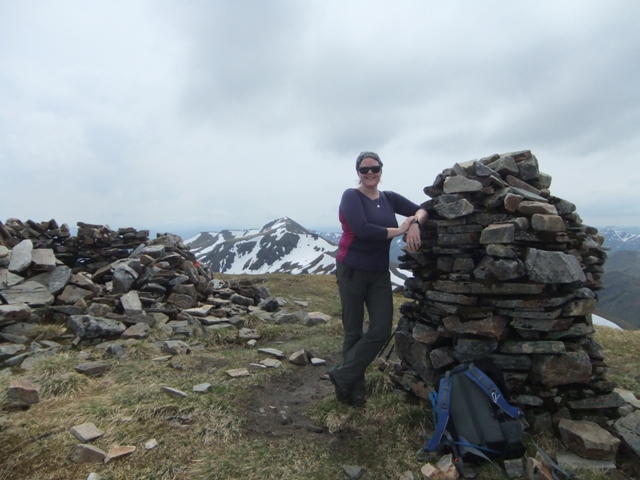 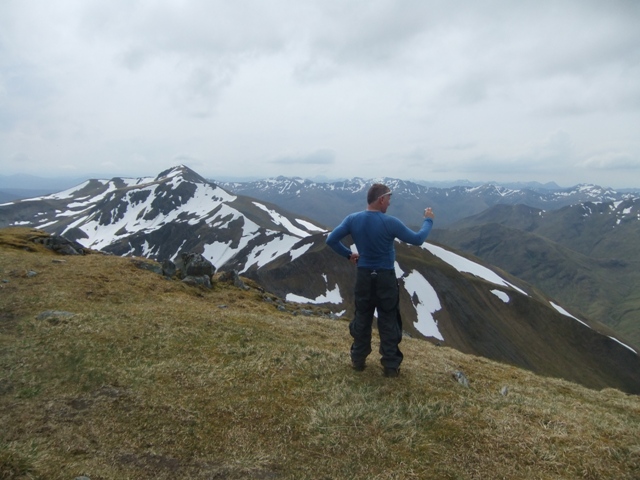 Is John flexing the old guns there lol 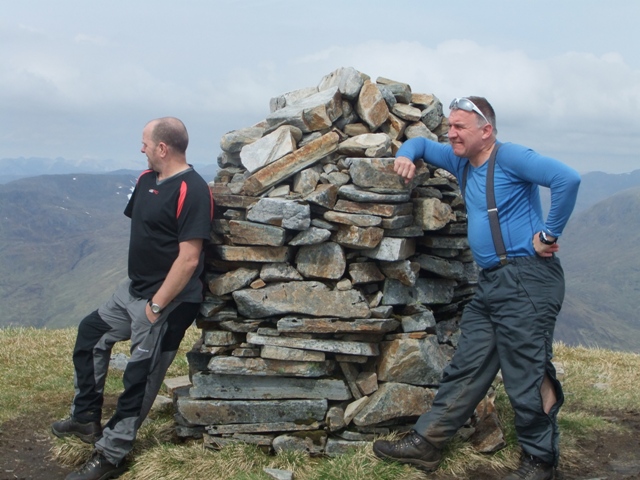 Pondering the day so far 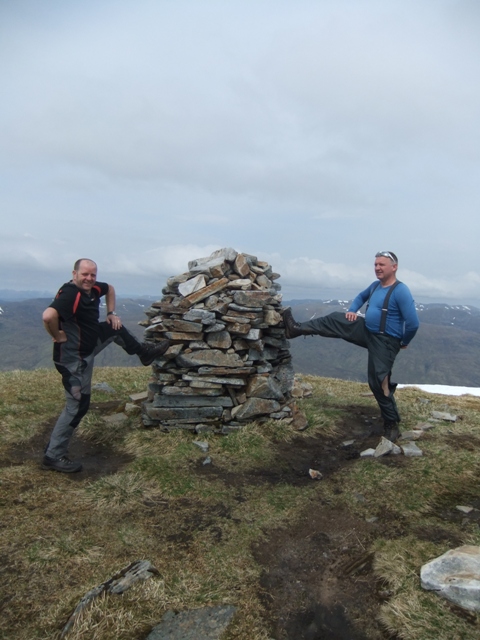 We met up with the following couple a short way off the top and stopped for a wee chat, discussing their different ascent etc, and our options for the descent. We had decided, after surveying the snowy corrie earlier, that we would be just as well heading back to the top on Stob Coire na Cralaig and dropping off the shoulder, so, that's what we did.

A good broad shoulder, steep in places but generally good going and once below the higher stages, mainly grass heading on down to the track that leads up to Alltbeithe YH. As we reached the track, the couple from earlier were coming round from the North, having descended into the snow filled gully.

My knee by this time was VERY sore, and I was goaded with shouts of Run Forest, Run as I limped along trying not to bend my right leg on a broken and undulating path,,not easy. Id taken about 4 co codamol by now and was feeling a bit zonked,,but they weren't doing anything for the pain lol

We chatted for a moment with a heavily laden couple, sitting on a rock, on their way to the YH. The couple behind caught up and we sauntered with them for the rest of the descent down the good track. The weather was lovely, smashing sunny evening. As we reached the bottom and the cairned path of our ascent, they confirmed that no, they didn't see this on the way in. 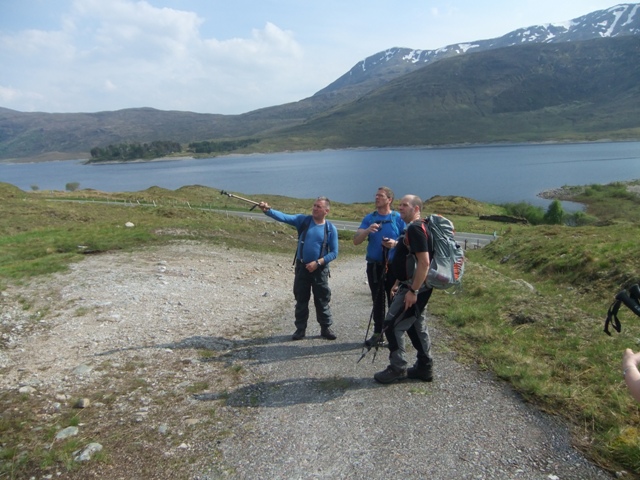 Back at the bottom and showing someone the path we took

Back to the cars, John heading straight off for a whistlestop visit to Glasgow, back tomorrow, Wullie and I, back to Kintail to raid the shop for alcohol (having all finished our weeks beer supply in 2 days due to the 36hrs of horrendous weather) and nursing a wee bit of sunburn, forearms, neck and the inevitable sunglasses leg marks lol

Last night in Kintail before breaking camp and heading for Skye in the morning. To Be Continued......

"Wistful look into the distance lol" photo = Catalogue Pose No. 99

Yet another great report and great descriptions/directions. Hope the bypass path holds out

..I enjoyed these hills

Don't you just love our weather, soaked to the skin one day, wall to wall sunshine a couple of days later

Loved the photo of the monster cairn, who builds/creates them to make them that big

Some nice shots on another good day out.

Dont think that path will last, hope it goes when no one's about.

I'm glad that dodgy path was there last July when we were there!