Dementors at the Glenfinnan Munros

Dementors at the Glenfinnan Munros


I had always looked with mixed feeling towards Sgurr nan Coireachan and Sgurr Thuilm or in short the Glenfinnan Munros. The area looked beautiful, but it seemed such a long day out.

Sgurr nan Coireachan translates roughly to ...Annoyingly long, with blind summits and Sgurr Thuilm...Boggy with useless paths, were beautiful mountains (at least until you got to know them)

My friend Sandy had agreed to join me and together we arrived just after 9:00 am at Glenfinnan the car park which was already mobbed.

Feeling a bit lost were to park, we were in luck when one of the Glenfinnan Estate Staff was keen to show us a place were we could park the car.

Why on earth there are so many animals under threat of extinction, when regardless of how many Midges we kill, they seem to survive? (If Midges seem to survive baths of Skin so soft, Smidge, Deed etc we should maybe use them on the rare animals for a plentiful comeback?)

With a red angry itching lump on my arm we finally set off and luckily the beautiful countryside let me forget the midges soon after. The area was stunning and I loved the Glenfinnan Viaduct which seemed huge when you stand under it. 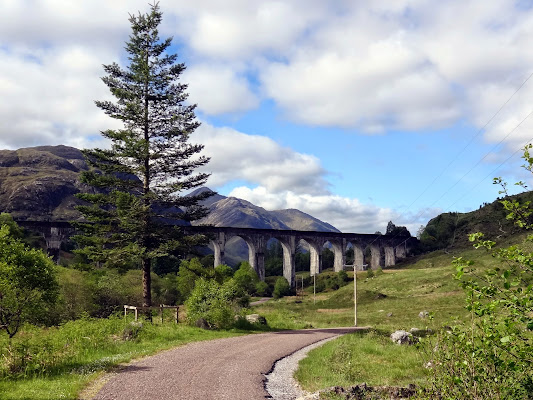 Not bad for views

Striding on we made good timing and soon passed the bothy. 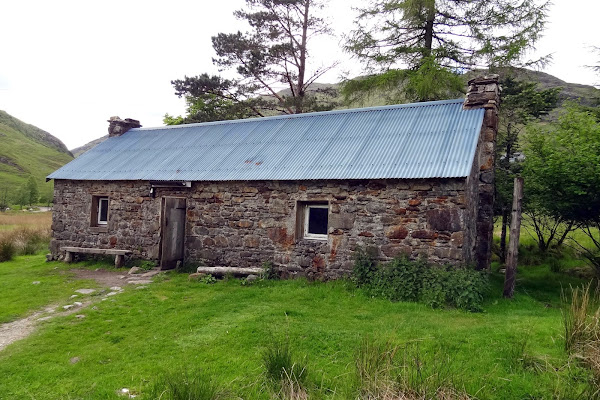 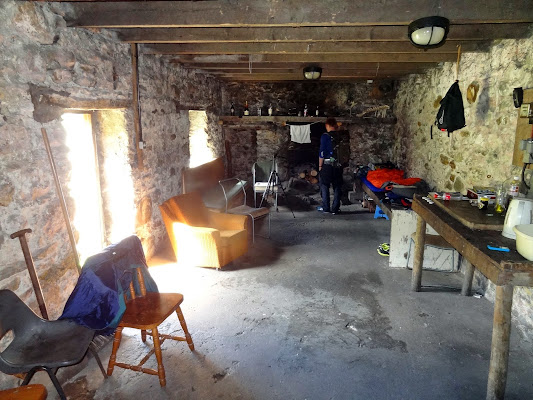 The 2 Munros are a horseshoe walk and we were not really sure which way to take up, but somehow fate decided that we should tackle Sgurr nan Coireachan first. We werent the only ones and feeling fit we bombed up the hill, soon overtaking the first few walkers. Looking back the countryside was stunning, but the path turned surprisingly boggy. I kind of remembered reading somewhere that the hill had 3 blind summits, but nothing could have prepared us for the time it took to climb the first bloddy Munro. 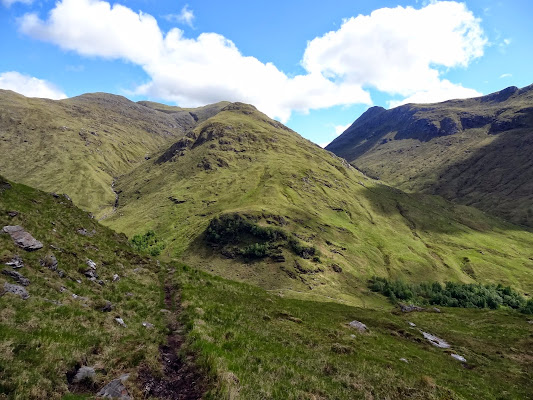 The start of the path with the view up Sgurr Thuilm 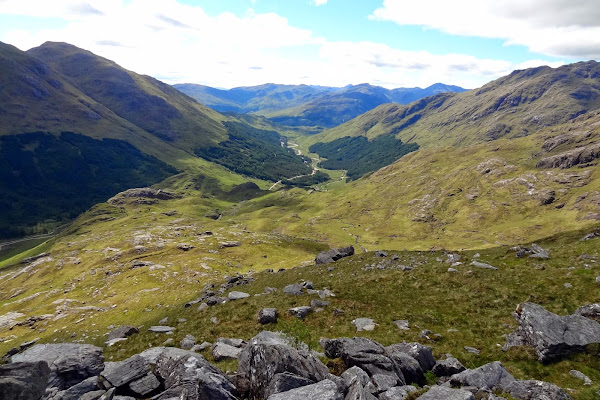 Having past the first blind summit, the second one was quite some distance away. Still full on energy we moved on, feeling great and agreed to have lunch at the top. But the hill had other surprises in stock. The path surely seemed to get longer with every step we took and by the time we arrived sweating at false summit No2 we crashed at the first grassy bit we could find and decided we needed fuel. 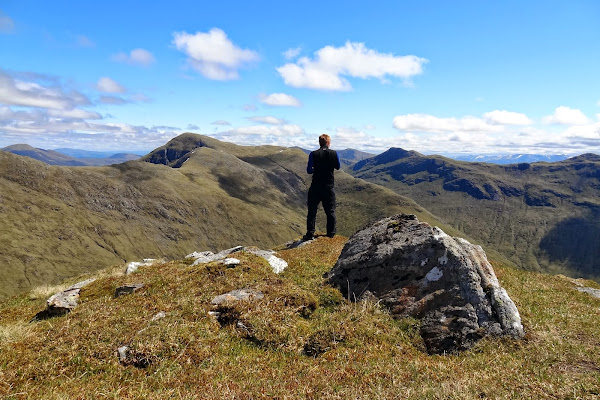 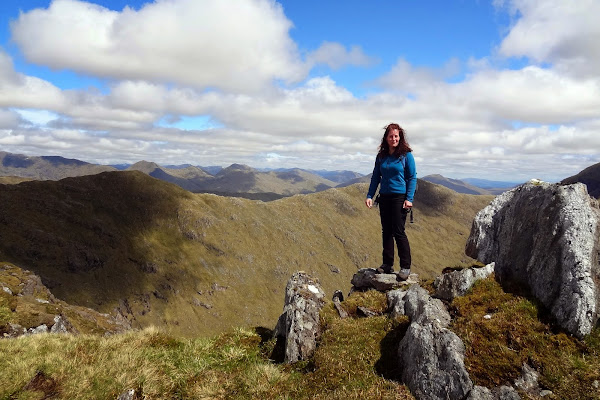 Myself on the edge 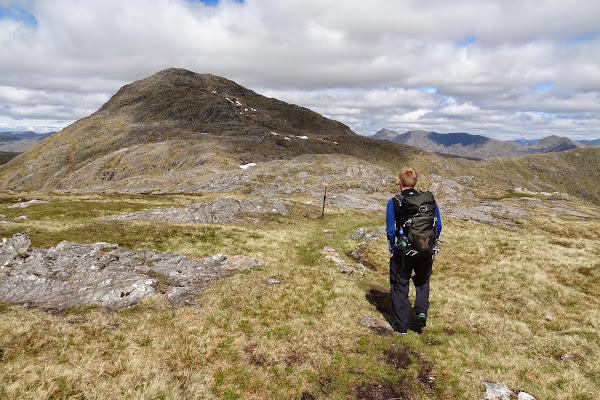 The slog to the top, after the second blind summit 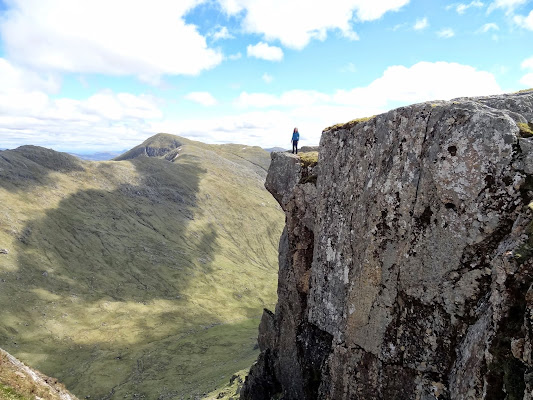 After a prolonged stop enjoying the food and warm sun, we set off towards the never ending slog to the top. The only thing left which was cheerful were the views.
But the pain was soon forgotten when we finally reached the cairn and were presented with beautiful views in all directions- absolutely stunning. 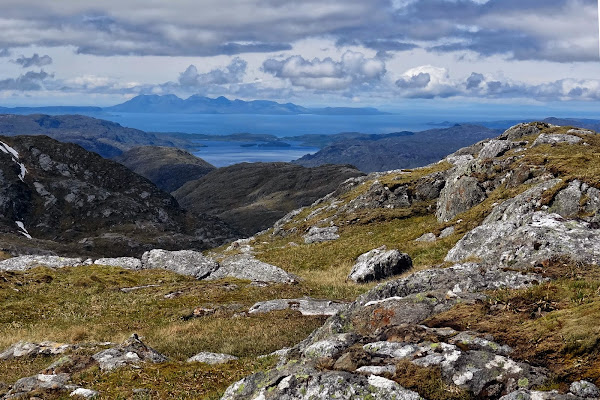 Towards the islands- aww 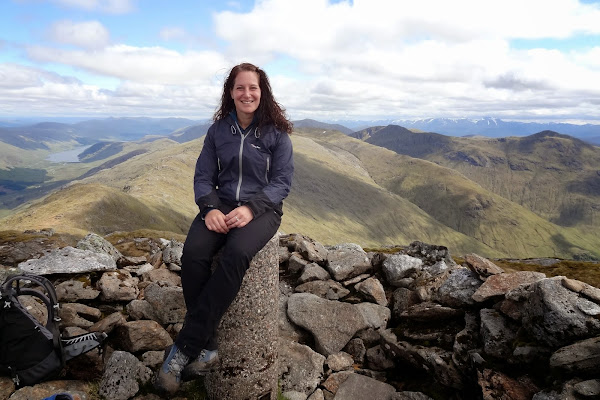 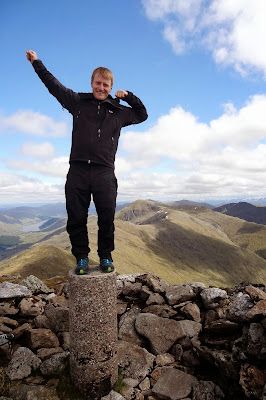 Ready to shoot on 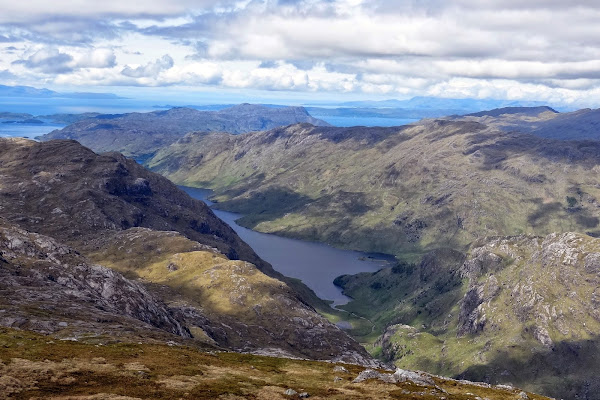 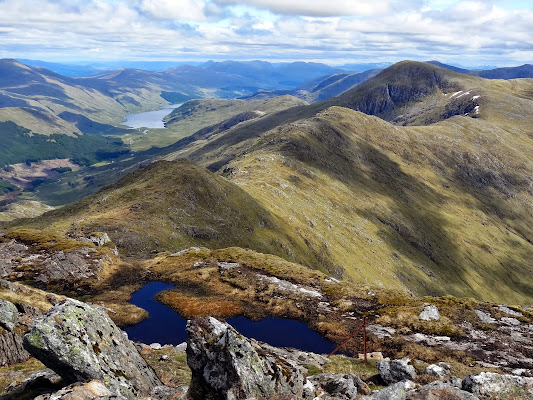 Towards the second Munro


Taking plenty of pictures, Sandy did not seem very happy with the long walk towards the next Munro which I had to agree looked daunting, but at least we were up.
We set off along the long ridge towards Sgurr Thuilm and what a ridge it was -endless!

We werent sure what it was, but the hill like the Harry Potter Dementors seemed to suck all energy, happiness and hope (to ever reach the next summit) out of us. It was a constant up and down and not a path were you can ignore your underfoot and stride on. We were close to give up hill walking and become Stamp Collectors, when the final summit finally (after god knows how many other blind summits) came into view. The last slog was surprisingly easy and relieved we stood on the second top just over 6h from setting off...what hard 6 hours it has been. 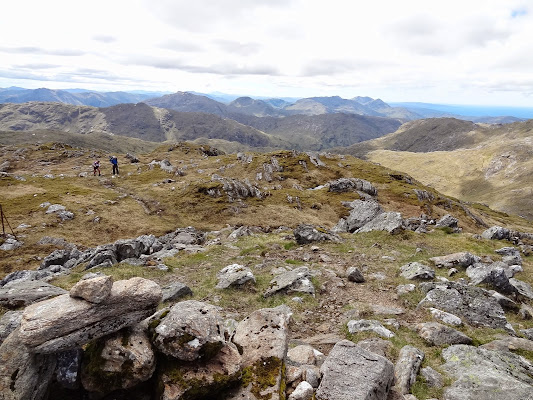 The not to nice path between endless boulders 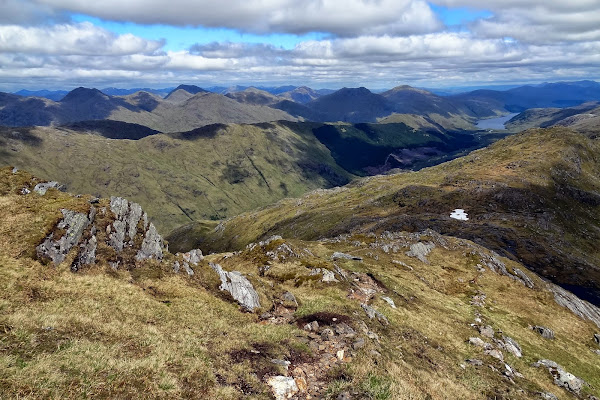 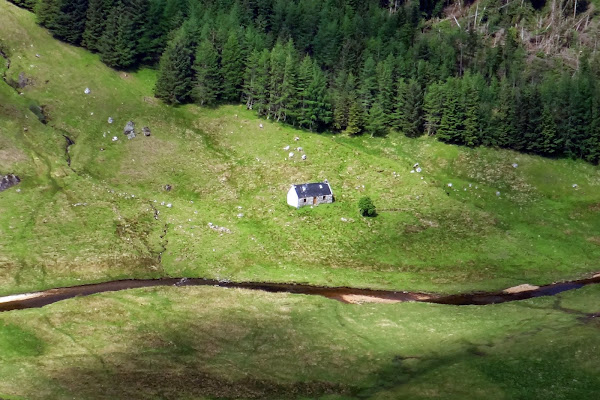 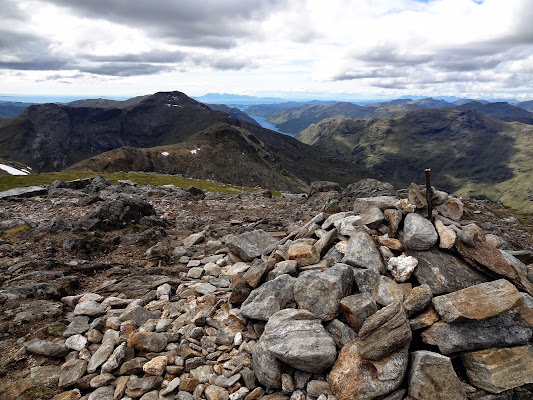 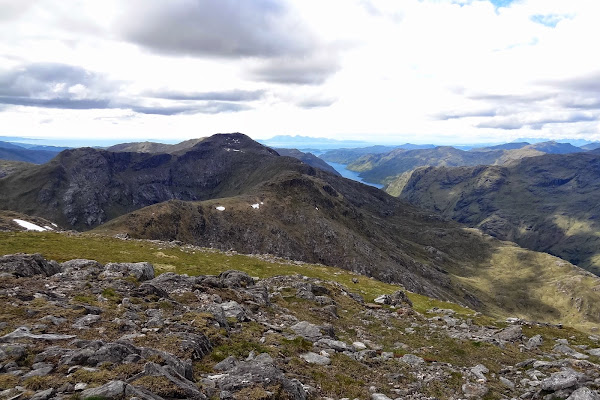 Looking back towards Sgurr nan Coireachan 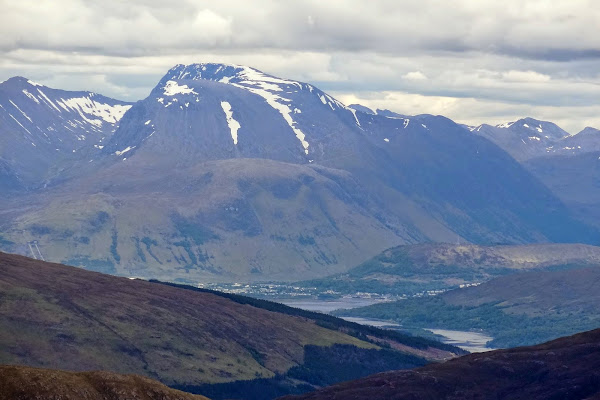 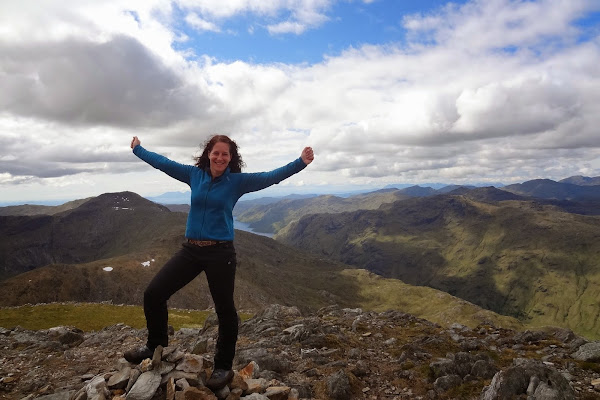 Happy to be done 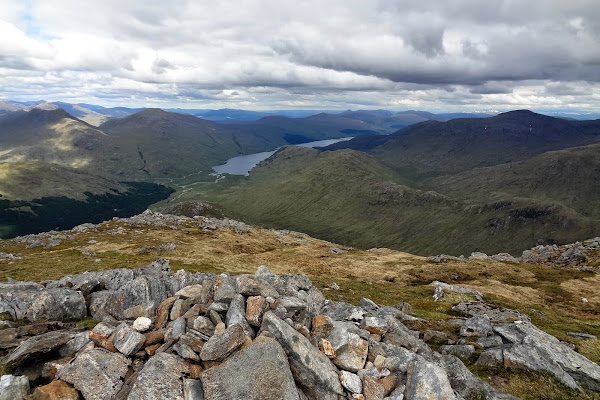 Neither of us fancied staying long, as we still had a long walk down ahead of us. The path was easy to follow and half way down the hill it started to get boggy. Avoiding the worst, we moved on, thirsty as we had drunk all our water supplies, but a burn halfway down helped us to freshen up and refill the water bottles.

Right at the bottom, just as if the hill wanted to tell us that it is not yet over, we still had to wade the last bit over soggy and waterlogged ground. We had some lucky escapes, as we slipped quite a few times on the wet under ground, but were lucky. What a relieve to be back at the path! Looking down I suddenly spotted a HUGE insect. Putting it on my leg for closer inspection and to take a photo I was told later that it was a black oil beetle which are nearly extinct. 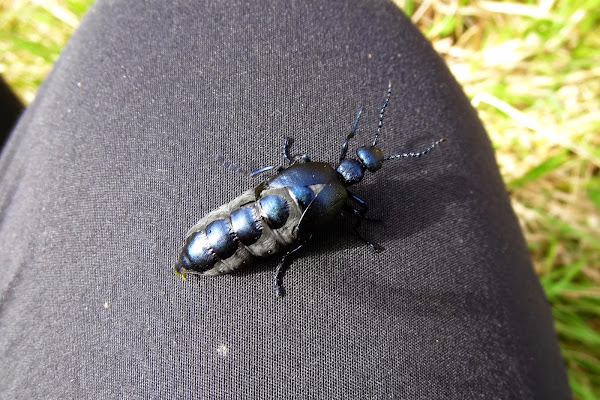 Somehow Sandy was not keen to inspect the beetle

and kept his distance lol. Moving on we eyed up the rows of mountain bikes we were tempted to borrow some (and as we joked) move it to a much saver place at the begin of the path.

Damn for being far to nice to ever to that lol.

But we did not had to worry as the path was not half as bad as we thought and short of 9h after setting off we arrived back at the car park. Even though we agreed neither of us was keen to return to these hills. it was a cracking day in great company!

A very long day out.

Nice one! It was a grand day: I think we must have passed you on the walk-in somewhere.

Been quite a long time since we first did these two: I'd forgotten how tough that ridge is

I was just looking at these two today,,,might back off for a bit lol

Enjoyed that as I didn't have to do it! You made the most of a long slog by taking some great photos

Will maybe get up that way this year, thanks for the 'boggy' warning & we all love false summits

Nice one ML, some nice images there..shame the beetles could not develop a taste for the midge..

do you think it would be better the other way around?

These two are real hard work (especially when you throw Streap into the mix too) but I loved them. The wild camp below the summit of SnC might have helped though.

mrssanta wrote:do you think it would be better the other way around?

Not much to choose really, having done it both ways! The ascent to Coireachan from the glen is a maybe a bit more interesting and less of a grind than the one to Thuilm, despite the false summits.

Still to do these two but having seen your pics I will definitely save them for a good, cloudless day

Never mind all the hard work, the views are worth it.

I hate false summits, too. The worst so far was A'Ghlass-bheinn, but this looks even more annoying

Good report there, will come in handy for me when my shot at these comes. Got to get a few snaps of the Barry Trotter bridge for the portfolio too

Many thanks for your comments!

Not really sure if the 2 hills would be better from the other way up. I spoke to a few people who said that the endless way down would be horrible and they like us choose first route up.

Great photos...especially the GlenPean bothy, must have used a super zoom.
Done these 2 on Saturday and have no doubt it's easier clockwise. I wouldn't fancy coming back down that rocky
ridge after enduring the energy sapping traverse between the 2 hills.
Clockwise for me and take yer bike...

Great report and love the photos! I'm doing these two next week on my way thru to Strathan. Where did you park btw, sounds like I'll need to get there early! Cheers