Ben Cruachan and then Oh No

Ben Cruachan and then Oh No


I had this walk earmarked having monitored the weather forecast closely all week, so it was up early & hitting the road west (again) at 6.30am.
One fly in the ointment was I wasn't feeling too great this morning, I could feel "manflu" developing, had a bit of a tickly cough last night. But my theory was a day on the hills will get rid of it

I arrived at the layby near the railway armed with my WH printout of the route, I was first in the layby so didn't have the problem of having to hunt for a parking space. I did notice that the Power Station visitor centre car park had a locked gate across, so that would have been a no no, don't know what time they unlock, but did notice a lone camper van 'trapped' inside 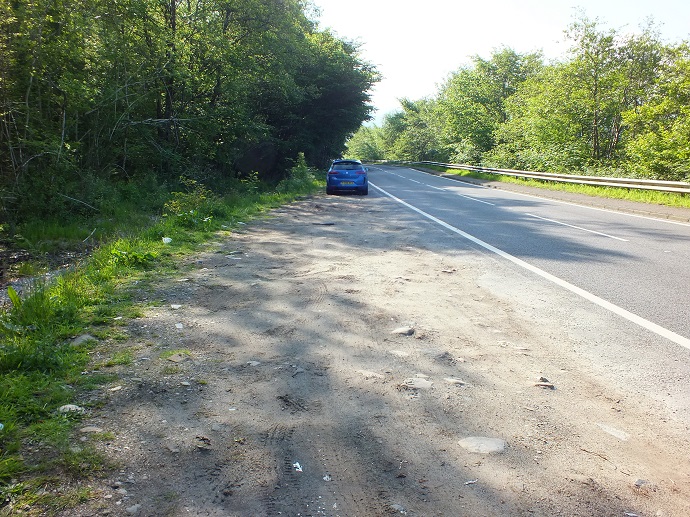 Parking area, me in pole position 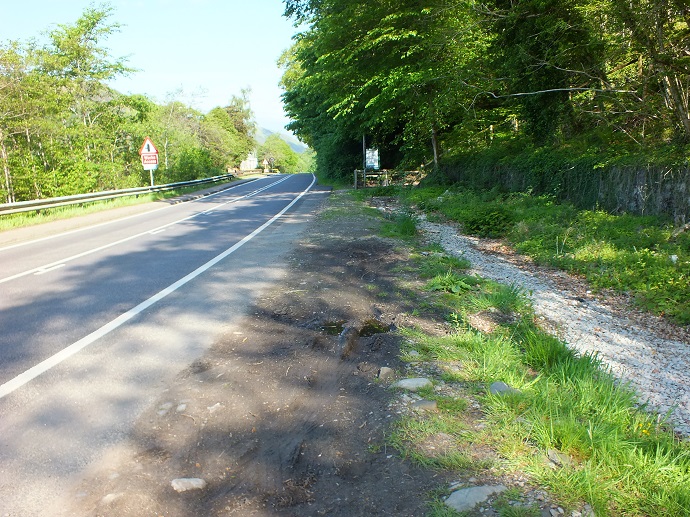 The rest of the make shift layby, with the start of the walk just at the end of the layby

I won't describe the route as that is already available. On opening the car door I was set upon by the Argyll midges who were trying to eat me alive. A quick rummage in my rucksack & it was out with the 'skin so soft', so that was splashed on any skin that was exposed to the hungry little blighters 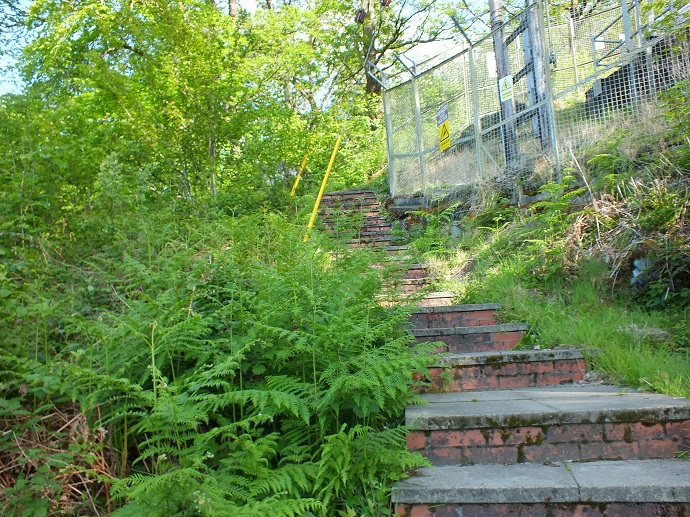 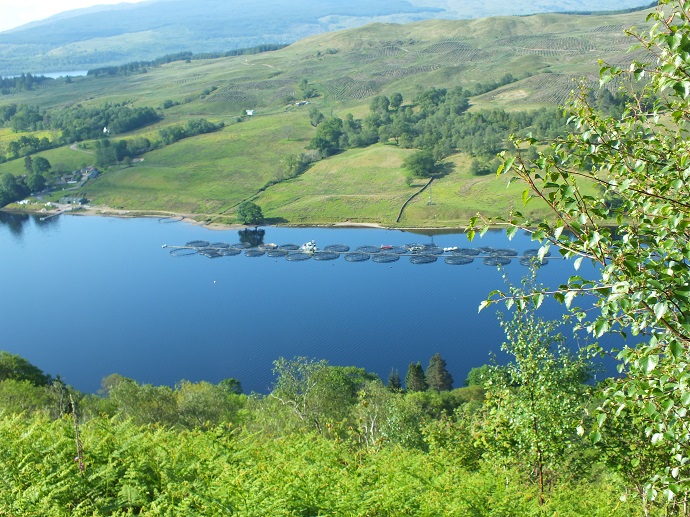 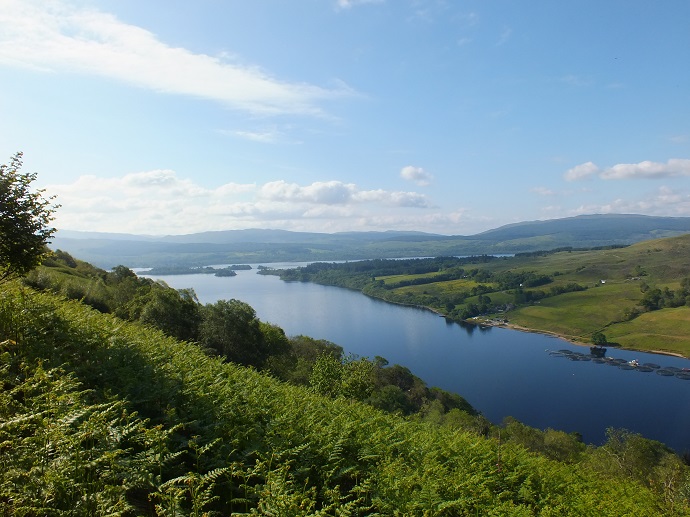 The walk up through the wooded area is fairly steep, the good thing is you gain height fairly quickly

I was feeling OK at this time & moving quite rapidly, mainly to prevent the midges devouring me & I soon reached the edge of the woodland. 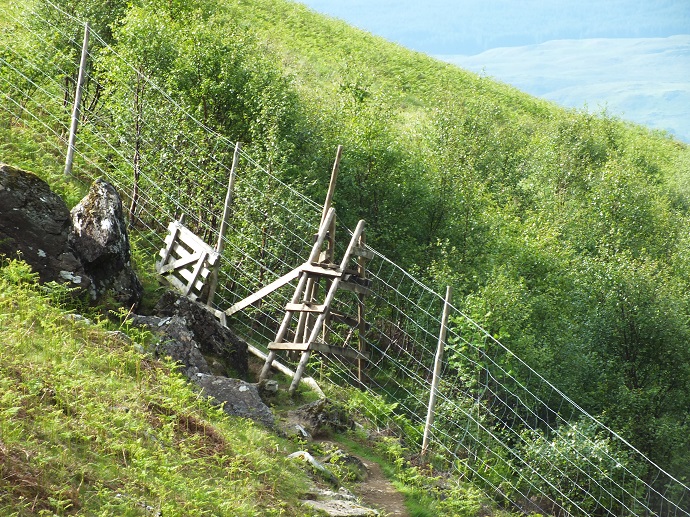 An obstacle to climb over 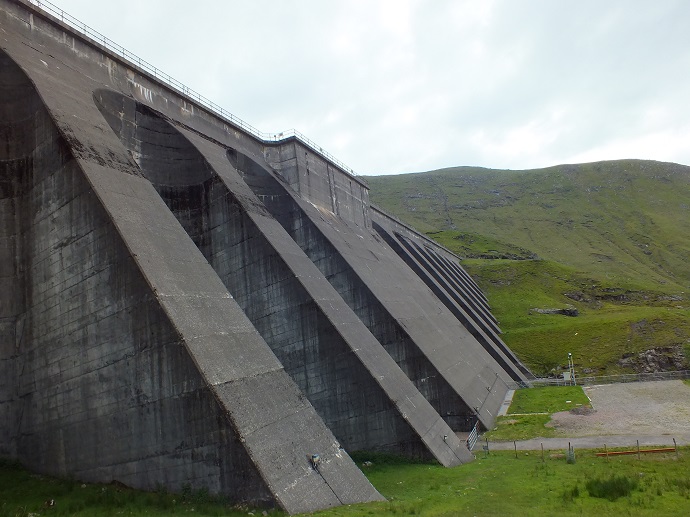 Cruachan Dam, how many tons of concrete were needed, quite a few me thinks 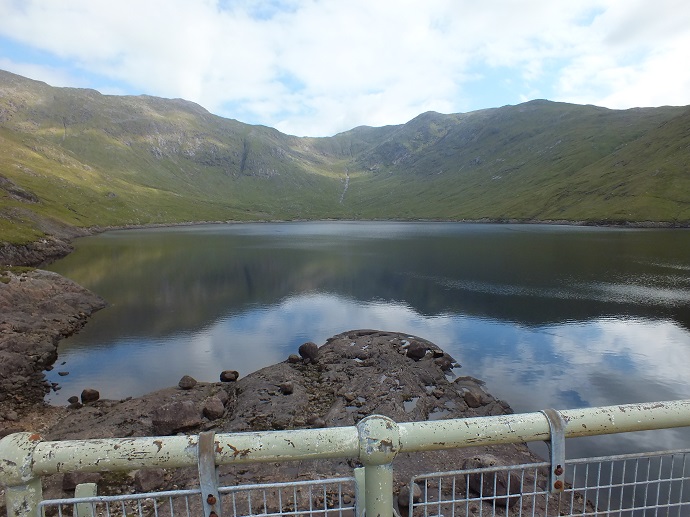 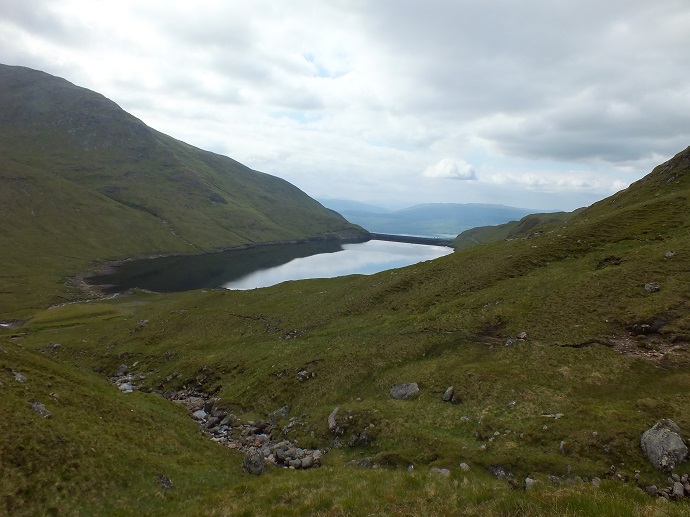 Cruachan Reservoir looking towards the dam

The walk round the dam & along side the reservoir are on a good path, my plan was to do the whole walk in 6 hours but things weren't really on track, maybe it was too hot - me & hot weather don't really go together. At the end of the reservoir you then turn left & head up to Coire Dearg along an easy path to start which then becomes steeper & to prevent erosion has been stoned near the top, which makes going tough

When you reach Coire Dearg there is a small lochan & a collapsed rusty old fence. 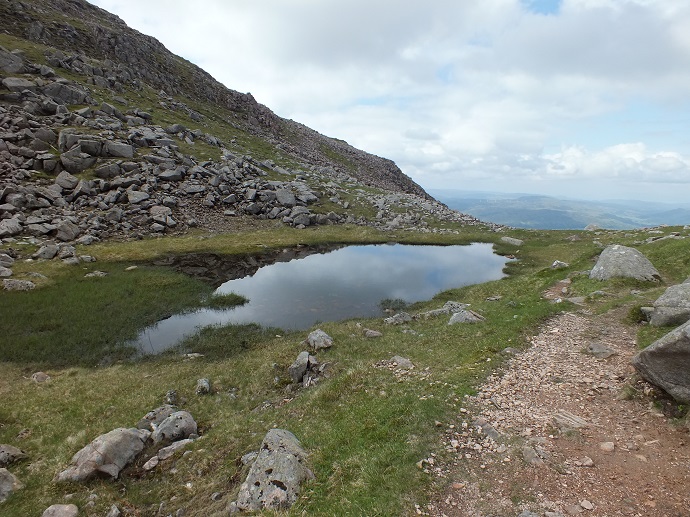 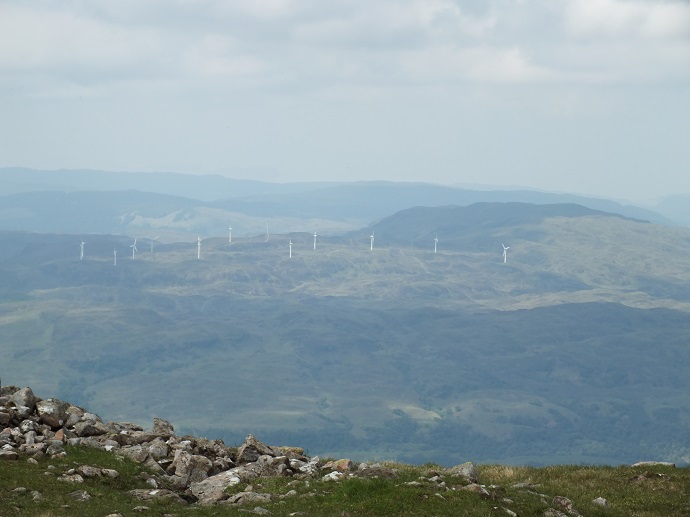 The obligatory wind farm, is there a hill that hasn't got one on the horizon? 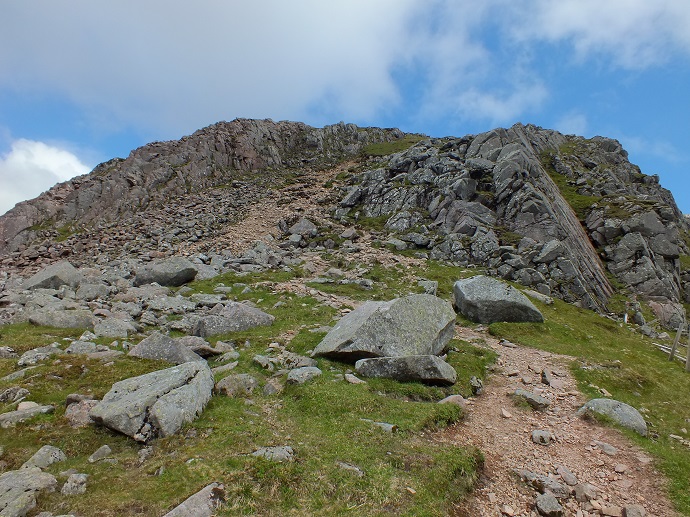 The path up to the summit, hard going

The route up to the summit of Cruachan seemed to be hard work, I was really struggling & feeling lethargic, umpteen stops, eventually reaching the summit after 3 & half hours 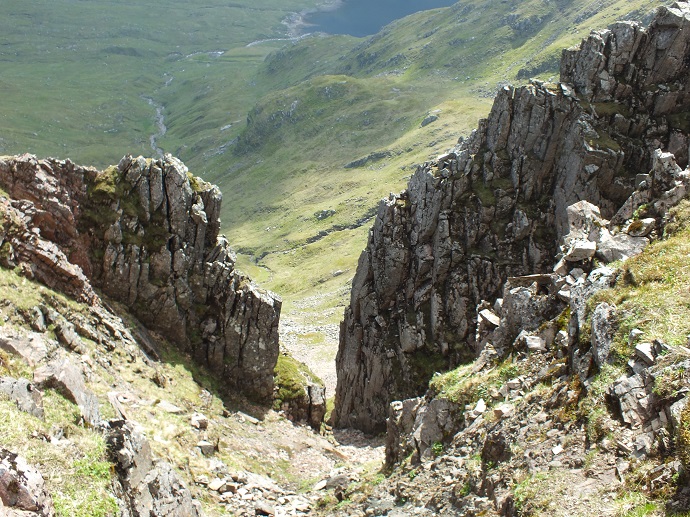 Looking back down through the gap

A few shots from the summit, sadly it was a wee bit hazy: 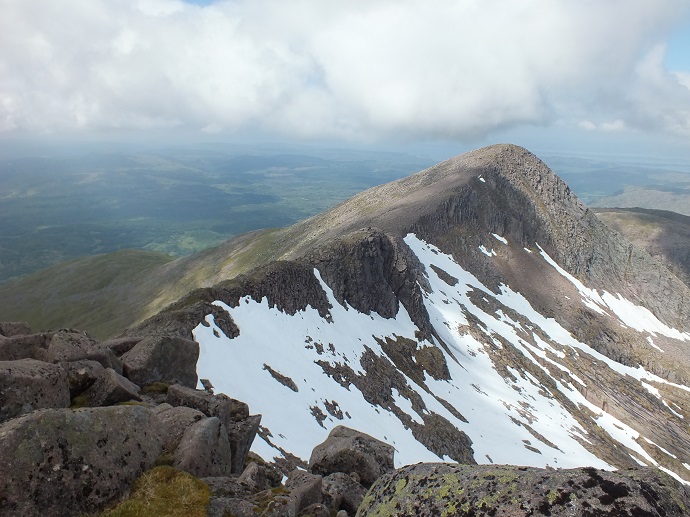 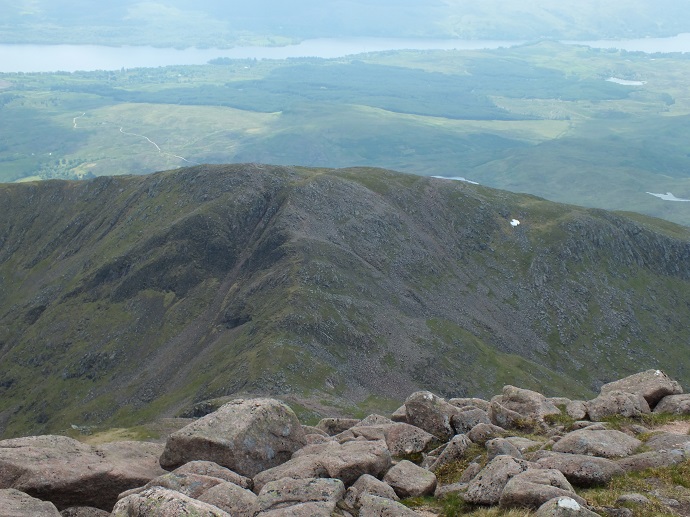 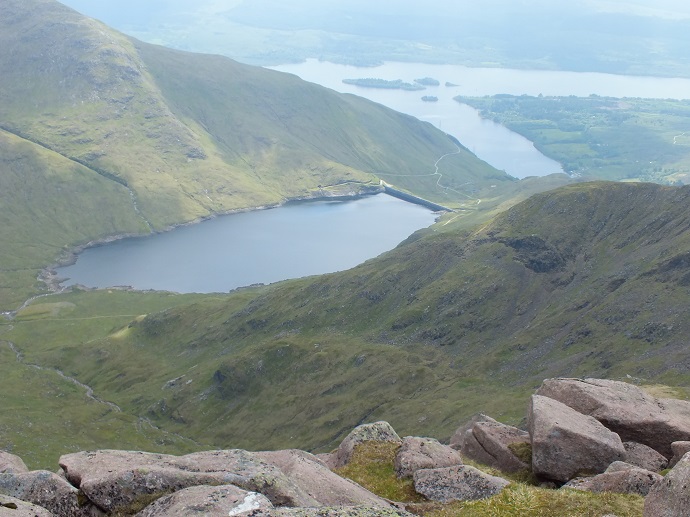 A cracking shot of Cruachan Reservoir with Loch Awe in the background, you wouldn't think there is 1000' drop between the two 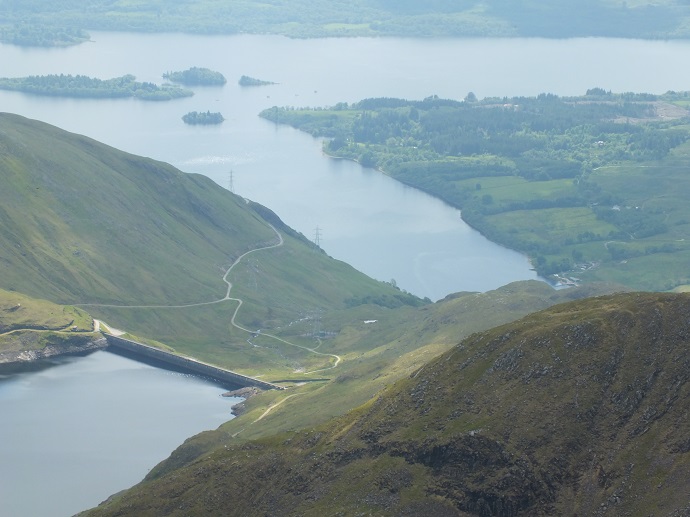 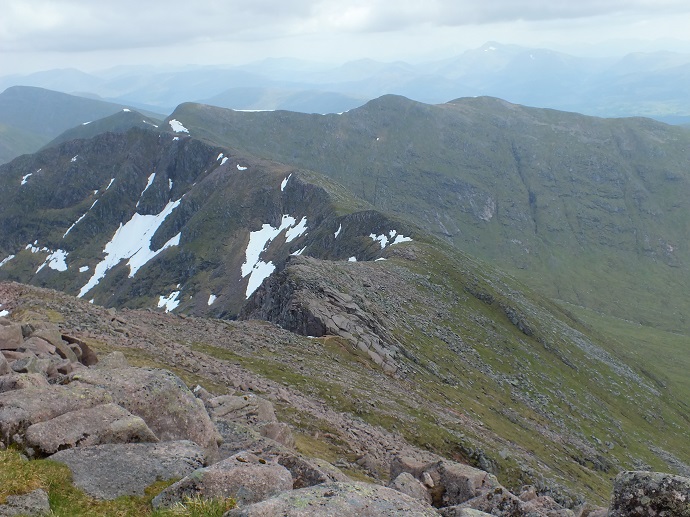 The ridge to the east, slabs look a bit scary 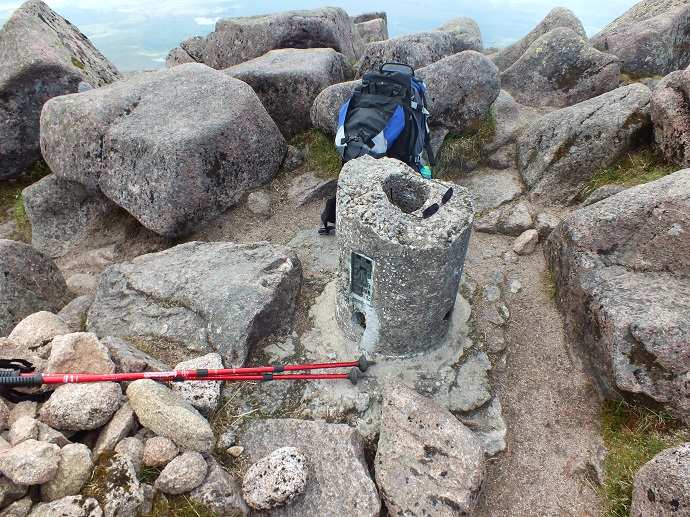 The remains of the trig point

I hadn't seen a single person all day & after taking umpteen photo's the plan was to head down the ridge to Stob Diamh. So the descending began until after about 30 metres or so I reached what looked like a drop of about 10feet, I looked for other options, but there appeared to be only one other & that looked worse

So being concious of how long I had taken so far (I had told Mrs Flyer I would be home at 4.30pm) I made an executive decision & decided to head back up & retrace my steps down

Had I been accompanied I would have continued but I didn't want to take any risks, especially as the slabs were still to come

The descent from the summit was so much easier than the ascent & I met my first human beings of the day a couple of guys not far from the summit, I was well off the rocky path picking my way down on any grassy bits that appeared.
The descent was actually easier than I was expecting, I met a couple on the path by the reservoir & they were looking a bit lost. So after a quick chat they confessed they didn't have a map as they had left it on a table at wherever they were staying. My good deed for the day was to hand over my WH print out of the route, so hopefully they managed to complete their walk

Arrived back at the car just under 6 hrs after leaving it, the midges weren't that bad on the descent, must have been too hot for them

Temp gauge in the car advised me it 20.5c so once mobile all windows were open

I kept thinking whilst walking up towards Coire Dearg how similar it is to Creag Meagaidh, just a thought, shame I didn't complete the whole route but safety first with me, Stob Diamh will still be there next week & the week after

I did those two in similar weather to you and getting to the top of Ben Cruachan was harder work than I had anticipated. I didn't feel the slabs were too tricky but if you're not sure then it's the right decision to head home.

Manflu and midges, how did you manage to get so far

I think I recall the 10ft drop you mention. A friend and I did this one winter, for the first time, and also came to a drop. We couldn't find a way down and also retreated. We did both again another time after realizing that you go back the way and find a path that skirts around this drop. Best to keep safe though, the Mrs wouldn't have been pleased if dinner got cold!!

Well done Martin, on the views if nothing else lol Smashing,
( this was one of my first munros and I don't remember a thing as I was simply lead up it in clag from ground level) Will do it again when I go back for the neighbour.

Tough call there Martin - and a tough walk in the heat as well. Did it with my daughter a couple of years ago and we were relieved that the slab's bark was worse than its bite.

It's a spectacular connection to the other Munro and one I'm sure you'll enjoy in the future.

Cruachan was my favourite or second favourite hill for a long time. First climbed it in 1988 when the trig point was still in tact and I stood atop and took a panoramic series of pics that I later had printed out and stuck on my bedroom wall. Not having easy access to transport back then I would gaze admiringly at the pics and think back to that walk that seemed so distant. It was the one that got me hooked on walking and on the west coast. Got a good day for it too mind.
You've got some good pics there though despite the haze. I like the seeming water bounded nature of the hill.

Did a couple of Gorm's last Friday - great day to be out in the hills. You should have been in Glen Feshie - no midge......

Another hill I hope to do this year, just hope I can get the same weather as you but with a bit of a breeze.