After checking the weather and seeing an 80% chance of cloud free summits and little chance of rain, I made some quick plans to get up a few hills with my husband and our two friends, Lorna and Nancy. The original plan was to head up Beinn Tulaichean and Cruach Ardrain from Rob Roy's place at Inverlochlarig, but after realizing that we only had one of the two maps needed to cover those hills, we opted for Stob Binnein from the same trailhead.

We started the walk with an immediate 600 m elevation gain up to Stob Invercarnaig to get us up on the ridge. We had a late start to the day, so we had our lunch by the small lochan and took in the views of the mountains and valley. Me, Lorna, and Nancy on our way to Stob Invercarnaig 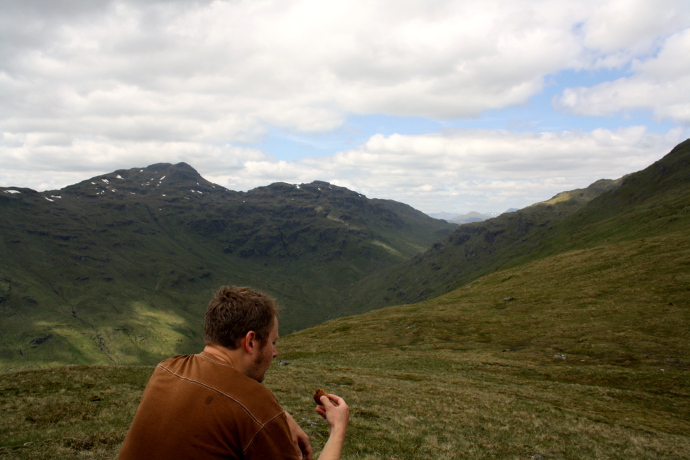 Ian with Stob Garbh and Stob Coire Bhuidhe in the background

After lunch, we headed along the ridge towards Stob Binnein. Because our plan was to do just the one hill that day, we walked at an easy, almost ambling pace and stopped frequently to look at the valley and hills. 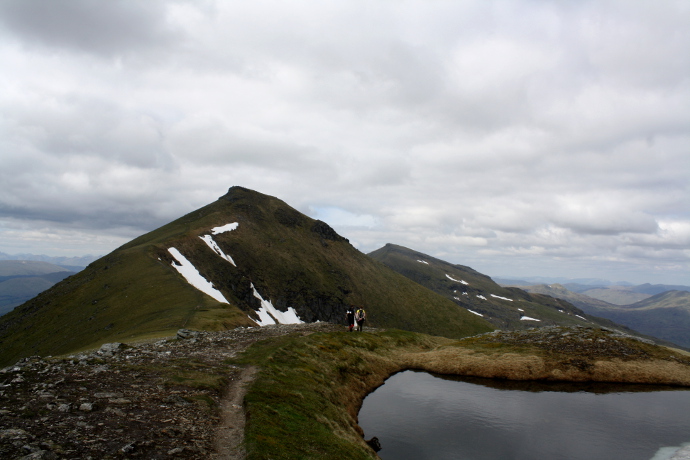 Getting close to Stob Binnein. Ben More is in the background.

We made the final push to Stob Binnein and were rewarded with an impressive clear view. On the summit, we chatted with two other hikers who pointed out a few notable peaks in our view, including Ben Nevis. They also pointed out Ben Ledi which Ian and I had hiked about 6 weeks earlier with a friend from America. That was unfortunately an ugly day out and at no point could we actually see the top of Ben Ledi, so we amused the two hikers by exclaiming "so that's what Ben Ledi looks like? We were just up there in April but never actually saw the shape of it due to the cloud!"

After chatting some more with the two hikers, they mentioned that it took them about an hour to get from the peak of Ben More to the peak of Stob Binnein. After realizing that we could just "quickly" get up and down Ben More we all looked at each other and after a short conversation that went something like "well, it's only 3:30, so we could easily get up Ben More and be back at the car by 7," we headed on towards Ben More. 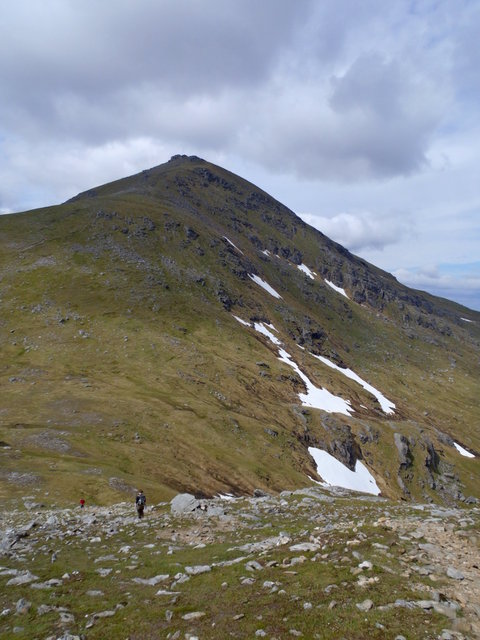 Down Stob Biennein towards Ben More

It took about and hour to get up to Ben More, and after a quick cake break, we started heading back. Instead of retracing our steps back, we decided to head down to the saddle inbetween the two peaks and follow that into the valley where we could pick up the trail along Inverlochlarig Burn. Heading down Ben More towards the saddle

After a bit of faff and some "botanizing" between Lorna and Nancy, we made it to Inverlochlarig Glen and back to the car. The Glen had impressive views and we had a nice time looking at plants and the invertebrates in the stream. Lorna and Nancy decided to take a quick swim in the burn and then we legged it down to the car. We drove down to Callander to get fish and chips and ate our dinner at twilight by a small pond in the town where the brown trout were actually leaping out of the water to get that night's hatch. I wis up Ben Vane yesterday. twis a braw day!

This is really good, been looking at similar route for a while. I think it just made top of the list.

Nice report, having read quite a few reports attacking SB & BM from the south, it certainly seems the best way

Unlike when I did it a few years ago from the north, what a slog

A take away always tastes great after a day on the hills.