This was a walk I had been planning to have a go at for a while and was one to do on our trip to Glen Shiel. Monday 26th May dawned looking promising the mountains had their cloud hats on but the breaks suggested a good day with the prospect of some decent views.

We decided on an early start hoping to avoid the heavy showers with the threat of thunder later on. We parked in the well constructed layby/carpark at Lundie jut opposite a sectin of the old road, got suited and booted and were off along a section of the old military road towards the communication tower, just opposite the tower the path up is marked by a small cairn and further up by road marker posts which we found rather odd.

This is a very good path and it continues at a steady gradient all the way up to the summit of Carn Ghluasaid. This part of the path goes over rock slabs, and is marked by a line of boulders 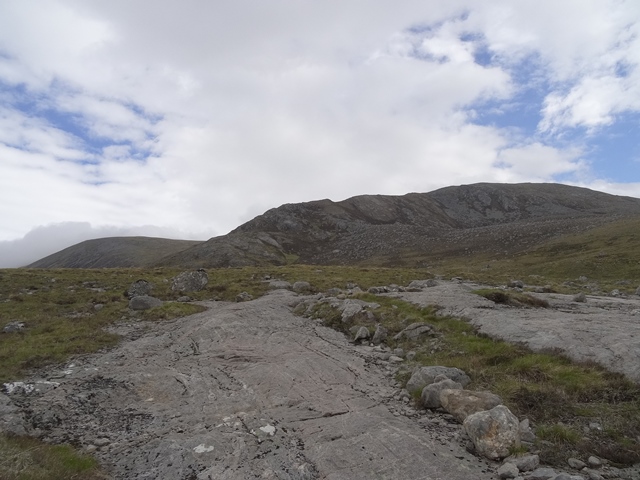 After this section the path became a wee bit steeper But the views were good

When we arrived at the summit the clouds were thin and the sun was poking through.

The cairn is right on the edge of the mountain and with no cloud at all we imagined the view was spectacular especially into the corrie. Denise at the summit

We set off for our second goal Sgurr nan Conbhairean,from the first summit the path is a bit vague travelling across scree but soon becomes good again slightly lower down, the view over to S.n.G was obscured by whispy cloud but we had enough to suggest it was quite a way away. The next goal hidden by whispy clouds

The path seemed to be travelling away from our goal but soon became more obvious as we went on, it looked a steep climb but, as so often happens, was'nt as bad as it looked and we were soon there. As we walked, the better the view became Denise at the summit of No 2

Here there is a large cairn with a bit of a shelter. We did get views from this summitand managed to see the way forward to Sail Chaorainn. The clouds broke enough to see the mountains around us and, what a view. There was still alot of snow around and it showed that up here we were only just out of winter. It's a steep descent to the bealach between S.n.G and S.C but the way forward was good though it seemed a long way. Heads down and we were soon there, on the way over we met a couple of other folk and when we arrived at the summit we saw four other people two of whom were familiar, turned out to be weaselmaster and sick kid, they were debating a longer walk onto A'Chralaig and Mullach Fraoch-choire, they decided to go for it so we wished them well and off they went, it's nice to meet people whose reports you read, it puts personalities to the words, and it's really nice to meet them, it was nice meeting you both, stay safe. Three good people on the summit of No 3 The view from No 3 Our route from here was to head over to Drochaid an Tuill Easaich and down the ridge from there,as we got to the top of the descent the rain arrived but did'nt last long after that the views opened up and Loch Cluanie looked grand from our vantage point, Looking over to Carn Ghluasaid

the sun came out and became quite warm and pleasant, just as well because this is a steep descent, my knee decided to complain, so the air was blue for a lot of the way down, I was glad to get to the Burn where we crossed and headed for the gate. Here the path goes left and heads towards the communication tower and maybe half an hour or so later we were back at the car.
This is another great walk in magnificent mountain scenery you never get bored because it's views, views and more views, fantastic.