Gleouraich and a schoolboy error

Gleouraich and a schoolboy error

Munros included on this walk: Gleouraich


We decided to have a go at these two because they looked an enjoyable pair and the views promised to be spectacular with the S.G.S.Ridge on one side, Knoydart and Gairich on the other and Loch Quoich nestled between the mountains. This was the first day of our holidays in Glen Shiel and this walk was high on the agenda, with the glorious weather we had on the drive up on Saturday, we were hoping for similar on Sunday.
Well we all know that perfection never reigns true in the mountains and we awoke to the usual clouds right down and the hint of rain in the air. That said, we were not going to be put off so we set off in good time hoping the conditions might improve the further south east we went. We managed to get a good spot for the car right opposite the post marking the start, we were going clockwise, one thing that we did notice was the poor deer that had met it's maker along side the path, it made the gearing up session a bit on the pungent side, poor thing.
It wasn't raining when we set off, great ,but the clouds were still hanging on, dratt. The path up Gleouraich is a well engineered affair and it was like this all the way to the summit. 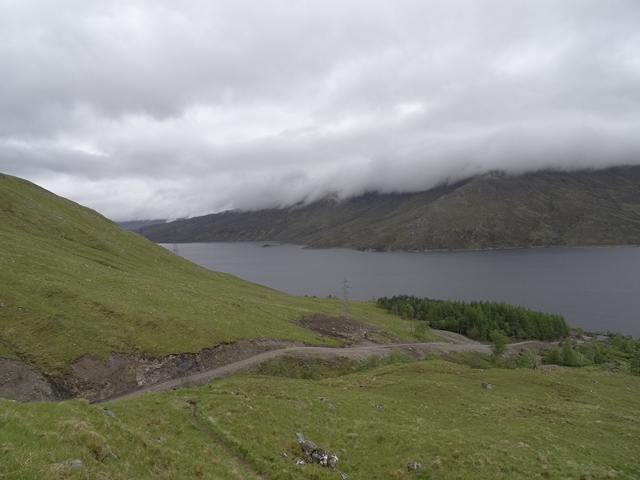 This was part of the Hydro works track, a bit of an eyesore we soon got into the cloud, bang goes the views, and got to the summit in not too much time and effort. At the summit we met two really nice lads, Matthew and Andy, who were from Aberdeen and Gleouraich was Matthew's 100th Munro, well done Matthew lets hope the next 182 treat you favourably. Matthew getting the dogs together before the walk into the gloom

With the mist as it was we decided to team up and wander over to Spidean Mialach together, safety in numbers and all that.
We found this part of the walk pretty straight forward and made steady progress in the mist not seeing much at all, we started the descent into Fiar Bealach which in the mist seemed further than I was happy with but a quick check of the map confirmed that it is a fair drop. In the Bealach we had a bite to eat, and suddenly the cloud parted and gave us a partial view of our surroundings. Denise on the "false summit" We thought we were celebrating

We thought the work was done so took the summit piccies and started our way down on a bearing I thought would lead us on to the path, but it did'nt, I thought it strange that a route like this would yield a good path but it just was'nt there. The hillside was getting steeper and steeper but we carried on down finding the slope becoming less steep the lower we got. Out of the cloud we got a better sence of where we were and concluded we'd drifed further over than we should have but eventually came across the stalkers path. This was where the penny started to drop

Matthew was doubtful about being on the summit and so was I judging our whereabouts and the angle of the hill. We carried on down, The views on the way down Lovely views, even though we were not where we should have been

Matthews two Springer Spaniels Roy and Rocky seemed to enjoy crunching on a sheeps skull they'd found much to Matthews annoyance but he managed to convince them it was'nt good for them and managed to hide it successfully. Back at the cars we said our farewells and went on our ways, two nice guy's I hope to meet up again sometime, good company always makes a day.
Back at the cottage that nagging feeling started to play on my mind. "did we get to the summit of Spidean Mialach?" I started to read past reports and the thing that kept clouting me around the head was how big and well built the cairn on the summit is, also BlackPanthers mention of false summits on the clockwise way round. It was then when the schoolboy error struck me like a demolition ball, that pile of stones was the 977m point not the summit and there was another 300m travelling and a slight drop before the true summit, I was very annoyed with myself and Denise was a bit disappointed she was minus a Munro, it's suprising what you miss in the mist and this was one hell of a blunder so it's a big slap on the wrists for martin.h.
In conclusion this is a good walk, especially if you get it right, We'll do it again and it'll teach me not to assume things are what your mind tells you, that's what the maps for!.

Re: Gleouraich and a schoolboy error

Pity about that spoiler but then it can be tricky in clag at times. Just wait for a great weather day before you go back and really enjoy it - such a great area for walking - cheers

Re: Gleouraich and a schoolboy error

Aww, that's too bad after all the effort. Good job though on going out in the mist in the first place. The next time you go, you'll get the views!