The Sisters were kind to us

The Sisters were kind to us


After reading many reports on W.H. about this walk and how it's held in great regard by the many people who have undertaken it we wanted to sample it for ourselves. I had wanted to do this walk in good weather and visability so this is how it panned out:-
The forecast for the 29th was good so we committed ourselves to the "Day of the Sisters". Thursday dawned overcast and damp in the air, not again, ahhhhhhgh. and it looked like it was going to remain that way. After a leisurely breakfast we looked again , no change,sodding hell!!!!!. We decided to give it a whirl, well you never know. We drove up the glen and parked in the carpark directly below Bealach an Lapain and saw it was shrouded in mist, We really wanted to do this in clear conditions because in mist it can be a bit tricky, I was ready for giving up there and then but Denise was a bit more enthusiastic so we decided to get to the bealach and take it from there.Off we went,up that slope and we know what that slope's like,up to the bealach in 1 hr 10 mins not bad and, lo' is that the cloud ashifting?. The weather getting better And the views opening up 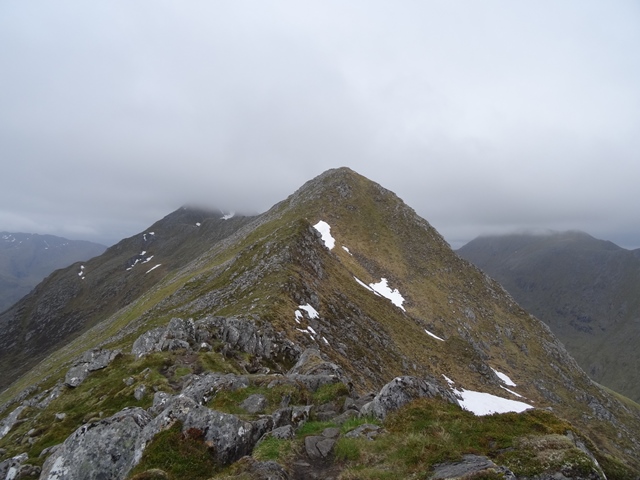 And where we'd come from

By the time we'd reached sgurr nan Spainteach the cloud was much higher and it was getting brighter we could see the summit of Sgurr na Ciste Duibhe,Saileag and most of the S.G.S.R was clear of cloud the views were definately opening up. Looking the way ahead we could see the bealach between No 2 & No 3 and the summits were just about clear wow!!!! The way forward and things to come The Brothers by this time were void of cloud as was all of the S.G.S.R and the Saddle was making a guest apperance.
The walk from Spainteach to S na CD is a steady and rocky traverse but with no problems, it just looks daunting from Spainteach. We were soon at the summit of No1 and the summit of Sgurr na Carnach was now out of cloud, this was a sight,and with Sgurr Fhuaran looked quite a long walk. The descent and reascent between No1 and No 2 looked wicked this turned out to be an interesting traverse with one or two rocky steps to descend none to cause concern it just keeps the brain active. 50 mins after leaving Sgurr na Ciste Duibhe we were at the summit of Sgurr na Carnach, this was a small milestone for me being my 50th Munro so with that and the weather I felt a sence of achievment. after the piccy's were taken we were off to summitNo 3 Sgurr Fhuaran, the descent between the two is again rocky with a longer downward scramble just before the ascent to No 3, this was nothing technical but the eye is drawn to the pull up, it looks and is steep but with a steady rhythmic plod its soon done with. by now the sun was shining so it was a warm pull up. After another 50 mins we were on the summit and the views were just brilliant especially The Saddle and Loch Duich. The Saddle from Sgurr Fhuaran

After a bite to eat we were ready for the onward march to sister No 4 Sgurr nan Saighead which looked a long way away, and the cliffs on the north side looked really impressive. 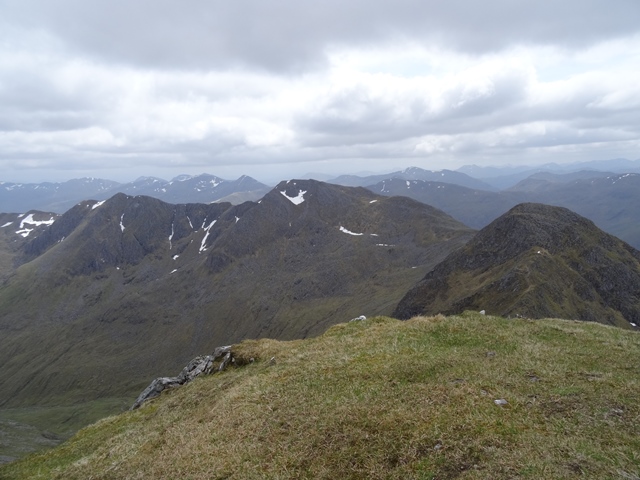 The cliffs of Sgurr nan Saighead

The initial descent is over loose and eroded ground, but once down in Bealach Buidhe the path greatly improves and becomes a hugely enjoyable ridge walk with great views ahead towards the cliffs. Looking back to Sgurr Fhuaran By this time my legs were faultering a bit and the knee was shouting at me, looking over to sister No 5 looked too much so we followed the natural route of the path downhill. On our way down after a fantastic day. This is one walk I'll do again, it was just brilliant.

After a short while we could see the way it was heading and it eventually dropped onto the main path from Allt a' Chruinn and from this point down to Allt a' Chruinn it is easy walking all the way down.
This was easily one of the best walks we've had, there was plenty of variety and it's a long 'un, but if you get the weather and the views like we did it's well worth spending time and the effort and taking it all in, it's truely magnificent.

Great that the weather cleared up for you. That looks like quite a challenging walk to do all of them in one go. Great report.

Well done on reaching the 50 mark Martin & Denise. Time to start plotting the next 50!!!

Well done. Id like to say Id go back in good weather for a view,,but after our hell on there,,thats a NO!

Nice one & well done on reaching the big 50, sadly it doesn't get any easier, still great fun though