[b]Friday 30th May and my last stretch of the Scottish National Trail: the 12.25 miles (19.5km) from Blairmore to Cape Wrath via Sandwood Bay. Left the car park at Blairmore at 0930 and arrrived at Cape Wrath at 1405. Time taken 6 hours 35 minutes. OS Map 9[/b]
Well, this was it, the last leg on my meander through Scotland from Kirk Yetholm to Cape Wrath loosely following the Scottish National Trail.
Refreshed after an excellent night's sleep and breakfast in the Old School, B & B in Inshegra (highly recommend) I was on my way at 0930.
Nice, easy, simple to follow track from Blairmore to Sandwood Bay. Sign at Blairmore says it's 4.5 miles to Sandwood Bay. On a good track like this - a motorway for walkers - that would be no problem. As befitted my last stretch it was a lovely morning, mainly blue skies with some high cloud.
This part of the walk is through moorland, passing close by a few small Lochs. Path was good, dry and well constructed. 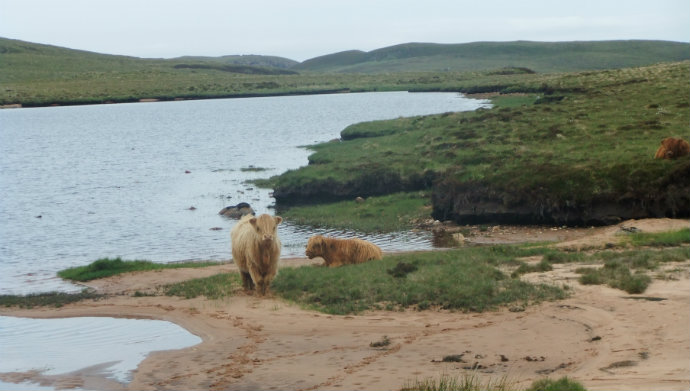 After an hour's brisk walking, I got my first glimpse of Sandwood Loch . 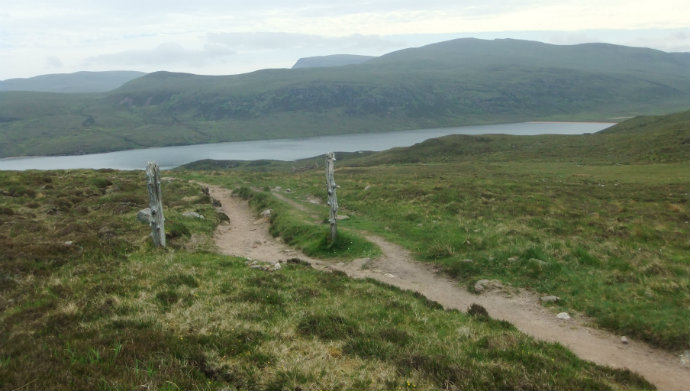 and a few steps further on Sandwood Bay came into view. 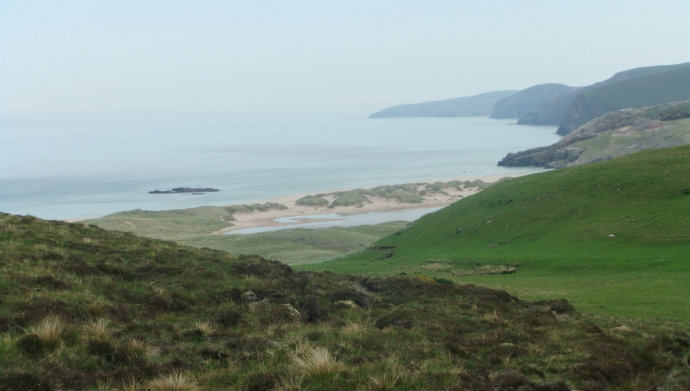 Sandwood Bay was somewhere I'd been hoping to visit for years, finally I'd made it.
By 1040 I was wandering through the dunes down to the beach. And what a beach, absolutely gorgeous. 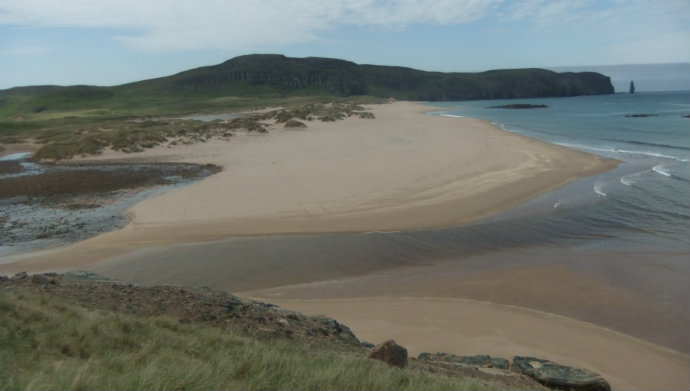 Sandwood Bay: Not a bad beach

And almost unbelievably, on such a lovely day, I had it all to myself. Any overnight campers had gone and I was alone in this magical place.
I made my way along the beach, which was harder work than it sounds, as i sank into the soft sand with every step. It was actually quite tiring!
It was no problem crossing the river at the north end of the beach, water levels were low. I scrambled up the hillside and aimed left towards the sea. 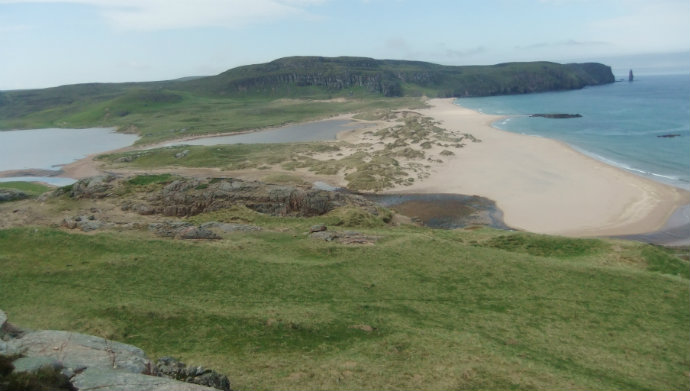 Sandwood Loch to left, Sandwood Bay and the Sea to the right

That was a mistake as there were a few inlets and smallish cliffs. Over to the right, a short distance, and uphill a bit was a small cairn. I headed for that. It had a wonderful vantage point overlooking the Bay to the south Lovely view over Sandwood Bay from the cairn

and offered good views to the North of the terrain i had to cross to get to the Cape. View north from the cairn

If you see the cairn as you approach the north end of the beach, I'd suggest you try and aim for it as you scramble up the slope above the river.
Stopped at the Cairn for a few minutes to savour the view over Sandwood Bay. If you haven't been to Sandwood Bay, then go, it's wonderful.
One last look over the Bay and it was time to leave the cairn behind, turn and head North. The Cape beckoned.
Initially the going wasn't too bad, the ground wasn't too boggy, and there were a few animal tracks that made the going relatively easy.
By 1125 - less than 15 minutes after leaving the cairn - I'd crossed over the stile in the photo below: 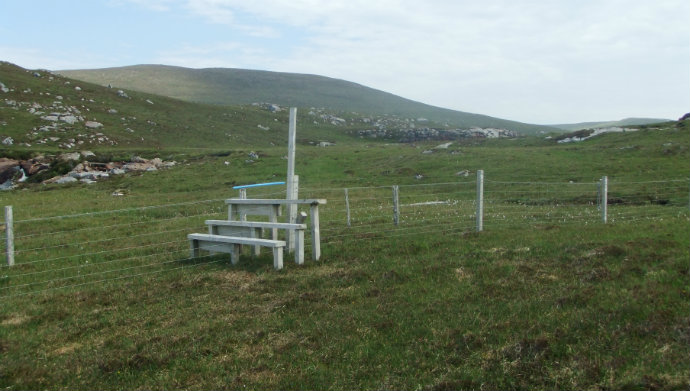 Stile was handy as the top strand of the fence was barbed wire. A few metres after crossing the fence, I crossed over the Strath Chailleach river. No problem crossing the river today, but I'd imagine this could be more challenging in wet weather. 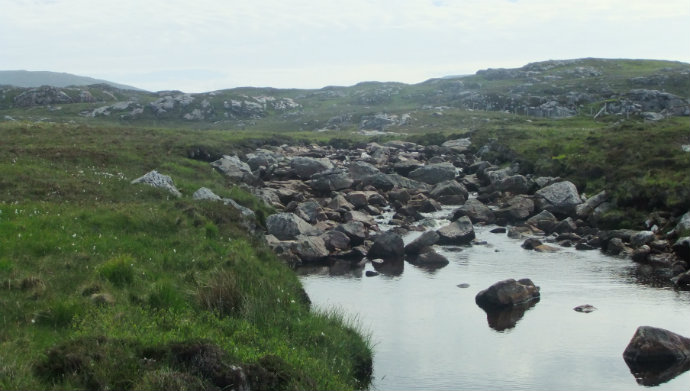 From here I headed slightly uphill in a north east direction, contouring round Cnoc a Gheodha Ruaidh, aiming for Loch a Gheodha Ruaidh. Given the excellent visibility this was easy enough even though by now there was no trace of any paths. The green grass by the Cairn had been replaced by rough moorland but to be fair it wasn't too boggy. Compared to Ben Klibreck which I'd climbed yesterday, this moor was dry! About 1155, I passed across the narrow strip of land between Loch a Gheodha Ruaidh and the small Loch lying a few metres to its North west
From here, with a bit of mist coming in off the sea, I headed slightly east of North, passing somewhere below and to the east of the 2 small lochans shown on the OS map at 246683.
From here, I could see down to the Kesaig river so it was a simple matter of heading down the slope towards the river. Where I crossed the river, it ran through a small gorge. 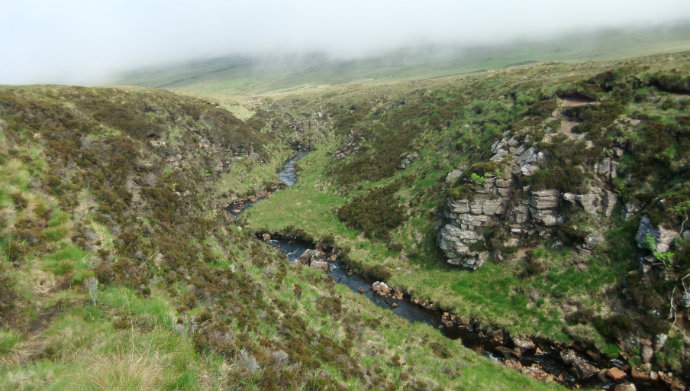 Across the river, and up and over the other side of the gorge, it was only a few minutes walk to the barbed wire fence that marks the army firing range. Easy enough to cross the fence, then it was uphill again aiming for the gap between Sithean na h-iolaireich and Cnoc a Ghiubhais.
This was made easier as i could see a couple ahead of me - the first people I had seen since leaving Blairmore - aiming in the same direction. 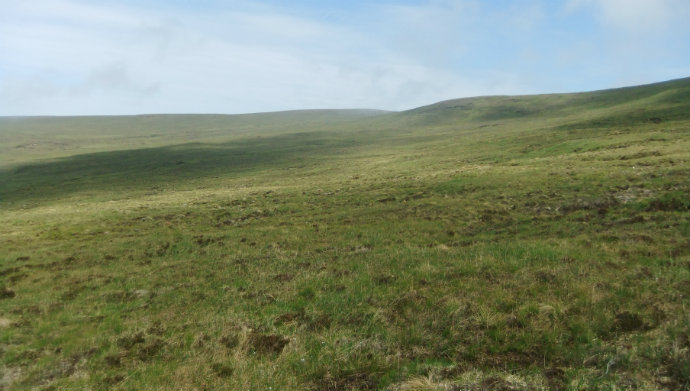 I soon caught up with them, a young couple from Forres. They were on the last day of the Cape Wrath Trail which they were completing in 14 days. I'm full of respect for anyone who completes that in one continuous walk.
Given they were carrying far heavier packs than me, I soon pushed ahead and after passing through the gap between Sithean na h-iolaireich and Cnoc a Ghiubhais, I was rewarded with my first "view" of the Cape, albeit it was partly covered in mist! 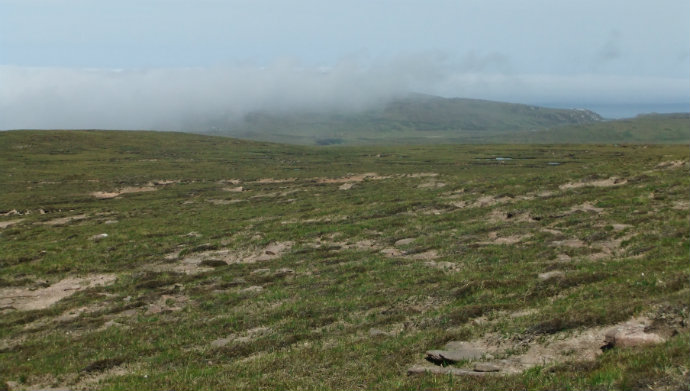 Mist or not, I could see the road in the distance so I dropped down and crossed over some fairly boggy land - to the east (right) of the deep gully holding the Allt na Clais Leobairnich - and was on the road by 1335. 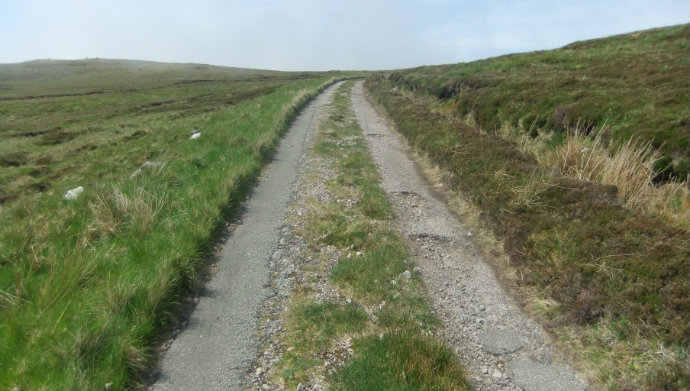 After the rough moorland I'd crossed since leaving Sandwood Bay, being on a dry road felt quite good. 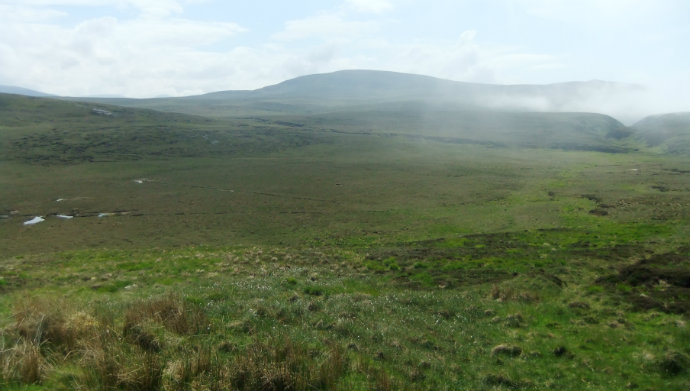 View from the road back across the moor I've just crossed

It was another 30 minutes walk along the road before I arrived at the lighthouse at 1405. 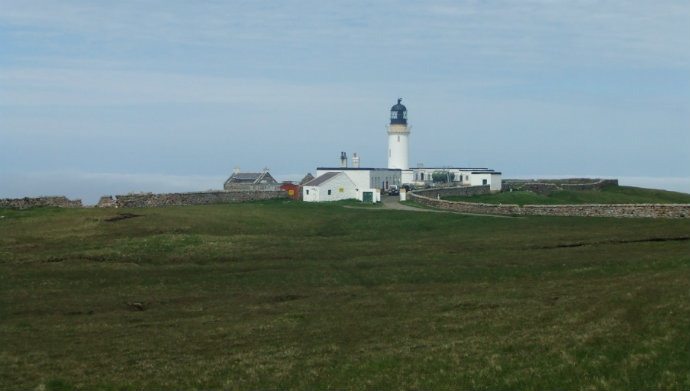 Mist has gone, Cape Wrath and the Lighthouse come into view

After posing for photos at the lighthouse it was into the Ozone Cafe for a cuppa and to see if they knew the time of the next bus back to the ferry across the Kyle of Durness. Next bus was due at 1415 which didn't allow me much time at the Cape. However, when the bus arrived, the driver advised that he would be doing another journey and expected to be back at the Cape in an hour. That was handy, left me time to enjoy my cuppa and wander about taking photos. Don't enjoy too many cuppas as there's no toilets at the Cape; if you gotta go, you gotta go naturelle.
My gast was well and truly flabbered when the guy in the Ozone Cafe told me I was only the 16th person to complete the Scottish National Trail. I duly signed the visitors book and purchased an Ozone Cafe T-Shirt. 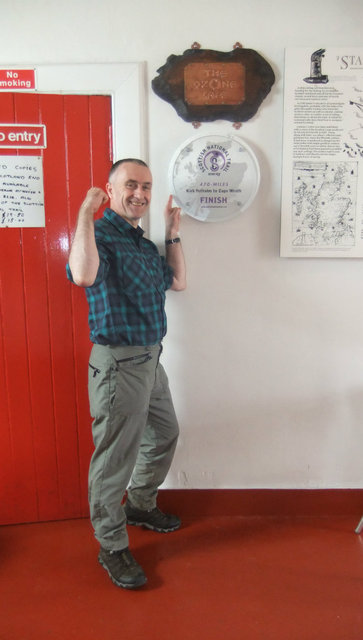 The young couple from Forres soon arrived so we sat and swapped stories about the Cape Wrath Trail while waiting for the bus.
1515, no bus; 1530, no bus; 1545, no bus; beginning to get a wee bit panicky as I didn't fancy a 4.5 hour walk, back across the moor, to Blairmore but at 1600 the bus rolled in. Myself, the couple from Forres and a group of 5 from France jumped aboard for the 11 mile journey to the ferry. To give you an indication of how poor the road is, that 11 miles took almost an hour! 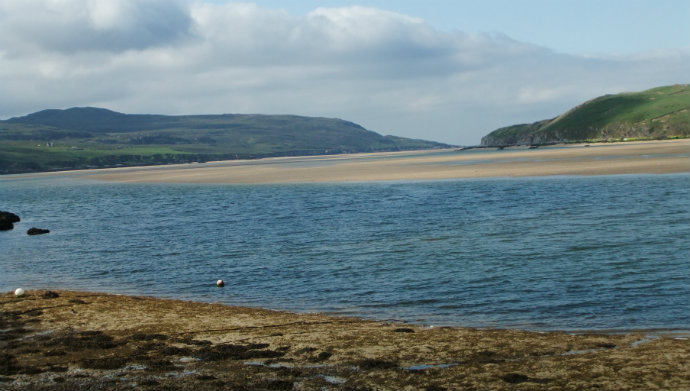 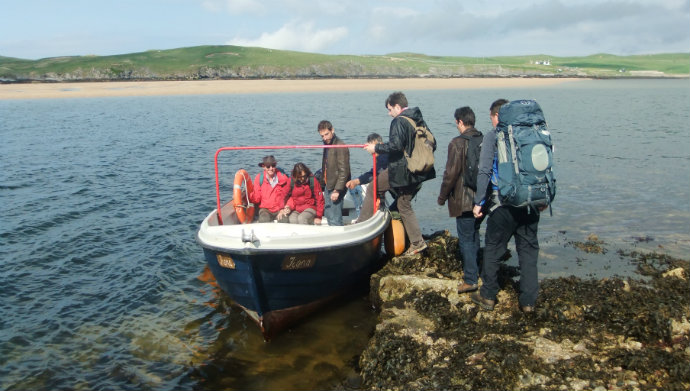 The ferry across the Kyle of Durness

and were safely back across the Kyle by 1715 and onto the main road at 1730 from where my good luck with lifts continued. Second vehicle to pass gave me a lift to Rhiconich, then a couple staying in the same B & B as me gave me a lift the final few miles to Blairmore where I collected my car.
And once back at the B & B a well deserved beer was consumed

Wow you have just finished the National Trail short before me.

Hi, I've just read your trip report on this last section of the Cape Wrath Trail as a fellow member on here said that if I followed the route on this site for last part to Cape Wrath the gps would go to the stiles on the MOD fence.... Reason I ask is that I am intending on doing the CWT with my dog and there is no chance of safely getting him over a stock fence with barbed wire on the top as in the pics I see of the MOD fence and wondered if you would be able to help with the following questions:

I believe there are two wire fences to cross in this section (is that correct?) and see that you have taken a photo of a stile on the first one, that should be no problem, but can you confirm if you found a stile on the second fence?

I added all you CWT POSTS while planning for the walk from Ft. William in May and June 2018. I hope to do the CWT after the TGO CHALLENGE FROM. mallaig to Montrose. Hopefully the old bones will not let me down. Your posts are superb and enlightening and helpful. Thanks again. Dará OhUiginn, Ottawa.