There are several different routes you can take to ascend Ben Klibreck but I chose what I believed to be the most direct, the approach, from the West, straight across the moor from the A836.
I was parked up in the lay-by at 537289, at the side of the A 836, and ready to go by 0910. Thatâ€™s the lay-by close to the waterfalls marked on the OS map, about 1km north of Vagastie Bridge and 1km west of the southern end of Loch Bad an Loch. 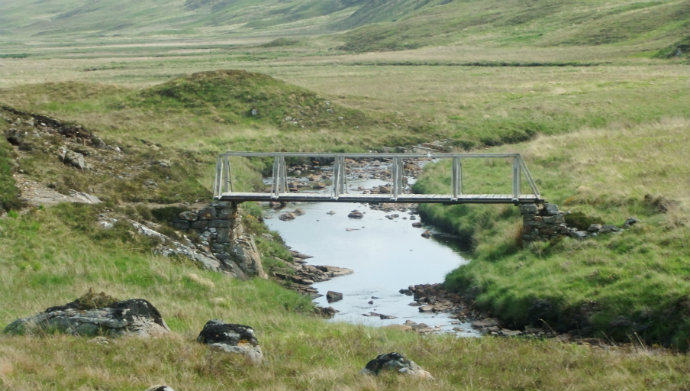 Plan was to cross the footbridge over the Vagastie then head East, passing to the south of Loch Bad an Loch and on across the moor towards the southern end of Loch nan Uan. From there, I would scramble up the escarpment and head to the summit of Ben Klibreck via Aâ€™ Chioch.
Once across the footbridge there was a faint path running on the right hand side (south side) of the river that empties out of Loch Bad an Loch. 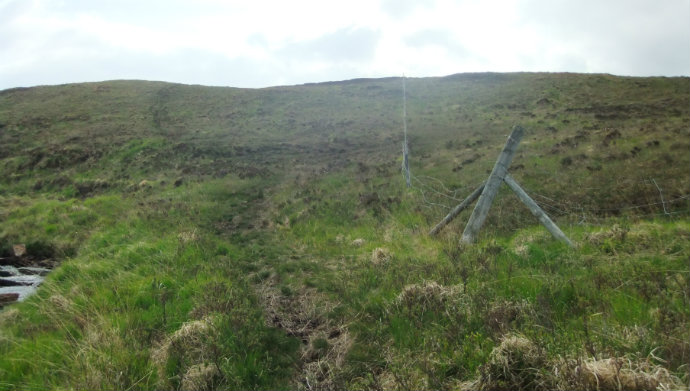 Easy going across the moor but in large sections it was boggy and damp underfoot. Ho hum. From the southern end of Loch Bad an Loch, I continued heading east towards the escarpment that runs down the western edge of Aâ€™Chioch. Visibility was good â€“ early morning mist had disappeared â€“ so crossing the pathless moor was no problem.
By 1005 I arrived at the southern end of Loch nan Uan. From here the escarpment looked very steep but some obvious routes up it were visible. I scrambled up one of the green â€˜avenuesâ€™ that ran vertically up in between the Heather. It eventually flattened out a little, at which point I headed diagonally up to the left before heading vertically up again, close to some rocks. Only went up a short distance here before I came across a faint path that led to a more obvious path that took me up to Aâ€™Chioch. Views from Aâ€™Chioch were tremendous, wonderful views back across the moor towards the road.
Simple task from Aâ€™Chioch of following the path before beginning to ascend Ben Klibreck.