With the weekend promising a band of high pressure and ensuring sunshine it seemed like a nice time to make the first outing to the Glencoe area of the year. The team comprising of myself and Craig decide to attack Curved Ridge on the North East face of Buachaille Etive Mor on the corner of Glencoe and Glen Etive. 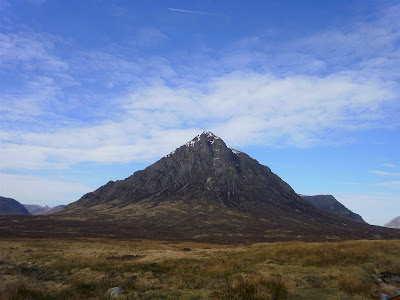 Curved Ridge was first ascended on July 1896 by G. B. Gibbs, and since then has been a popular route to the summit of Stob Dearg. The following picture I have borrowed from the Scottish Mountaineering Club Journal Volume 5 Number 5, May 1899 shows several of the common routes which had been documented at the time. Curved ridge is shown and can be compared to a closer photo of the NE face. 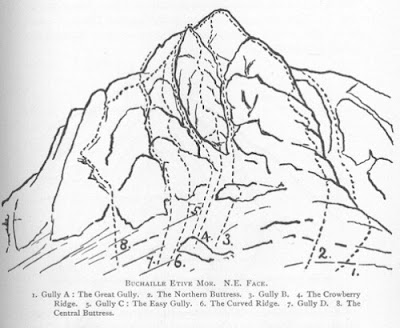 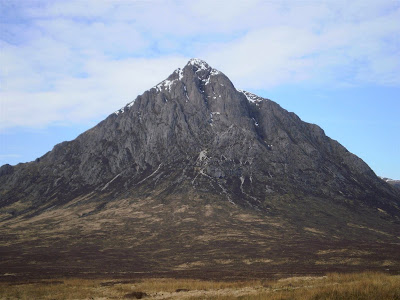 The two of us left at 8am and enjoyed a nice drive up past Loch Lomond, where the shores were starting to busy with fishers and picknickers, and others who planned to spend a nice sunny day on the waterside. After some more driving and breakfast at Tyndrum we were passing the Kingshouse and nearly at our destination at the Lagangarbh hut. 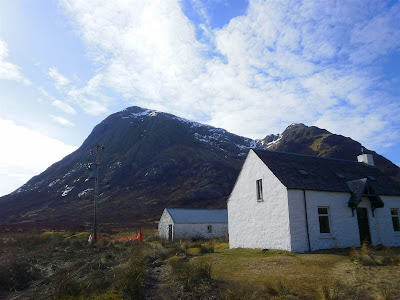 After some discussion about the need for crampons and ice axes we decided to take them to the disadvantage of the extra weight in the searing sunshine as there is almost certainly still snow cover on the top. Trying to keep as light as possible and knowing that the weather is going to hold for a few days we dumped our waterproofs and heavier gloves. From Lagangarbh hut we take the path which serves as the "tourist path" up the Coire na Tulaich, although the Coire itself is not without its dangers having been the scene of several accidents and fatalities over the years. Before getting to the foot of the Coire, the path forks off to the left and skirts the base of the mountain to the NE face.

Craig looks at the face and is sceptical about us getting up them and I assure him the ridge will take us up without much difficulty. 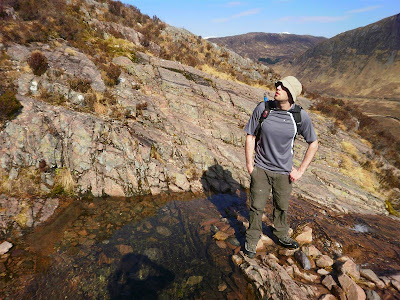 We are both very hot now in the sunshine by the time we reach the Waterslide Slab and I think it would be great to just jump under the water and cool down. I am labouring pretty hard under the heat so I decide to dump some weight and pour out my flask of lunch tea and stick with my water supply. 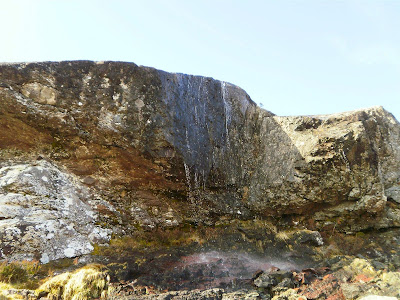 From the Waterslide Slab we make our way up towards Crowberry Basin which sits at the bottom of the similarly named Crowberry Ridge. We cross a lot of loose scree which goes sliding and bouncing everywhere and feels like we make more downward progress than upward.

On reaching Crowberry Basin we climb up to the left and start moving up the ridge. At one point we climbed up too much to the left of the butress and find no usable holds so descended a little and then skirted more to the right and the tell tale sign of crampon scratches tells us that traffic comes this way so we commit and move onwards and upwards. The views down and across Rannoch Moor reminds of us of how exposed we are and make us happy this is a nice weather day. 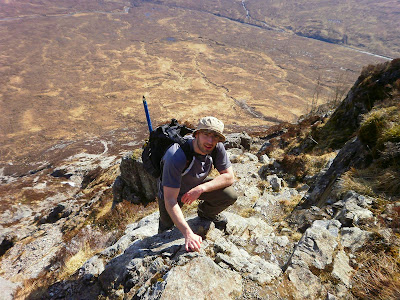 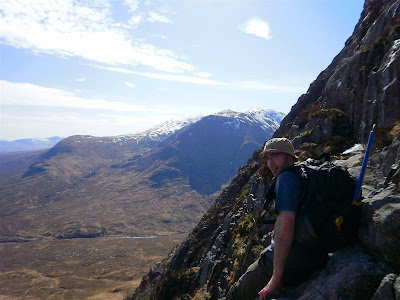 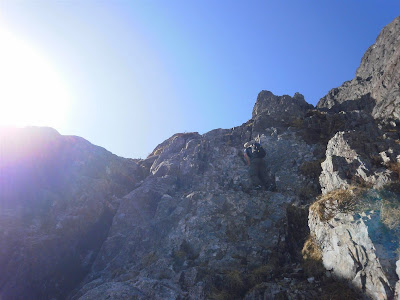 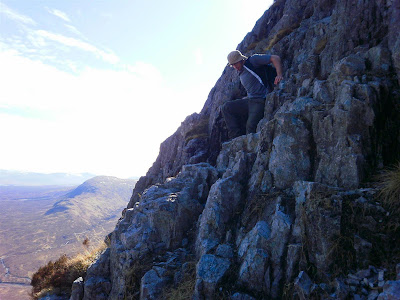 On moving up the ridge we can get a great view of the Rannoch Wall, which is the scene of some summer rock climbing. Routes here were put up by legends such as Himalayan and Alpine climbers such Chris Bonington and Hamish MacInnes. Moving past the wall we approach the Crux of the ridge which is a wall which appears to be devoid of any apparent holds. The dry rock makes this much easier than if they were wet. We managed to get to the top where a small cairn has been built to mark the end of the ridge. We stop for a break here to enjoy the views onto Rannoch Moor and beyond before heading to the summit. 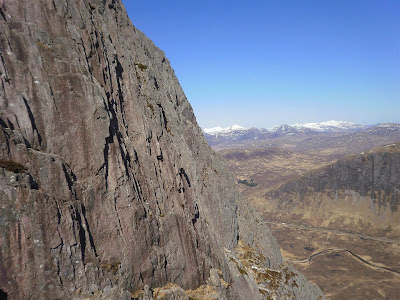 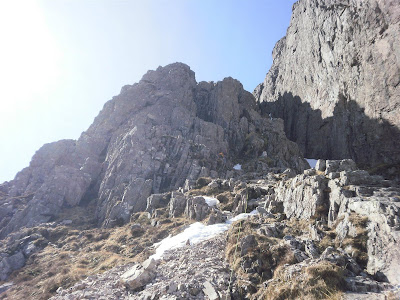 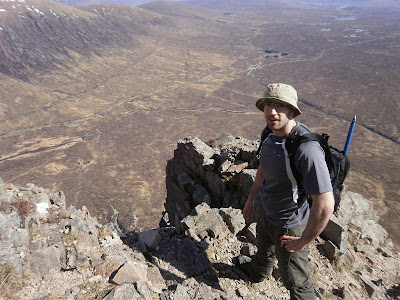 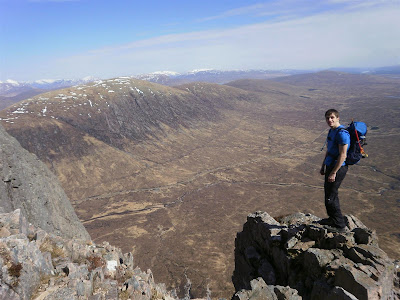 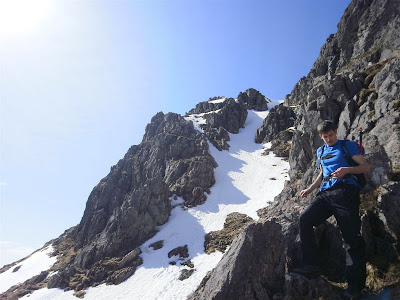 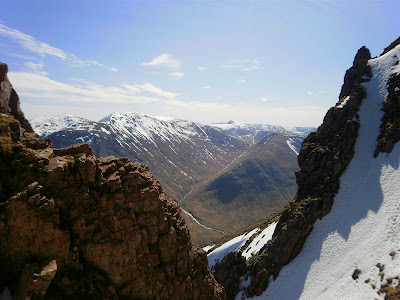 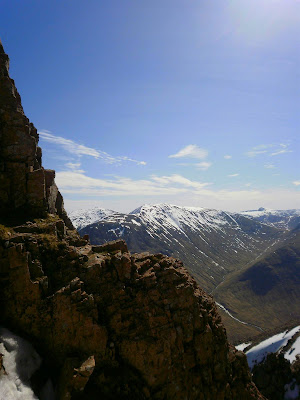 After a small refreshment we move onwards to get to the summit, from the foot of Crowberry tower there are a few different visible routes, but we decide on the small gully behind the tower which takes us to the top of Crowberry gully which runs down the other side of Crowberry Ridge to the basin. Some final climbing over some tricky icey rocks brings us to the final summit slope. The snow is quite soft and loose under us with a big drop behind us so we carefully pick up with our axes and top out to the summit in beautiful sunshine. 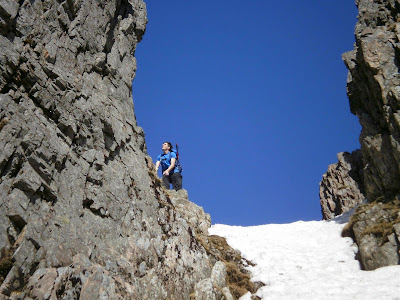 This is the first time Craig has had a view upon reaching the top in all the times he has came out with me. The views down Glencoe, Glen Etive, to Ben Nevis and beyond and also to the south is brilliant. 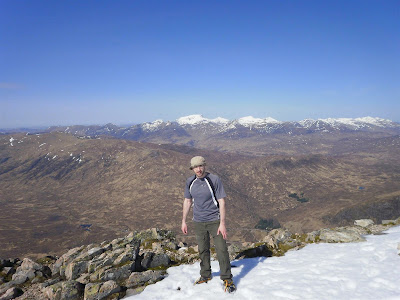 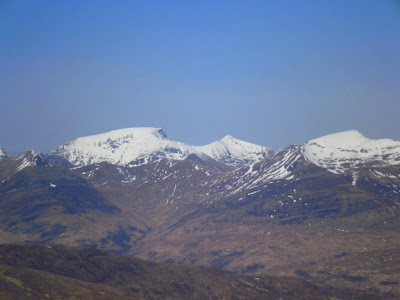 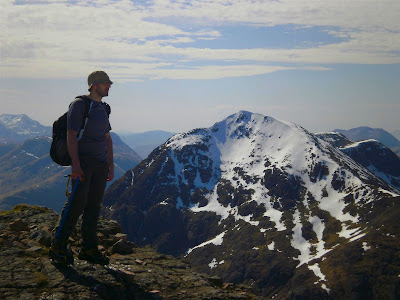 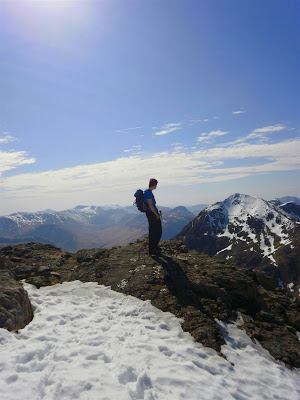 Having completed our task for the day, and had a brilliant ridge climb in glorious weather we drop down to the bealach and contemplate walking on to the other summits, but decide that we are absolutely starving and can always do that some other time, and instead put our minds to the task of getting back down again. The quickest way back down for us is down the afore mentioned tourist route, but this is not particularly easy as the Coire headwall is steep.

We face in and kick steps back down the slope using our axes. A party are just in front of us doing the same. After getting down steepest part of the slope we move off the side onto a rib of rock which leads us down onto the scree below.

We move partly down the scree but this sits above the snow gully and the loose rock starts sliding the moving about everywhere and rocks fall onto the snow in the gully and start hurtling down towards the other party. Luckily the rocks come to a stop on a level part of the snow. We make the decision to move across to the gully again and pick down the snow so as not to launch a landslide down upon the other people. 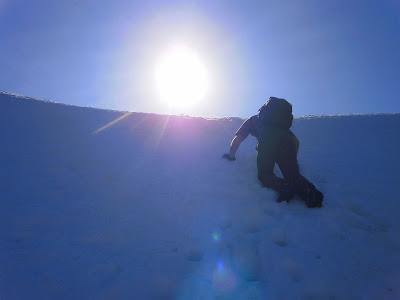 Once on the gully I can not miss the chance for some Glissading, and launch myself down using my axe to control my speed of slide. Craig follows suit and somehow manages to loose his balance. He spins out of control and looses his axe and is thrown into the scree and rock at the side of the gully and comes to a halt. This serves as a stark reminder that winter dangers are not fully out of the way yet. Craig is badly grazed and bruised but has not hurt his head or sustained any other injury, and luckily he never slid down the full length of the gully where the inabilty to stop himself could have resulted in some worse injuries. 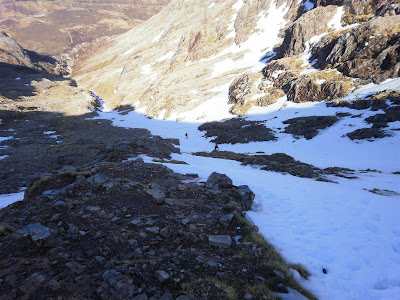 We made the rest of the way back down the Coire admiring the Glacial features on the rocks, and descend back down towards the hut and back out into brilliant sunshine. 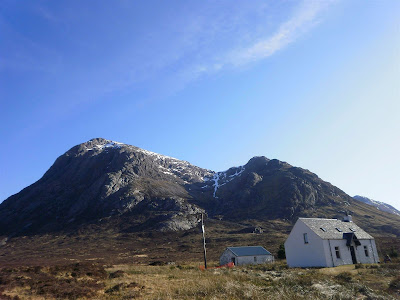 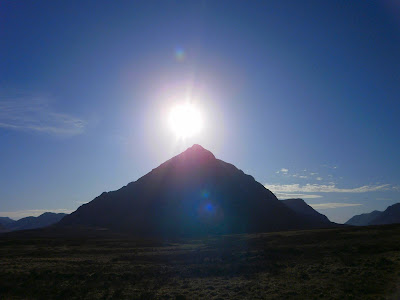 Injury aside, Craig has had his best day out yet. I have had a brilliant day as well. In true Glencoe mountaineering fashion we finish the day off with dinner and a drink at the Kingshouse before making the long journey back home again to the concrete jungle of the central belt.

Nice report Milesy.
Lovely pictures but it looks extremely steep and dangerous. Are you a crazy man

Sliding down the snow looks like fun and I would be only to happy to partake, if there was a nice bowl at the bottom, not a huge cliff

Gorgeous - what a weekend it was

Must try one of these glencoe scrambles sometime