My plan is to hit 50 this year (that's 50 Munros...I've already hit the 50 year mark...a long time ago!) so I've been looking at walks that take in several Munros, rather than just one, I guess then it was just a matter of time before I decided to to go for Beinn a'Ghlo and its 3 summits!
We (that's Malcolm, Michael, Neil and Sam, and me obviously!) met at the car park (of sorts) next to the wooded area at Loch Moraig, we got ready, and set off at 9.45. Sam had been applying sunscreen, but as it wasn't particularly sunny, with thick clouds being the forecast for the day and light showers coming in later in the afternoon,I declined his offer, something I was to regret later!
We followed the usual track up to the path which goes off to the left, passes the hut, and then makes its way over the boggy area onto the eroded path up Carn Liath. There were a few other walkers on the path that morning and with some we took turns passing each other, others disappeared into the distance and were never seen again! The summit of Carn Liath was reached in just under two hours, not the fastest I guessed, but we were happy with that! A quick bite to eat and we were off again, following the good path along the broad ridge and down to Coire Crom, I hadn't expected as much of a drop at this point and so was dreading the climb up to Braigh Coire Chruinn-bhalgain, but I have to say it wasn't too bad, and I was surprised to find, at the summit, that it had only taken us an hour and a quarter from Carn Liath.
Visibility was fine so we had no problem finding the path down to the bealach, and were soon on our way up the final Munro, Carn nan Gabhar, we reached the plateau, and made our way over the boulders, passing the first huge cairn, I suppose it's actually a normal cairn on top of a rocky outcrop, making it look huge, but anyway......we passed it, and then the trig point, and still jumping from boulder to boulder, we reached the second cairn at the north end, and ticked off #3 for the day! A quick bite, a drink of juice, a few photos and we set off back down, I really wasn't looking forward to this bit as I'd read several reports which told of how boggy this track was and I HATE bog!!!
Once we returned to the bealach, we descended to the south and followed the path along the burn, crossing it and re-crossing it, and sure enough there were boggy/peaty parts to it but so far it wasn't too bad, I was even starting to quite enjoy myself...then the rain started...then it got heavier!!! My enjoyment was soon washed away by the downpour which soaked through my (not very waterproof!) jacket, the boggy areas we reached further along the path were indeed very boggy, and although they were bypassed relatively easily, I did trip/slip at one point, the weight of my rucksack throwing me forward and I landed on the path and rolled over into heather, no harm done apart from a further descent into p*ssedoffness! We made our way around Beinn Bheag, and then Carn Liath, FINALLY reaching the track! "YAY!" I thought, "we're almost back at the cars", then I saw the hut a...w...a...y in the distance, and my heart sank, so on we trudged, it was a good hour later we reached the cars, soaked through (the rain hadn't really let up!) but after a quick change of clothes and footwear (ALWAYS makes a difference!) , a cup of coffee, a good few curses and expletives about that final walk back, and we all agreed we'd had a great time!!
The paths up to the summits were excellent, if eroded in parts, we'd had quite good views all the way, we weren't held up by crowds of other walkers, and the weather for the best part of the day was good, it was only the return path and the accompanying rain which put a damper (literally!) on the day...and the fact that I got really sunburned...surprising as there wasn't really any sunshine, the clouds obscured it for most of the day...but a lesson learned!
Some pics of the day.... Mallard drake at the Spar in Blair Atholl. Carn Liath from the car park. The track from the car park, Carn Liath up ahead. 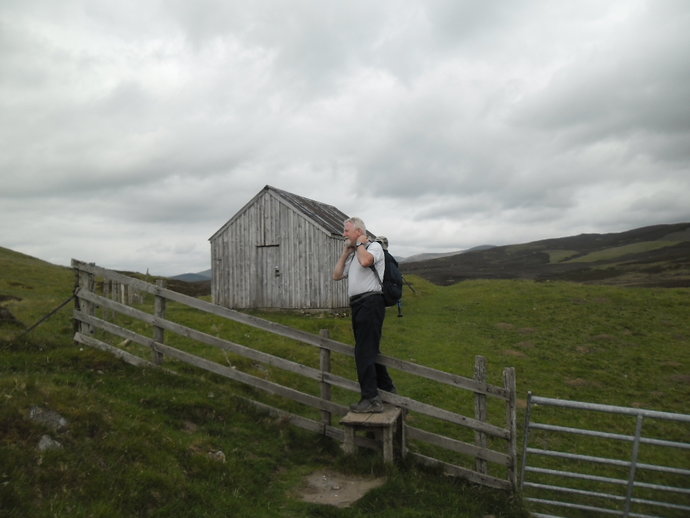 Michael and the hut. 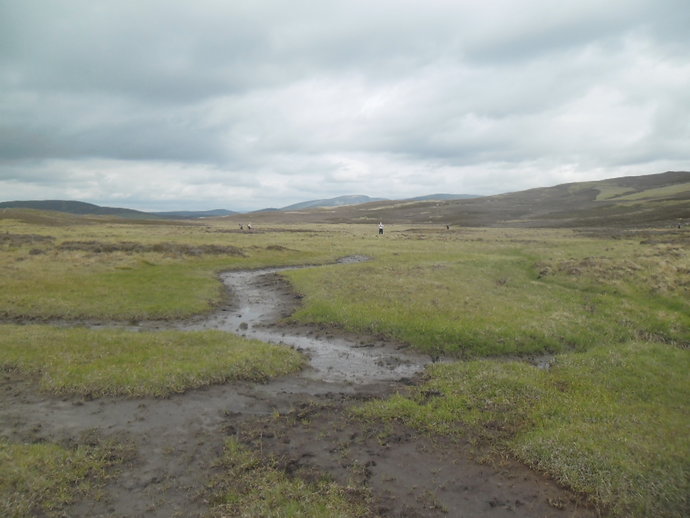 The boggy start to the path, this took a wee bit of thought to cross without getting wet feet! Carn Liath and the path to the top! Looking back down the path. Summit selfie, with walking buddies behind! 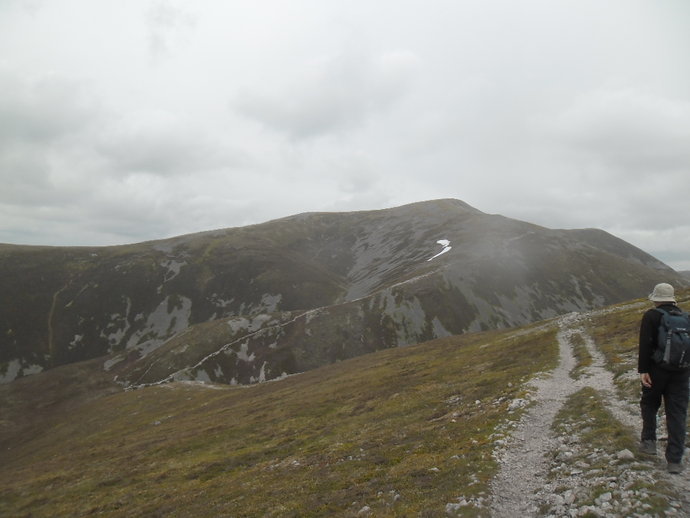 Crossing Beinn Mhaol, before dropping to Coire Crom, the path up BCCB can be seen on the other side. Braigh Coire Chruinn-bhalgain on the left and Carn nan Gabhar on the right, at the back. Michael having a breather on the path. 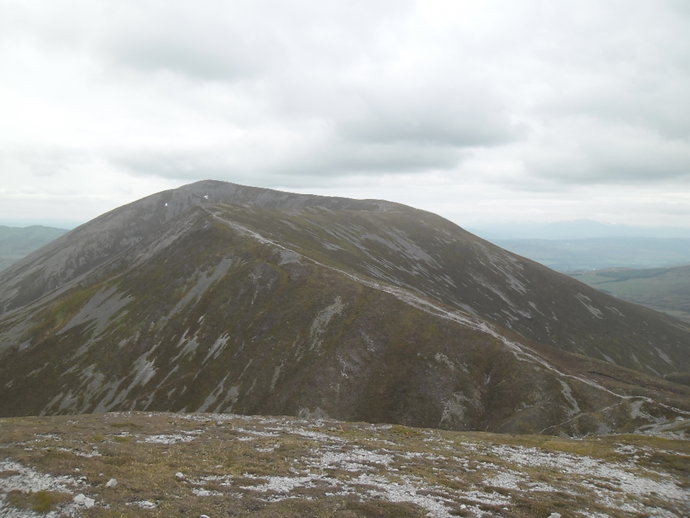 Looking back to Carn Liath from BCCB. Airgiod Bheinn, we swithered about a descent by this route but decided against it as it looked VERY steep! Looking down on the burn that we followed on our return, Beinn Bheag looking quite wee from up here! 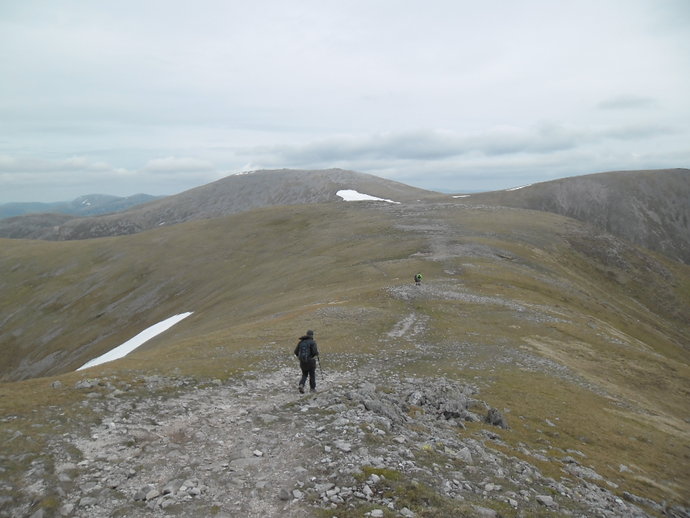 Heading down to the bealach before the climb up Carn nan Gabhar. 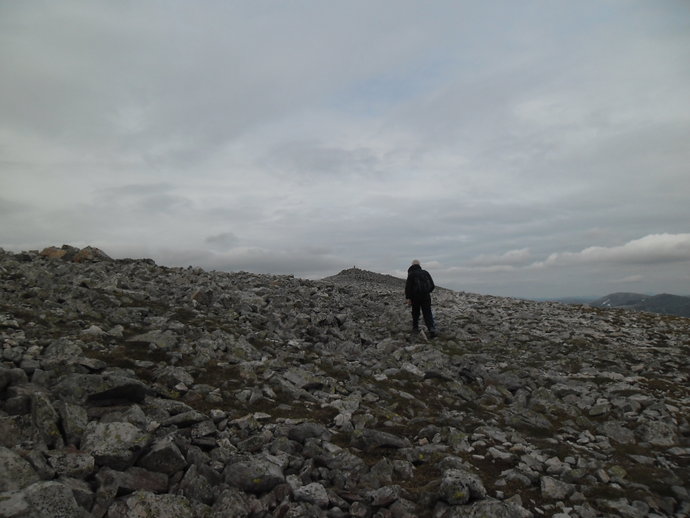 Michael making his way across the bouldery plateau. The trig point in the distance. 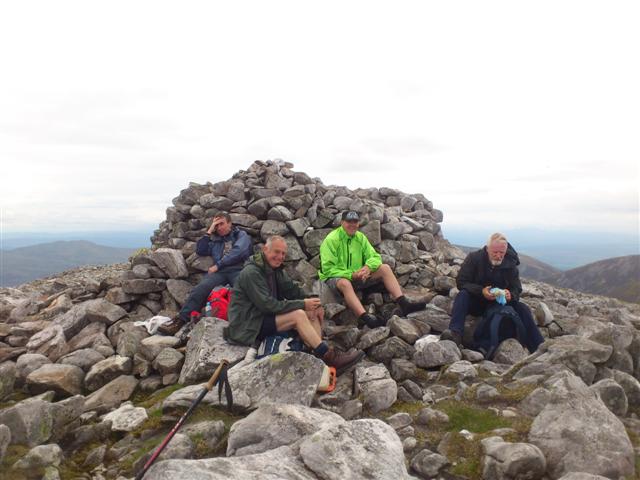 Third summit of the day! 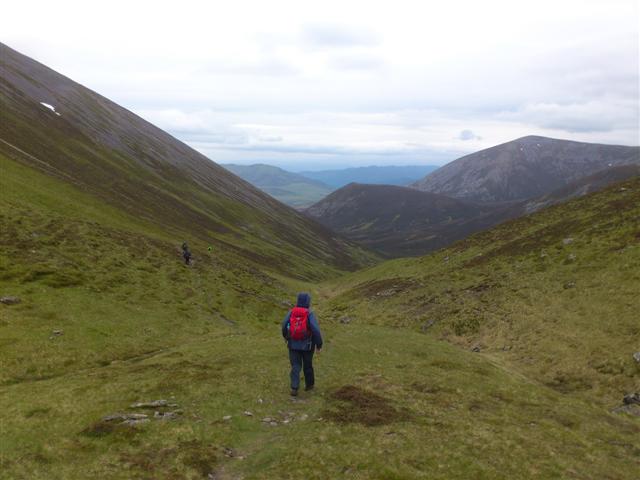 The start of the slog back to the cars, at Bealach an Fhiodha. This was characteristic of the path back, lots of bog/peat..this bit wasn't too bad, there was worse to come! 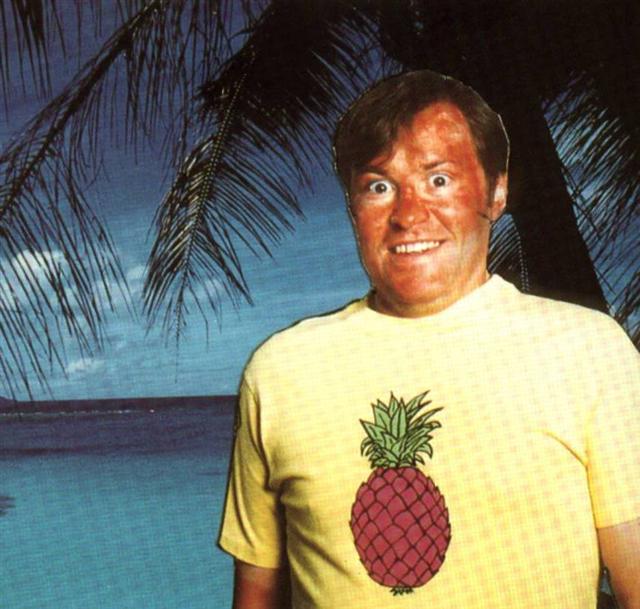 How I looked at the end of the day, apart from the pineapple t-shirt, and the brown hair! DEFINITELY not the tropical background either!

Re: A long slog on Beinn a'Ghlo

Enjoyable read, sounds like you had 'typical' Scottish weather

As I have stated before the walk back to the car is the hardest bit, seems never ending

Re: A long slog on Beinn a'Ghlo

Fife Flyer wrote:As I have stated before the walk back to the car is the hardest bit, seems never ending

That's why I prefer to go the other way round (and go up Airgod Bheinn)!