The plan for this year's Big Weekend walk was in the making for almost a year and was due to be an epic - 11 munros and 1 corbett over the 4 days. Here's the original plan:

There are others on this site who've tackled the same 11/ 12 hills in shorter times and using different routes but this was mine. It was also to be a solo wild camp for the 4 days and there were many who said I was crazy and what would happen if....

Crazy? Absolutely. I had some "what if...." contingencies but the whole Ben Alder area is pretty poor for mobile reception but still reasonably busy with other walkers so - provided I didn't have a problem away from the main routes - I ought to be able to let someone else know.

This was a postponed walk from the end of July - I had a small op just about then and was off walking for a couple of weeks. So it was with a fair amount of excitement that I packed my backpack (several times) and became more alarmed about how heavy it was getting but everything was essential of course. It would of course get lighter each day as the food was consumed.

The train journey from Glasgow to Westerton was weird - only passenger on the train - and when I was papped off at Westerton it felt like I'd just been on the "Night Bus" from Harry Potter. It was odd standing on the platform at 5.45am with no other signs of life till a taxi pulled up and two Scotrail employees got out, one of whom was the conductor for my train.

The diesel emerged out of the night and came to a silent stop. When I got into my coach and saw someone out of their seat, I said a merry "Hi" in a fairly loud friendly kind of voice and immediately realised that this was a coach full of sleeping people! I quickly and as quietly as I could manage made my way to my seat and sat. Dawn broke just a few minutes after that and the great adventure for 2014 had begun.

3 hours seems like a long time to get to Corrour from Glasgow - at least in terms of the crow flies distance but as you can't get there any other way, 3 hours is how long it takes. The forecast for today was very low cloud and rain so it was no surprise to find that was my welcome at the most remote station in Scotland. Abandoned in the middle of nowhere! 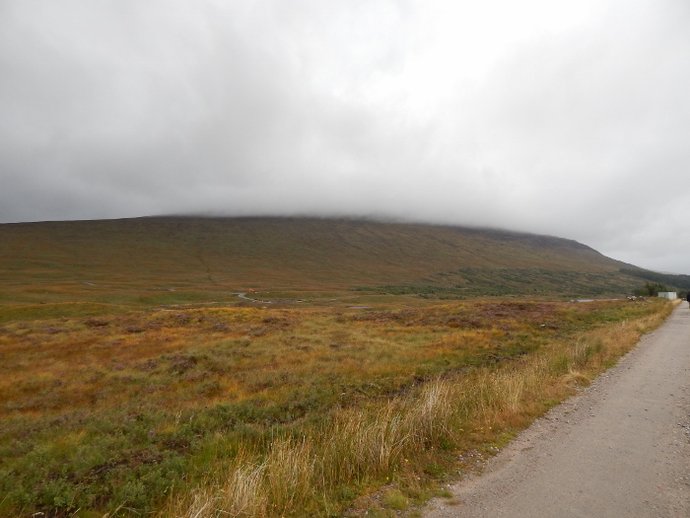 Back pack on and off I went at a fair pace. As I approached the foot of BnL I realised that I was in for a muddy climb and donned my gaiters. It WAS a muddy wet clamber up the side of the hill Looking back down the muddy hillside to Loch Ossian

but not in any way difficult although with a 25kgs pack it seemed never ending. A proper stony path appeared near the top of the hill and I met my only other human being for the day (who had got the first train from Fort William and was now heading back North on the next train (presumably about 11ish).

It was to be a clag bound day and so I spent only a little time at the top but I was ahead of schedule at this point. I had earlier on been "led" off the path by a wind shelter which I thought might be the summit but it wasn't and then rather than go back down to the path I'd been on, headed across the top of the hill to the real summit, losing my 750ml water bottle in the process. At the top of BnL

With good compass bearings I was quite relaxed about the descent down the North East ridge of the mountain - if nothing else, going down and keeping left was bound to get me where I was going!. Paths came and went and periodically the high winds blew all of the cloud away giving a fleeting glimpse of the hillside ahead. Love it when that happens. Eventually emerging from the cloud, a glimpse of the flatland below It should have taken me less time than it did but by the time I reached the river I was about 35-45 minutes behind schedule. The river was fast flowing and deep and if I'd been with someone else I might have chanced a spot that looked not too bad but it was going to be tricky getting down to it and with my heavy pack, I decided that the better part of sense here was to walk a bit further on and use the bridge, adding more time and distance which I could now ill afford if I was to complete todays three munros. I stopped for some pot noodle which tasted odd - nothing at all like curry as it said on the bag I had decanted it into. Turned out it was Chicken and Mushroom! 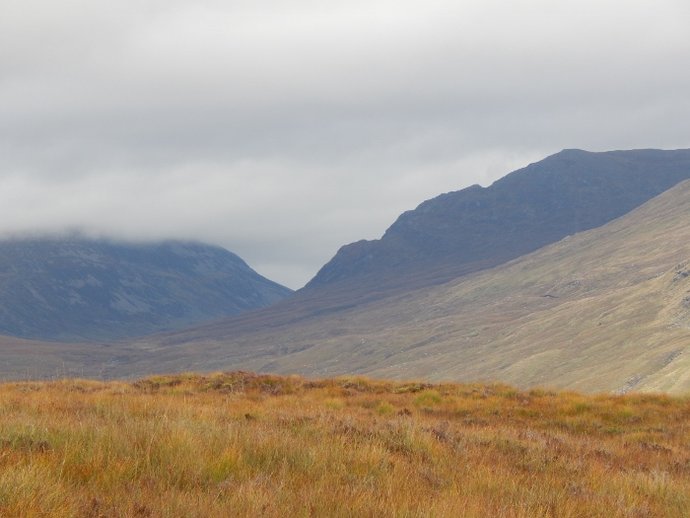 Looking over to (I think) the back of Aonach beag

The route across the foot of Glas Choire was easy enough just tussocky/ heathery and full of pools of water and peat hags and when I reached the Allt got my first drink of cold water since before BnL. It was amazing! My eye was drawn upwards to the Corrie rim and mentally began to think I'd never make it up there with this pack. I judged it was another hour at least and it was by now about 3/3.30. After a quick consultation with my route timings I decided to camp here for the night and carry on without my pack to get the two munros that lay ahead of me. My campsite could have been better: it was beside the river (tick); it was in sheltered spot beneath just down from the main corrie floor (tick); it was not very flat - in fact it sloped downwards (hmm?)

In a few minutes though the tent was up and everything stowed inside except the camera and my now expanded 2 litre bottle of water [tip: you can crush a normal 2 litre mineral plastic water bottle and re-inflate it to about 80% by blowing into it] Off I went and another decision: up and across the rim of the corrie or up Sron Ruadh which looked much steeper from here but much shorter. I decided for the short term pain and headed off piste and straight up. A few brown birds were encountered about half way up. but it had still taken me an hour or so. I was met with very strong westerly winds which felt like 40mph which helpfully blew the cloud off Chno Dearg. I was calculating the whole time - can I still fit in Stob Coire Sgriodan (SCS) tonight given that sunset is 8.15? I'd be heading into 40mph winds in clag so all of that would certainly slow me down. In the interests of safety I decided to forego the pleasureof SCS. Of course as I arrived at the cairn, the cloud returned with a vengeance beore I headed back downhill. I got back to the tent about 7.30 after a minor slip on the way down - very steep and wet rocks and grass don't make good climbing pals!

As I was getting ready for bed I was sure I heard voices pass me but if it were other humans, I wasn't sure where they were heading for the night unless on the long walk back to the youth hostel which would be a good two to three hours away.

The morning was wonderful: cool but bright and the usual white cloud rising from the lochs and glens. I was up at 5.30 and due to start walking at 6.30 but I guess I was enjoying myself too much and didnt get packed up and away till 7.30 (cleaning burnt on porage off the cooking dish was hard going!). BnL was cloud free this morning. 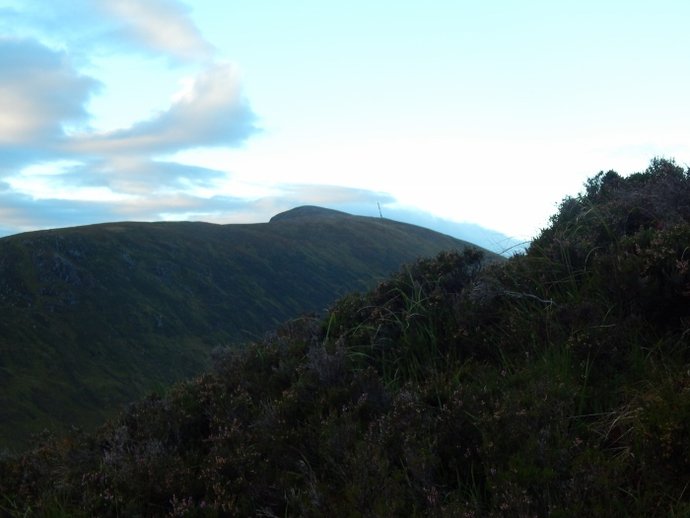 and the rest of the panorama was equally pleasant to look at: Just about 10 minutes into the new day, I slipped on some wet grass or mud or something and ended up with my left foot and left leg doubled up underneath me. I lay there sprawled on top of my pack for a minute or so while I figure out what had happened and began to fear the worst - a broken ankle.

I unfolded the bits of my body and gently tested bending my ankle inside my boot: it seemed OK, if a little sore. There was no sharp pain and nothing I couldn't handle so I got up and carried on over the moorland for the second time going more slowly and gingerly moving my left foot from one obstacle to another, fearful of another slip.

It took me about an hour to reach the bridge where I stopped for aspirin and a drink. I realised that the adventure was over at this stage. The injury, while I could cope with it, was going to slow my speed right down and for the next 3 days to work, I needed to be at top speed. There was also the likelihood of another slip and more damage but perhaps this time further from rescue. I worked out I was about 12k away from the station and that it represented my best hope as there was a restaurant there, and a youth hostel and so even if I didnt get a train, I could get food and a bed potentially.

Meantime, I was attacked by midges - hundreds upon hundreds of them and I had ditched the midge spray from the packing, thinking, it'll be too cold and wet I'll not need this.

Then I started the long slow walk to the station - it took me almost 4 hours with virtually no stops since stopping meant more midges and with a train potentially at 12.30 I had no time to spare. I randomly thought that I MIGHT have met a van or car belonging to the estate but I didn't until I was about 1k from the station by which time I was so amazed that there actually was a vehicle I never bothered to hitch a lift! This was followed by a motor bike, and a dog which seemed to have no one with it.

I got to the station with 15 minutes to spare, just long enough to get my train ticket out of my backpack grab some train-snacks out of my food store and stow my walking poles. On the way back down on the train, my wife organised assistance at Glasgow Queen Street (Thanks Scotrail) who wheelchaired me to the car and a guy helped carry my backpack. Hospital diagnosis? Bad sprain. Dead Lucky!!!!