It’s been quite some time since Carol and I had ventured out for a hike of any description, due to my recent illness. Having recently missed out on a Walk Highlands meet in the Lake District due to being admitted to hospital, I was hopeful that the Gods would be smiling on me on my return to the Highlands and that my limited exercise on the Common near home dodging the bullets on the military range would be sufficient for me to achieve some of my objectives.
The following is a summary of our holiday based in Kenmore near Aberfeldy on Loch Tay which is a beautiful location and an ideal base for walking in the Scottish hills.

The first day was the one which of course was a concern with the thought of my old body failing me; however with lots of encouragement from Carol we set off towards Pitlochry and parked the car as per WH advice on the A924 Moulin road just past the Hotel.
A pleasant walk was had which initially is through woodland eventually leading to open moorland with the face of Ben Vrackie in the distance. Loch a’ Choire is pleasant place to have a picnic; the reflection of Ben Vrackie in the water makes a pretty postcard picture. The route of assent is clear enough and although steep in places I managed to make the top without any difficulty. Although the views were a little hazy, I was well satisfied with the first serious hike for over 6 Months and was already planning the next walk in my head for later in the week. The weather forecast was not looking good in the West and in the North, the best of the weather was indeed in the Loch Tay area. We chose to travel up towards the Lochan na Lairige, and bag the two Munros West of Ben Lawers. We parked at the side of the road just north of the Lochan which is clearly marked with a large cairn above the roadside.
I decided to walk towards Meall a’Choire Leith first and get the bog and swamp hoping over early in the hike. There are little signs of paths and often found myself following a sheep trod, eventually we made the Intake at Alt Gleann Da-Eig and then headed up the steep side of the hill. It is steep too!!
After finally reaching the path between the Munro’s and plenty of scornful looks from Carol following that tough assent, the track gentley leads to the summit of Meall a’Choire Leith. The way towards our next Munro looked quite clear and looked interesting over snow to the summit, however the Lawers group of hills were covered in clag at this stage so not much of a view yet.
Meall Corranaich was reached with cloud lifting slowly and finally clearing to give a clear view of Ben Lawers and Beinn Glhas which was my first ever Munro. It would be easy to take a wrong turn here on decent and could you could find yourself heading for the old visitor centre car park and then a long walk on the road. Heading in a rough direction of Meall nan Tarmachan to decend which was delightful way to return with good views and minimal bog and swamp to contend with. Another great day and I appeared to be holding up ok. Bogs and Meall a' Choire Leith Intake with Meall nan Tarmachan behind 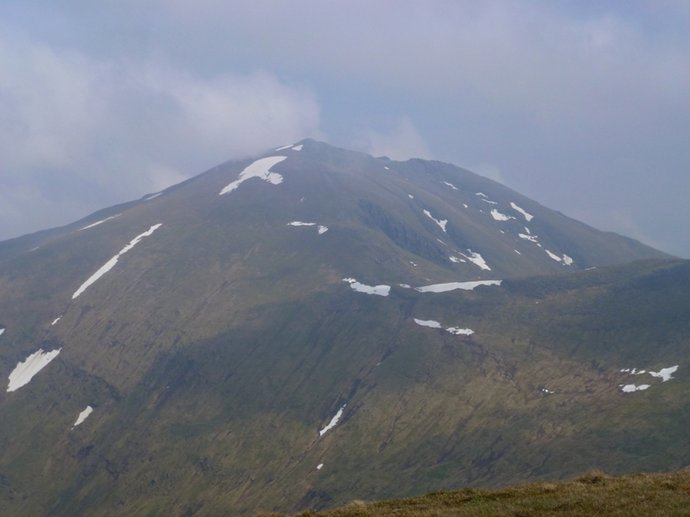 Another pleasant walk was had today and a further day of the weather Gods being appreciative of our week in the Highlands and allowing us to venture in this beautiful part of the world.
Parking at the Balsporran Cottages a clear path leads up the slopes of Geal Charn, eventually to a great cuppa stop at the Cairns. The view towards the summit was still covered in cloud although clearing and looked promising. The view below was not so pleasant; a massive construction project is being undertaken with a creeping army of steel pylons making their unnatural way along the A9.
The view at the summit was clear and a little from the summit walk provided us with a wonderful panorama of Ben Alder and Loch Ericht…awesome and so far the best moment of the week.
A’ Mharconaich is easily reached with a clear path down into the bealach before climbing up to the summit. The other two hills will have to wait for another day. Looking Cloudy up there A9 and the Pylons 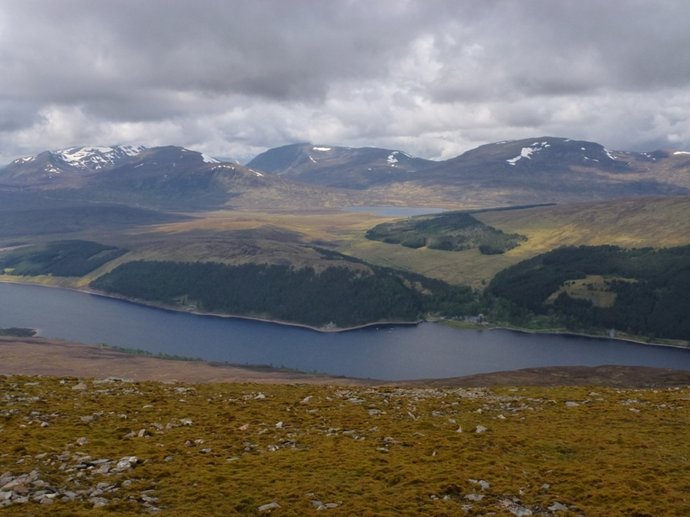 The last day of our holidays and we decided to head up the A82 towards Glen Coe. The objective today was the smaller of the Buachallies and its two Munro’s.
A good path leads up the hill towards the Mam Buidhe which lies at the base of Stob Coire Raineach on reaching this point we headed towards Stob Dubh climbing steadily and carefully over a snow field until the summit was in view.
An impressive sight was had indeed and before we walked up the ridge it was time to admire the views of Bidean nam Bian and Stob Coire Sgreamhach both looking wonderful with their coating of winter snow still clinging to the tops. I have to be honest the last climb to the summit looked a little scary from here and I was not sure wether it would be out of my comfort zone…. Carol just got up and set off and said come on then, so I just followed wagging my tail behind me.
The ridge looks harder than what it is and the summit was achieved in no time at all. The wander to the end and the view of Loch Etive was again stunning. We did not venture up to the top of Stob Coire Raineach as we were feeling very tired and had to travel back home the next day…maybe next time. Aonach Eagach...too scary for me!! Fantastic,,whistlestop tour and you certainly crammed them in there. Well done

Enjoyed reading your report, you were lucky with the weather

When I saw the list of hills you had climbed I thought at first you had done them all on one day, even superman would be struggling

Glad you enjoyed your hols, agree with your comments about the pylons - has been ongoing for a wee while & looks like lasting a few more years yet

What a way to get your fitness back, some great hills bagged there. You certainly had some great weather as well. Nicola would agree about the wee bookil looking a bit scary, I remember her saying "what that one!?"

I'm really pleased to see you out and about again, Geoff

Thank goodness the weather was kind to you both this time and that you got plenty of excellent walking done!
Some great photos as well