I've had my eye on these two Ballachulish Munros for some time, but I had been waiting for the right moment. With some Annual Leave to use up and therefore a rare opportunity for some midweek walking, and also with the forecast for once suggesting that the best of the weather would be along the west coast, today seemed to be the perfect time for Beinn a'Bheithir

.
Although it's probably fair to say that the standard ascent route for these two is from North Ballachulish rather than Ballachulish, the alternative Ballachulish start (as suggested in the website route summary) has several potential advantages: the opportunity for a circular route; a grand big car park next to the Co-Op supermarket; plus a chance to include Sgorr Dhearg's eastern Top, Sgorr Bhan, and the very fine connecting ridge between the two.
Maybe what swung it for me, though, was the chance to bag three Sgorrs (the two Munros plus the Top) in one outing. Strangely enough, although I was up to 72 Munros prior to these two - far more than I'd ever expected to get to a few years ago, when I started dragging my portly self back up them in my forties - an alphabetical list of the ones I'd done had a huge gap towards the end, where there was that big cluster of Sgorrs and Sgurrs. Yep, I'd dragged myself up seventy-two assorted Beinns ("Hills"), Carns ("Cairns"), and more Mealls ("Rounded Humps") than you could shake a trekking pole at; even a couple of Stucs; but nothing as pointy as a Sgorr

. Hopefully I could change that today...
The forecast was good early on, but clouding over from the east later in the day, so an Early Start was in order. I got to Ballachulish just after 8 a.m.: the sun was shining, the birds were singing, and there was a grand view of my first target, Sgorr Bhan. As per the website's route directions, I followed Loanfern over the bridge then went left into the lane past the primary school. Immediately past the school, a gate gives access to a field eventually leading up onto Beinn Bhan, which is a lower outlier NNW of Sgorr Bhan. It was a steep start, and there was no path, but at least it wasn't as boggy as I'd feared... 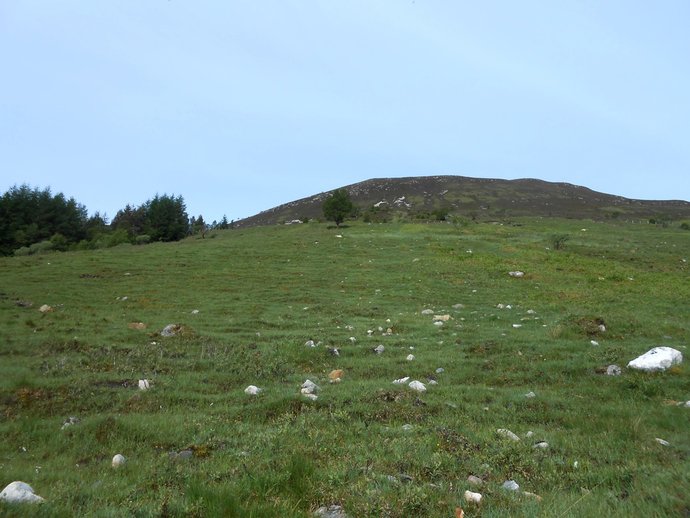 At the top left corner of the field, I crossed the fence and plodded up through steep heather to eventually find a path, which cut uphill to the right, eventually taking a fairly sharp left turn to gain the Beinn Bhan ridge. There were grand views back down over Ballachulish: 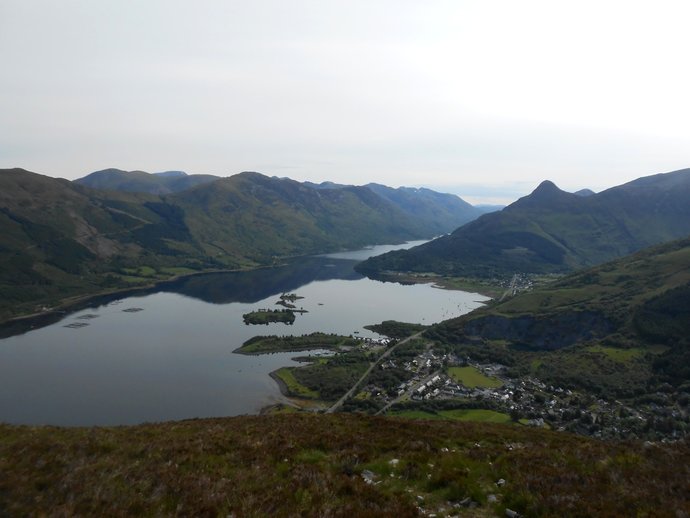 And a wee zoomed shot down over Glencoe Village, with the Pap of Glencoe prominent above it: 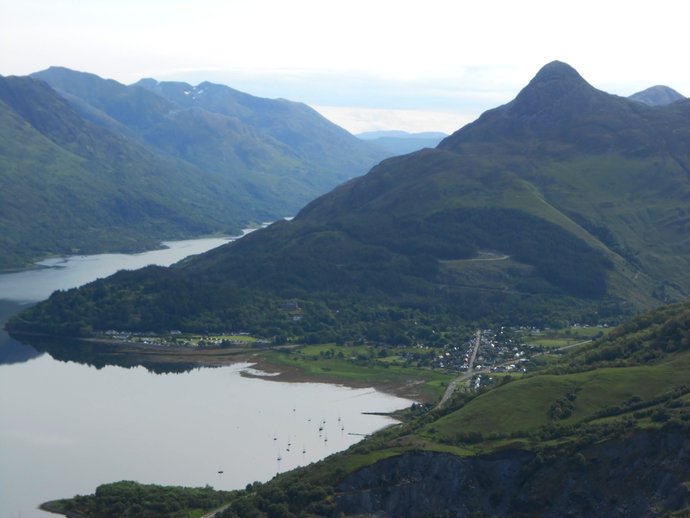 Eventually I gained the ridgeline, and the first and largest of a series of waymarker cairns. 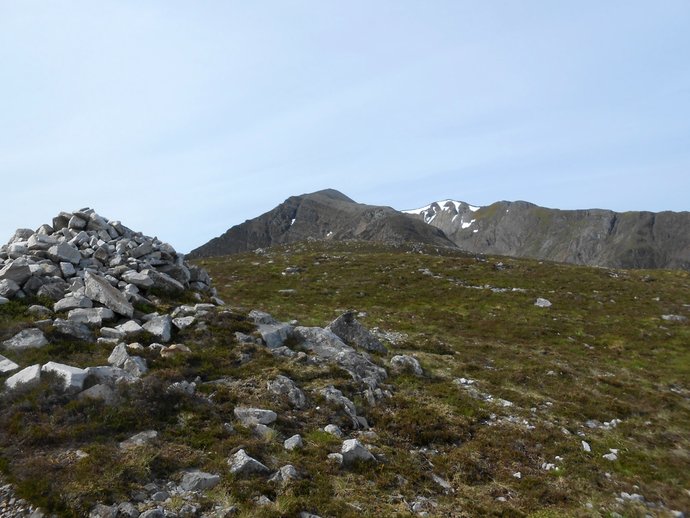 Looking at Sgorr Bhan and Sgorr Dhearg from here, it's easy to see how they got their names: Sgorr Bhan is indeed all white with quartzite rubble, while Sgorr Dhearg's steep scree slopes have a definite reddish tint. 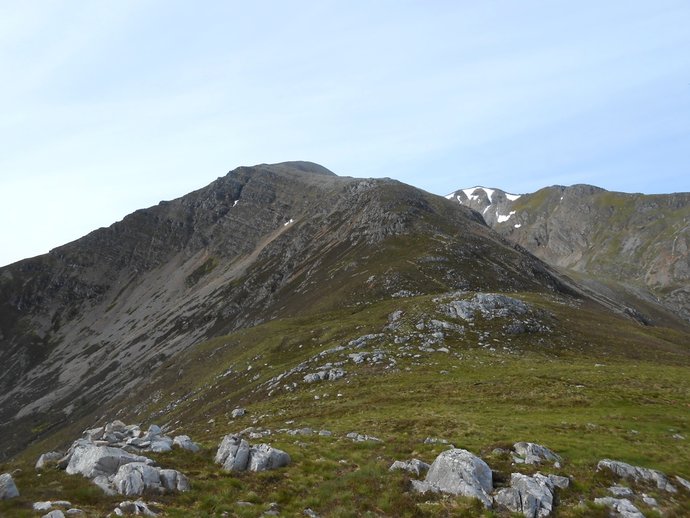 The route from Beinn Bhan up to Sgorr Bhan was straightforward at first, but it steepened higher up, with the path avoiding a rocky section of ridge to the right and then cutting back up left fairly steeply to regain the ridgeline. It was something of a relief to eventually reach Sgorr Bhan's summit cairn, where there were more grand views. 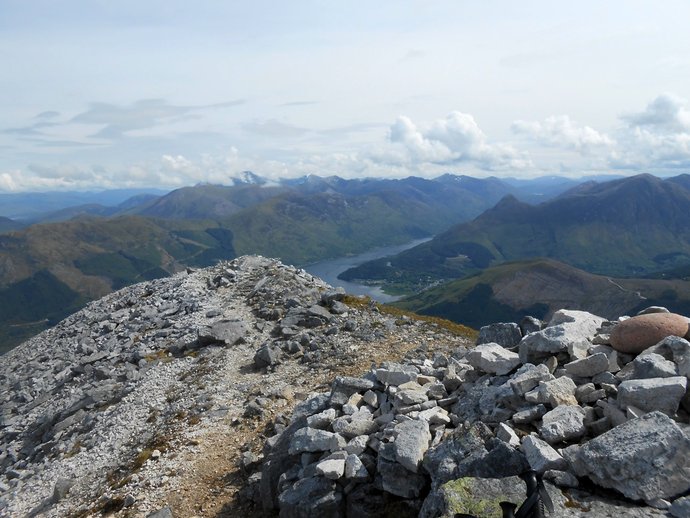 Finally I got a proper look at Sgorr Dhearg: undoubtedly a good-looking mountain. The real reward for all that fairly steep ascent is the connecting ridge between Sgorr Bhan and Sgorr Dhearg: it is a thing of beauty. It was as good to walk along as it looks, with a true sense of exhilaration from relatively steep drops on both sides, but also with an excellent path straight along the ridgeline and no real exposure.It seemed no time before I was at Sgorr Dhearg's delapidated rump of a trig point, which is now half-buried in an evolving cairn. One advantage of the trig point's disintegration is that it is now just the right height to provide a comfy seat Great views in all directions! Firstly, back along that ridge to Sgorr Bhan: 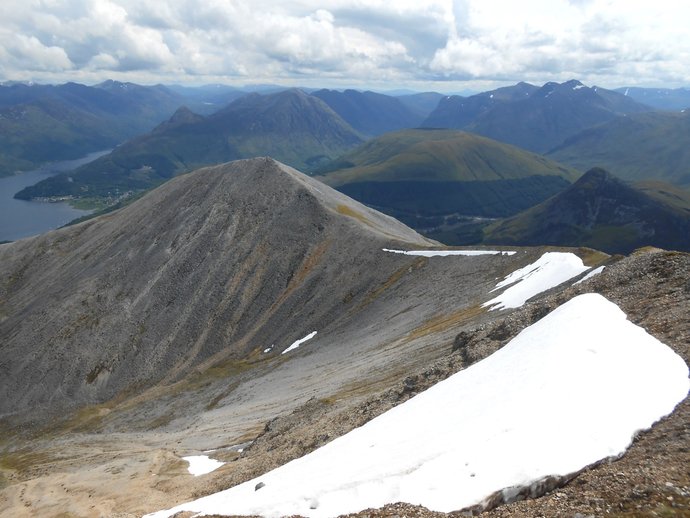 The view ahead to Sgorr Dhonuill, with Lismore, Mull and several smaller Hebridean islands visible in the distance: 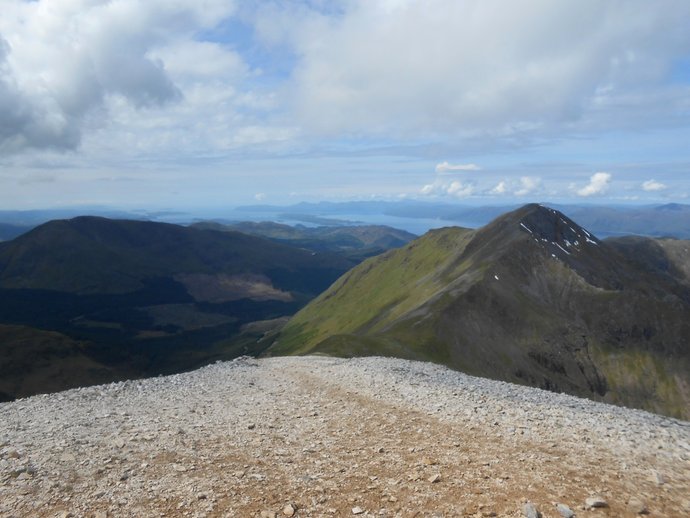 From here, Sgorr Dhonuill doesn't look that far away, but that's deceptive. It was a long plod down to the rather boggy bealach - probably the least enjoyable bit of the route, to my surprise. However, things picked up again rapidly on the re-ascent of Sgorr Dhonuill, which very soon became rocky and interesting. At the second of two brief levellings, Sgorr Dhonuill's conical summit presented a classical Toblerone-box mountain profile, strangely enough rather reminiscent of Cir Mhor on Arran of all hills, and just looking fantastic from this angle. 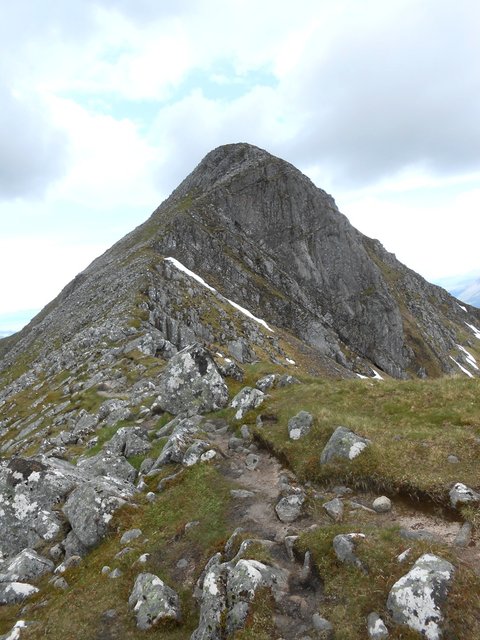 I had been slightly nervous of this last wee bit, as route descriptions tend to mention both scrambling and significant exposure. However, in the event, there was a good path all the way up; the scrambling was very easy; and although there is one moment of exposure above a high crag, this happens on one of the flattest and least scrambly bits of the path. The summit cairn arrived quite suddenly, and the fairly large and flat summit plateau came as a real surprise after all that rockiness. 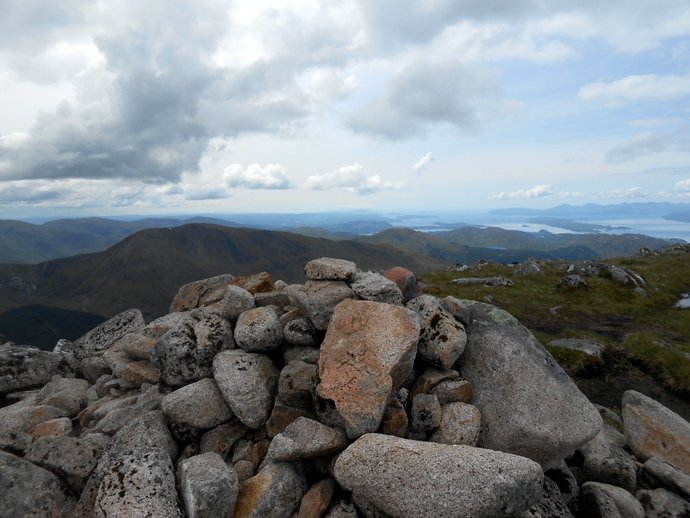 If anything, even better views in all directions from this one! 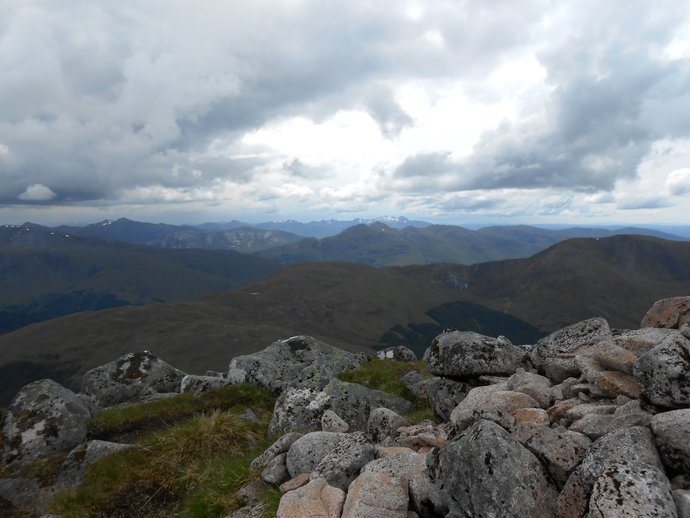 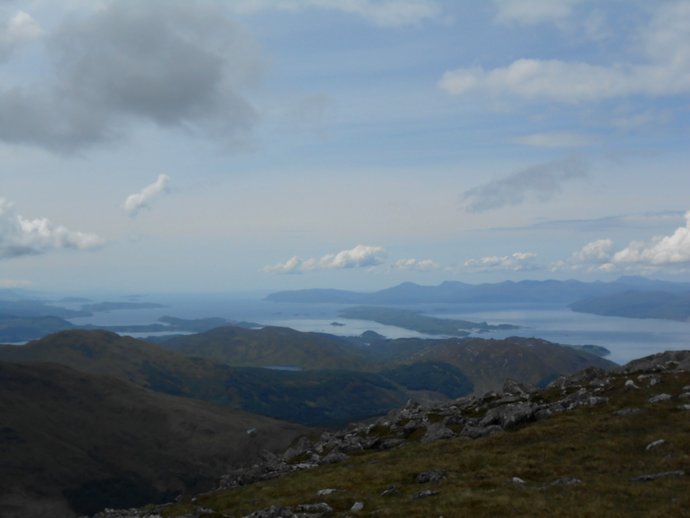 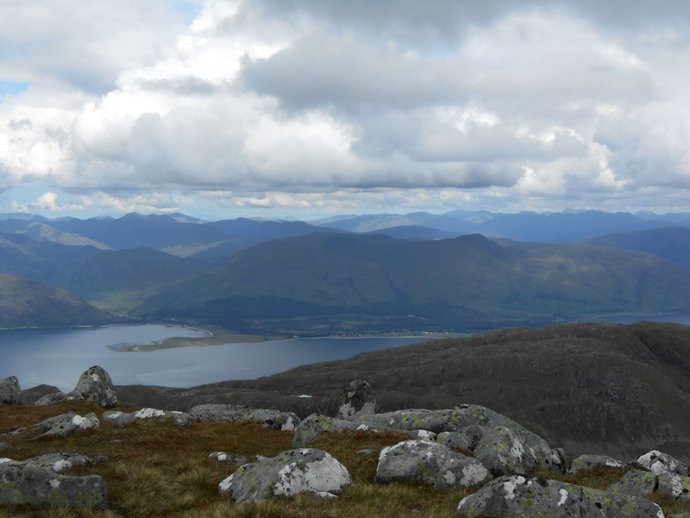 Sgorr Dhearg looked imposing when viewed from here - although it definitely looks higher in this view, in fact there's only 23 metres in it, and although Sgorr Dhonuill loses out slightly in height, it gets my vote as the finer hill of the two, being more entertainingly rocky and having slighly finer views. 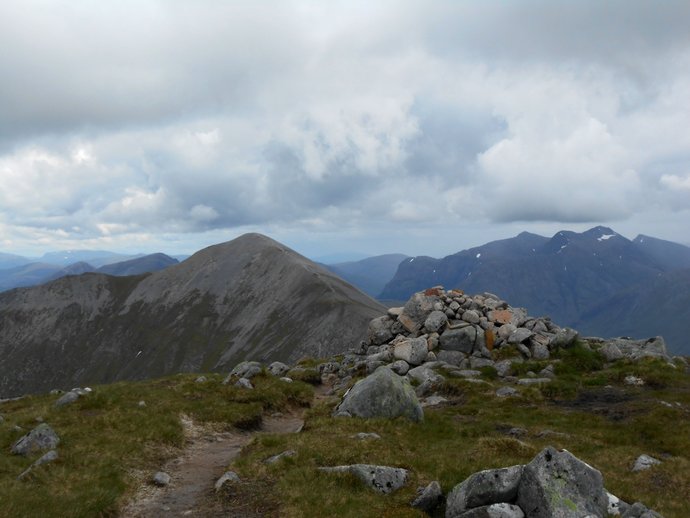 Before I left, I couldn't resist sneaking back for one last view out over Mull and Lismore: On leaving Sgorr Dhonuill's summit to head back down to the bealach, there was an intriguing view down its craggy north ridge. 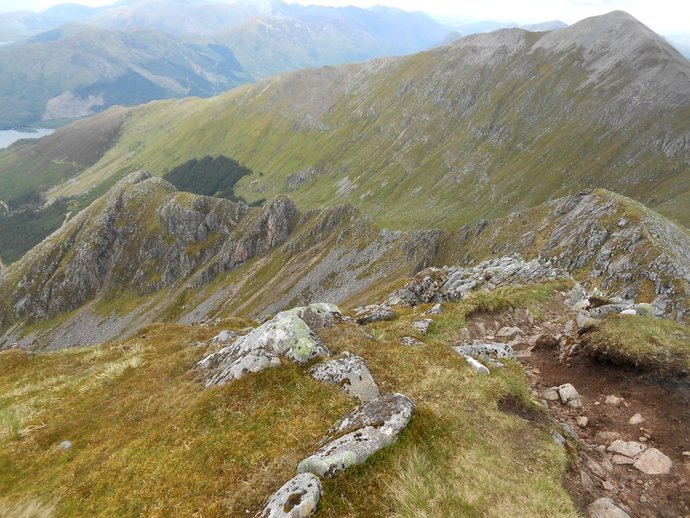 Once safely back down at the bealach, I took the boggy and intermittent descent path into Gleann a'Chaolais. Although the terrain was squelchy in some bits, craggy in others, and sometimes both at once (quite an achievement really), at least the scenery remained fine. 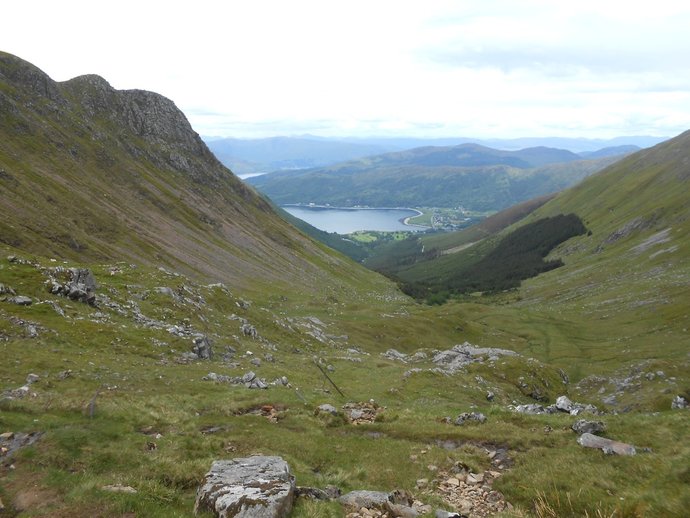 Gleann a'Chaolais is heavily forested lower down, and it would be easy to miss the route down through the trees - I nearly did in fact, as the path is an intermittent luxury at best. In retrospect, the trick here is to stick close to the right-hand edge of a line of fencing that runs all the way down from the bealach. Eventually, after an unedifying bit of off-piste wandering about through the Christmas trees to the left of the fence, I finally twigged that the path had to be up to the right of the fence. And indeed it was, with a Forestry Commission sign and everything! 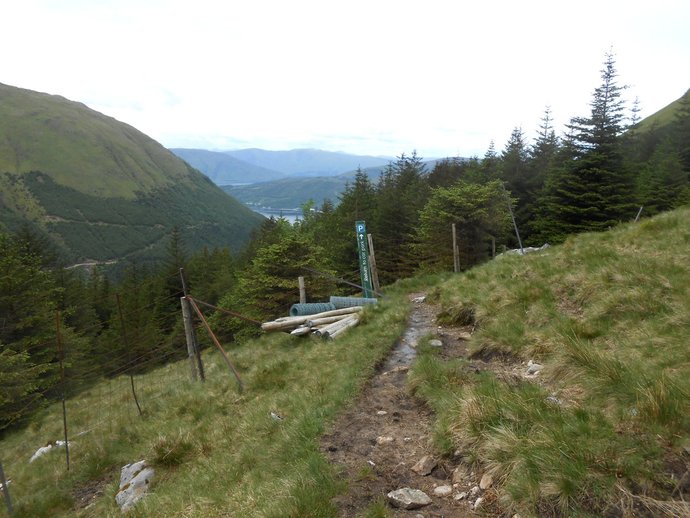 From here, it was an enjoyable romp back to Ballachulish, at first on a good forest path. 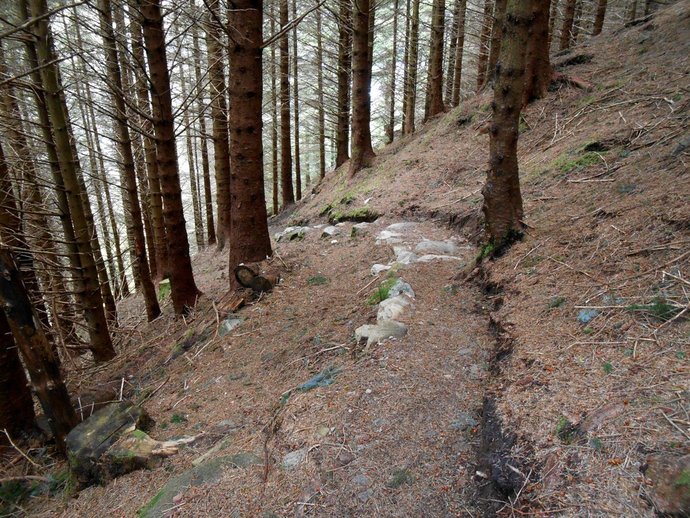 This well-constructed wee path, complete with stone staircases at several sections, crosses over one forestry road to eventually end at a second forestry road lower down, where a right turn eventually took me back to the church just west of Ballachulish, with a pavement along the side of the A82 back into the town. Another grand hill day, and I lucked out on the weather again

I take it the ridge walk was fine & enjoyable?

I take it the ridge walk was fine & enjoyable?

Sorry, I had some I.T. issues there on my first attempt at submitting the report - photos but I lost nearly all the text! My edit seems to have worked though - now with Words and everything

bobble_hat_kenny wrote:Sorry, I had some I.T. issues there on my first attempt at submitting the report - photos but I lost nearly all the text! My edit seems to have worked though - now with Words and everything

Thanks, we have all sadly been there

Smashing photos - these are 2 great hills for the views, and the ridge walk is a joy.

Great weather and brilliant views. Had planned to do these two a couple of weeks ago but in the end I couldn't be bothered with the car journey so chose something a bit closer to home. After reading this I really want to walk these hills soon.

Loved Beinn a'Bheithir when I did it, still up there as one of my favourite days in the moontains!

Loved Beinn a'Bheithir when I did it, still up there as one of my favourite days in the moontains!

Cheers! It was definitely one of my best Moontain Days too. Having used a few days of Annual Leave for hillwalking purposes at the end of last week, I was just soooo lucky with the weather in retrospect