I wasn't very well organised for this walk, i.e. did not have enough food with me. Original plan was to go over some of the Dodds as I hadn't done these before. We agreed to go from Glenridding, via Sheffield Pike and see how we got on with the Dodds, with a vague idea that Hartside and Stybarrow Dodd would be enough, but the problem is, once you reach the top of one Dodd - there's another and another and it's very tempting. In the end it was Stybarrow Dodd, Watson's Dodd and Clough Head as well. I never knew one packet of crisps could be eaten in so many stages and seem to last so long. When I'm sitting at home it takes me about a minute to eat a packet!

Along Greenside Road and then uphill before the cottages following The Rake between Glenridding Dodd and Sheffield Pike. Didn't go onto Glenridding Dodd this time although we easily could have.

Stopped for a breather on the way up Heron Pike. 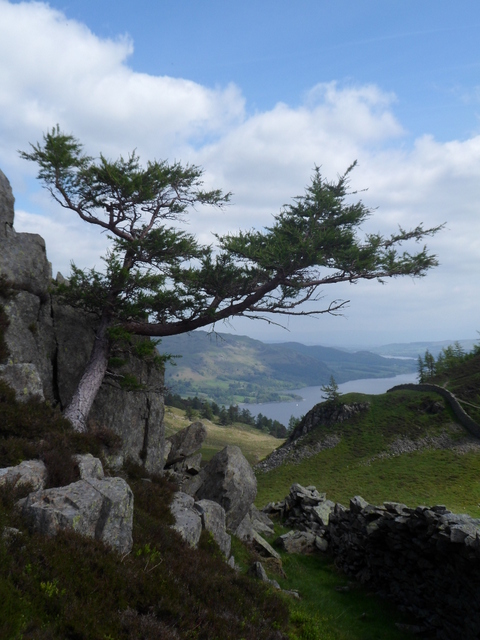 View of Ullswater while heading for Sheffield Pike

Paused to look across to Catstye Cam and Helvellyn on the way up. Last time I came up here this was all frozen and easy to walk on but today a little bit boggy in places. View to Catstye Cam and Helvellyn


The top of Sheffield Pike, with the sky looking a bit moody. It was a bit dull on top of Sheffield Pike - I ate my cereal bar on the understanding we were only going to Stybarrow Dodd.


The H and M on cairns and markers round here mark the boundary between the Howard estate of Greystoke and the Marshall estate of Patterdale. The route ahead was down to Nick Head and up on to White Stones which seemed straightforward and didn't take long. 
From here we walked out to Hartside but the cairn was already spoken for. One of the cairns on Hartside complete with wildlife.


Then it was a case of cutting back to Stybarrow Dodd which seemed a gentle plod to the top. 
We could see the top of Watson's Dodd so it seemed simple to go there. I ate half my crisps and saved the rest for later as I was beginning to get the feeling we would be tempted to go on to Great Dodd and I would be starving. Went to the top of Watson's Dodd, not too much to say about it really except that it makes you think you can now go on to Great Dodd. So we did. Not too much to say about Great Dodd either except that there are good views to the west but it was a bit hazy for photos. Should we have turned around now? - "yes" said my stomach, "no, let's go to Clough Head" said my other half - so I ate a few more crisps, told myself I wasn't starving, and off we headed for Clough Head. 
By the time I reached the top of here I was starving (did I mention that already) so had my last quarter of a packet of crisps. I did offer them to my other half but in the most 'don't you dare take one' way I could. He didn't risk it! Then it was a long trek back up most of Great Dodd (again). Looking across to Watson's Dodd on the way around Great Dodd


Then over Stybarrow Dodd (again) (no food for the top) and down to Sticks Pass. Looking down towards Sticks Pass, and wondering how my knees will like the next bit.

Looking down to Glenridding and Ullswater on the way down. Looking towards Glenridding & Ullswater on the way to Greenside Mines. Down the rocky path through Greenside mines and a view back to Catstye Cam.

Then is was back along Greenside road to the car.
A good walk, close to 14 miles I think, which is too far on a cereal bar and a packet of crisps!