What a day on the hills. Did this on 14/04/2010. Weather - bright sunshine, clear skies and views in all directions. For the first time I managed to get sun burned in Scotland in April.

This is a classic route. We did this with 2 cars leaving one at the Ben Lawers hotel and starting from the National Trust car park. Ascent of Beinn Ghlas begins straight out of the car park, through the fenced off nature reserve. Choice is made a hundred meters or so after leaving the nature reserve - if you don't fancy Beinn Ghlas, then take the left hand route which meets the Ben Lawers path on the far side of the hill (I've done this before when I've just gone up Ben Lawers and done Beinn Ghlas on the return.) Anyhow, ascent is steep and straightforward - you can see where you're going most of the way up (well at least when it's as clear as it was yesterday!)

After a short break on the summit, we forged on following the obvious path down. There's a bit of spring snow on the way up and down, but nothing major. The belach is quickly reached and the short and steep ascent of Ben Lawers begins. The Trig point seems to be vertically above you for half of this, but seems to take an age before it comes closer. Agin, some snow on the ascent, but no real problems here - just firm enough to hold your weight but with a bit of give for grip. Amazing views from the summit of Ben Lawers including most of the mountains of southern Scotland - Ben Nevis is particularly obvious, but look harder and you'll see the Buachaille Etive, Ben Lomond, Ben More, Ben Vorlich etc etc Up until this stage we still hadn't seen anyone else which amazed me considering the schools were still on holiday and lots of universities were still off. Anyhow, forging on we walked down the large snow field on the NE face of Ben Lawers with the added entertainment of some glissading. Makes me wish I'd put my waterproof trousers on!

Another short steep pull up to the top of An Stuc - a very nice summit. By this stage we were sat in our shirt sleeves baking in the sun! Headed off in the direction of Meall Garbh and reached the (in)famous scramble. Descent certainly seemed near vertical. It was relatively loose under foot with several rocks kicked down in the process (good to be at the back here.) ABout half way down as we reached the most interesting section we met a couple of people coming up along with 2 labrdors half way up the scramble - again take care of rocks as we now had two people coming down behind us as well and the small stuff was flying.

The belach was quickly reached and the climb up Meall Garbh loomed in front. Again - another short steep pull up (especially the first bit) before the summit was quickly reached. A further stunning view was the reward - not just the hills, but also the large broken ice floating on the Lochan na Cat. A very easy walk down, bouncing down in the snow, and we made the decision to head home as we all had a long drive back. An easy stroll down hill brought us to the dam at the head of the Lawers burn and we followed the good quality track down alongside the burn - try not to get seduced by staying on the land rover track if you're heading for the Ben Lawers hotel! The only problem is the overgrown thorn bushes right at the bottom - particularly if you're only in a short sleeve shirt.

A quick walk back along the road brought us back to the hotel and a good dinner - only problem was everyone was on coke. Booking a room and having a pint never seemed so tempting! A truly great day out on the hill - a really good walk made very special by the amazing weather.

Re: Ben Lawers, Beinn Ghlas, An Stuc and Meall Garbh

Where is the pictures?

I could see up the Lawers range from the big bookle on saturday and from starav on sunday and it looked nice up there. Everytime I have attempted Lawers it has been a dismal failure either due to winds making you crawl on your belly or a white out! I am scared to go up again! haha

Re: Ben Lawers, Beinn Ghlas, An Stuc and Meall Garbh

Well I forgot my Camera - luckily Simon took his, so here's a couple - I'm the fat knackered one.... 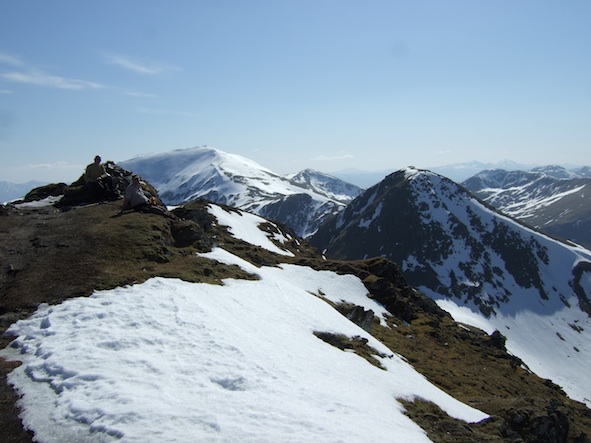 The four peaks - Beinn Ghlas at the back, the Ben Lawers, then An Stuc and we're sat on Meall Garbh. Douglas standing proud - you can see Ben Nevis in the background.