The Cobbler and Beinn Ime on a perfect day

The Cobbler and Beinn Ime on a perfect day


A great day on the Buachailles yesterday; and amazing weather this morning. So in case it deteriorated, I took this pic as we drove to Arrochar from Glencoe… 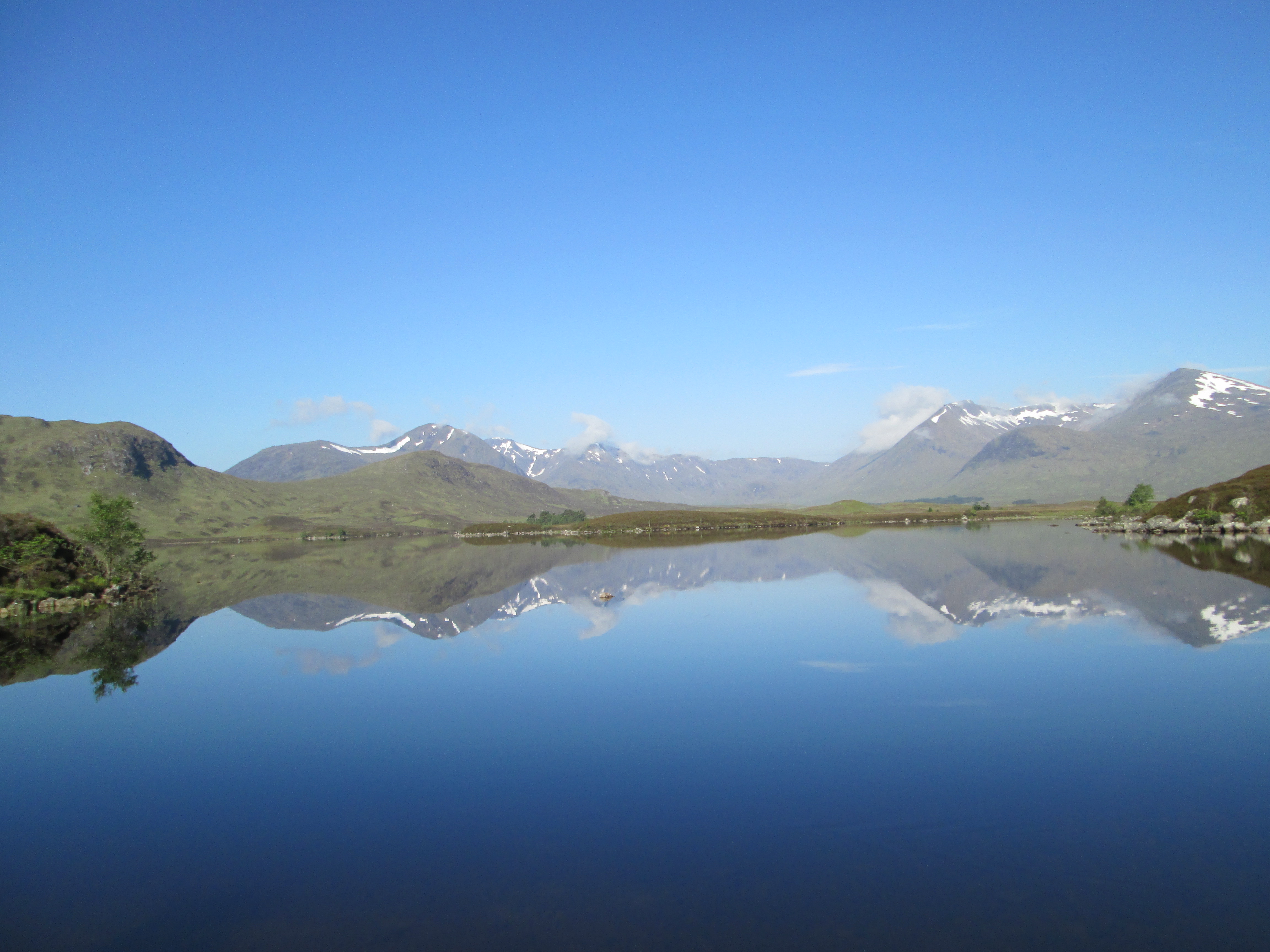 IMG_0502. On the way to Arrochar from Glencoe. On Rannoch Moor, looking across Lochan na h Achlaise towards Clach Leathad and Meall a Bhuiridh on the right, and Stob a Choire Odair and Stob Ghabhar on the left, presaging another great day's walking.

Unfortunately I seemed to be having a knee problem that had flared up and become something of a problem yesterday, so we decided to work on some unfinished business in the Arrochar Alps (on the last visit some idiot had managed to lose the map so we hadn’t time to complete all 4 munros plus The Cobbler…), 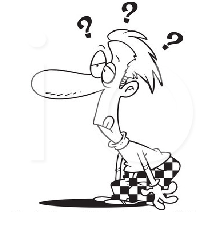 ...on the basis that The Cobbler ranks with Suilven as one of the most attractive looking hills in the country; and if we chose the right route, there would be plenty of bail out options should the knee start to play up.

Dr Frank has a negative impact on my pre-dawn rise aspirations; so we get up when we wake up (this is my interpretation, and I’m sticking to it...) It’s already light.

The midge battalions await us in Glencoe's deepest darkest Squirrel Campsite Midge Reserve. But we, the Roman Legions, are prepared: not a square millemetre of exposed un-DEETed skin. 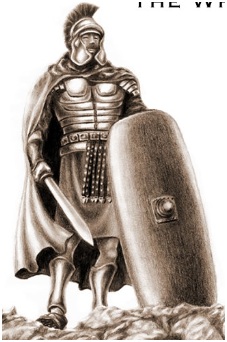 So we get away into a truly amazing sun-drenched morning (see pic above) without too much collateral damage.

And in less than an hour we’re parking up in Arrochar, after a quick bacon butty breakfast at the little café next to the petrol station (to be recommended heartily – this was our second time breakfasting there).

We started up the standard zigzagging track through the woods, but on reaching the dam, turned left to follow what, according to the OS Map, is a path up to the top of the ridge that leads to The Cobbler. Predictably perhpas, the path disappeared after a 100 metres or so, and the ascent became something of a pain (unless you have telmatological turn of mind (check it out - we WHs do a lot of this...)

Once on the ridge though, it was clear that this was the right choice. There were great views of Ben Narnain, back towards Arrochar and beyond; 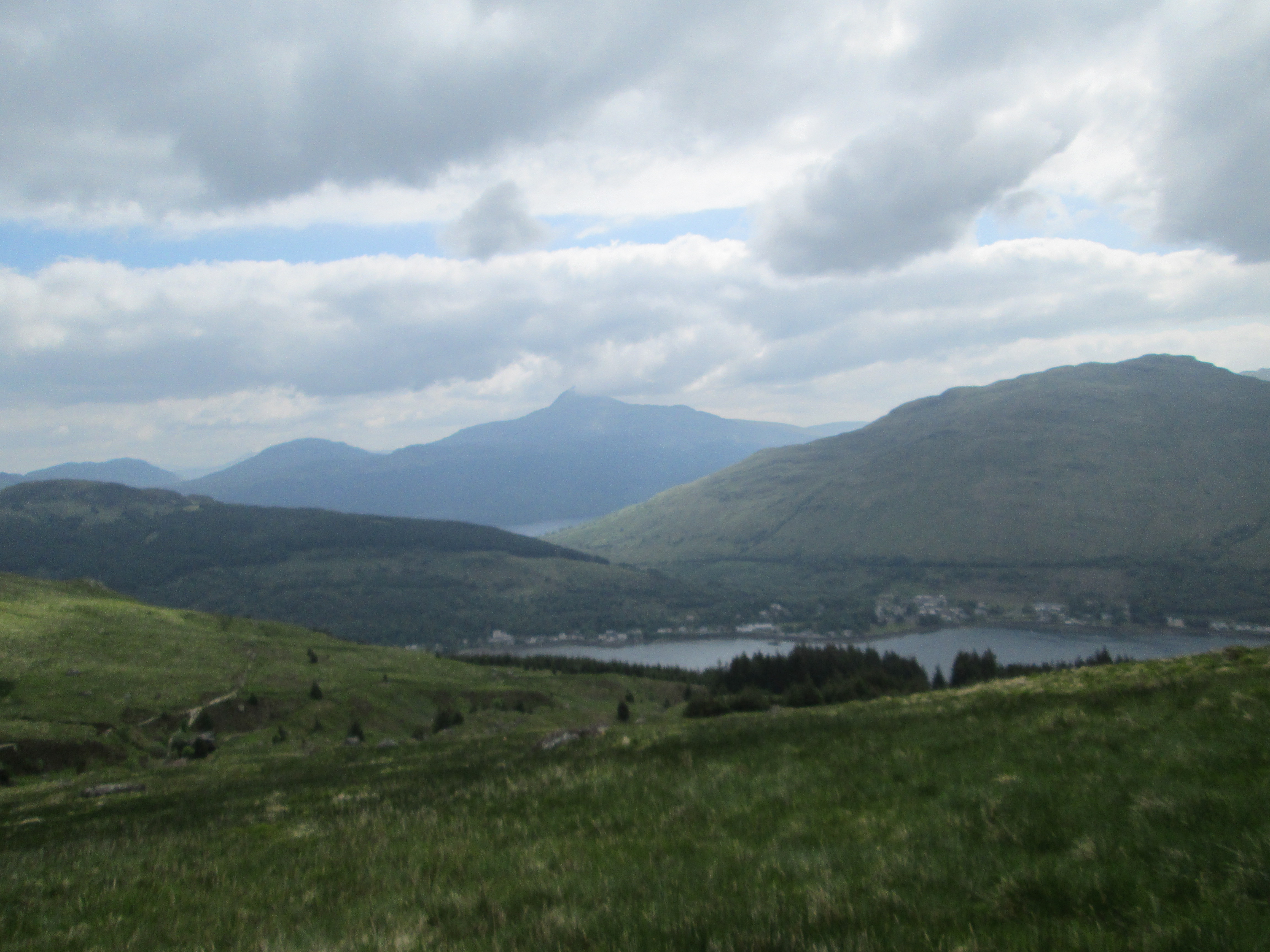 IMG_0503. Looking back from the early stage of the ridge ascent at Arrochar with, I guess, Ben Lomond in the background. 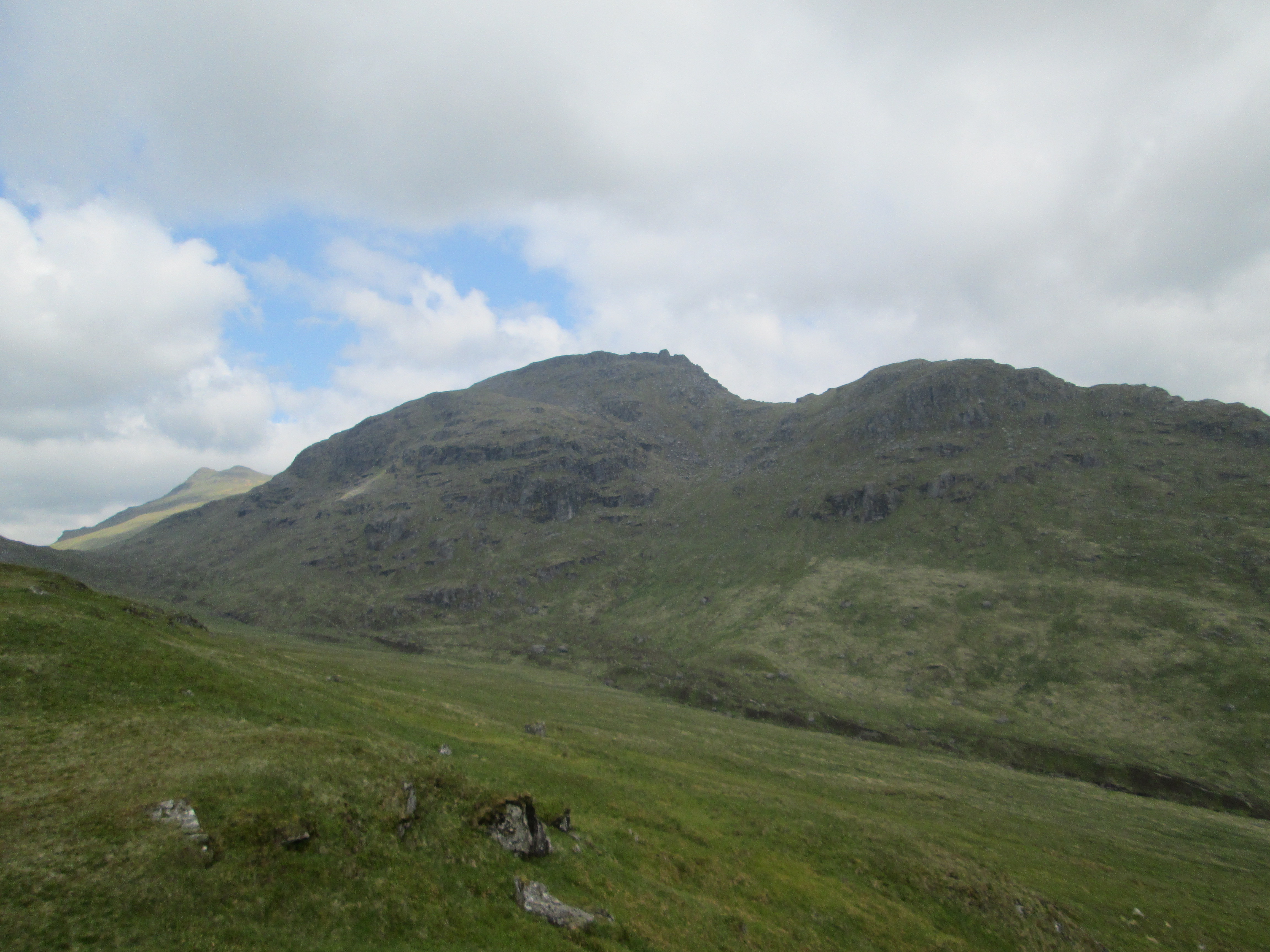 IMG_0507. Walking along the ridge is pretty easy after the hot, sweaty and boggy ascent.

...and then, suddenly, the spectacular lump of rock that is The Cobbler comes into view. 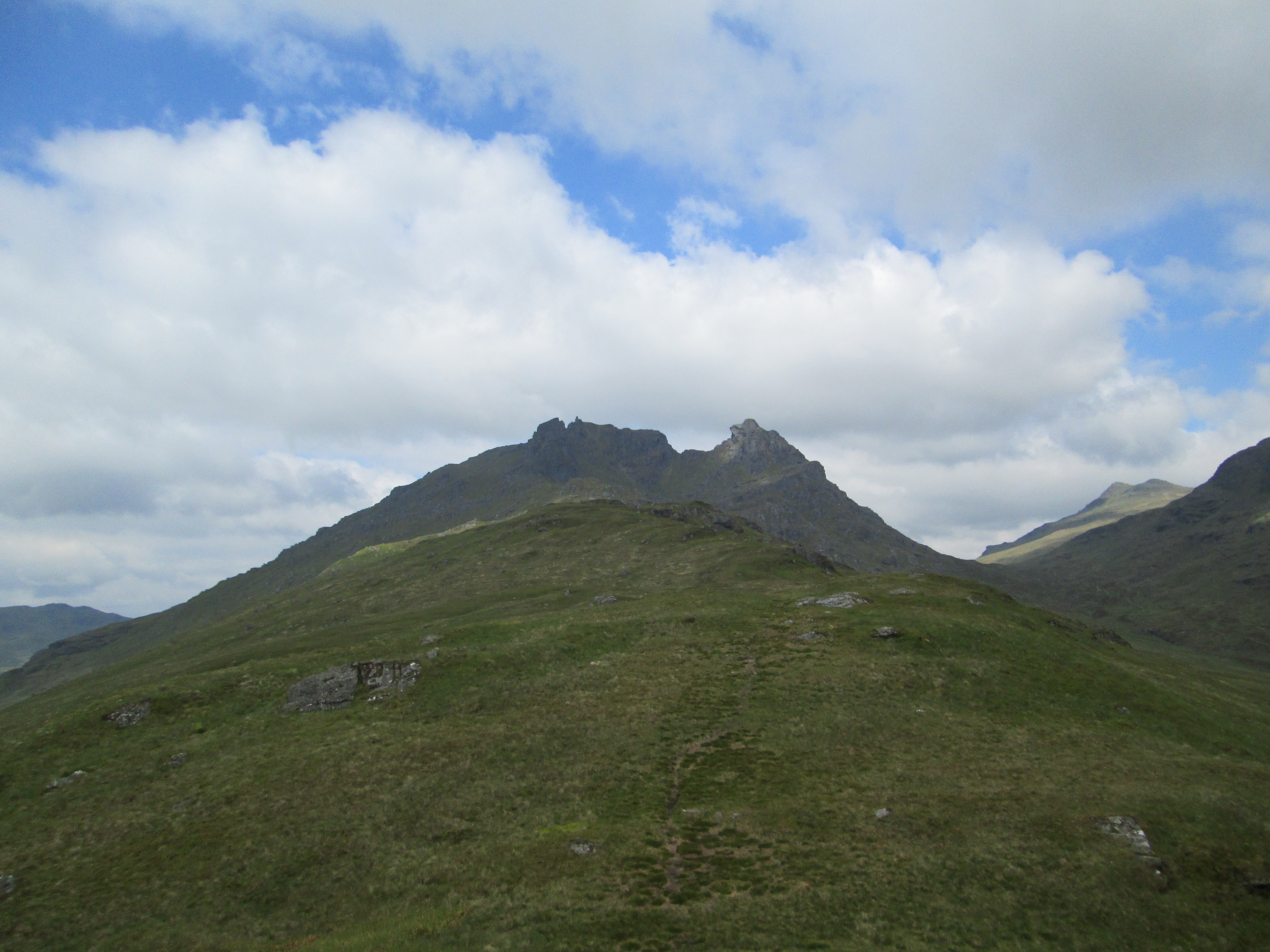 There are some hills that, the instant you see a pic of them, immediately go on to your “must do before I die” list. For me, The Cobbler is one of these. Surely no other hill has such wild rock formations?? Even after an hour plus approach walk, neither of us had really assimilated the impact of this beautiful hill: it is one of those hills you can marvel at more or less indefinitely. And it really makes me want to HATE people who live in Glasgow: as Kevin so rightly said, " It's so unfair!!!" 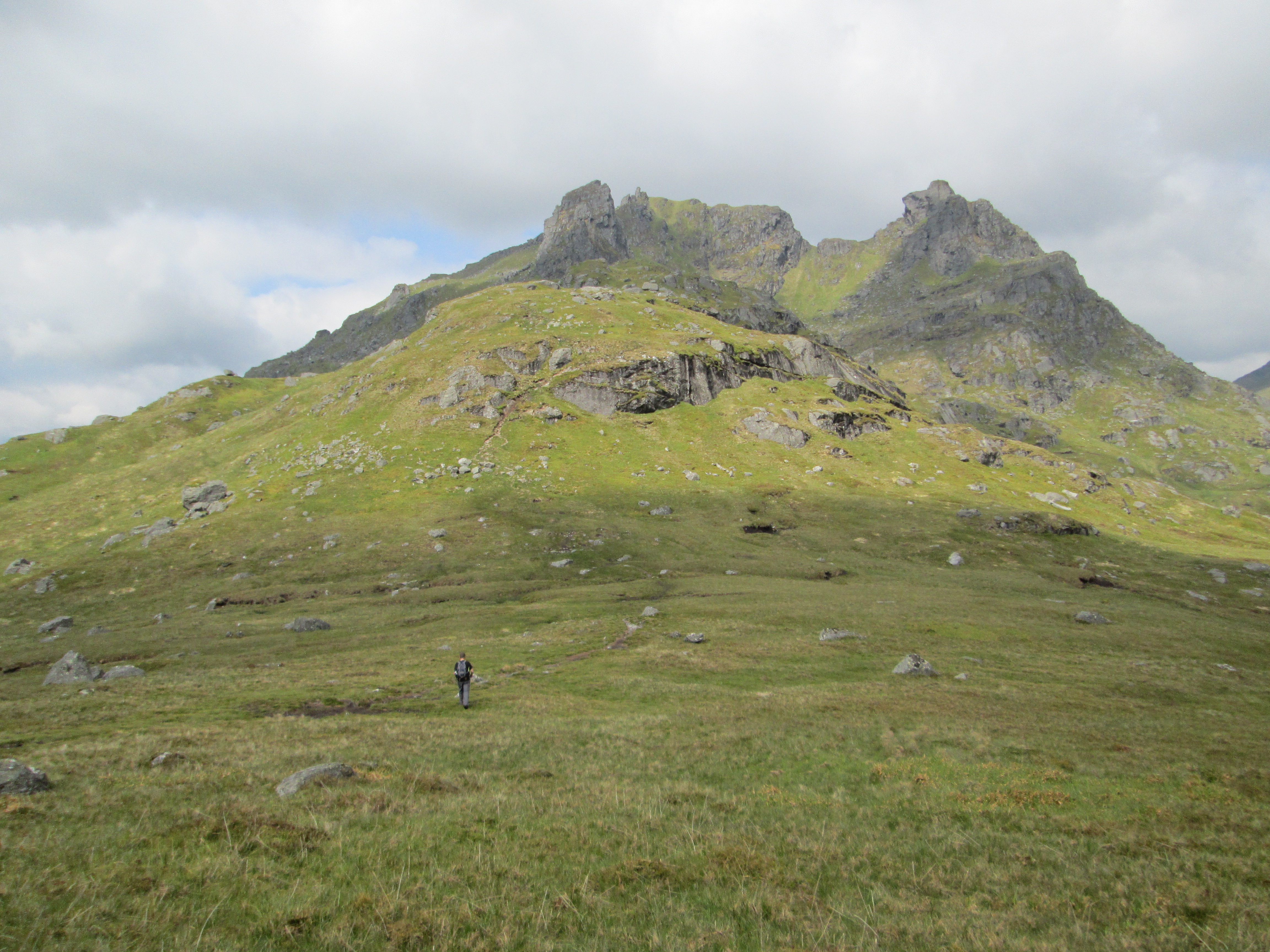 IMG_0510. I don't know what was in those bacon butties: Dr Frank is going like a stream train! 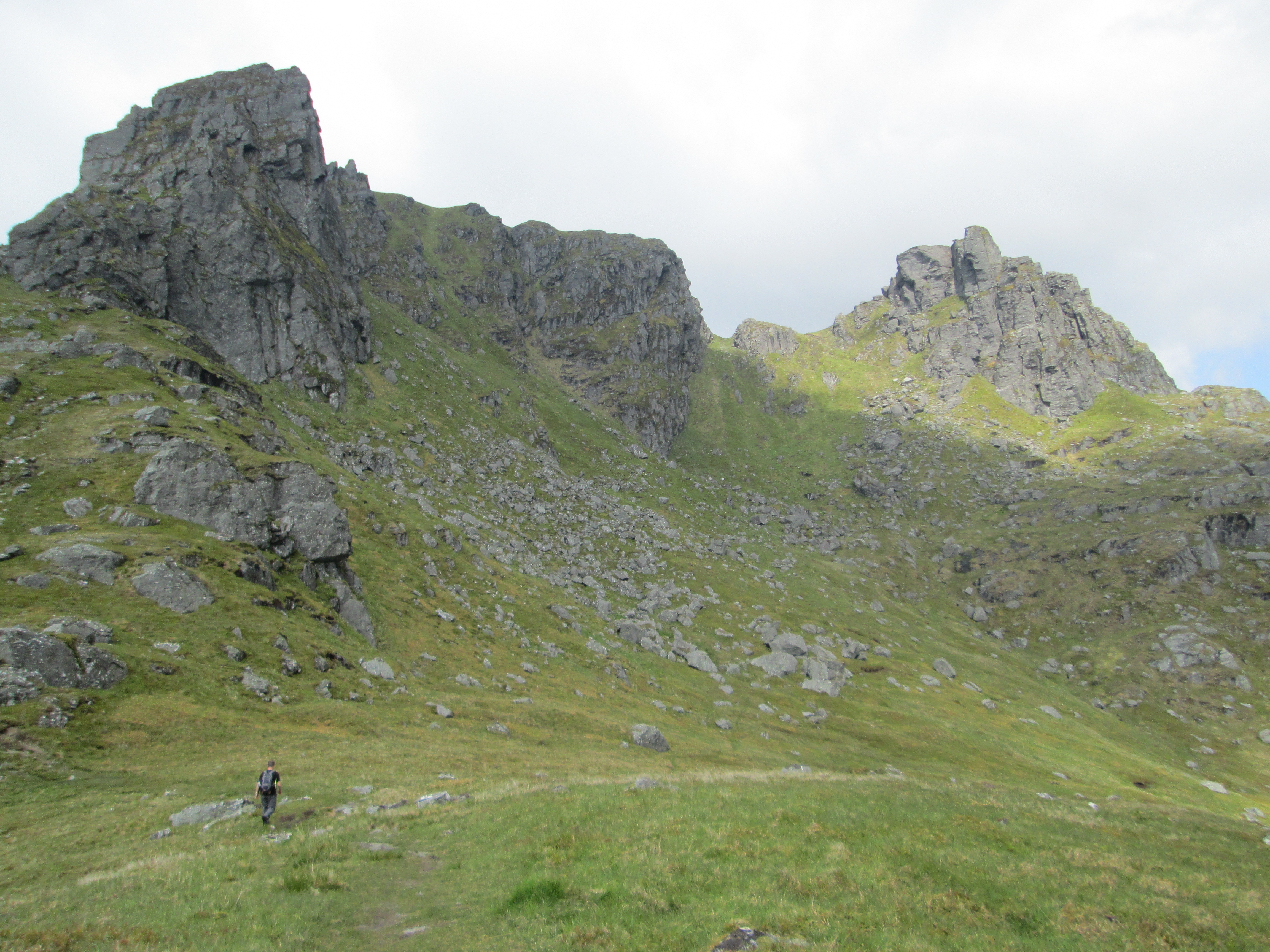 IMG_0511. From here the South top (Arthur's Seat?) looks like it might pose something of a challenge.

As it turns out, it's not too bad, although route-finding is not exactly straightforward, and rock and grass mix combined with the steep gradient does demand some care. 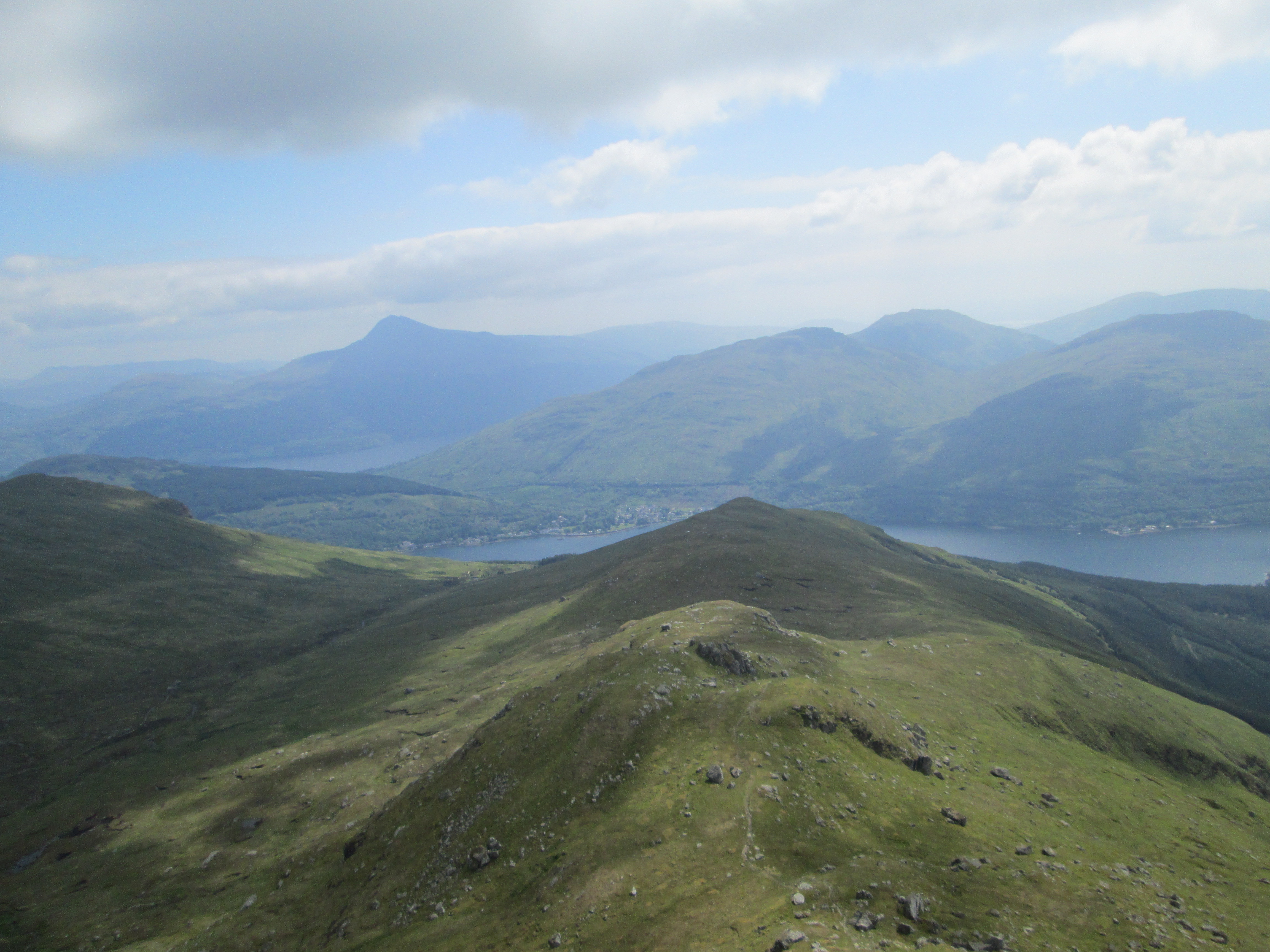 IMG_0512. Looking back along the ridge to An t' Sron, with Loch Long and Arrochar in the background, and Ben Lomond in the distance. 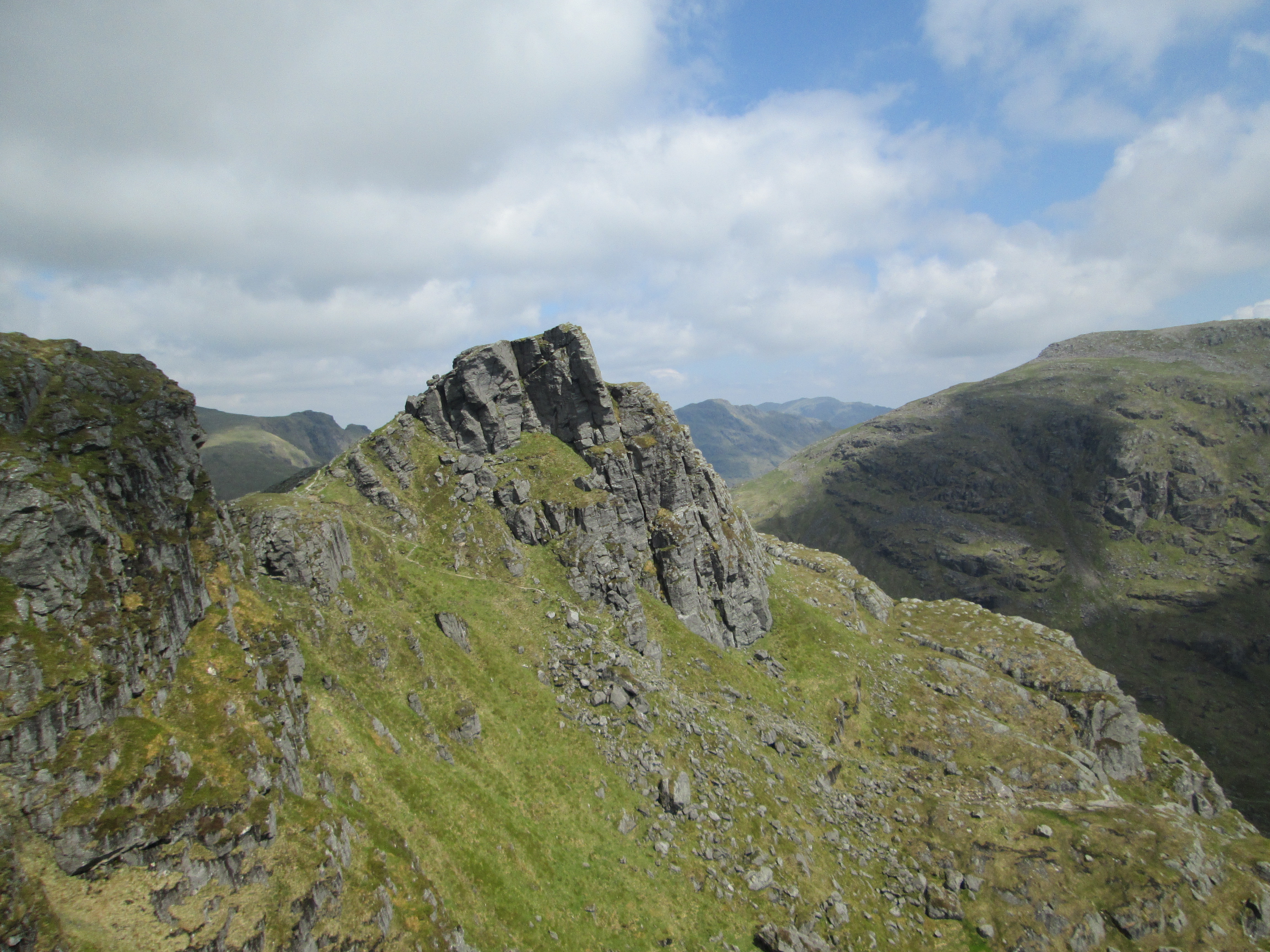 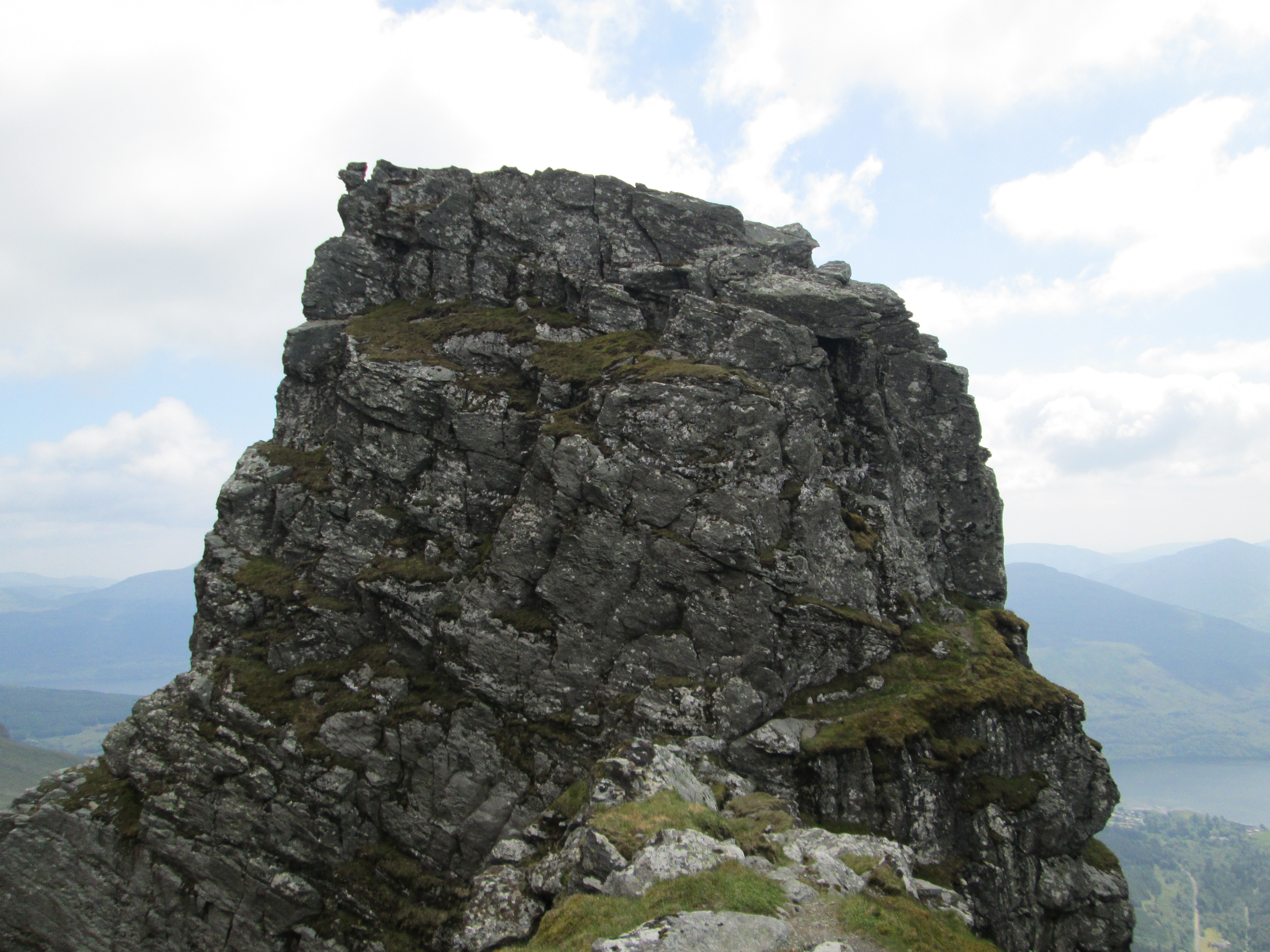 IMG_0514. A reasonably challenging downclimb from the summit. But much the best way round: downclimbing the way we came up, on a very steep and wet rock and grass mix would not be much fun. 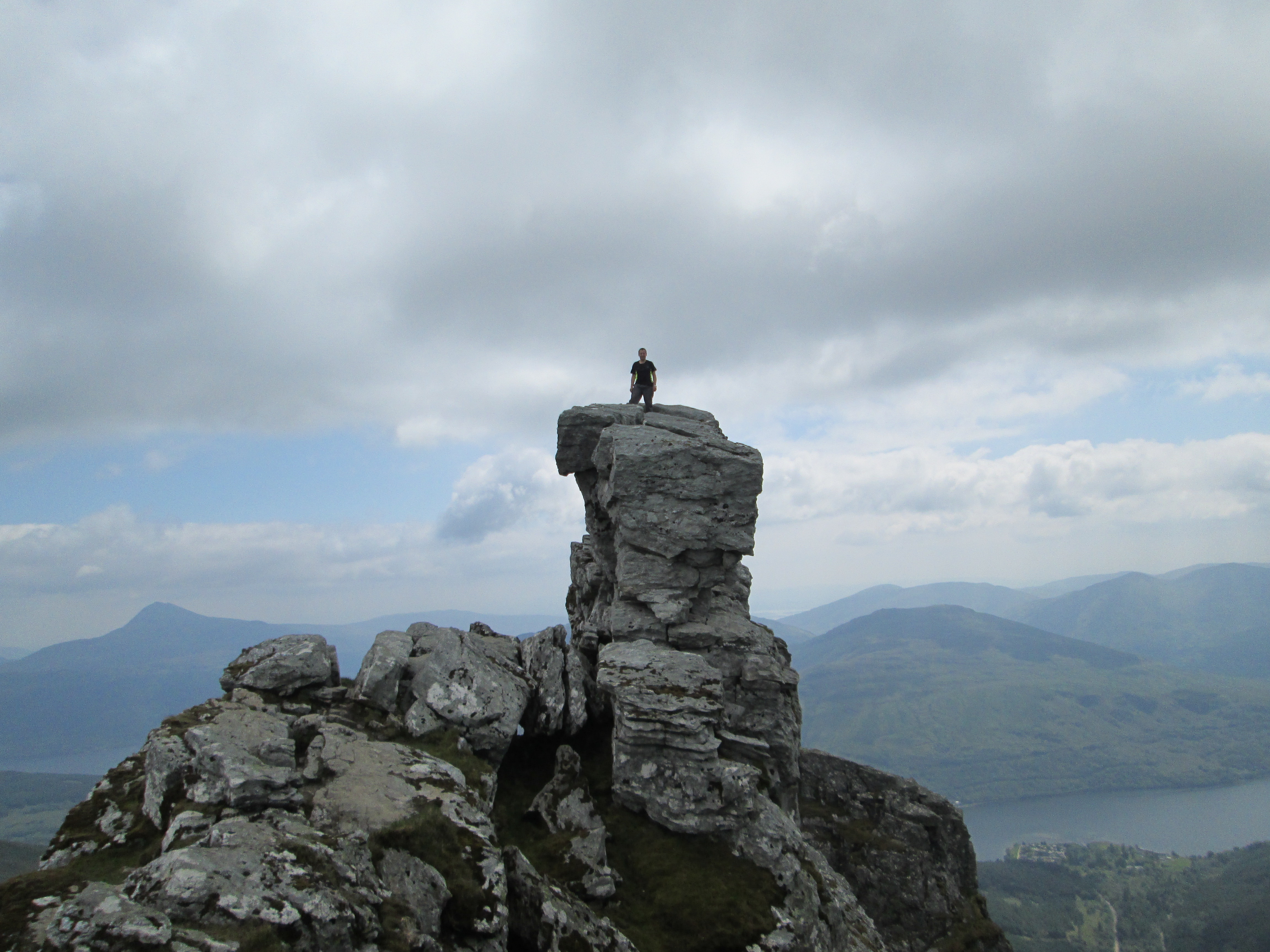 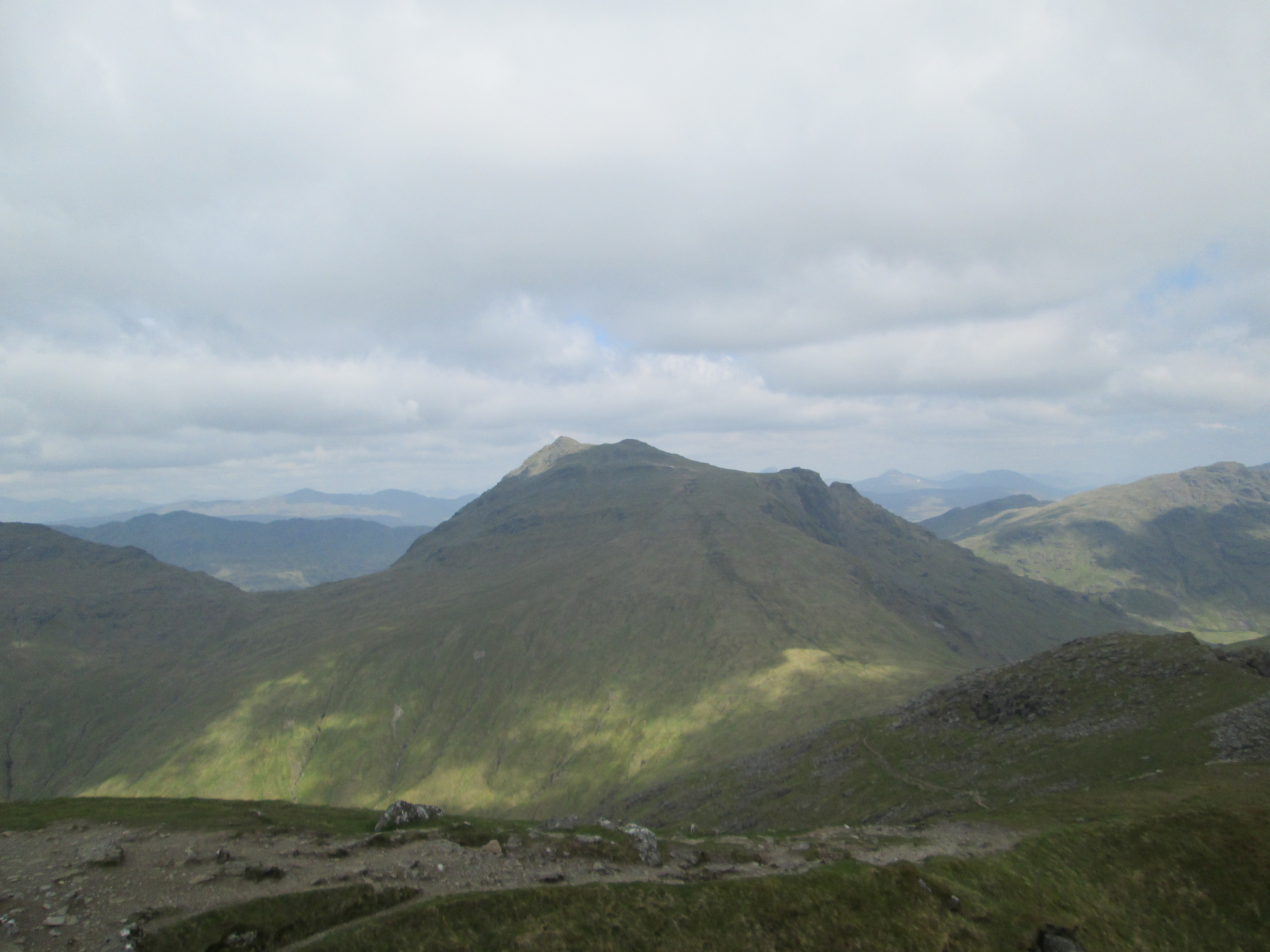 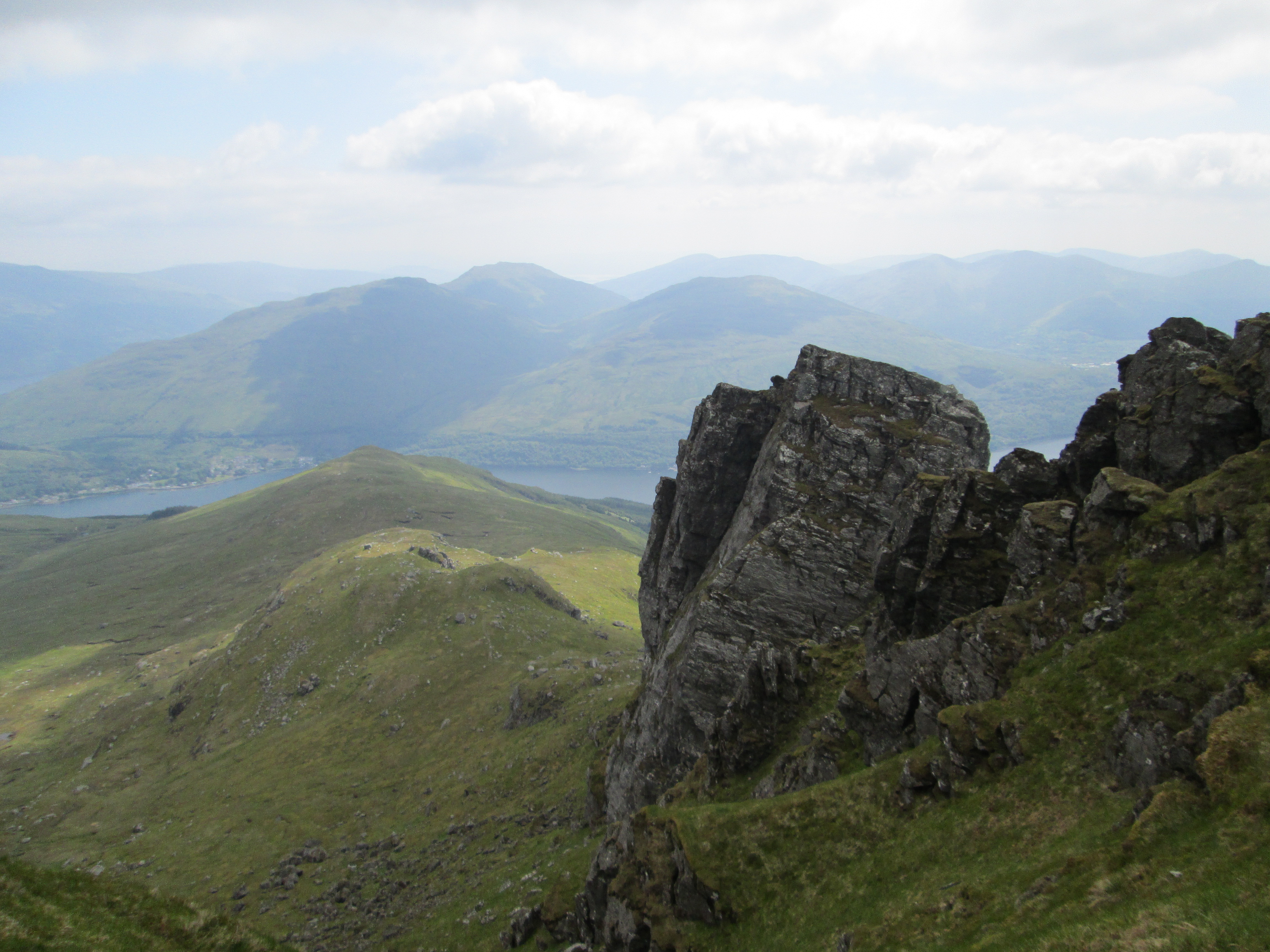 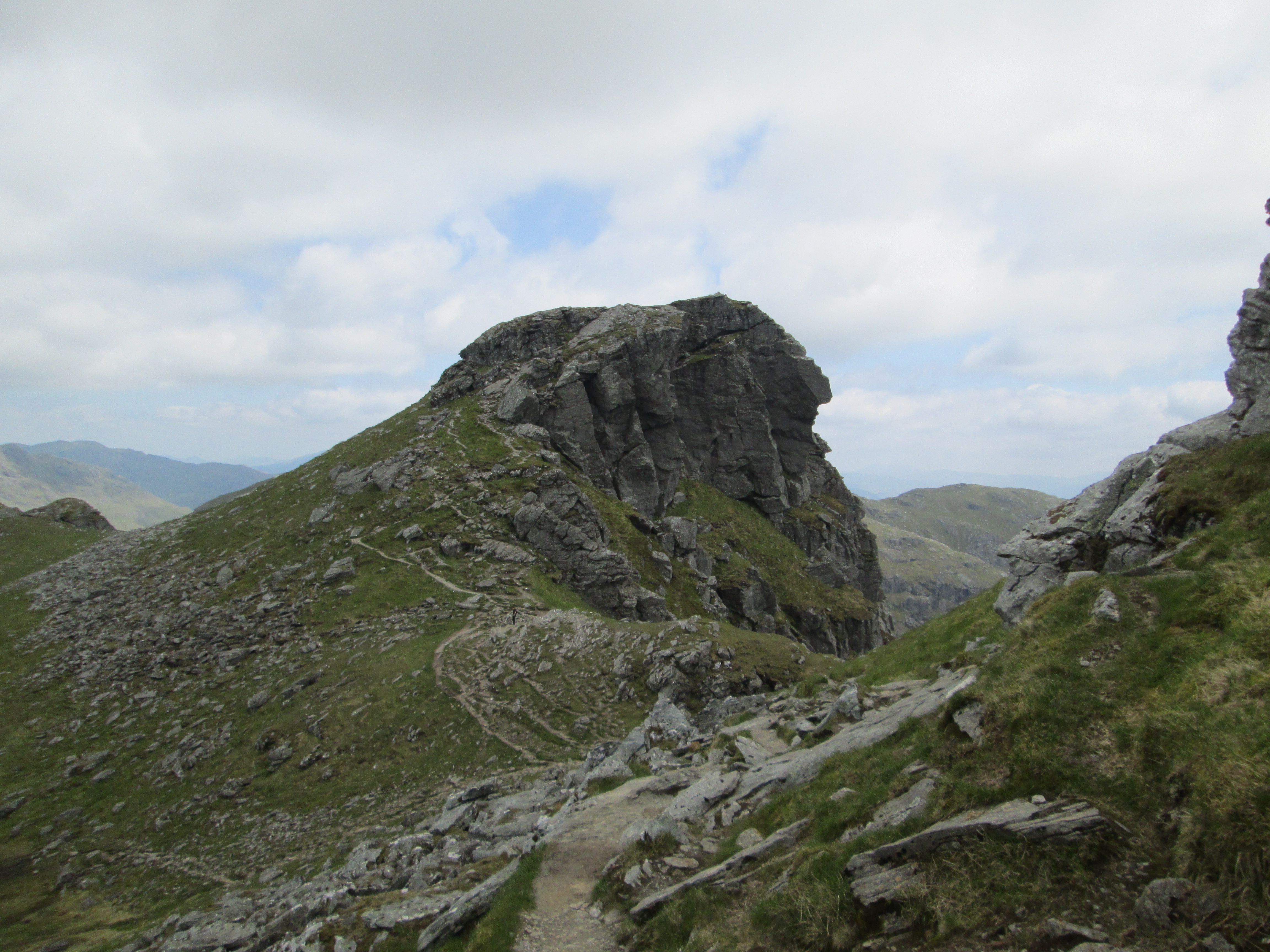 IMG_0520. Final top before we head off to Beinn Ime. We make a pit stop first. To our surprise, only 4 other people. 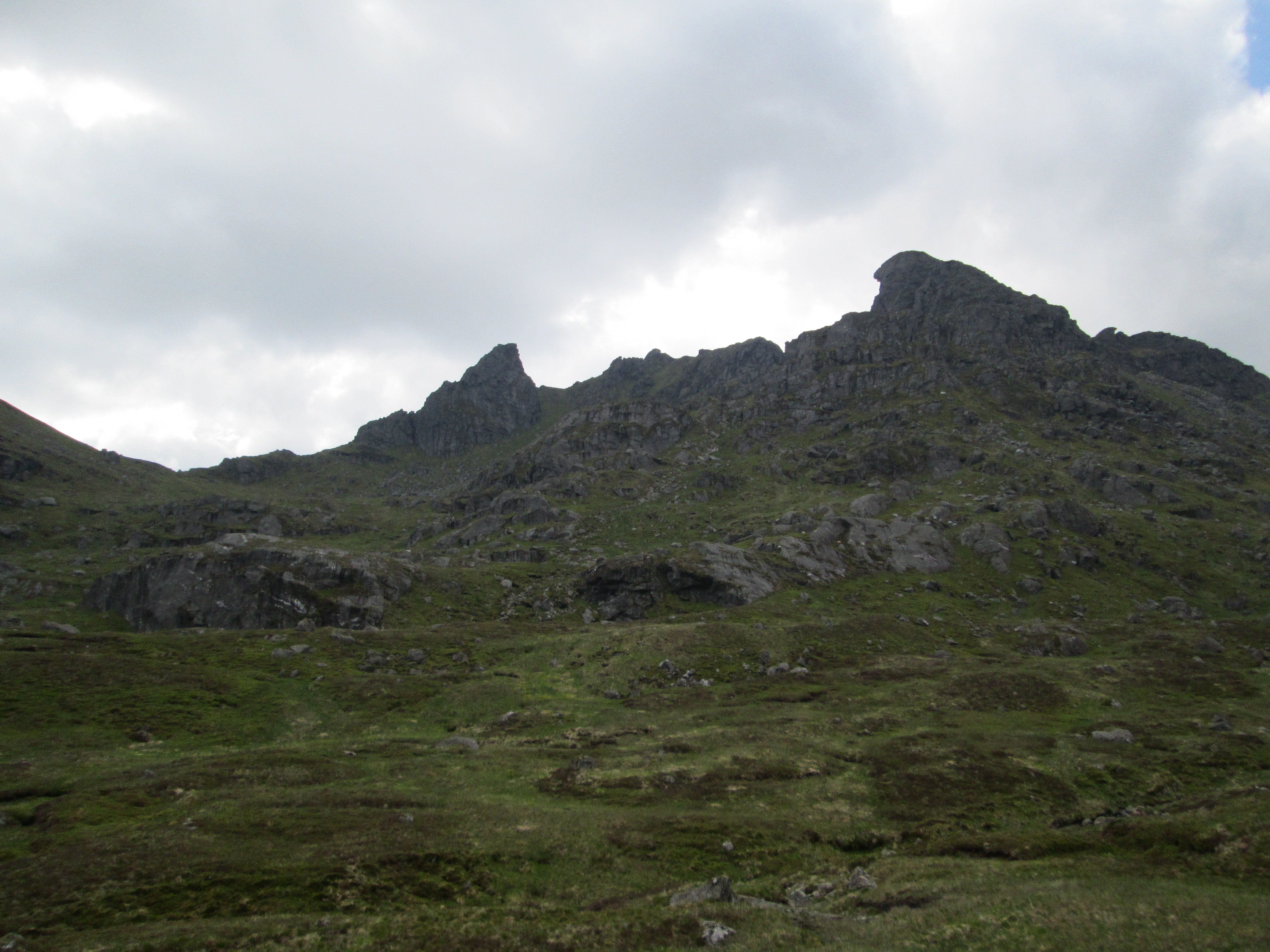 IMG_0528. Unfortunately my knee protests at going downhill, so it takes rather a long time to get down to the lowpoint of the path to Beinn Ime. The Cobbler looks amazing from any angle though! 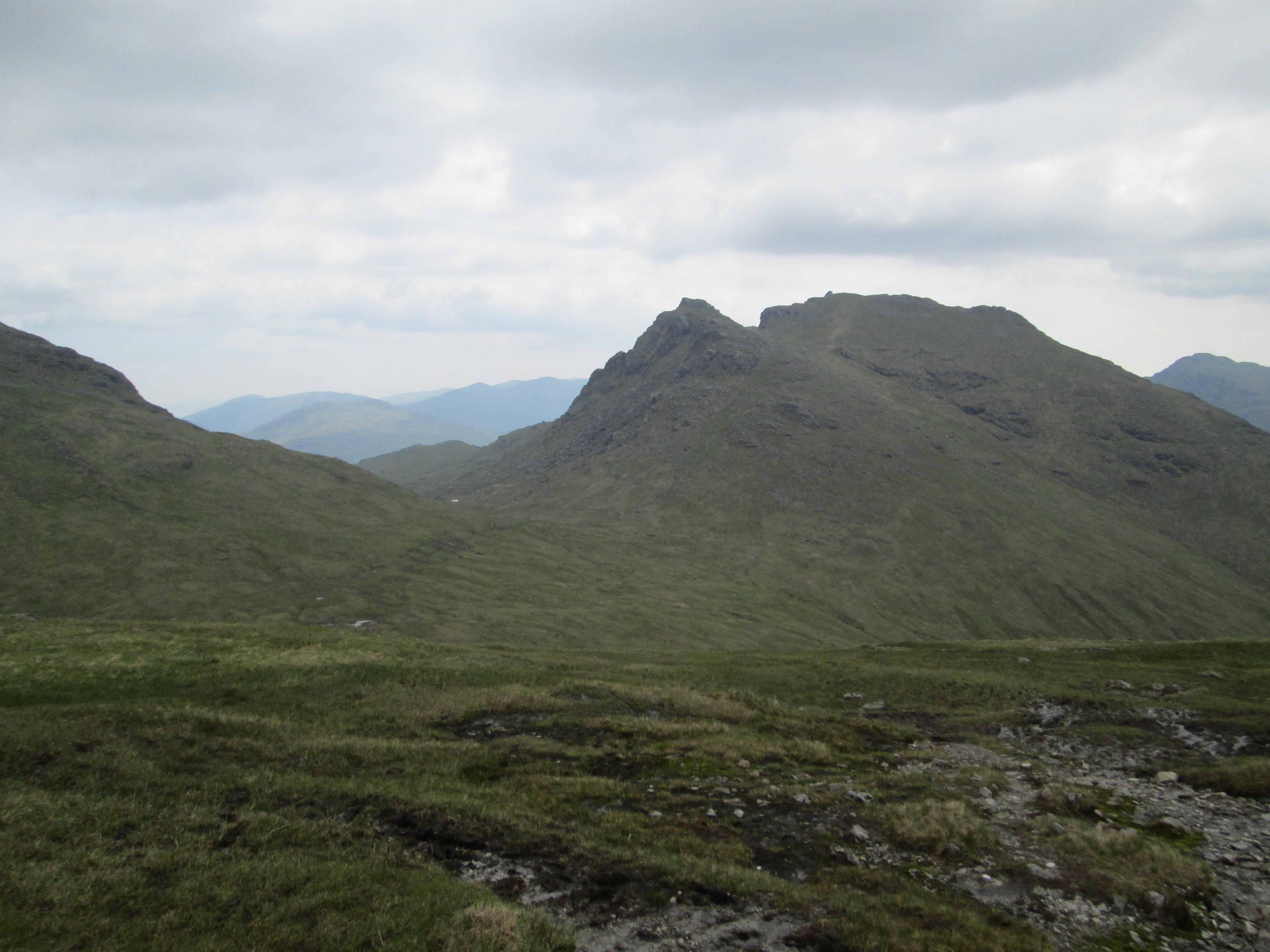 It's a pretty straightforward, if boggy, ascent to Beinn Ime. Just as we get there the breeze drops a little...
... signal to the beesties! 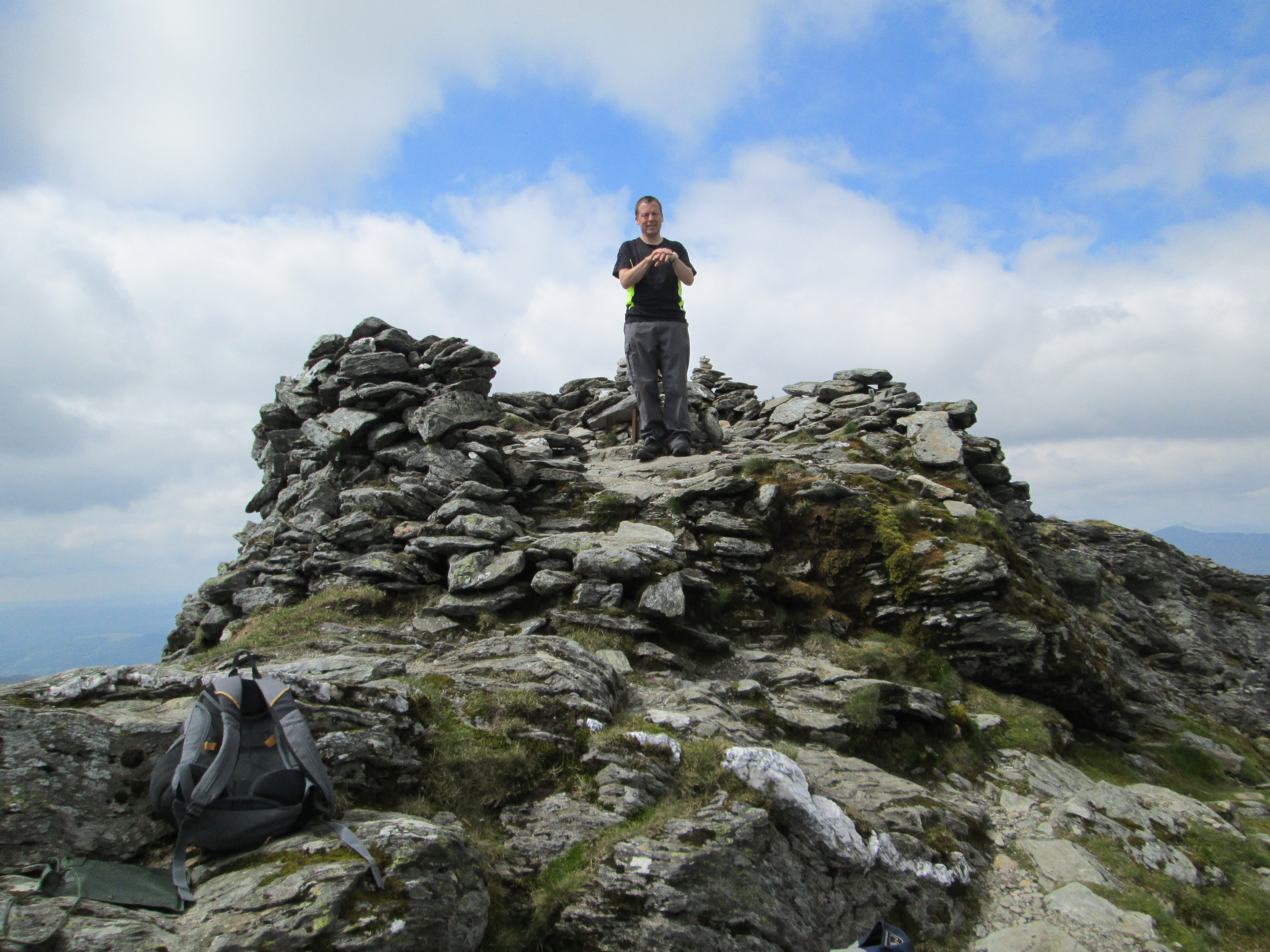 IMG_0526. Dr Frank trying to fend off midges on the top of Beinn Ime. 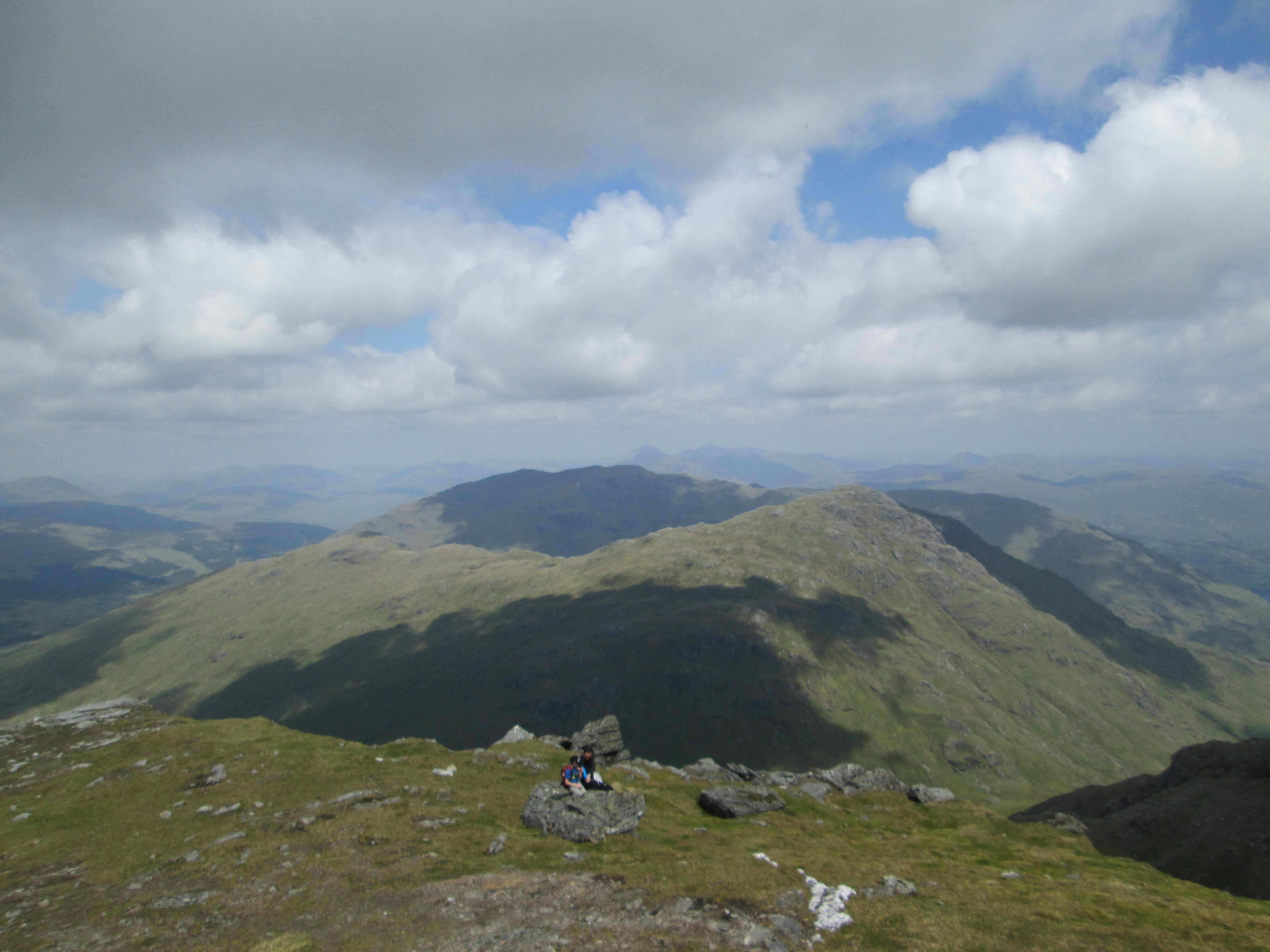 IMG_0524. The knee is increasingly protesting - we're going to have to come back to do this one... 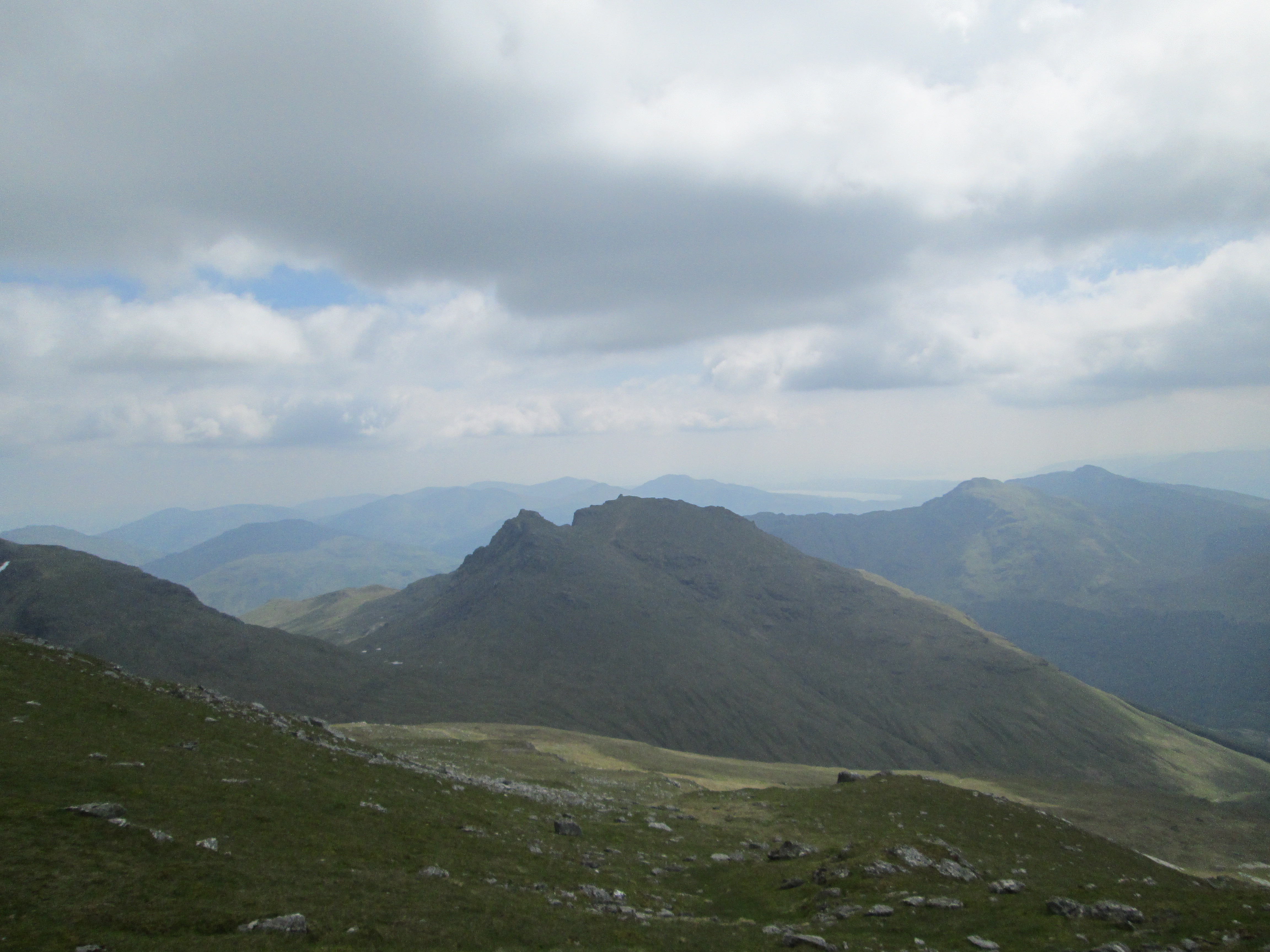 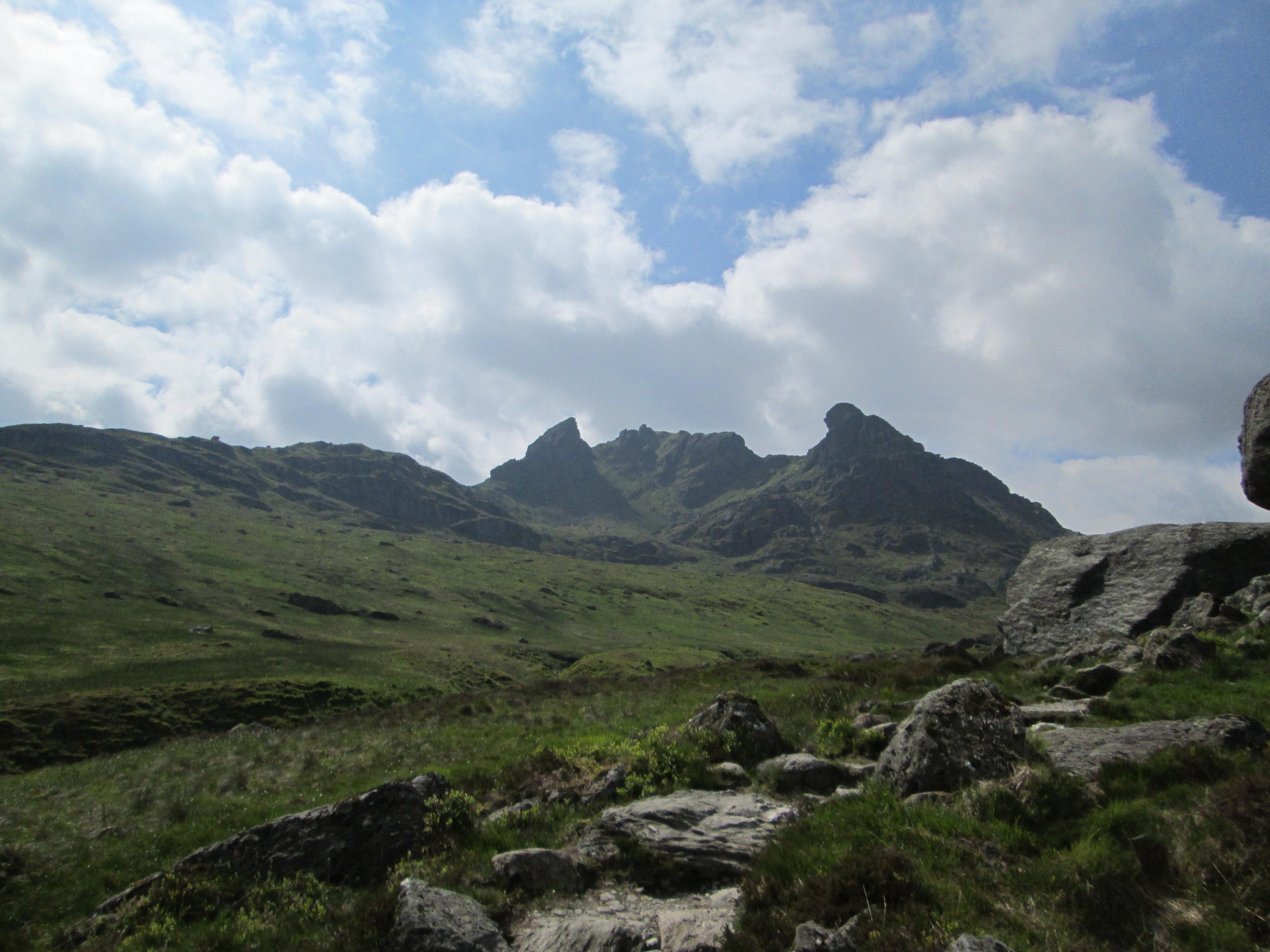 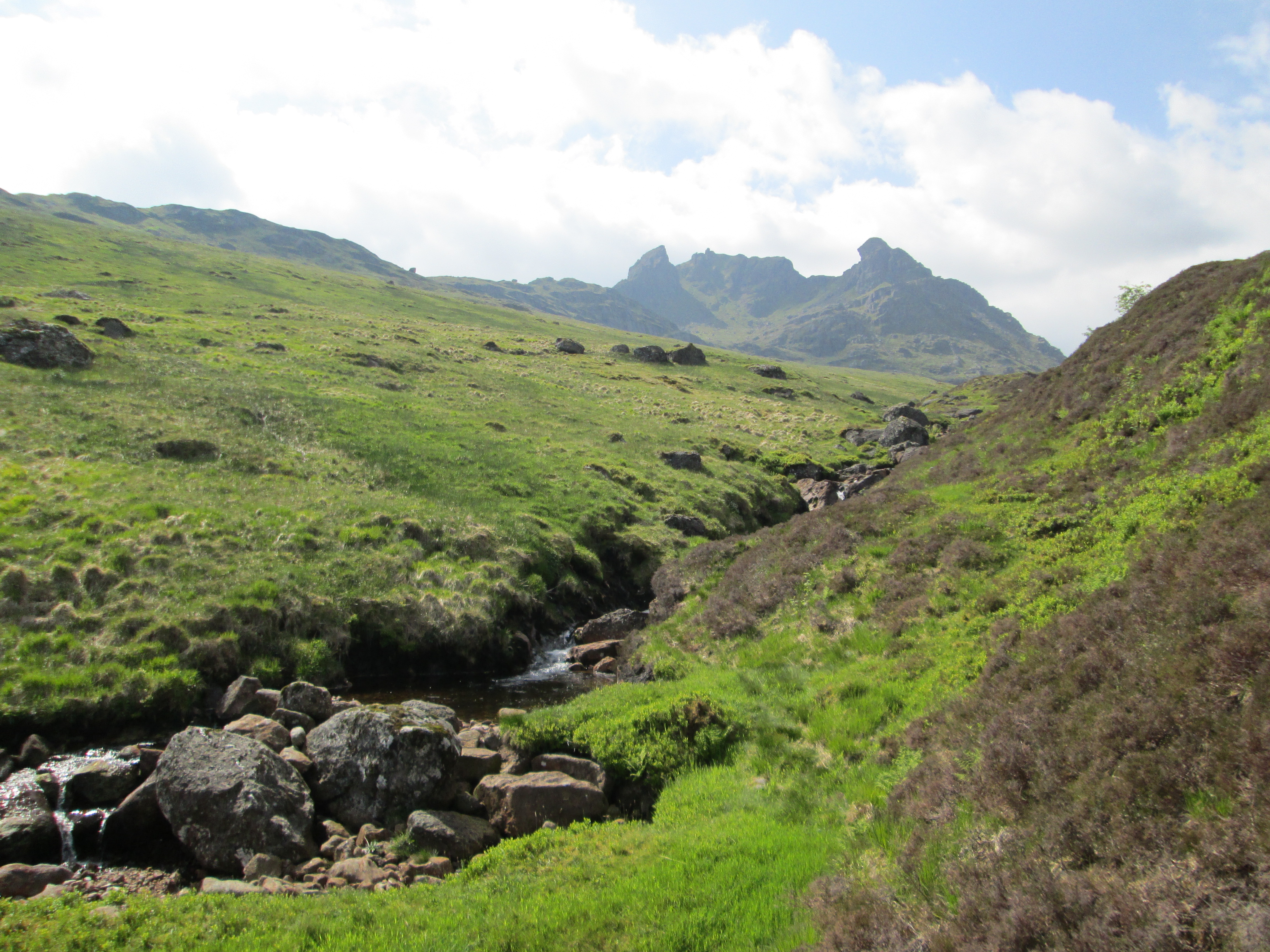 IMG_0530. What a mountain! Is this spectacular or is it spectacular??? 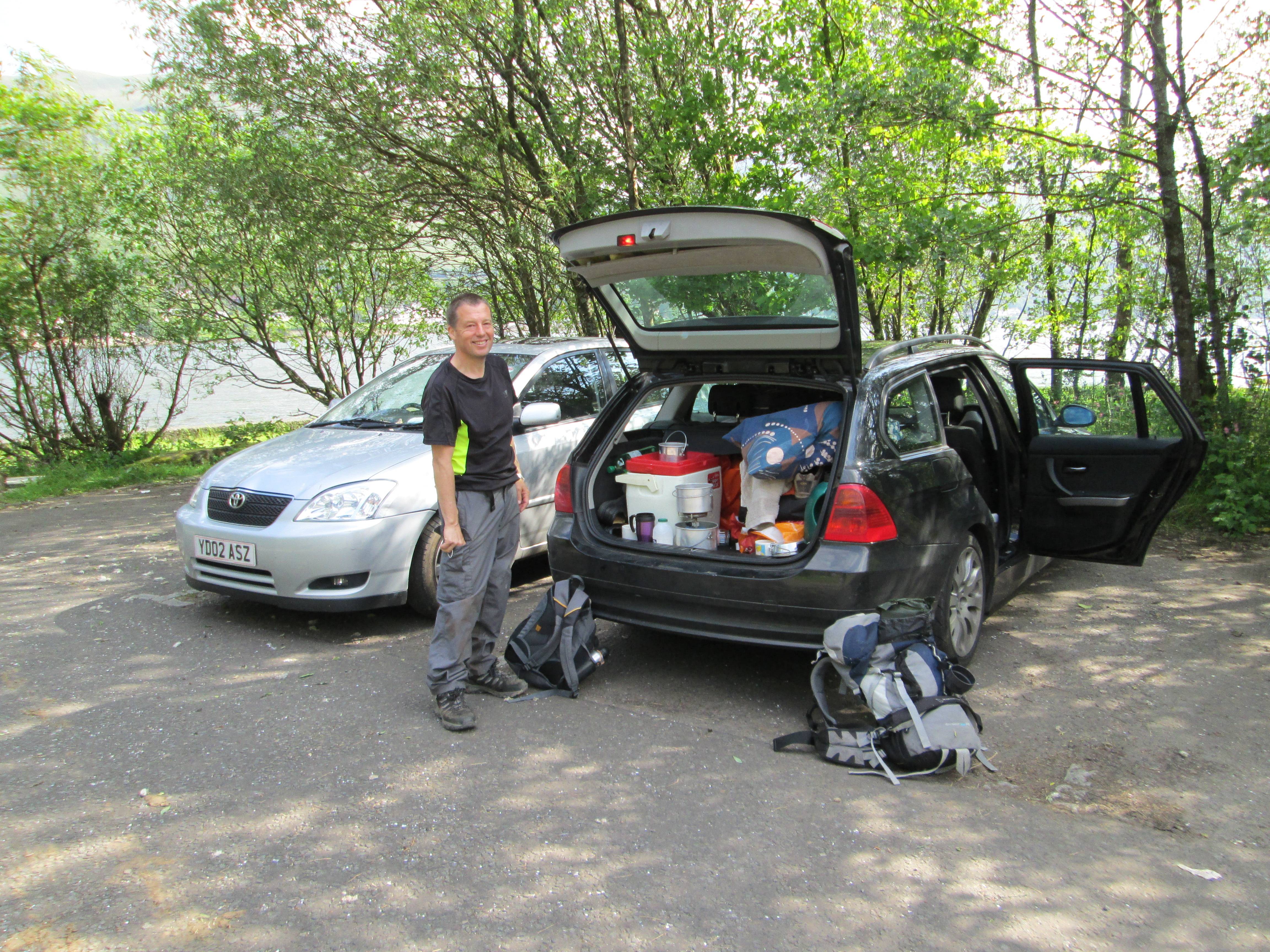 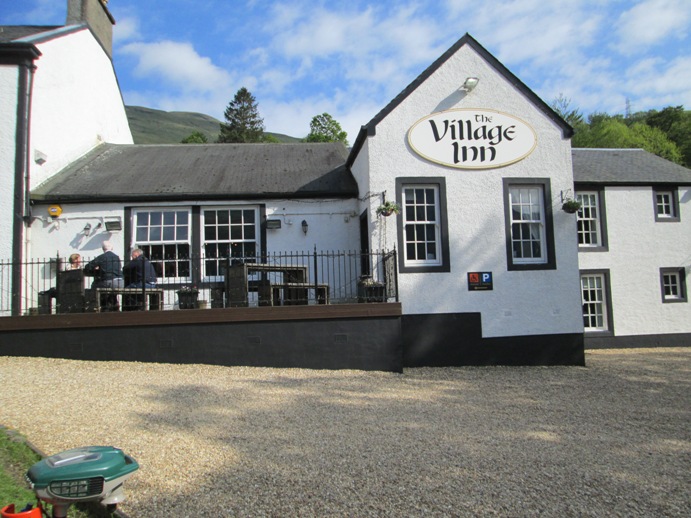 IMG_0532. ... and then onwards to a building of cultural, historical and architectural interest for some more intellectual pursuits...

Oh I agree that the Cobbler is a great mountain, which one has to climb at least once. Had to laugh about the comic pictures you used in the report - great idea!! That first picture is fantastic!!

something about ben arthur it draws you in ,i have done more than 20 times i love it,big plan buster though, allways plan A BIG DAY OUT driving from glasgow, get pashed off with the thought of a long drive ahead ,and hey presto turn into arrrocher,45 minutes later, BRILL!!!!!!!!!!!!!!!!!!! A BIG