We should have paid heed to the weather and the previous reports on this Munro on Walkhighlands as it turned out to be a real slog through the bog and swamp! As my friend David said en route "it's the muckiest mountain i've been on!"

Anyway we left Falkirk at 6:30am full of enthusiasm for the day ahead on Ben Challum, it was quite a nice morning and we thought a nice day for a walk. The closer we got to Crianlarich the greyer it became overhead and by the time we parked on the lay-by on A82 across from Kirkton Farm entrance it was torrential rain. It did look like a passing shower so we gave it 10 mins to clear then got ready for the climb ahead.

First section is easy up past the farm and across the railway line (is the second gate on the crossing always chained shut?) before heading of the farm tack and up the hill. The path is reasonably well marked until you get to the fence line and then its a case of folloiwng that all the way up. View down to Kirkton Farm from about 300 metre level

Then we continued up through the bog and swampy areas, it was relentless and never ending and very quickly dampened our enthusiasm. It was a lot wetter and muckier under foot than we had envisaged..... thank god we had good boots and gaiters! At times we had to take detours around the worst sections that were uncrossable in places. At least it wasn't raining though the cloud did spoil our view of the surrounding peaks. Ben More with snow and cloud at summit

There were spells of clear weather and when we stopped for a snack we got some good views of the neighbouring peaks. A break in the cloud!

Up through the never ending bog we trudged, even at higher levels we couldn't believe how boggy it was. Then we reached the first summit at 998 metres but the way ahead was in cloud, but then it lifted and we saw the summit across the ridge and off we headed to complete our climb. Time for a rest and snack at summit 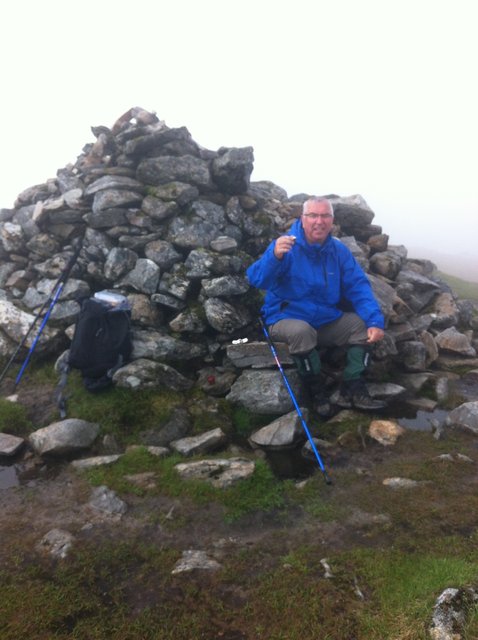 View back along ridge from summit

Got to say not our best day on the hills and we should have heeded the walk reports on this site, we have learned the hard way. Glad to have climbed "mucky" Challum but not one we would rush back to do.

Re: Bog Off! Mucky Ben Challum

Pity about your boggy experience - boggier hills can sometimes be better in winter when they're frozen over.....though I can remember doing a fair bit of sliding instead

- hope you enjoy the next one more - cheers