With the prospect of a wild camp, 2 long days and potential rain around Monar, we changed our plan to Glen Garry and a wee sweep up of 3 Munros. Packed up and offsky by 3pm to meet John at the dam at Loch Quoich.

We drove up the Kinlochhourn road, looking for a suitable camping spot but most seemed to be taken by fishermen, families, camper vans etc. but we eventually found a passing place with extra room perched above the burn, room for our 2 wee cars and a pitch for the tent across the road. fatal ,,this was apparently the same spot that the entire population of Scottish midgies chose for their weekend getaway too.

Once camped up,,we spent the next hour or two wandering around trying to avoid the little beggars.

Saturday morning, no big rush to be off and out early, so we decided since Sundays walk started from the dam, we would move camp back up the road. Packed up, drove down and set up again a short distance from the dam, hoping the open area would give us some wind to keep the midgies at bay. We then headed back up to the kick off point, for a 10am start, reversing the direction of the WH route to get the Gleouraich and its height in first.

Heading up from the road, you get the feeling you're in a private garden, lots of rhododendron bushes in bloom and the Allt Coire Peitireach running by.

Immediately on a good path, we zig zagged our way up the fairly steep slopes to Sron a Chuilinn, pulling round to the west, the views to Sgurr a Mhaoraich were fantastic and we could see the triple bumps we had negotiated in full snow less than 3 months ago. Up through the 'garden' Back down to Loch Quoich West to Sgurr a Mhaoraich

The zig zags certainly take the strain off the steep ascent and we were pretty soon up on the side of Druim Seileach. Skirting just under the top, the slopes down to our left opened out and we could see a lot of evidence of new tracks being built, hydro? wIndfarms? not sure but they are certainly very new and very obvious in the otherwise lush green landscape. With the views around in all directions, it was fun picking out the hills we had done, ones we still had on the radar etc. Rising on the stalkers path Reaching the North side of Druim S. at 814 mtrs, the path heads North East and with the summit cairn in sight, we sauntered up the slope with fab views to the North and the South Shiel Ridge, the great patch making short work of the remaining 200 mtrs or so. 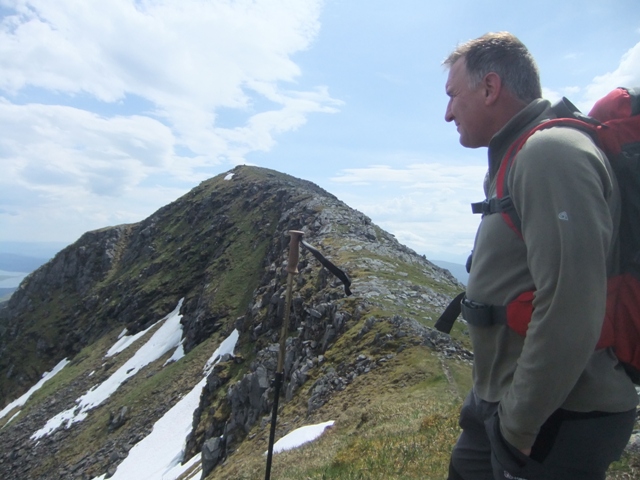 Breather before heading up to the first summit of the day Top of Munro #88, on a glorious day. (whats more,,reports from home were of torrential rain hehehe) The views East takes your eye over several corries dropping off to the North with green gentler slopes heading South and on to the next summit, Spidean Mialach in the distance. Its a long way down! Smashing ridge over to Spidean

The good path stays with you here as it rises and falls over the top of the crags. Reaching a mid point on the crest at Creag Coire na Fiar Bhealaich, we stopped to build a small cairn on a high rock, something to look out for from Maol Chinn-Dearg on the South Shiel Ridge, directly ahead of us to the North. (amazing how hard it is to find random loose rocks on this rocky hill lol) Heading off and looking South, into the bowl of Coire Mheil we saw the only other person we encountered on the hills today. A lone walker on his way down towards Loch Fearna. John and the wee cairn Pretty soon, we came to the start of the steep descent down into Fiar Bhealaich itself, losing some 300 mtrs before rising back up to the edge of the crags around 900 mtrs and following on round and up to the second summit at 996 mtrs with its cairn and small shelter of stones. It had been gusty at times on the way up with jackets on and off as the temperature rose and fell, it was nice to sit down in the shelter, out of the wind and still be in t-shirts. Spot of lunch, few snaps and a short discussion about our descent. We considered heading down to the South East and towards our camp, where we could pick up my car and drive up to the start point to collect Johns, it looked a fairly easy going, grassy route. But then, there was the route we had seen the lone walker taking, to the West of the lochan and down to nearer the start point... hmmmmm decisions decisions. Heading off down to Lochan nan Fearna

There is a path heading East and down round the hillside but we eventually decided to drop South and head towards the campsite, then we changed our minds and headed for the lochan, pretty much immediately after, we went back to plan A, quickly followed by a u turn to plan B. The lochan it is. Knowing it would be a lot boggier, we could see the peat hags and burns from up here, we just decided to head down.

As expected the bogginess was pretty constant, but we were heading down and had dry boots for tomorrow. Near the bottom we were able to pick up the path again and followed round and down to the new built stony track which would take us down to the road again. VERY steep track and brought out the old knee issue, downhill can be a total bummer! Back to the newly built track

Back to the road, wee 10 minute hoof back up to the car. Total time out, a little over 6 hrs. Very happy with that. A lovely wee spot on the road back to the car

2 smashing hills, nothing eventful, no difficulties, nothing even particularly steep, just a lovely day. Seeing the entire route from Gairich the following day, you get a better idea of what a terrific walk this was.

Mentally scarred some D of E kids passing by lol

.........oh and p.s. The wind dropped, the midgies followed us down the road and yes, we had another night being eaten alive!

Nice ascent on the zig zags to first munro.

Bit like which pub next on a night out that descent

Great day for it and nice spin to Kinlochourn

Another good report Gill done them ma self lastyear

had no pals then

as you say they are two good hills.

had no pals then

as you say they are two good hills.

Awwwwww Wullie no mates lol at least you have some partners in crime now. Fab weekend indeed. See you out on them there hills soon, (or over a Saturday night vodka