Waking from another night of being the main course for about 3 million midgies, we took advantage of a slight rise in the wind blowing the little blighters away and used the time to get up, clear camp, have breakfast and pack up before heading off for our 3rd Munro of the weekend.

Camping up from the dam, we had full views of todays hill and the gently sloping shoulder leading up to it. Parking at the dam, we were ready to go by 9am. The rain from last evening had stopped sometime overnight but there were still threatening clouds around, with Gairich itself hiding under a misty cap. There were a couple of vehicles already in the parking area so the possibility of others being out on the hill today. Setting off for the dam

The reports for the hill are that the early stages of the route are very boggy and they're not wrong. Heading over the dam and through the small gate to reach the path, we skirted close to the waters edge and pretty soon started jumping puddles, squelching through peaty mud and generally sliding around. There is a good clear path here that's easy to follow but keeping your eyes to the ground is vital or you will end up knee deep in muck (yes,,it happened!) Heading away from the waterside to Lochan an Fhigheadair, the path remains on level ground. John had the GPS but we didn't have a map of this one, but having checked the books, it was a straightforward route over to the trees, turn right and walk!

The hill remains in view for pretty much the whole walk, apart from where the path drops down into Bealach na Faire to the trees. Reaching the forest on our left, we passed through a gate and down to a heavier wooded area ahead. There is a path up to the right just before the gate which turned out to be our return route.

At the trees, you start a short climb up a much drier and rocky path, reaching around 350 mtrs before attaining the flatter area of Druim na Geid Salaich. The path then simply heads for the hills (well, hill

) You gain around 230mtrs from here but over a long distance so its very easy going. The path occasionally disappears into much bogginess but is pretty visible ahead so it's easy enough to pick it up again. With good visibility, we had no issues, this however would be very different in poor visibility or snow. Looking back to yesterdays day out Brightening skies to the West

Early on this stage, around 10:30am, we met two gentlemen heading off. We could only assume the had a very early start or had just been out for a stroll lol

Looking to the North, we could see the full range of yesterdays walk on Gleouraich and Spidean Mialach, and Norht West to Sgurr a Mhaoraich. Nevis to the south was cloudless for the second day running. Our target for today, Gairich, appeared and disappeared under a cap of cloud but with only the odd passing shower, with warm sun in between, we knew we wouldn't have any issues and hoped the cloud would clear for some summit views.

I'd had a couple of little twinges on my knee, following the steep track descent yesterday but kept it stretched and fingers firmly crossed, on we marched.

Now, at the time, my immediate reaction (under my breath of course) was AYE RIGHT PAL!!! but I have to admit, the niggling inner voice of the simmering Munro Bagger was saying "YAS! ANOTHER ONE! must need my head examined.

Sun cream on, waterproofs on, sun cream off on to the lining of waterproofs, no more applied. Broken sunglasses and itchy midge bites, perfect day really. A quick stop and John realised the top zip of his rucksack was open and guess what? no gps!!! arrrrgghhhhh,,, a few mins cursing, followed by a "hold on, I moved it when the rain started" panic over, was in the main rucksack compartment.

We got to the bottom of the hill itself at about 11:15am, height check 586 mtrs and summit at 919 mtrs. The path zig zags its way up, some long flattish sections covered before it gets a bit steeper with some great short and easy scrambles. Timing our ascent for this last push, we cleared on up to Ceann Samhraidh where the path arcs to the right and round some smashing crags to the North. On the rise on the good path Having a breather (or more likely, waiting for me to catch up!) Looking back down the zig zags 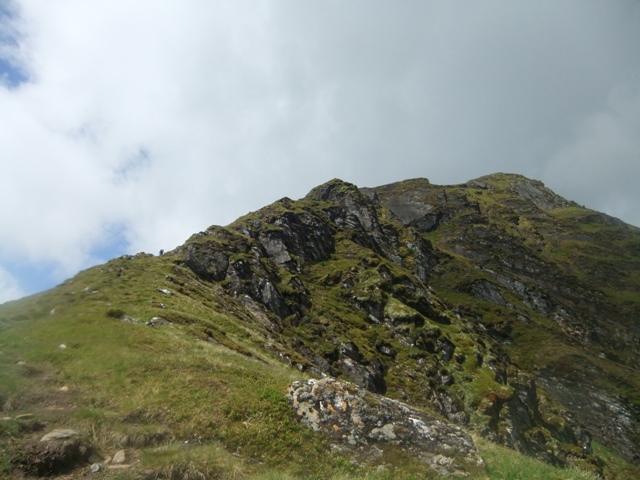 Up to the last push to the summit, (Johns in there somewhere) Sgurr a Mhaoraich to the North

The wind got quite gusty here out of the shelter of the hillside but with no bite in it, no need to layer up. Quickly after, reaching the summit cairn at 919 mtrs, I timed it at about 45 mins for me, a few minutes quicker for John, nothing new there then lol Wandering around the summit

By now, any cloud that had been hanging around was gone, clear views all round, except for that dodgy looking area of rain off to the South West, eyeing it suspiciously, John took a wander off across the flat topped summit to check out the Sgurr Mhor option. Returning, he advised it would involve a descent more or less back to the loch, before gaining the full height of SM and then a very long return walk. With the grey area of weather now confirmed as heading our way, we opted to leave this one for now.

Lots of fab pics taken and off we headed for the return by the same route. As ever, the knee plays up more on the downward stretch and pretty soon it was twingeing away. Thinking I would take a couple of painkillers, hoping they would kick in before the pain got worse, but ever the bloke, John suggested I don't bother with them. ITS MY KNEE!!!! (turned out he was right as by the time I was on the shoulder, no pain) Scrambling down over the rocks and bathed in sunshine, our 45 min ascent took as 30 mins to retrace.

With John stopping to admire the view, ahem! I marched on, losing the path in a section of bog, I eventually picked it up again and headed on. As John caught up, I realised, I'd lost it again (the path that is). We were losing height quickly so headed South a bit to pick up the flatter section and eventually the path again too. Nice uneventful wander down and staying mostly dry underfoot until we dropped down just above the trees again. Only the odd shower of rain, enough for waterproof jackets but never really coming to much.

Back to hopping, skipping and jumping over, through and round many puddles, burns and bogs. We pushed on. Meeting up with a couple not far from the dam, Greek chap and his Japanese wife, all the way from........... Swindon.

up on holiday with there wee dog, who really wasn't sure about me but took a shine to John lol.

The first prolonged heavy shower started just after this but we were only a few minutes from the dam, so while John got the jacket back on for the umpteenth time today, I just strolled on, actually enjoying the rain, nothing cold today, so it was nice and refreshing. Had a dry change back at the car anyway. Back up to a fab wee hill

Another cracking day, on a fab weekend. Lunch at the Invergarry, top up with fuel and back off home.
Seriously,,what else are weekends for?

Re: Gairich, land of sun and showers

From your previus day and this one, looks like a good couple of days up here - lets you get immersed in the area......or may be more like immersed in midges

Bit boggy it was, well after loosing my watch and porch poles last few weeeks, didnt want to lose GPS as well.

Sorr Mhor would have being a decent hill to come back other way, probably would have gone for it on the Saturday with good weather and lots of time to kill.

another good weekend for the both of you then.

Looks like you had a great couple of days there, Gill. The mighty midge is the scourge of the Highlands, though, and are particularly numerous and vicious this year! Boo hoo

Getting close to the three figures milestone

Hope to get out soon, but the midge reports in the west are not a great attraction