I had wanted to do this particular circuit for some time and with a few days of the Easter holidays remaining, and the weather looking fine for the next couple of days, I seized my opportunity. Packing enough supplies into my 65 litre Vango for a two day man plus dog expedition with an overnight in the Lairig Leacach bothy, Lucy and I set off up the A9 and then along the A86 heading for Fersit. A dog break at the Hermitage and a man break at Dalwhinnie later, and we were pulling into the large gravelled area just before the Dubh Lochan on the minor road into Fersit on the stroke of midday.

The plan was to head over the Munros of Stob a’ Choire Mheadhoin and Stob Coire Easain before overnighting in the Lairig Leachach bothy in the shadow of the Grey Corries before returning the next day over the twin Corbetts of Sgurr Innse and Cruach Innse and the relatively unheralded Graham of Cnap Cruinn. I also had vague notions in my head about fitting Stob Ban into the equation too, either an evening ascent to catch the sunset (with descent in the dark) or a very early morning ascent in the dark to catch the sunrise. I guess we’d cross that particular bridge when we came to it! We headed south west past the lochan and up the surprisingly boggy hillside onto Creag Fhiaclach. From here the climb levels off for a while, and the views really open out, with Stob Coire Sgriodain backing Loch Treig to the left and the mass of the Grey Corries away to the right. Some distance ahead is the first major obstacle in the form of the intimidatingly steep looking Meall Cian Dearg, with the summits of Stob a’ Choire Mheadhoin and Stob Coire Easain peeking out from behind.

The climb up Meall Cian Dearg turns out to be quite a strenuous one, with a big overnight pack on my back for the first time in four months. Still, it’s good practise for the fast approaching Duke of Edinburgh season and as I climb higher, I am rewarded with fantastic views back down over Glen Spean. On the broad, barren and rocky ridge beyond Meall Cian Dearg, we stop for lunch before continuing up the narrowing ridge and into deeper patches of snow as we curve around and over the subsidiary top above Coire Aluin and the trench of Loch Treig way below to the left. 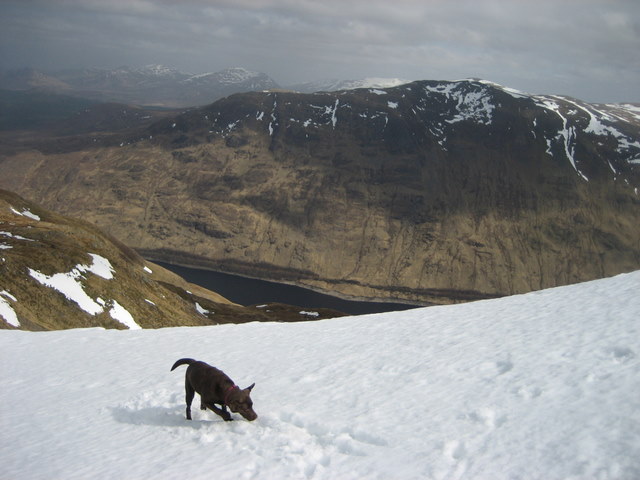 Back over the 978m Top to the Creag Meagaidh group, the two Binnein Grahams above Lochan na h-Earba and the three South Loch Laggan Munros Final pull to the summit above Coire Aluin

The summit of Stob a’ Choire Mheadhoin is a breathtaking viewpoint on a day like today and we spend a good ten or fifteen minutes soaking it all up in every direction before continuing south west down steep slopes to the bealach. North west from the summit to tomorrow’s Corbetts and Graham It’s another fairly steep haul up onto Munro number two of the day, but there are absolutely no complaints whatsoever from me. After all, this is what it is all about - a perfect spring day in the vastness of the mountains with only the dog for company and not as much as the slightest hint of another human being anywhere in sight. Sgurr Innse and Cruach Innse from the bealach

Again, the summit panorama from Stob Coire Easain is absolutely stunning in all directions and another quarter of an hour or so is spent just lapping it up before tackling the steep, loose scree slopes to the north west that lead down towards the elbow of Coire Laire in the shadow of Sgurr Innse. Lucy tries to play hide and seek behind the summit cairn Playing with the timer again! Looking back to Stob a’ Choire Mheadhoin Once at the foot of the north west ridge of Stob Coire Easain, the terrain flattens off into a broad expanse of dry scrub grass dotted with little puddles and extensive rock slabs, some of which drop away into shallow clefts before climbing back up onto the plateau again. This actually turns out to be my favourite part of the walk today, the mountains on all sides towering over the flats and giving a real sense of isolation and solitude. Lucy contemplates the fine rock architecture of the Sgurr

I am walking more or less on a direct bearing I have taken on the bothy, and as the flats end and begin to drop away into the Lairig Leacach, the bothy comes into view below. We pick our way down the heathery slopes and as we do so, I spy my first sign of human life form since turning off the A86 over five hours earlier. I keep an eye on him/her as he/she approaches the bothy from the south and as we descend, he/she decides against wading across the river and decides to detour the short distance to the footbridge.

When I reach the bothy I meet Phil from Luton, a fellow teacher enjoying the Easter holidays in the Scottish mountains. He has flown up to Glasgow before taking a train to Corrour and is slowly making his way to Kinlochleven to catch a bus back to Glasgow.

The bothy is smaller than most I have stayed in previously but is well equipped with a fire (which we do not feel the need to press into action), basic furniture and two large raised sleeping platforms, onto each of which up to half a dozen people could probably squeeze if necessary. Phil opts for the top bunk while I get the lower one. No doubt Lucy will end up on there too as I can tell she is less than impressed with the look of the rough concrete floor. Welcome to the humble abode

We share an evening of conversation, a can of lager and attempts to keep Lucy’s nose out of our respective dinners before he heads out into the encroaching gloom to indulge in some time-lapse photography and I call it a day, setting my alarm for 4am just in case the urge is still there to climb Stob Ban for sunrise!

Coming soon: Day 2 - The Corbetts and the Graham.

I did SCaM on a dreadful Winter's day and wondered if I could go on to the next one before I decided to turn back - it looks tantalisingly close.
However, your report convinces me that a walk into the bothy from Corriechollie (sp?) is the way to go and a Munro-Corbett couple of days could be excellent reward. Look forward to the Innses report!

That dug will be ko'd before long.

I did SCaM on a dreadful Winter's day and wondered if I could go on to the next one before I decided to turn back - it looks tantalisingly close.
However, your report convinces me that a walk into the bothy from Corriechollie (sp?) is the way to go and a Munro-Corbett couple of days could be excellent reward. Look forward to the Innses report!

That dug will be ko'd before long.

I see that education you received up in Ellon hasnae been completely wasted! The old French teacher with the wing mirrors obviously did a decent enough job!

It is tantalisingly close, but it is a steep old haul up to SCE. Lucy barely moved for the next two days after we got home!

Looking at the 2 ledges on your photos of Sgurr Innse on this post, which ledge did you use? the upper or the lower? Were there any difficulties on the way round (i.e. narrow bits with a drop off)?

I'm surprised you took the steep descent route off Easain if you were heading to Lairig Leacach bothy... I went along the summit ridge (between the ascent ridge and your descent ridge - don't know the direction as I'm mapless at work)... that narrowed pleasantly for a while and then gradually descended down the back towards the bothy. I wasn't actually supposed to be taking that route but didn't fancy the steep scree one... I was originally supposed to be heading back to Fersit where my parents and Richard were going to pick me up after their day trip in the car. I had to text them and tell them to pick me up at Corriechoille instead.

Kev - it's a very short hop between SCaM and Easain if you're up there in a mist again next time and well worth it...

I would have gone on, MC but my walking partner was a little worried and I didn't want to unduly worry him anymore than he was. I'll be glad to bag it from the bothy/wild camp this summer hopefully.