I wrote this report a few weeks ago, right after it happened, and have kept changing my mind about whether to post it publicly. But as I’ve often been both entertained by, and have learned a thing or two from reading about others’ trips that didn’t go quite to plan, I’ve decided to man up, and pay it forward.

It was the second day of the walking part of my holiday week, and I was feeling pretty cheerful.

I'd met and walked with Fife Flyer the previous day, and we'd had good weather, nice views from the top, and an all-around (Mt) Keen time. As I drove through Deeside, I was thinking about the day ahead, meeting my friends in Dunkeld later for an early dinner followed by an open music session at the Taybank, and my plans for the rest of the week. I’d realized the night before that the description I’d printed long ago (not from the WH site), was for the An Socach on the Mullardoch round, not the one in Braemar (really, there should be a rule against multiple Munros sharing the same name

). But no worries; I knew where the parking spot was, and FF had told me that the route was straightforward: “head up the glen, eventually cross the river, and start up the hill.” (NB: I am in no way implying that FF is responsible for, or suggesting that he contributed in any way to the stupidity that follows.) So I parked up, grabbed my gear, and head up the glen. It was another lovely day—two in a row; how often does that happen, especially when you’re on holiday? Life is good, as the t-shirt says.

So over the river I go, and up the hill. There are bits of path here and there, but no clear single route. I’m not worried; there’s good visibility, and after all, I do know where I’m going. Climb, climb, climb, views opening up, I’m havin’ a grand time. Ah, there’s the cairn, and no more “up”; therefore, I must be at the top. Gosh, that was really quick; no false summits? That’s unusual. Checked my watch; I’d made good time. That’s unusual as well. I drop the rucksack, take a few photos, and have a glance at the GPS. Hm, that’s odd, I’m about 100m short of a hill (much like being a few sandwiches short of a picnic, you might say

). With a glance at the map—far too little, far too late—I realize with a combination of dismay and amusement, that I am Not.On.An.Socach.

If you’re feeling the urge to scold me at this point about the importance of always knowing where you’re going, where you are, general navigation, etc., etc., believe you me, I know. I KNOW.

I could have made my way over to An Socach from where I was, but instead decided to have a shorter day than planned, and made my way down Sgor Mor. I’d enjoyed the walk, and had been to the top of a nice hill that would probably otherwise never have made it onto my radar; the only slight regret was my own silly carelessness. I sat by the river and had a snack, then started feeling a bit restless. I’d had a pretty decent ascent workout, but hadn’t covered much distance. And it was still early (sort of). So I decided to have a wander up the glen to see a bit of what I’d missed by not following the correct route. I crossed over the (correct) river, and when I saw the cairn marking the (correct) path up the hill, decided that I’d follow it up, for “just a short distance.” When I reached the tall cairn at the foot of the southeast ridge, the next goal—the ridge leading to the first/eastern summit—looked very close, and it seemed a shame to not carry on “just a bit further.” Yeah, ok, by this time, I wanted to turn this balloon blue, so I called my friends from the ridge between the two summits (there's a good signal there, fyi) to tell them to go ahead and have their dinner, and that I’d meet them later in the pub.

By this time, it had gone a bit cold, and very windy, and I hurried along to bag the (correct) summit. Then I hurried back to the slight dip between the two summits, and headed down that path, boggy in places, to meet the top of the farm track. Hurried back through the glen, hopped in the car, and hurried my way over to Dunkeld. It’s funny how a short(ish) walk turns into hurry, hurry, hurry when you preface it with going both up, and all the way down, a whole other hill. 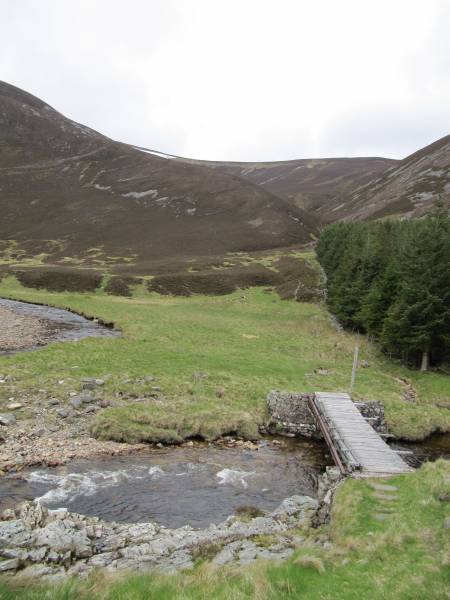 not the right bridge 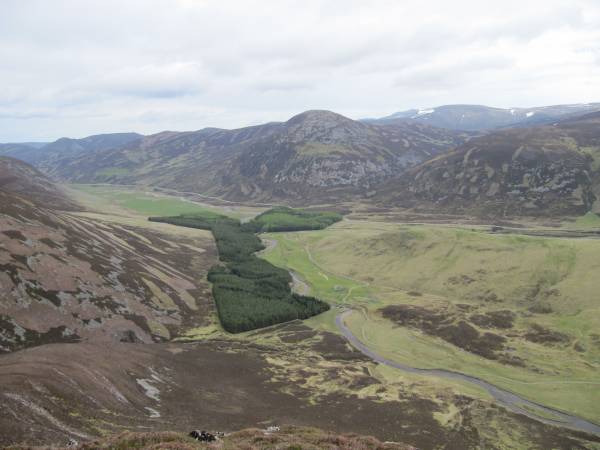 not the right view 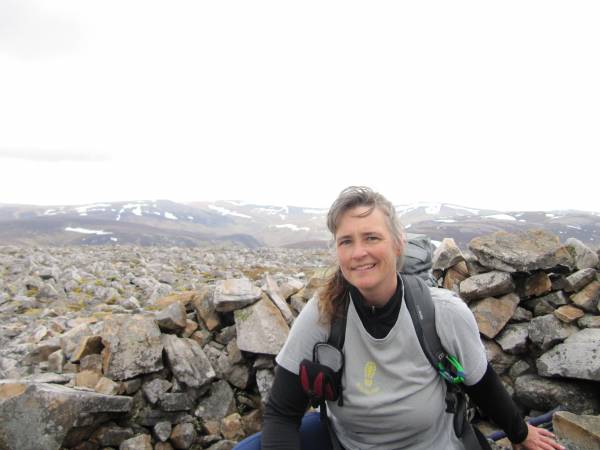 NOT evidence of a successful Munro summit

Very easily done if your not forever checking that map. Lesson learned now, but that's what it's all about, you won't do it again now. At least you made your goal in the end and got your blue balloon, no only that you know something about a hill you knew nothing about beforehand.

enjoy your next visit to the hills

Well done Karen for not giving up, I don't mind taking the blame

One excuse, the weather when we bagged it was a wee bit different, windy & snow above 500m

See you tomorrow, hopefully we will go up the right hills

I have a map, compass & the trusty WH route printed out

I've done it, we've probably all done it! I will probably do it again - At least you noticed. There will be someone out there that is convinced they climbed a hill but they were on the wrong one and didn't notice

Maps are great indoors but a bit of a pain on a wet, windy hillside - not that you had those conditions on this occasion. well done on the bag