Outside Scotland first-Crib Goch and Snowdon from Nant Peris

Outside Scotland first-Crib Goch and Snowdon from Nant Peris

Since joining this forum last November, I've been churning out a fair few Scottish reports, but little else. Having grown up on Anglesey, I have spent a lot of time in the Welsh hills, but very little since getting a digital camera. An April visit back to my parents gave me the chance to rectify that. As it was mainly a chance to catch up with friends and family and help with DIY, I decided on an early morning walk for this one.

our_route.gpx Open full screen  NB: Walkhighlands is not responsible for the accuracy of gpx files in users posts
At 7.45am I was walking down the road from a layby to the climbing hut at Ynys Ettws, having only taken 25 minutes to drive over from Anglesey. The morning was cold, but the sun was out and it looked to be another glorious day. The cwms on this side of the Llanberis Pass are impressive enough to rival anything in the Black Cuillin or Glencoe, with multiple tiers containing little pools and waterfalls cascading between them. The sunshine was on Cyrn Las, making this the obvious ascent, but I couldn't remember the best route onto the N ridge of Crib Goch, so decided to do this in ascent rather than try and find it on the way down. I climbed into Cwm Glas Mawr then followed the stream up to Llyn Glas. Wish I'd checked the climbing guide for the area, as I've forgotten most of the crag names up here. Taking this route avoided the dripping overhangs of Dinas Mot, as well as a smaller (also dripping) crag to the W. The route next to the stream was straightforward, with the occasional requirement to put hand to rock.

View opens up into Cwm Glas: 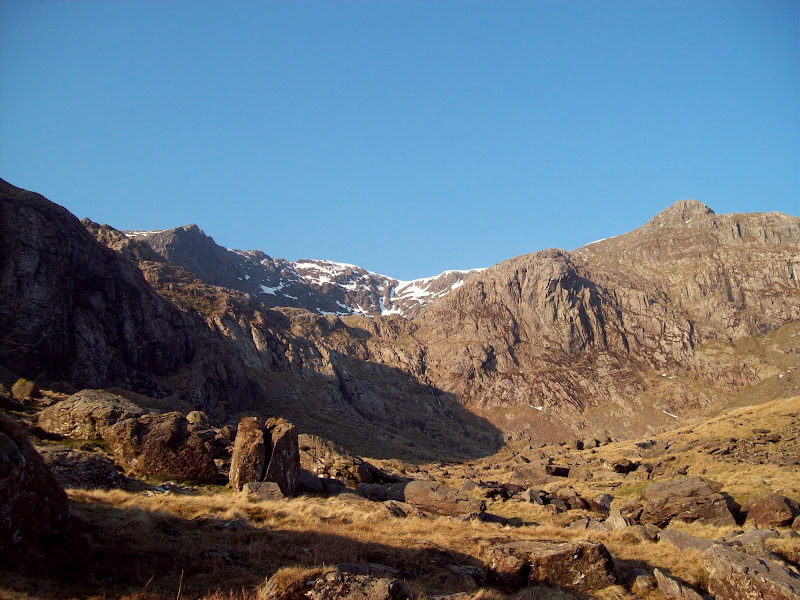 Looking across to Cyrn Las: 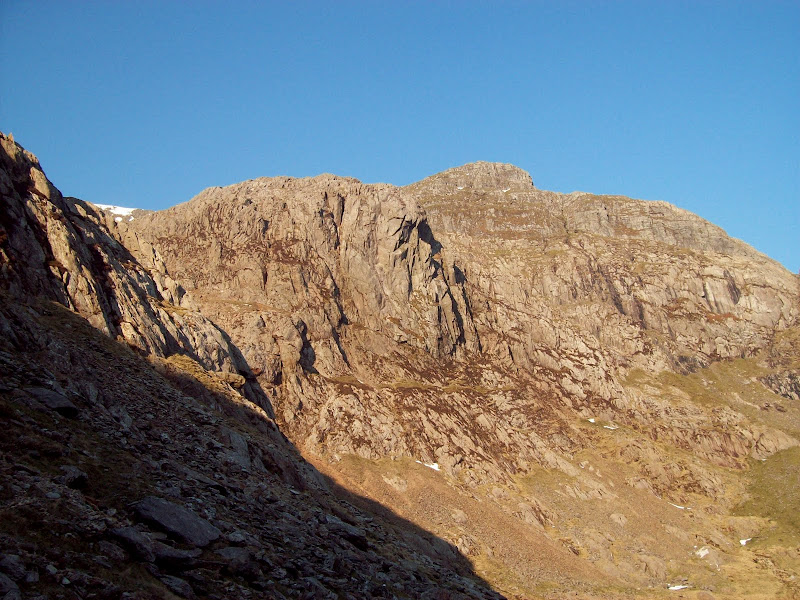 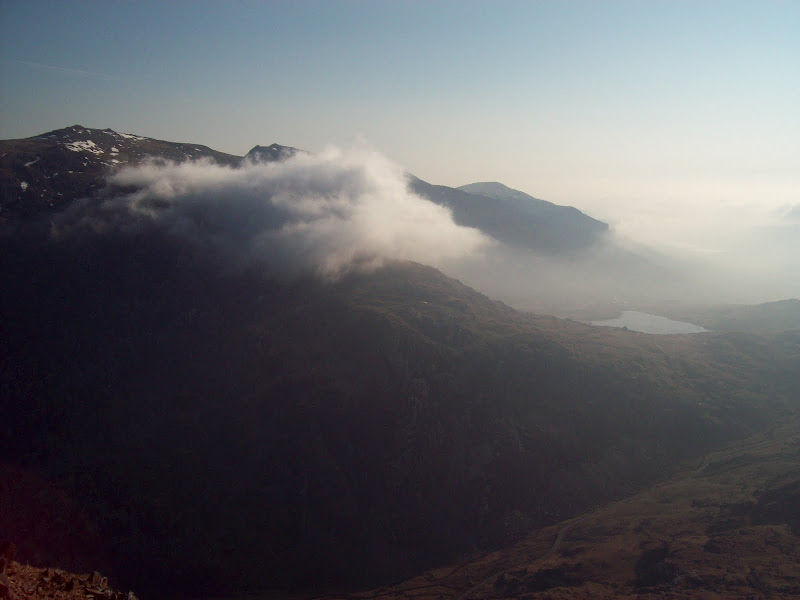 The faint path petered out, and I made my way across grass and rock to the scree slope at the N end of Crib Goch's N ridge. 80 m or so of loose scree led up to the end of the ridge proper. This is a great prelude to the Crib Goch summit ridge - sharp but with gentler slopes on either side. The crest of the ridge can be followed easily, but the breeze was rather cold so I mainly stuck to the W side, only joining the crest for the final steepening. As I had hoped, the snow was only window dressing in the cwms, and didn't affect my route at all (I only had trainers on, not wanting to lug my boots down from Inverness on the train).

Looking up the N ridge of Crib Goch: 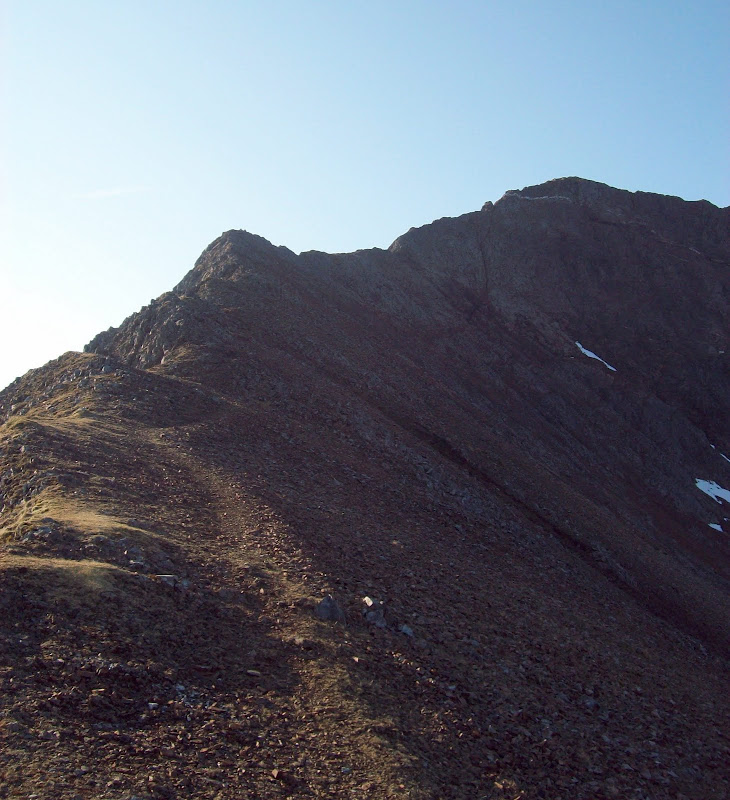 Steepening on the N ridge: 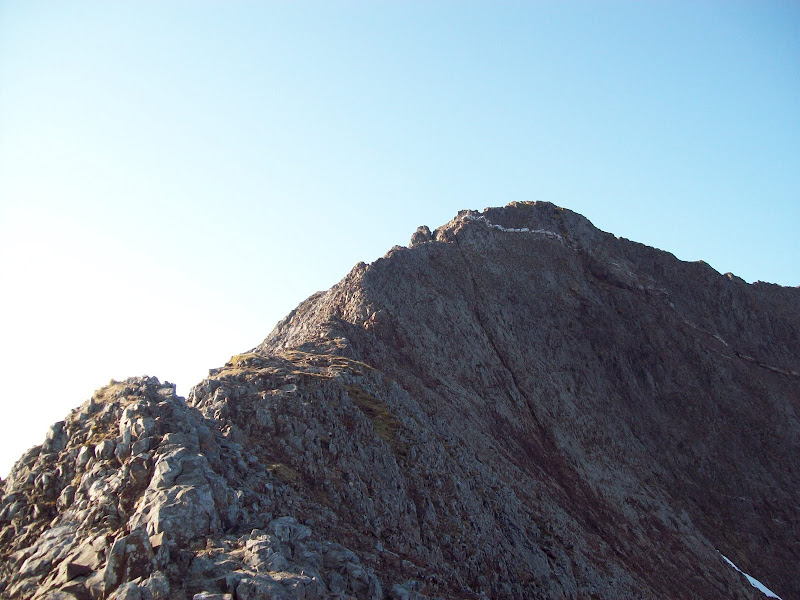 I reached the summit just after 9, and the views were excellent. A haze in the air limited the long distance views, but the classic Snowdon Horseshoe view was as good as it ever was. Low cloud floating around the Glyders and Moel Siabod added to the atmosphere. 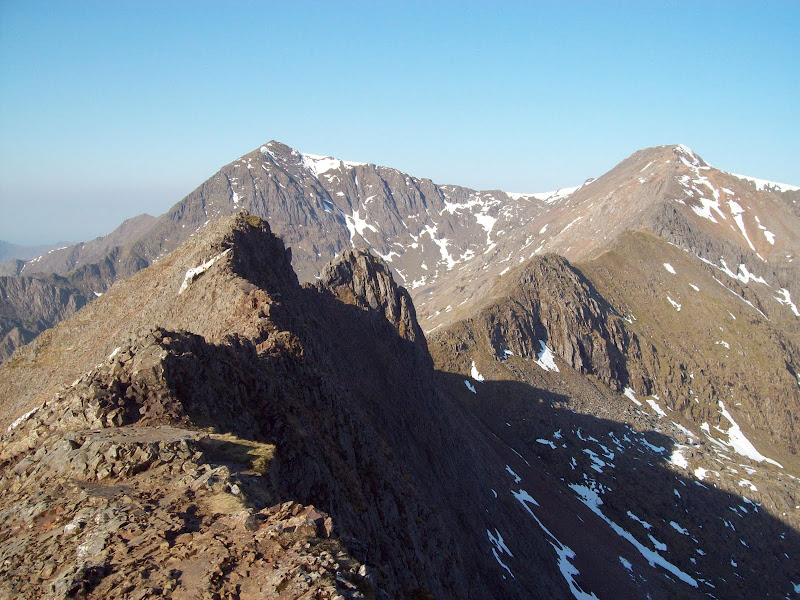 The ridge crossing was straightforward. A couple of other guys had arrived at the summit by the E ridge but I soon left them behind, using them as props in a couple of my photos. The memories of evening circuits of the Snowdon Horseshoe came flooding back, as did the most practical route around the Crib Goch pinnacles. I still can't remember this well enough to describe the best route, but it always comes back to me when I am there. 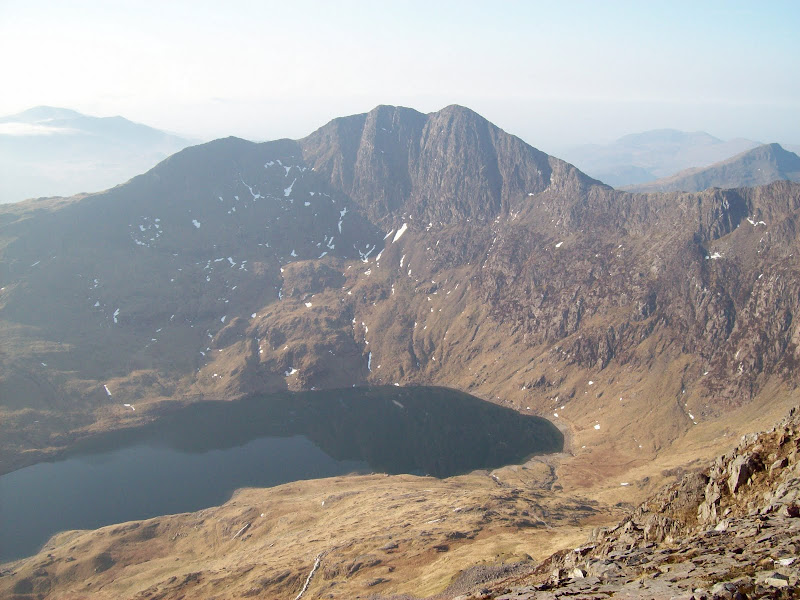 Back along summit ridge of Crib Goch: 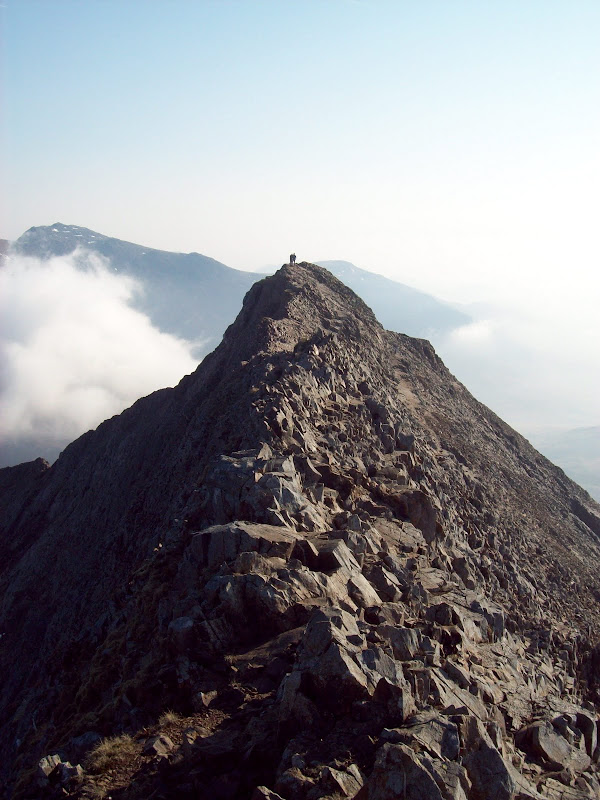 Crib y Ddysgl from the pinnacles: 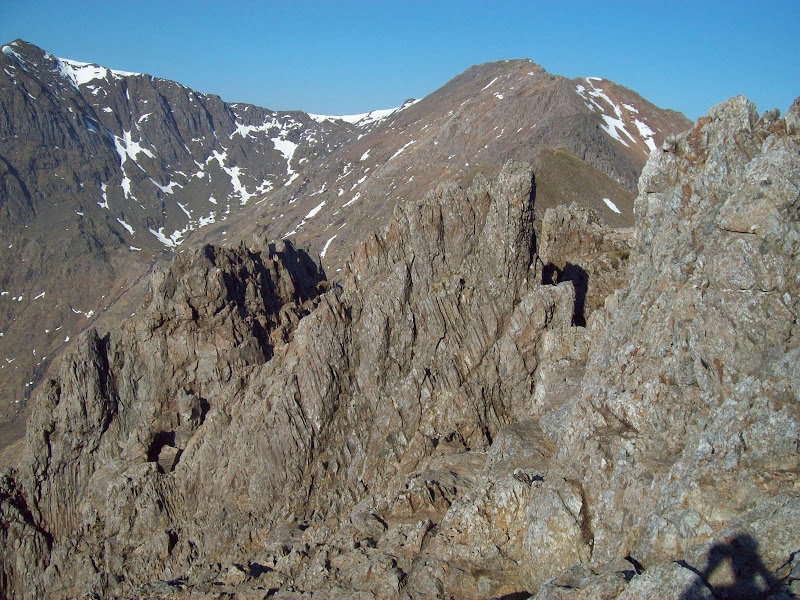 Ascending Crib y Ddysgl, the snow patches became more regular, with the occasional requirement to walk across a patch. Nothing you would call winter walking though. A scramble up the short step and a walk up the rest of the ridge brought me quickly to the summit. 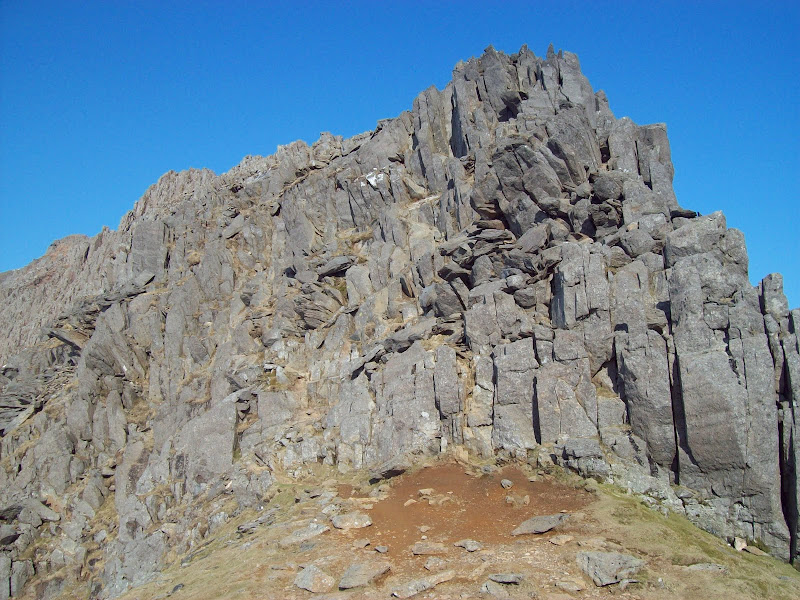 Looking back at Crib Goch: 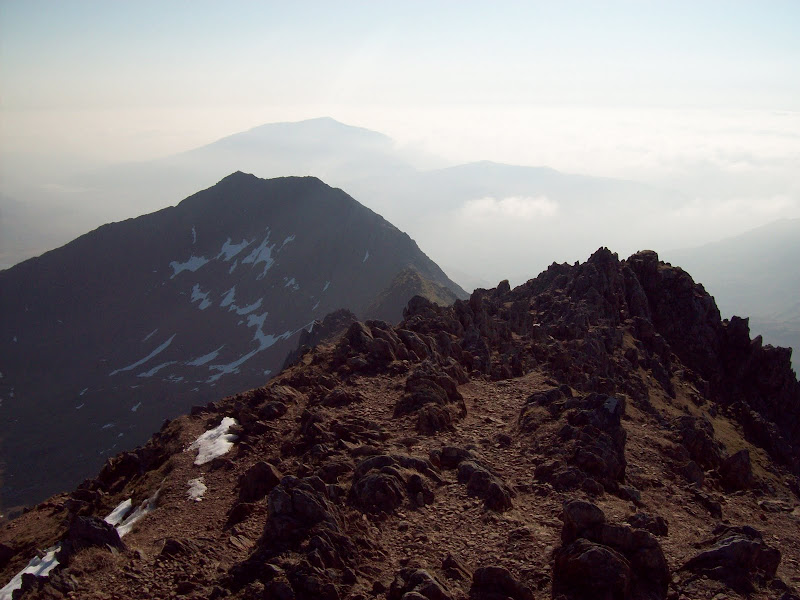 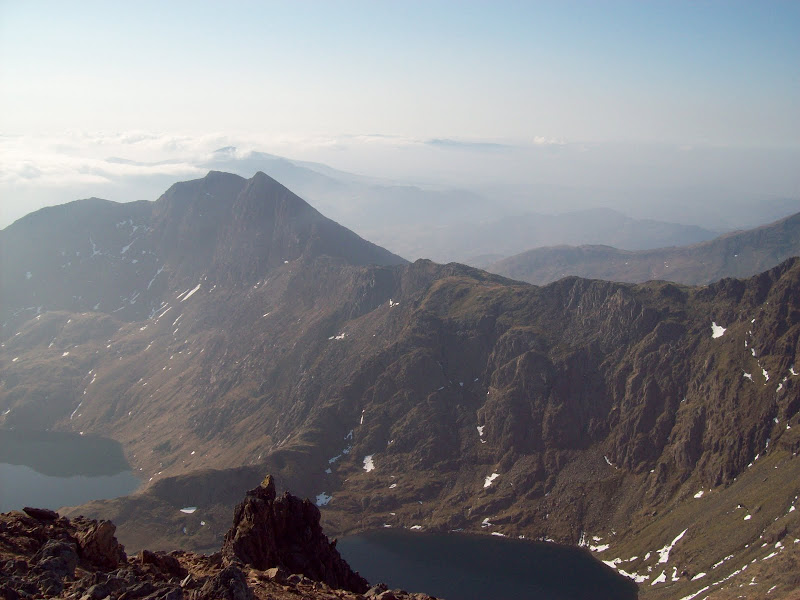 Across Y Garn and the Glyders to the Carneddau: 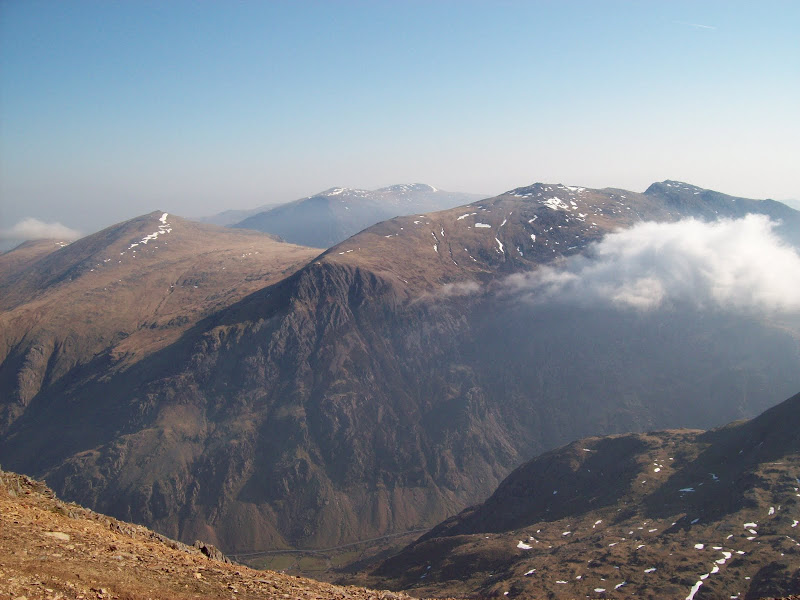 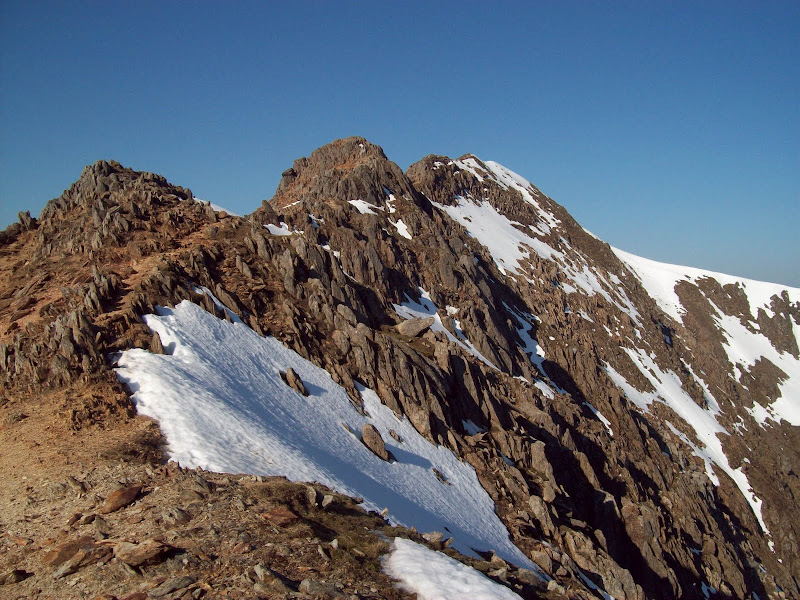 At this point I decided to carry on to Snowdon, as I had yet to see the new cafe at close quarters. This was also a short ascent, and at 10 I had the summit to myself. Another walker and his dog arrived while I was eating a second breakfast. The cafe was shut, but seemed an improvement on the previous building. Back to Bwlch Glas, and a steady trickle of walkers were beginning to approach the summit by the Llanberis path (possibly from the train, which was terminating at Clogwyn station). I contoured Crib y Ddysgl at the 1000m level and joined the edge of Cwm Glas. The wind here was biting.

Down the railway to Llyn Padarn: 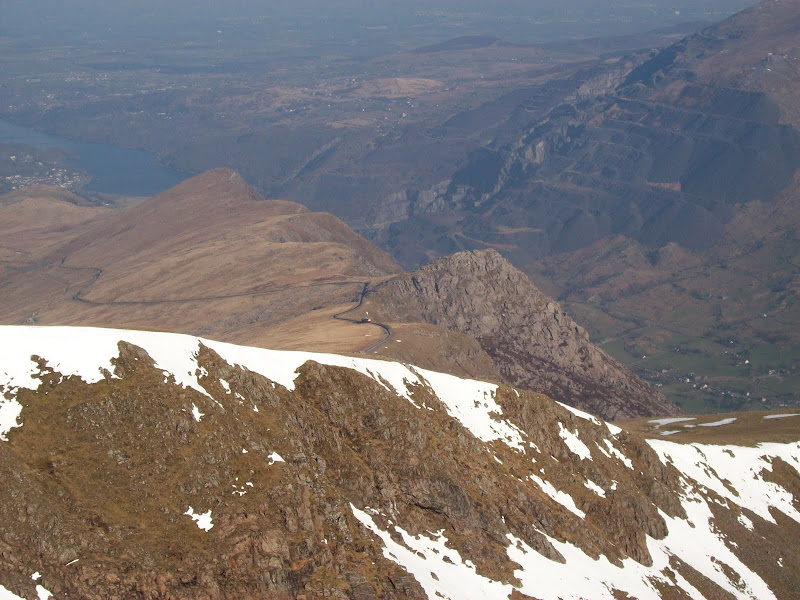 Back to Crib Goch: 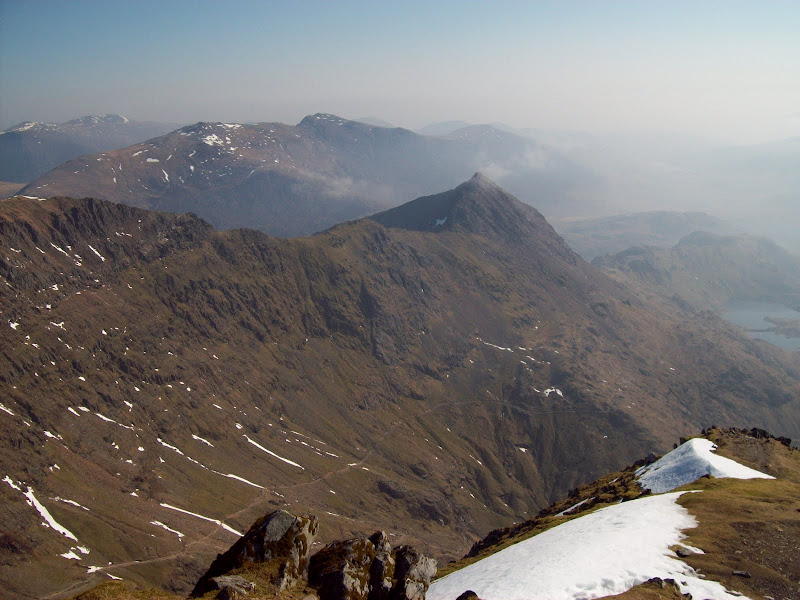 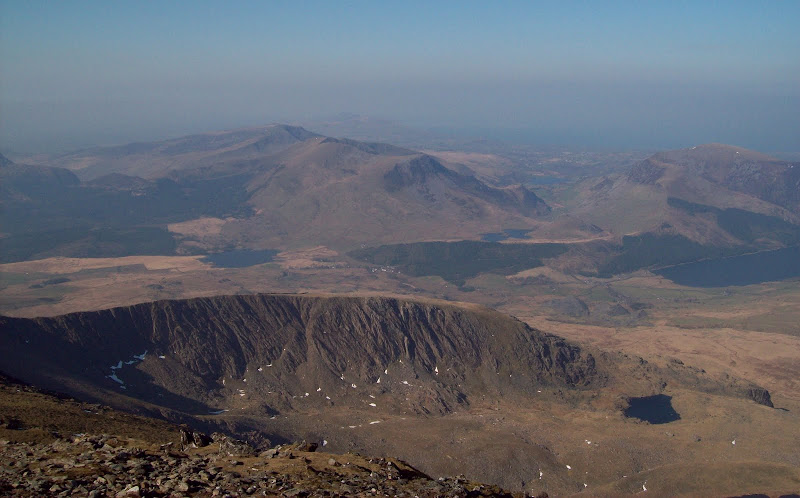 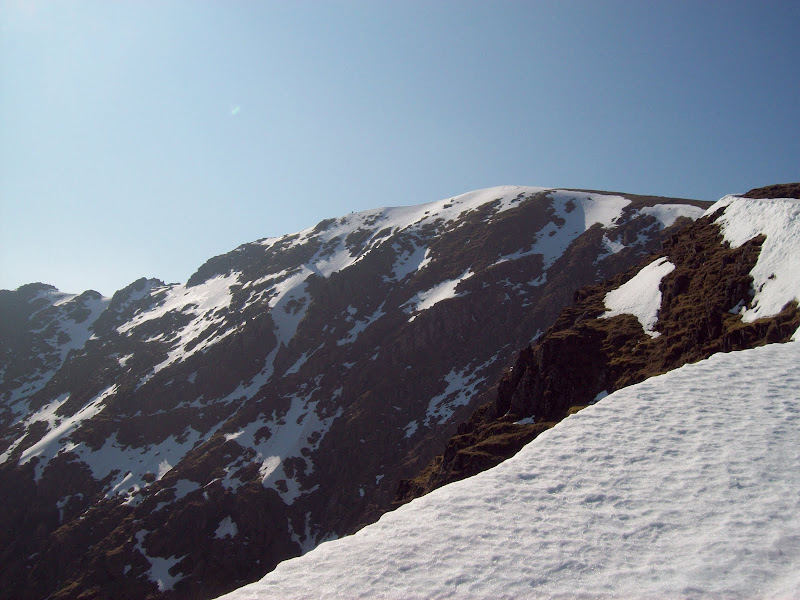 I was going to use Cyrn Las and the spur bounding the NW side of Cwm Glas to descend. A faint path headed off down this improbable looking route, but avoided all difficulties on the W side of the ridge. Below the overhang of Cyrn Las, a few sun-soaked grassy platforms made great viewpoints for Cwm Glas and the Clogwyn y Person arete. This is probably one of the best scrambles in Wales, almost like a mini Tower Ridge. However it is quite difficult, and I didn't really have the confidence to do it on my own, having had a few shaky moments on the crux in the past. Much recommended though if you enjoy the likes of Pinnacle Ridge in the Cuillin. 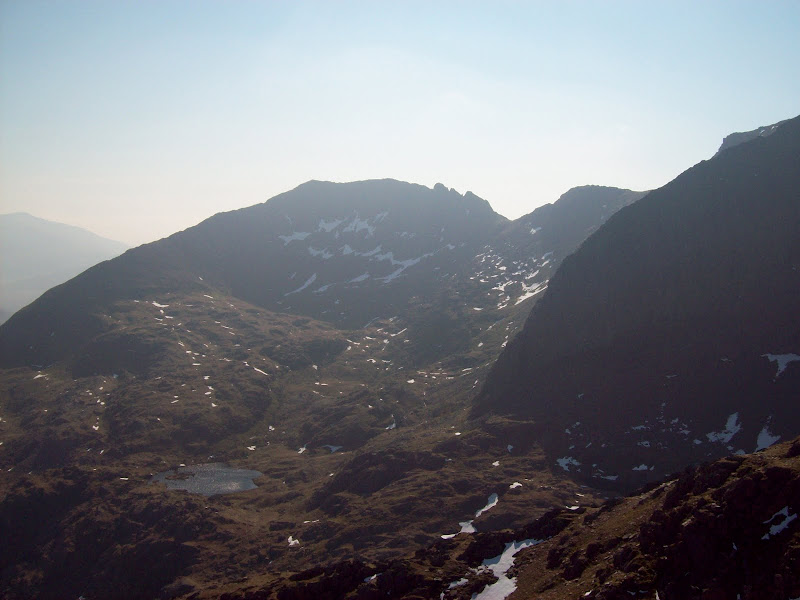 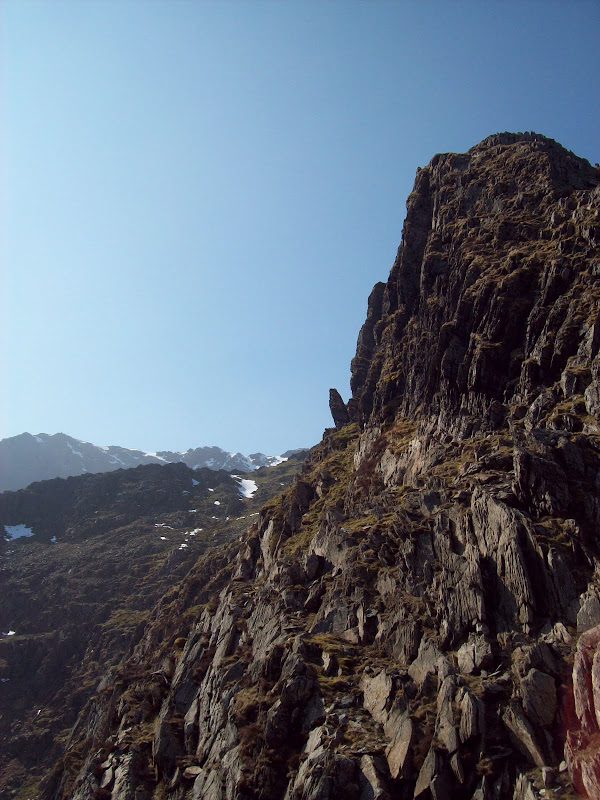 Another 20 minutes and I was back at the car, having had a brilliant morning out on one of my favourite parts of the Snowdon massif. Unfortunately it had to be followed with a trip to Warrington to trek round Ikea!

Superb report Malky, not yet done the ridge but I love the Snowdon area,thanks for some great pics, Sue

Lovely day for it Malky,its a long time since ive been over Crib Goch 8 years in fact,still looks very dramatic i must put it on the to do list for this year.

Ikea yuk. Thats payback for you

. Great report and pics. I did Snowdon Via crib goch Last Summer and the place was heaving. Cafe is good, more than likely pricy (I never looked) Good loos though and it would provide welcome respite if the weather turns. I said in my report Garnedd Ugain was my preferred resting place as it's much more peaceful. Snowdon in the summer is a G.U.S.O (Go Up Sod Off) summit in my book!!

Snowdon's usually fine in the week in summer... even better early evening! Great report and pics though... I'm ashamed to say that I didn't even get up to Cwm Glas as I found the last bit up the steep loose stuff a bit offputting and was on my own so came back down... it was pretty late in the evening anyway. But I was wanting to look at the ridge you took up onto Crib Goch as it looks easier to me for going up - probably loose coming down it though? A few of my friends in our climbing club based at Nant Peris said they were going to take me down the descent you've done there so thanks for those piccies too!

Cheers for the comments. I haven't done Crib Goch for years, but used to do the Snowdon Horseshoe every year as an evening after-school walk (didn't have to pay for parking at Pen Y Pass at that time of the day!)

Summit is a bit messy but was pleasantly quiet that time of the morning.

MC - N ridge is the easiest way onto Crib Goch. Bit of a scree slope at the start, but compared to hills around Glencoe and Glen Shiel, this isn't too bad. Also a bit of easy scrambling just before the summit (easier than the stuff on the E ridge). My personal view is that Crib Goch is easier than Tryfan, but it is definitely more exposed.

Cyrn Las is a bit steep, but again fairly comparable to the normal routes up Buachaille Etive Mor and Bidean (probably not as bad actually). The most awkward bit is a slightly loose gully which takes you down round the overhanging bit. This needs a short section of scrambling, but you are facing away from the exposed side of the ridge. Couple of photos: Ikea, yeah, bummer. Can't win them all though!

Good different and quiet route (and avoiding expensive Pan y pass carpark) to Crib Goch, quiet until you get to the ridge, as you will well know, which can be like trying to get into Ikea on a Bank holiday weekend, on a bank holiday weekend!

Welcome back to wales

Thanks for the extra pics... however, I'm having a really bad time with steep right now

so that second pic just made me go 'eeeek!'