our_route.gpx Open full screen  NB: Walkhighlands is not responsible for the accuracy of gpx files in users posts
It was a truly grim day in the mountains, so I abandoned all hope of a climb and decided to go to the seaside instead.
I’ve been to Wester Ross many times, and have stayed in places such as the delightful Mellon Udrigle, but I had not made it out as far as the point at Rubha Reidh and the isolated beach at Camus Mor.
It’s a good ten miles along the narrow coast road from Gairloch to Melvaig, and on a day like today this little settlement does feel truly isolated. Having read the guide, it would appear that that the public road ends at Melvaig, and the new owners are most particular about their privacy. I therefore left the car in the parking spot, and took to the bike. The road from here is quite up and down, and it really is bleak and exposed. After about a kilometre I came across the first of two bridges that really have seen better days, and I was now grateful I hadn’t chanced it in the car!
5 kilometres later the lighthouse of Rubha Reidh (which apparently means ‘Smooth Point’) comes into view and the road dips sharply downhill. Just on the bend there is a track which leads down to the jetty which looks like a right little smugglers cove! Just sitting on the rocks there, looking out over the Minch was delightful, even on a dark and damp day like today. Back to the top of the hill, lock the bike up and head off along the rather soggy path high up on the cliff tops. Despite being so close to the sea, it still feels like a moorland bog trot as the path climbs quite quickly to over a 100m.
After a kilometre or so, big seastacks come into view, one being a natural arch rising out of a crystal clear turquoise sea. This is the preserve of seals and seabirds, and their barking and calling echoes around the rocks. Up ahead you can glimpse the beach of Camus Mor beyond the headland. The path climbs yet further, and takes you inland over a shoulder of the hill above the smaller beach and to within sight of Camus Mor itself. There is a faint and at times exposed path that angles slightly downwards across the face of the steep slope above the beach. This path leads to the ruins of a small building on a narrow flat perch high above the bay. Just afterwards it is possible to scramble down the rubble of a steep stream bed to reach the beach itself about 3/4s of the way along. The outflow of the stream is clear on the picture below, the rubble scarring the clean sand. Ben More Coigach and Stac Pollaidh can also be seen in the distance. The beach itself is an idyllic place. There wasn’t a soul about, and the only tracks in the fine sand were mine. Despite the occasional bursts of rain, this was a place to just sit and look. All too soon it was time to go, retracing my steps up the stiff clamber back to top of the cliffs. 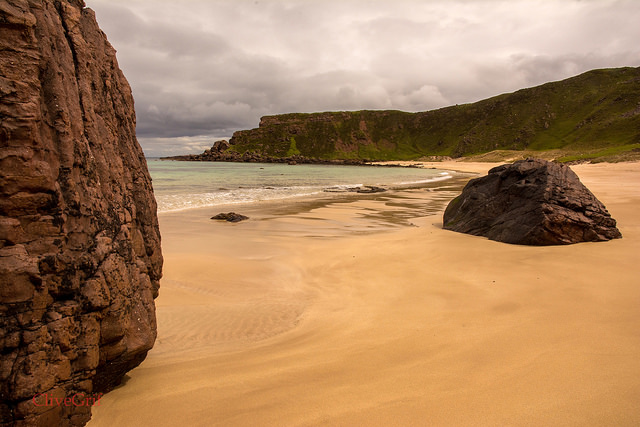 As the weather wasn’t great I decided to give the diversion to the masts on Maol Breac a miss, though on a fine day the views from up there would probably be well worth the effort.
Heading back down the road, I was now riding into the teeth of the wind and it was hard going. I was also able to confirm that the residents of the lighthouse don’t have much time for tourists – I hadn’t heard her approaching because of the wind, but a lady in her 4X4 came right up behind me and gave a loud blast on the horn to make me shift out of the way! Patience is a virtue….
So, it might not have been a good mountain day, but this was a worthwhile trip out and I would thoroughly recommend it if solitude and isolation appeals to you.

As a little postscript, on the way back down to Torridon I called in at the Victoria Falls which are just off the A832 near Slatterdale, alongside Loch Maree. These falls are very accessible, only a hundred metres or so off the main road, and are quite lovely. A nice way to spend a day when the weather limits your options. Your photo Camas Mor 1 is superb, well done!

We did this walk last year - fantastic stretch of coast

We didn't climb to the mast either, the day was wet and we didn't fancy the boggy trudge up, but the views towards Assynt hills are superb even from lower levels. Not to mention the sea stacks and the beach.

Thanks both, it may be heresy on a site like this, but just perhaps there is more to going to Scotland than just climbing hills!

Never thought I would say that

I did have a read of your report BlackPanther, really enjoyable read, and a whole series of great pictures.

Wow, fantastic! I've done quite a few coastal walks up that way, but not that one - looks really good.

Re Victoria Falls, I've heard it said that the split in the burn at NG885676 (which you pass on the way to Beinn an Eoin) was created deliberately to increase the flow of water over the falls, but I don't know if that's true or not.

Looks like an amazing walk. Fabulous photos of the falls and the beach. The weather is a mixed blessing - when poor, the beaches are deserted!