Munros Ninety One to Ninety Four

Munros Ninety One to Ninety Four


23rd. October, 2007:
After a drive up from Whitby and a late rendezvous with Friend Toddy in Fortingall on the previous afternoon, we had camped high after crossing Creag Mhor and began our second day of a circuit of the lower end of Glen Lyon at an early hour.

our_route.gpx Open full screen  NB: Walkhighlands is not responsible for the accuracy of gpx files in users posts
Easy slopes in fresh, misty weather led up onto Carn Mairg and the ridge then led on straightforwardly over Meall Garbh and Carn Gorm. 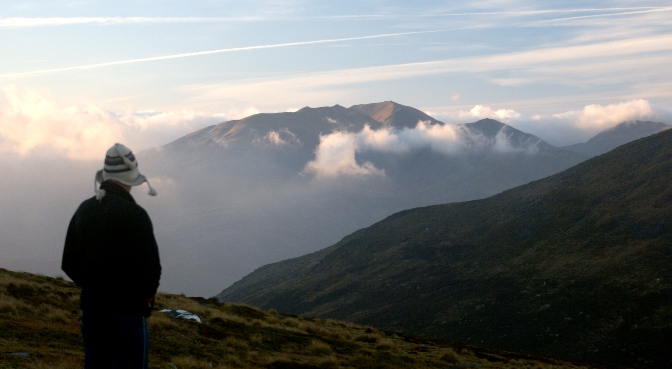 The terrain then became less trodden as we continued to head west, crossing Beinn Dearg before descending almost to valley level north of Innerwick for a bite to eat in open pine woodland. A bit of a grind up a track to the north west then led us to the slopes of Meall nam Meagheach and then we traversed Cam-Chreag before crossing peat hags to the eastern slopes of Meall Buidhe. We left our heavy sacks on the lower part of the ridge before running up to the summit and back and descending to the northern shore of Loch an Daimh and a tolerable campsite.
It had been a longish but satisfying day.
Next Report: https://www.walkhighlands.co.uk/Forum/viewtopic.php?f=9&t=77485.