Following on from our trip to Blair Atholl a couple of weeks before, we headed up to Drumochter on Sunday to attempt the 4 Munros on the west side of the A9. The forecast was looking good, a bit of low cloud in the morning and early afternoon, but clearing as the day progressed.
We arrived at Balsporran at 9am, a 3hr drive from Hawick, and we set off at 9.15. We crossed the railway line and headed off up the track, this looked quite new and I hoped this was replacing the boggy path that I'd read about, unfortunately, after about half a mile or so, the good track just stopped and the bog started here! I'm in dire need of a new pair of boots, the soles are fine (I had them re-soled last year!) but the uppers have developed a few holes, and of course these let in water as soon as I set foot on the bog...wet feet for the remaining 15 and a half miles...great! (it didn't bother me that much really!) A'Mharconaich and Sgairneach Mhor, behind to the left, with their heads in the clouds, from the car park. 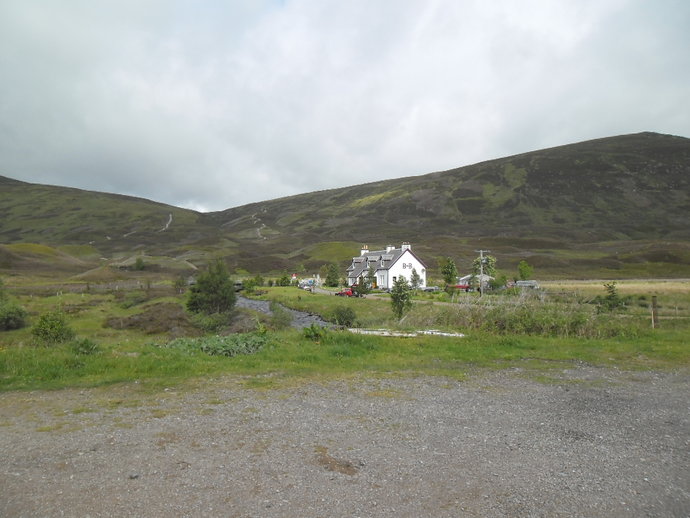 Balsporran Cottages, the start of the walk. 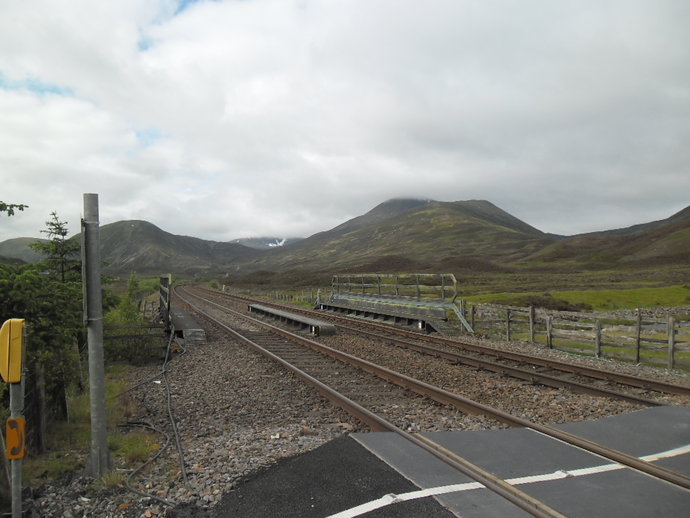 Looking back to the cottages and the car park. The good path suddenly stopped and was replaced by a quagmire! Looking south along the pass and A9. Dwarf Cornel on the descent from Geal Charn. The path down Geal Charn meets this track, Beinn Udlamain at the back on the right.

We reached the summit of Geal Charn in about an hour and 15 mins, had a quick bite to eat and set off towards A'Mharconaich, which up to now had been shrouded in cloud, this started to clear as we made our way up the path to the plateau, and we had decent views when we reached the cairn. Summit plateau and cairn on A'Mharconaich

Another quick refuel, and then on to Beinn Udlamain following the occasional rusty fence posts down to, and back up from the bealach, the summit is another rounded plateau, with a large cairn with some rusty fenceposts. We met a fellow walker and his dog, who'd come across from Sgairneach Mhor, it turned out that Malcolm knew him as he used to live in the Borders but had moved up to Inverness, (it's a small world!) he worked for the RSPB, both in the Borders and up north, we had a brief chat about birds, and went on our way, first down the quite steep rocky southern side of Udlamain, and then up the gentler, grassy slopes of Sgairneach Mhor. Loch Ericht from Beinn Udlamain, Ben Alder at the back in cloud.

We must have strayed slightly from the path as we found ourselves approaching a small cairn which we assumed was, or near the summit, but as we approached it we could see the actual summit away over to our right! The soft grassy/mossy surface was a delight to walk on, even with my sodden feet! The summit was reached and another bite to eat! A motley crew at the summit of Sgairneach Mhor Panorama from Sgairneach Mhor, Schiehallion and the Lawers Range in the distance. Snow in the corrie on the east side of Sgairneach Mhor.

I suggested an attempt on the Sow of Atholl as we were heading in that direction, but it was rejected in favour of "just getting back to the car!"...fair enough, I wasn't THAT bothered! We followed the path round the crags, and started to descend over some quite boggy areas, eventually reaching a good track and a bridge over the burn. we followed this track up to the A9, and walked the last couple of miles along the cycle path, back to Balsporran. Malcolm on the descent path. Quit boggy in parts this one! The decent track at last!! Good to be clear of the bog! After about a mile and a half of trudging along the path by the A9, Balsporran comes into sight! YAY!!

Being a keen birder, I try to take my binoculars with me on my walks, but I didn't this time as I hadn't seen much on my previous outings. Sightings of Short Eared Owl, lots of Golden Plover, Ptramigan (I almost stood on a chick near the top of Geal Charn, it was so well camouflaged!) , Kestrel, Dunlin, Raven, Whinchat, a single Dotterel, and several Mountain Hare, all told me I should've brought them! Malcolm had brought his, so I managed some decent views of some of them using his pair!
I really enjoyed these four, relatively easy going, the walk back to Balsporran along the A9, did spoil it a wee bit, but it was over quite quickly (an hour!) so no real problem, the wildlife was a great added bonus, a few year ticks for me and a life tick in the Dotterel, I went home happy!