My mum was quite keen to do her next leg of the Great Glen Way (Invermoriston to Drumnadrochit) so we dropped her off at Invermoriston. Dad was initially wanting to go up Meall Fuar Mhonaidh again, but I managed to divert him onto Burach instead. He was initially sceptical about this, but ended up enjoying it (mostly).

Burach.gpx Open full screen  NB: Walkhighlands is not responsible for the accuracy of gpx files in users posts
We parked at the Allt na Criche forestry carpark and headed up the trail. This soon became a super new forestry walk - one with little regard for aesthetics. At the upper forestry track, a section of the path we wanted to follow was being upgraded, and was fenced off, so we followed the forestry track south west, rising gently. 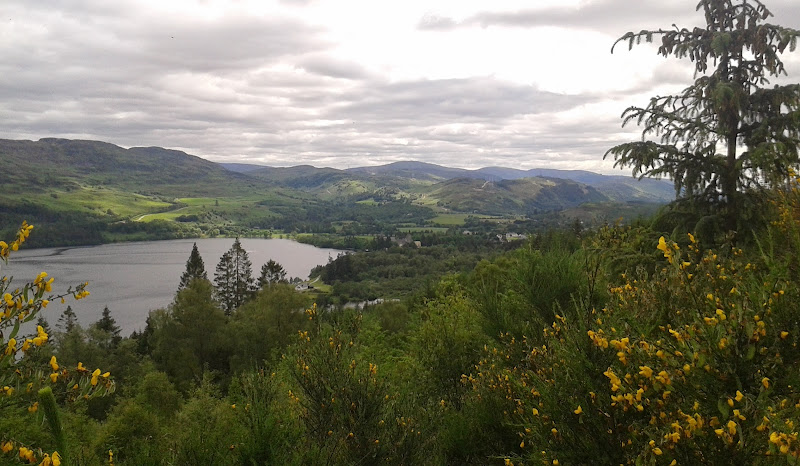 This was a slight change in plan, and we hadn't really thought it through. Soon enough we stumbled on a cairn marking a route up a fire break, so we followed this onto the open hillside. 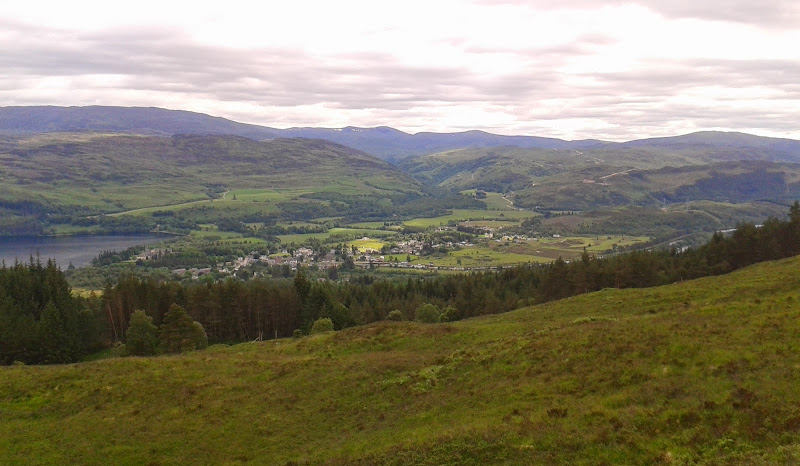 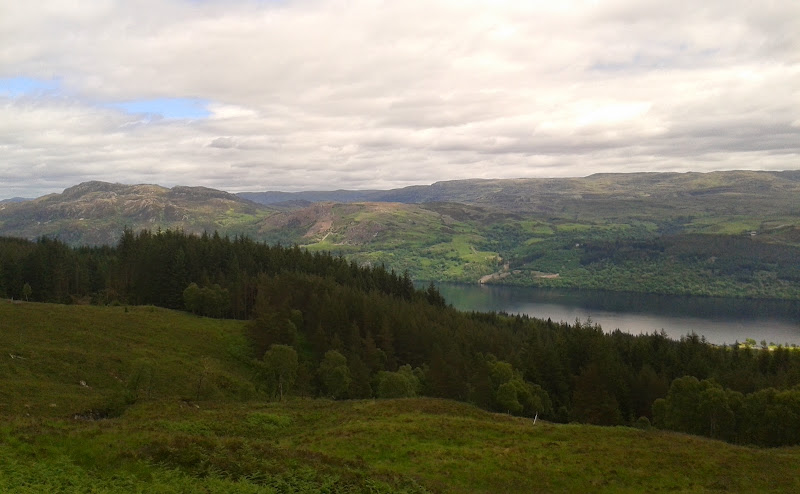 After an initial steep section, we were on the upper hill, which was a little rough. We argued briefly about the merits of sticking to a spur vs. heading directly to the summit. I didn't think any of the spurs were well defined enough to giver any advantage. We headed straight for the summit area, avoiding the southwestern end of the Burach ridge. Might have been a pleasant traverse but I didn't think we would have time for it at the rate we were moving. 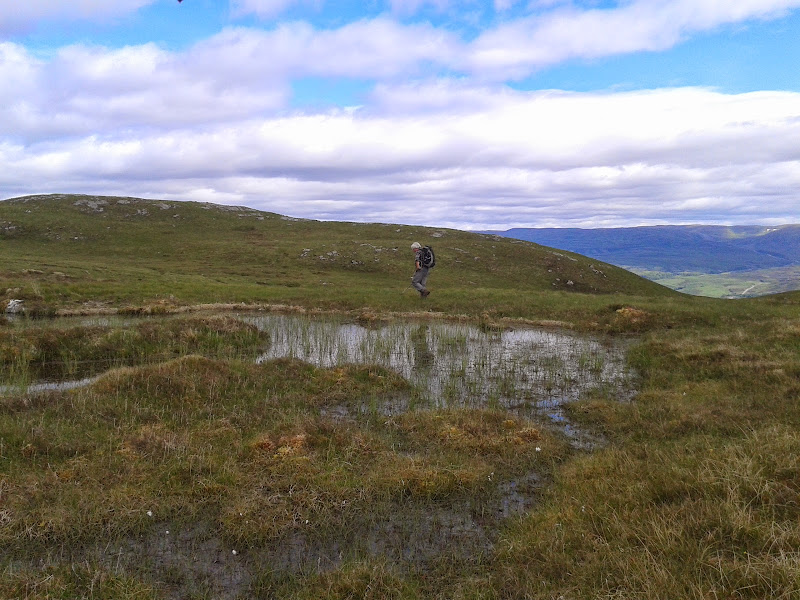 Once at the 'summit' we discovered that the highest point was a good bit further on. I enjoyed this traverse past crags and lochans, but dad was starting to tire a bit. Even he agreed that the views were much better than expected though, especially down the Great Glen and along Glen Moriston. 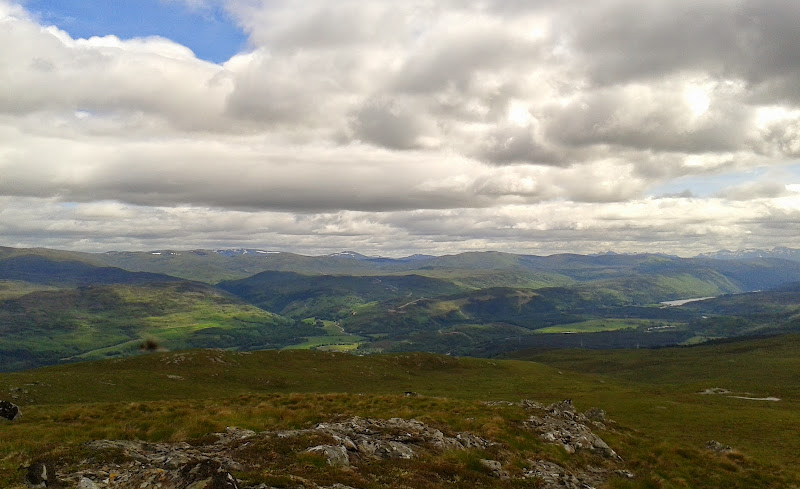 Lochans near the summit: 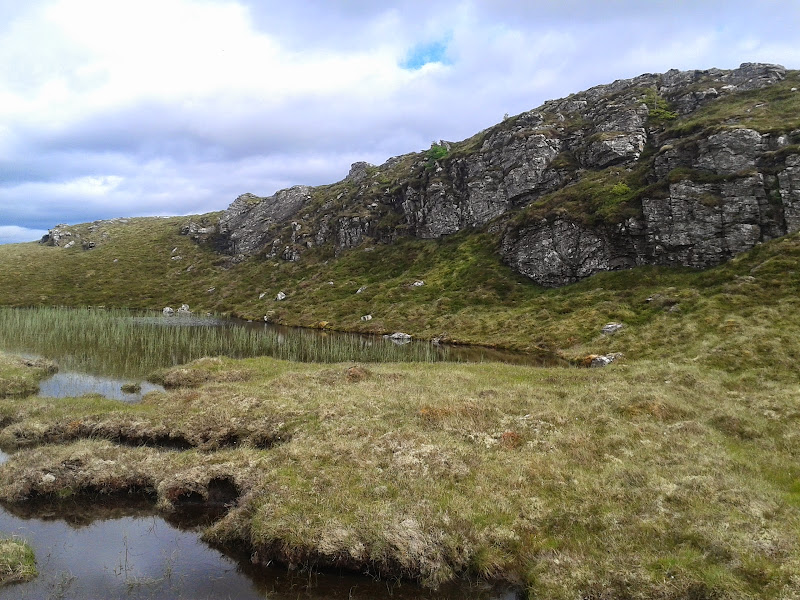 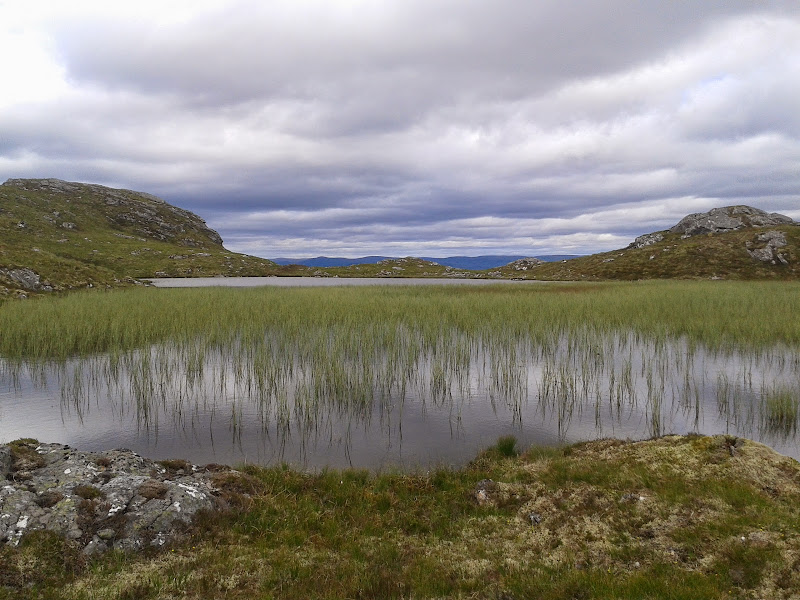 There was a sizeable cairn on the summit, and nice views of Meall Fuar Mhonaidh, although less of Loch Ness in view than I had expected. Eventually we found a spot with enough of a breeze to calm the flies. 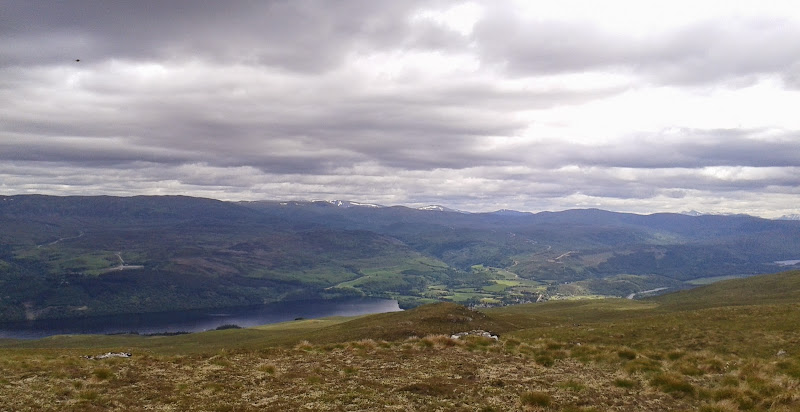 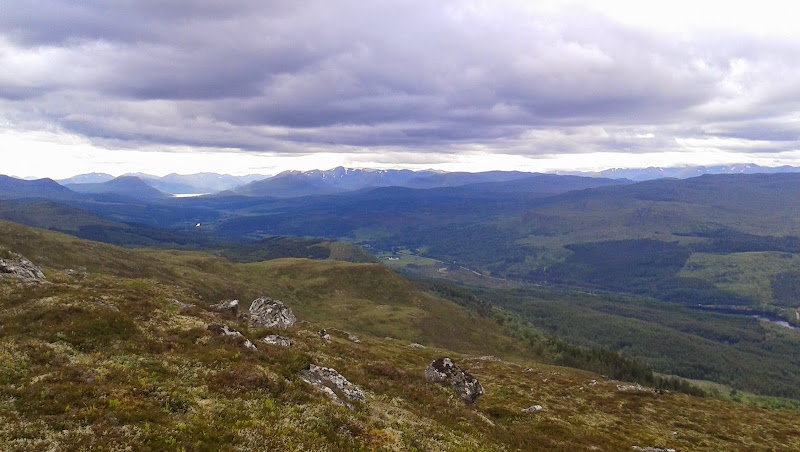 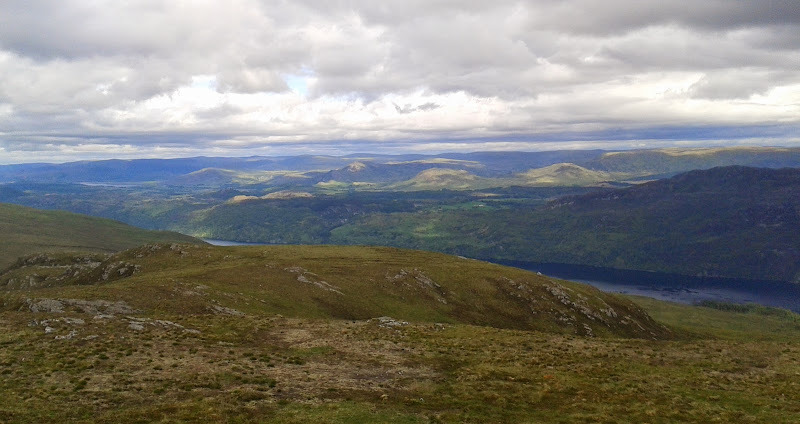 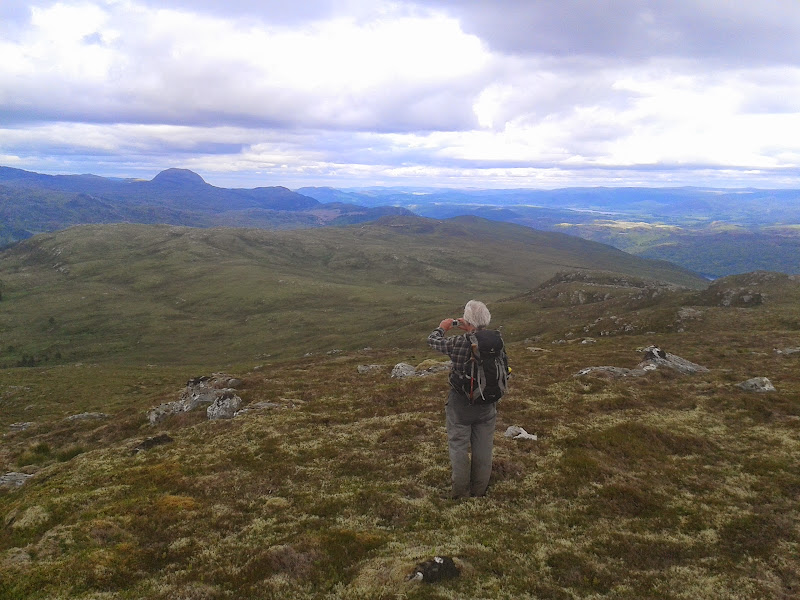 We decided to take the direct route home, which is the way we'd actually planned to come up. As it was after 5pm, we didn't think we'd be interrupting any path workers. We made a descending traverse to the Allt na Criche, which was rough in places, but fairly fast. There was some nice coloured moss along the way to enliven things.

Loch Ness and Bheinn a Bhachaidh: 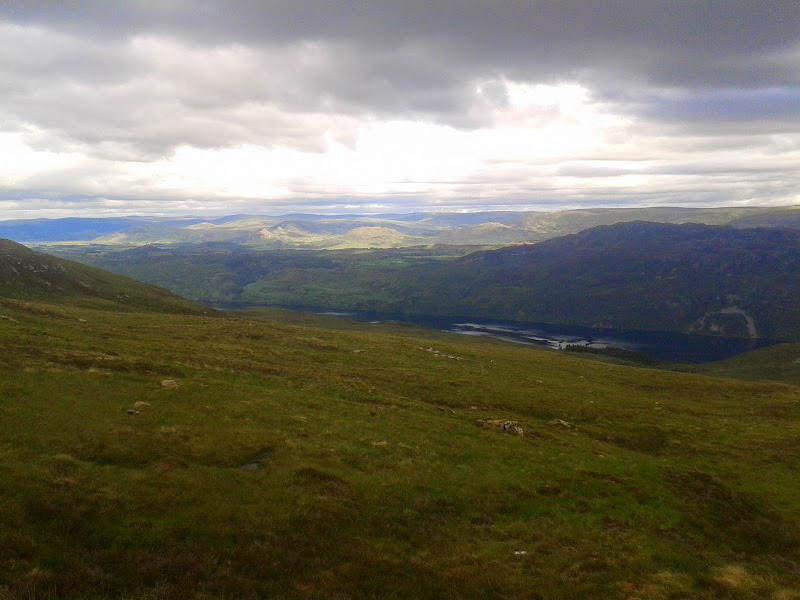 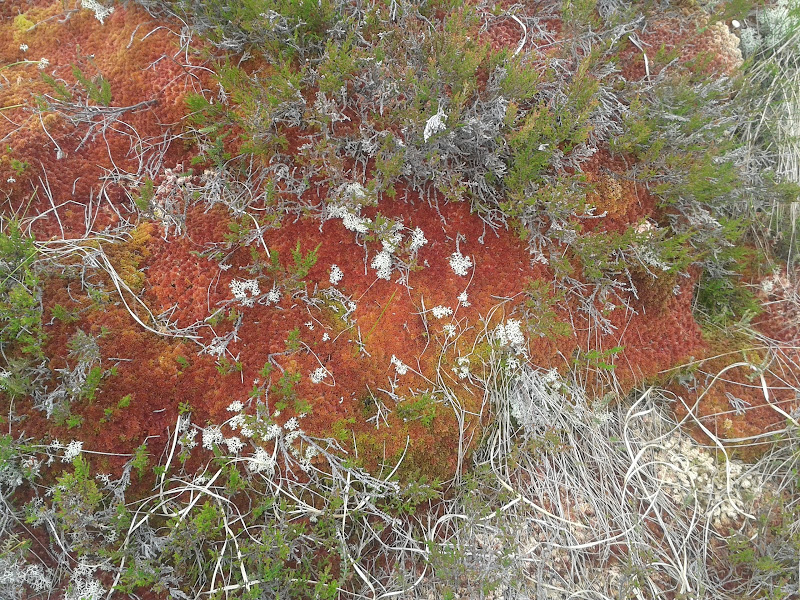 The traditional marker of the route up Buarach is a couple of old tables just above the forest. We found these eventually, but they had either collapsed in the winter gales or been destroyed. It seemed that the path building had come a lot higher than the original path did, making a new route above the trees, dropping back down into the forest a couple of miles north east. Maybe it will form a new section of Great Glen way? I hope so, as it provides much better views than the current route.

The restaurant of Burach is no more: 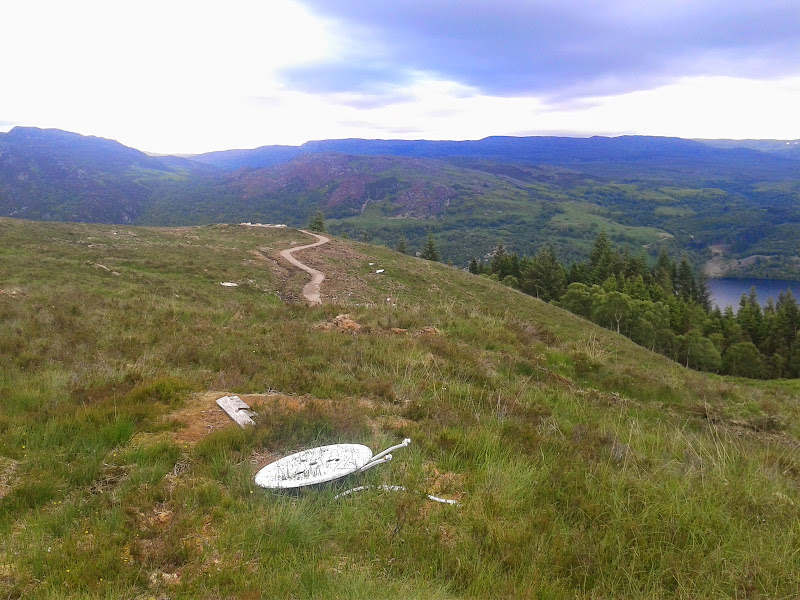 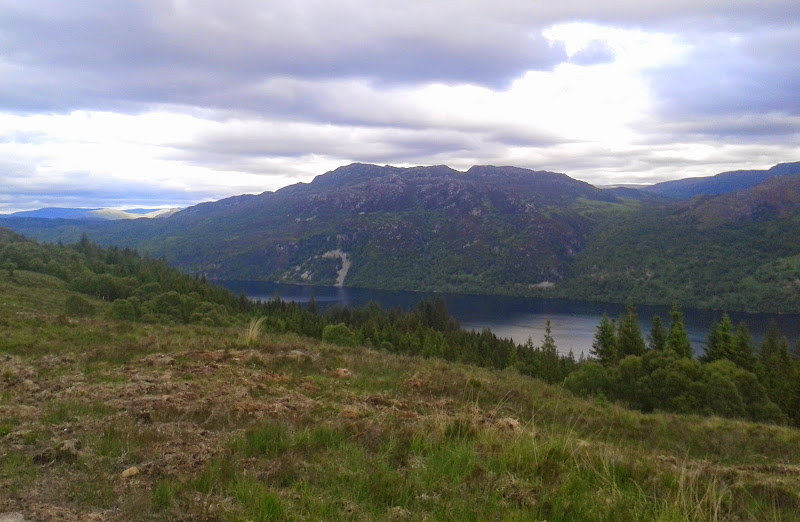 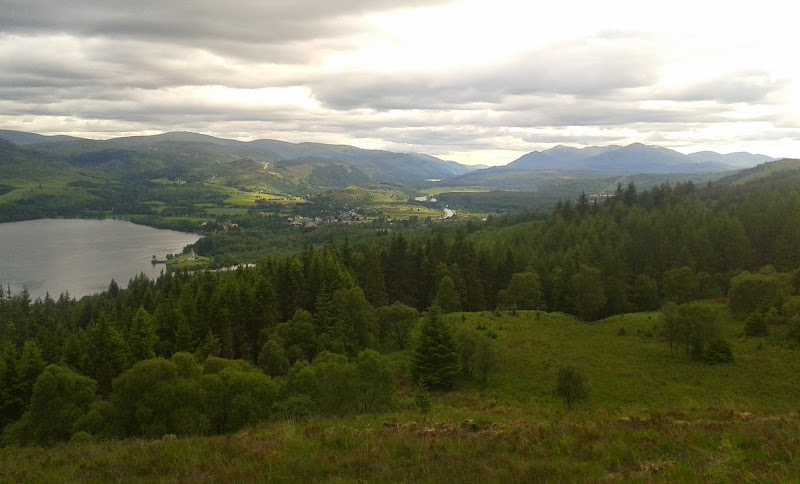 We picked up the new path and followed it down through zigzags back to the barrier we had seen on the way up. Parts of it were unfinished, but there were no workmen out at this time of the evening. Then down to the car. I think Dad was a bit hacked off with the extra ridge traversing we did, but enjoyed it overall. Which was more than he was expecting from 'those nondescript lumpy things you always seem to want to walk over'. 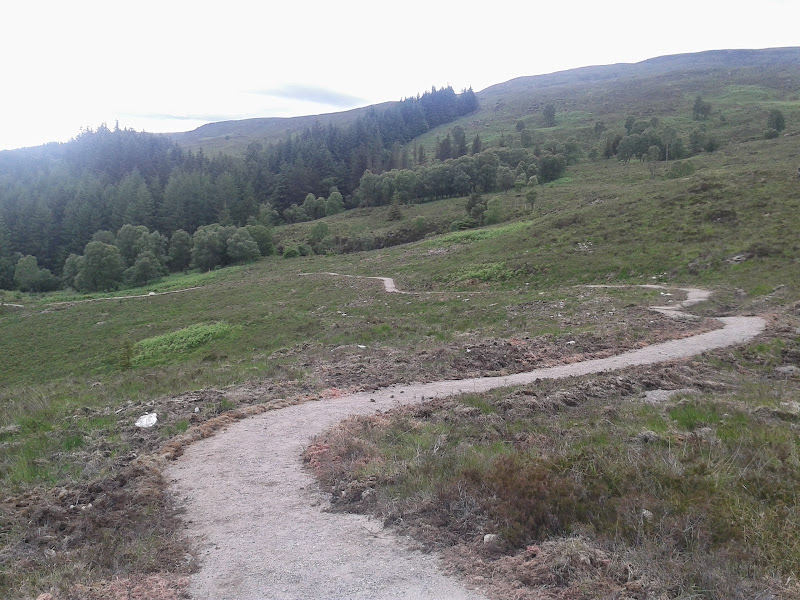 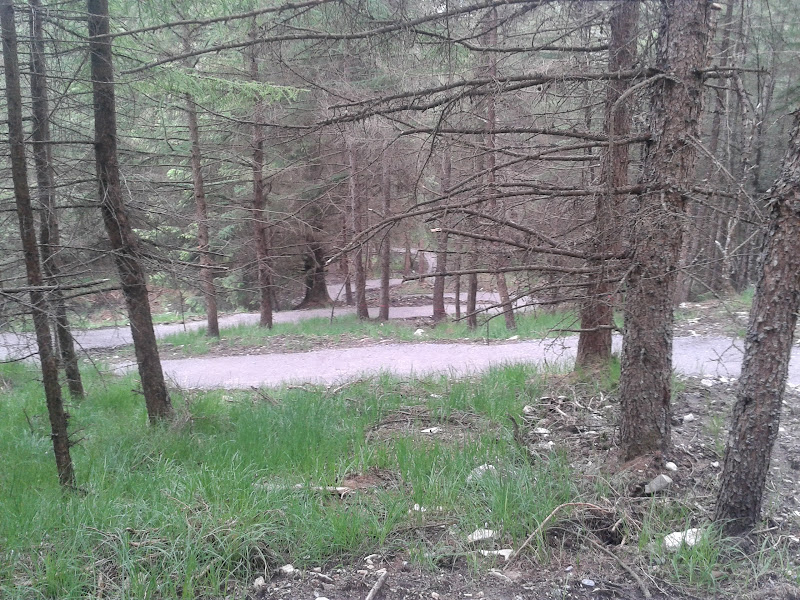 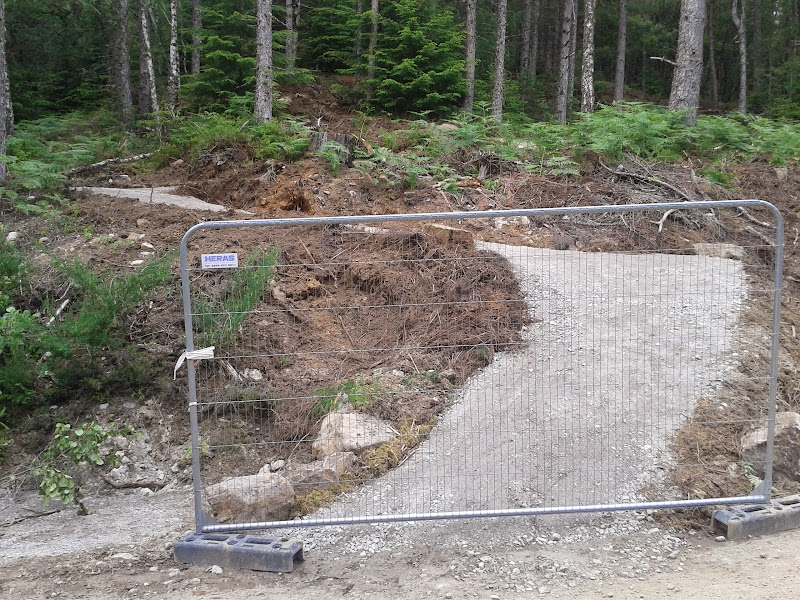 Then we picked mum up from the road above Drumnadrochit and headed to the Fiddlers for dinner with Gill. The Fiddlers restaurant adheres to the tartan touristy vibe of most things in Drumnadrochit, but I've always had an excellent meal there, and would highly recommend it.