Wondering what to do this weekend, and my mate Donald called me on Saturday evening saying he planned to do a couple of Grahams down Glen Moriston way. Quick look at the map and I was in, as I'd looked at these previously but not really decided which route was best. We were going to use bikes on the Hydro track to save time.

our_route.gpx Open full screen  NB: Walkhighlands is not responsible for the accuracy of gpx files in users posts
We left Blaraidh at 10.20 and pulled our way up to Loch Liath. The track was well surfaced and the gradient was reasonable, but it was still a fair slog. View back from Blaraidh Reservoir After 50 minutes or so, we were setting off across the bog on foot towards Carn Mhic an Toisich. This was wet in parts, and we partly contoured around Carn na Caorach, arriving at the summit in 45 minutes. There was a chill in the air and a lot of low cloud to the SW (over Knoydart), but the views were extensive and best over towards the Affric hills. An occasional flake of snow accompanied us on the trek back to the bikes. Across Loch Liath to Meall a Chrathaich, Meall Fuar Mhonaidh on R Affric hills and Glen Affric from Carn Mhic an Toisich A short pedal up to Loch ma Stac and we were off on the second part of the walk. The approach to this was slightly less boggy, and we contoured the 632m subsidary summit to gain the S end of the short summit ridge of Meall na Chrathaich. The views were better than from the first hill over the craggy and intricate area between here and Meall Fuar Mhonaidh. Ben Nevis and the Anoachs could also be spotted. Affric hills from Meall a Chrathaich S to Ben Nevis and the Anoachs Towards Knoydart and Loch Arkaig hills

The summit made another nice stopping point , with a view down to the curious ruin on the shores of Loch ma Stac. Anyone know what this is? Here's a closer photo from Geograph: http://www.geograph.org.uk/photo/393883. Another short walk back to the bikes and all that remained was a rapid descent to the car. We stopped briefly at the ford over the Allt Blaraidh to take photos, then flew on down. 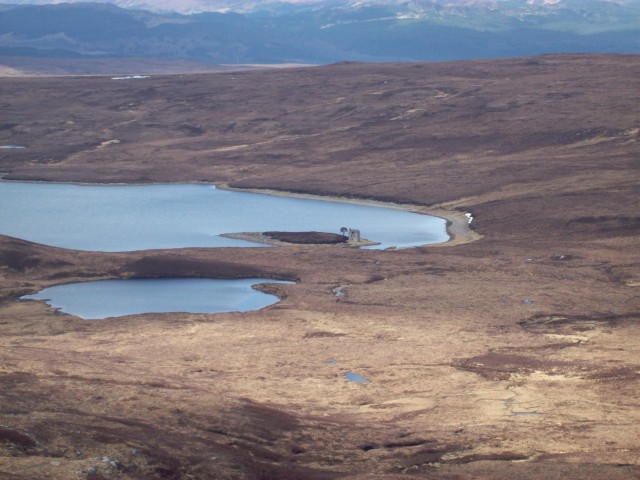 These hills were typical of a lot of Grahams - not especially interesting in themselves, but persuading you into areas you would not otherwise think of visiting and offering really good views of the more popular hills.

Looked at doing those from Glen Affric before but not got around to them yet.

Some big white hills in the distance

Forgot to mention the snow! From what I could see on the Strathconon hills first thing in the morning, I was fully expecting to be in fresh snow from about 550m upward. While it may have made the pictures more interesting, I was quite glad there wasn't any on these hills.

I'd imagine these hills are a fairly similar walk from the N. The track up to Loch ma Stac from this side doesn't look anywhere near as substantial as the hydro track, but that may well add to the appeal if you aren't cycling. If you're planning a longer traverse over Carn a Chaochain as well, then best of luck to you (and I hope the ground is well frozen

The building at Loch ma Stac is an unusual - perhaps unique - boathouse/shooting box. The level of the loch has fallen since it has become part of the Glenmoriston hydro system, but as originally designed the ground floor was at water level and was the boathouse, with two stories of accommodation above.